June 18, 2015
for the last time, cosmetics industry, i am just fine with the colour of my skin.

that's not a joke about rachel dolezal, either. it's a commentary on the cosmetic industry obsession that i should be worried about making my skin look bronzed and golden for the summer. it's not a look that has ever appealed to me, because when i put on bronzer, i look like i have dirt on my face. there's a range of shades from rusty prince edward island soil-type dirt to working in the garden brown dirt to ochre-gold smeared some fancy mustard on my face kind of dirt, but as a rule, having a dirty face isn't a look i go for. [and that's not to say it doesn't look good on other people. although i think there is a tendency to go too far with the bronzing trend, a lot of people look wonderful with a warm, sunny glow. just not me.]

i have purchased a few bronzing products in my time, but they tend to be ones that have some pink in them, like the guerlain terra indigo powder from a few years back. since i'd had a good experience with them, i let myself be tempted into purchasing one of their new joile teint powders, which is sort of like a bronzer for people who don't like to bronze.

its magic lies in the fact that the majority of the product is more a warm beige than brown, orange or gold, and along one side there's a tiny sliver of coral-pink. there are four shades, two labeled blonde and two labeled brunette, which is just a way of distinguishing lighter from darker. never use your hair colour to determine what product you should buy. it's all about what looks good on your skin.


i got the lightest shade, called "blonde clair 00". i've read reviews where people have said that the colour payoff on these powders is on the light side. i'm not convinced that it's the colour payoff that's lacking, although, like a lot of guerlain cheek products, they swatch terribly. applied with a brush, i found that i had no trouble getting plenty of colour. it's just that all four of these powders are very light compared to how you'd normally think of a bronzing product. but guerlain doesn't market these as bronzers, but as "healthy glow" powders. one could, in theory, use the product all over the face [although you'd want to avoid the coral-pink part if you're doing so], but it's much to dark for me to do that. this works best for me as a soft, warm, natural blush. it can run more pink if i swish the brush around in the coloured sliver, or warmer if i don't. the point is that it never develops that dirty look, but, as promised, just a happy, healthy glow. it's way better than i look when i have an actual tan, which is really just another shade of dirt-face.

i've swatched both colours separately here, although the sliver of coral is so thin that you could never use it alone. i couldn't even isolate it entirely using my finger, so unless you like to apply cheek products with an eyeliner brush, you won't see the coral on its own. but that's not the point. the coral is there to give a slight pink flush to the overall colour, which makes it more skin-like. you can use a little more or a little less depending on how much you concentrate your brush-swooshing in one area, or you can easily skip that part altogether and just use the beige side. even that isn't like a full-on bronzing effect. just a soft, "i am this perfect naturally" glow.


here's a comparison with hourglass "dim light" and "radiant light", to give you an idea of the difference. i really don't have a product that comes close to matching this. it's a similar idea to the estée lauder sea star powder [which is a bronzing/ blush product i like], but blonde clair is a lot lighter and not as warm.


along with its colour-and-warmth-adding properties, the powder also helps minimise the appearance of pores and unevenness in the skin, which is always welcome on my face. and the powder is very finely milled, so that it doesn't look, well, powdery. it's got a very smooth, satiny finish. i'd heard reports that some shades are shimmery, but "blonde clair" is nearly matte.  there's a very subtle luminosity to it, but nothing more. i personally like that, because my skin does not need help glowing in warm weather. the wear time seems good, but i must admit that i often have difficulty determining at what point cheek products have really faded on me, even ones that aren't as subtle as this. wearing it through the day, i thought it faded just enough that i wanted to touch up before going out in the evening, but it wasn't 100% necessary.

i think that this would make a nice "no makeup" pairing with guerlain's baby glow, another new product that came out with their spring collection. it's a luminous base product, something intended for dryer skin, but i think it could also function as a light tinted moisturizer, if you're not looking for too much coverage. although, as i mentioned, i don't need help in the glow department, i tried a sample and i did like the effect on my skin, even used alone. there is definitely a pearly finish, but it's not so shimmery that you look like a twilight character. here's a look at it. i'm wearing under eye concealer, but on the rest of my face, it's just the baby glow i've used as foundation. [to get an idea of the colour, you can see a swatch here.] 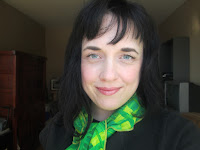 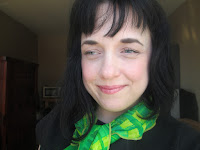 unfortunately, even the lighter of the two shades available is a bit too dark and pink on me. it's not really visible in the photos above, but the pink-ness makes me look a little feverish. for the moment, i've decided not to go for a full size version.

although it's a bit subtle, i think this look gives you an idea of what the jolie teint powder looks like and why i'm suddenly so fond of it. 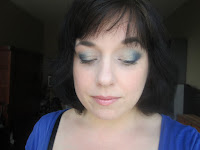 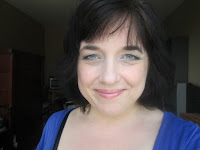 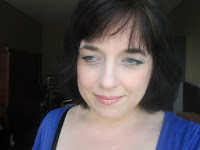 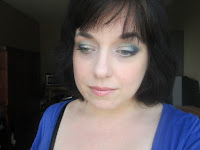 the jolie teint powders are, as i understand it, becoming part of the guerlain permanent collection, which is exactly what should happen with super-practical, everyday, easily-incorporated products like these. i'll finish the one that i have and be back for more.