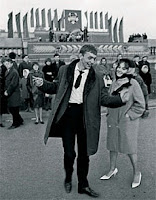 oh there is very little that excites me as much as a good subculture discovery. that's one of the many reasons i frequent messynessychic, with its mix of fashion, history, travel and quirk. and this week, i was enchanted by their article on the stilyaga movement of the soviet union in the 1950s. without being political [which would likely have resulted in them being jailed], this is a group who were deeply subversive to one of the most dangerous regimes in history [and certainly the most dangerous of the modern era] and they did it with clothes and makeup.

the fact that the stilyagi weren't overtly political didn't stop them from being subject to arrest and persecution. it was illegal to produce so-called "bone records"- albums pressed onto repurposed x-rays in place of vinyl- and those convicted of doing so were subject to time in labour camps. jazz music itself was officially banned. however, after the death of josef stalin and the ascension of the more liberal nikita kruschev, the soviet union came to embrace elements of the youth culture, culminating in the sixth festival of world youth held in moscow in 1957, but then began to claw back the freedoms they had extended. [starting with the banning of x-ray records.]

much of the emergent intelligentsia held the youth in contempt: their idolisation of all things american was a betrayal of the communist vision for which many soviets had fought and died. it was decadent and individualistic, as opposed to the pragmatic, homogenous vision of the early soviet architects. academics derided the stilyagi as "hipsters", with that word having pretty much the same connotation for them as it has for north americans now.

of course, i can't read about a movement like that without wanting to emulate it myself, although the larger effect is completely lost. after all, much of the stilyaga look was based on emulating what was popular in just pre-rock'n'roll america- zoot suits, poodle skirts, cat's eye liner and red lips- but i did try to capture a couple of details unique to the soviet youth.

in the wake of the second world war, young women would have been extremely limited in terms of the cosmetics available to them. black eye liner had the advantage of being relatively easy to make at home and very matte red lips would have been the main source of colour. for my stilyaga look, i did add some colour around my eyes, but very natural shades and used principally to give some definition. and while blush wouldn't have been common at the time, i did use a little, for just a hint of the delicate youthful flush i no longer possess. 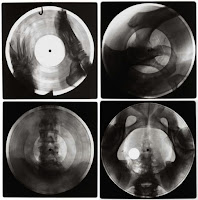 for the bright matte lip, i used a combination of a liner and one of the armani maestro liquid lipsticks. this is one of the few liquid lipsticks i actually like, although i expect that the things that i like about it are things that will make regular liquid lip fans dislike it: it doesn't ever fully set, so it will transfer and it does fade [although the brighter shades leave a nice stain]. it doesn't have the intense lasting power of other liquid lipsticks, but i find those unbearably drying and heavy, whereas the maestro's light, mousse-y texture leaves my lips feeling happy. using a lip liner underneath will give you that almost powdery matte look that continues to enjoy its moment in the spotlight. 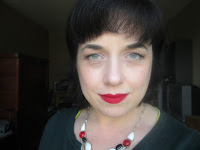 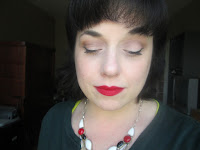 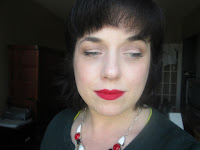 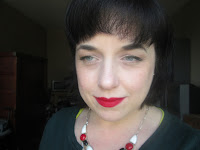 *suggested alternates :: mulled cider = urban decay whiskey [there are a  lot of similar single shades i've seen, but they're united in the fact that i don't own them. a lot of palettes carry this sort of deep brown as well.]; naturally wild/ ochre style =  sorry, i truly don't have a dupe for these, as brownish yellows and yellowish browns are rare as hen's teeth and often limited; notorious = mac strada [lighter, warmer, less lilac], although you're probably better off using an eye shadow such as nars lhasa or rbr solstice halcyon to match the effect of notorious

i didn't feel up to breaking out the full-on poodle skirt look [although i could], so instead, i went for the 50s-esque curve-hugging cardigan and snug skirt look. [i've already discussed my love of the cardigan as fashion item and i don't care how out of style they are.] but since the stilyaga subculture was all about subversion through in-your-face colour and bold accessories, i went with a bright citron-yellow shirt underneath my more conservative forest green sweater and i added a real statement necklace. unfortunately, i forgot to get a short of the full outfit, but i think you can see the key elements... 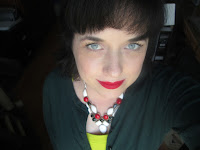 if you're interested in finding out more about the stilyaga, you might want to check out the 2008 film made about them [translated as "hipsters" in english]. it's a bit of a cult favourite, even among people who normally despise musicals. [the colour photo above is a still from the film.]

... and a special shout out on this post to all my more like space cadets from russia. i'm always thrilled when i see the places far and wide that visit this blog [and i do seriously track this every day], but one of the most enchanting things to me is that there are consistently people dropping in from the huge and mysterious land of vodka, mussorgsky, eisenstein, dostoevsky, maska genetik [among other noise/ power electronics artists who sound completely unlike musicians from anywhere else], futurism, a subway system that's on my bucket list of places to visit and many more of my favourite things [now including stilyaga].

auxiliary beauty said…
I love it when you share your subculture discoveries with us! I also love that combination of red and chartreuse, especially with your coloring. It makes me want a chartreuse top of my own, though chartreuse is a devilishly hard color to find in clothing.

My mother's family came from Russia and Lithuania, and I always feel so Russian when I wear matte red lipstick. There's just something about the color that plays up my more Slavic features (pale skin, heavy eyelids), though I think I usually pass for straight-up WASP.
5:20 PM

morelikespace said…
Believe me, nothing gives me more pleasure than sharing them!

It might be cheating to say so now that you've told me, but I can definitely see the Slavic genes at work in your face; your colouring, yes, but you also have the high, elegant cheekbones that I always associate with that part of the world. Suffering from terminal Celtic round face, cheekbones are a major source of envy for me.
6:04 PM

Iron Toad said…
Stilyagi the musical seemed to me a clumsy remake of the Absolute Beginners (a lost classic btw, everyone heard the Bowie title song, but the movie is as good as a musical can get), but I totally dig the style you made Kate. Looks to me more like the 80s stilyagi revival, which I was briefly a part of (actually, photos 1,6 and probably 9 from the Stylehuners article are from that era). A couple of videos for you from those years
http://www.youtube.com/watch?v=VZJuobqpknU
http://www.youtube.com/watch?v=jz0iH0VSanQ
And a genuine Soviet Twist on the Moon from 1965 (at around 1:15 into the video there is cosmonaut #1 Yuri Gagarin in the audience shooting the show on a handheld camera, his colleagues Leonov and Belyaev dancing with the singer)
http://www.youtube.com/watch?v=RbUGdF1vo64

morelikespace said…
WOW! I'm excited to have the opinion of an expert in the field :-)

I didn't even realise that there had been a revival in the 80s, however I can imagine that my young self would have gotten drawn to that. Actually, I still do dress a little like the singer in the first video.

I definitely remember Absolute Beginners, although I'm not sure I saw the film itself- just the Bowie video (which included snippets of the film, of course).

Iron Toad said…
You're welcome Kate ;)
Actually, Zhanna (the singer from that video) still loves a flashy look)
http://www.youtube.com/watch?v=YvhZ7TKfXBw
7:57 AM