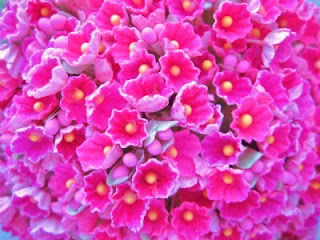 a couple of months back, i reviewed three of the four lipsticks released with the armani "fuchsia maharajah" collection and mentioned that i hadn't seen the fourth at either of my local counters. but my habit of haunting counters until i get what i want served me well and, eventually, one of them did get a few units. another fuchsia-pink rouge ecstasy? you'd better believe that's coming home with me.

the fourth and final lipstick in this collection is called either "pink blush" or "pink bliss". all of the promotional material i saw used the former name, but the packaging of the lipstick uses the latter. it's probably easier to go with calling it "511", which isn't quite as exciting, but is at least consistent from one place to another. as mentioned, it's one of the rouge ecstasy formula lipsticks, which are supposed to be long-wearing and offer skin care benefits to the lips. the colour coverage is said to be full, which it is, although it's never 100% opaque. the fullest coverage in the armani line belongs to the original rouge d'armani lipsticks. [as a side note, i can't help but notice that the colour offering of the rouge d'armani line has been dwindling both at counters and on line. i suspect that something is afoot and i hope that the rda line is being revamped and not just discontinued. there is still absolutely a place for a very full-coverage formula within the brand offering.] as far as the skin care benefits, i don't have a monogamous relationship with any lipstick formula, but this is the only lipstick that i can wear in the depths of winter. so how much of an improvement you get might be a little difficult to discern, but there is something to the claim that they are kind to your kisser.

"pink blush" is a brighter shade than that name would lead you to believe. it's a bold, clear pink that leans cool, right on the border between pink and fuchsia. compared to rouge ecstasy 512, "maharajah", it is a bit muted, a little lighter and definitely less red. it's a little more daytime friendly, although it's still the sort of shade that is going to make a statement.


i found that the formula on this one was just a little below what i've come to expect from the rouge ecstasy line. it was a little difficult to get the colour even [although not to the degree i experienced with "urban nude"] and the wear time was noticeably shorter. neither problem is huge, but it's perplexing. i can't figure out why this one should be even a little less incredible than the others.

for comparisons, the closest shade i have to "pink blush" is a limited mac shade from 2010 called "pink burst". although it's somewhat difficult to see in the photos, "pink burst" is a frost shade, with a lot of silver and white shimmer that makes it look both lighter and cooler, whereas "pink blush" has no shimmer. that means that, while the base colours are indeed similar, they look quite different in use. mac "catharina" is deeper, more saturated and redder.


and also for comparison's sake, here's a look at all the shades of lipstick from the "fuchsia maharajah" collection.


finally, of course, it wouldn't be a "me" post if i didn't share a look that incorporated the product i'm reviewing. so here's a look at "pink blush" along with some of her friends. 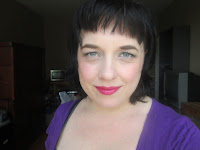 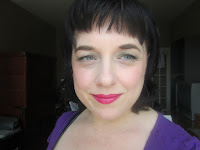 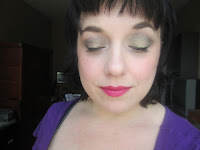 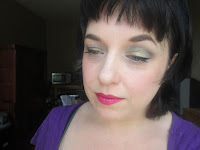 all of the fuchsia maharajah collection is limited, but a lot of counters and online retailers still have stock [even if they don't have testers out, it's worth asking]. even though it's not quite the best example of the rouge ecstasy formula, "pink blush" is still a solid choice if you're looking for a cheery summer shade that's bright but not loud.