paranoid theory of the week [supplementary] :: who's invading texas now? 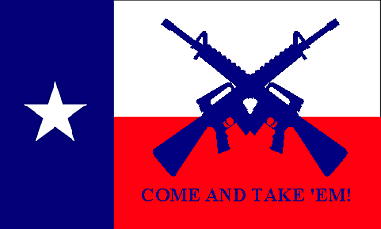 so it seems i might have spoken a little prematurely about yesterday's paranoid theory having died down. while it does seem that people aren't quite so concerned about the top secret except for truckers and random passers-by chinese military base in mexico, there is indeed a plan afoot to invade texas in the almost immediate future.

what evil foreign power is behind this imminent incursion? the united states. wait, what?

well, it's not the united states so much as barack obama and his cronies. that would be the united states government and their army, who are already situated right in texas and no one has noticed. at least, no one has thought of it as menacing, because those military bases are cleverly disguised as military bases of the country that texas is actually in. [no time for grammar here! it's an emergency!]

the plan is apparently to place texas under martial law. why? we don't have time for logical questions here!

of course, there's no way that the largest and best equipped army could subdue one of its member states all on its own, so the obamadministration [no time for spaces between words either!] has joined forces with the mexican army, the mexican drug cartels and isis, all of whom are apparently operating out of a place just a few miles away from el paso.

you know what's just a few miles away from el paso? mexico. and the mexican army is like right there as if they own the place. clearly, the only purpose that the mexican army could have being deployed inside one of the most violent areas of the world and a battleground for vicious drug cartels is invading texas.

yesterday, i characterized the conspiracy theory that the chinese army had a huge base inside mexico as being "strictly for the hardcore". and clearly, the idea that there's been a foreign power on mexican soil [other than the united states] for over a decade is completely preposterous, which is why even die hard conspiracy buffs don't tend to believe it. the idea that obama, isis and mexican drug cartels are about to place texas under martial law, however, is completely acceptable and boasts at least one extremely high profile believer: texas governor wayne "greg" abbott, who's concerned enough that he's mobilized the national guard to keep an eye on these american military installations in his state.

apparently the smoking guns for this theory are literally smoking guns, because there are mexican drug lords and islamic terrorsts running around with american military weapons. it's not like you can get those just anywhere, people. there's no black market for weaponry. [note :: the author of this blog is not responsible for what happens to your brain if you click that last link. you're on your own. like texas.] there's also the matter of several wal-marts that have been closed and are just sitting there, as if they're all innocent. [ok, quite honestly, if i were going to train an insurgent army, an abandoned wal-mart is exactly the place i'd choose to go. i've said too much.]

the other big deal is that this story has the backing of the king of conspiracy theorists, alex jones. and here he is interviewing former congressman and presidential candidate ron paul on the subject earlier this week. [spoiler alert: paul seems a little uncomfortable with the topic, as if he isn't yet entirely convinced of the encroaching evil.]

current presidential candidate ted cruz has expressed some concerns about the military installations and has asked the pentagon about it. [you fool! now they'll know you're on to them!]

old and tired :: chinese military massing along the mexican border.