making faces :: a special one from guerlain

April 23, 2015
there is no word more likely to inspire ecstatic fits among makeup lovers than "taupe". we are like a nation of pavlovian canines, salivating at the very idea of a shade that defies easy explanation. but it's that difficulty that makes taupe so universally desirable: there's so much variety with in it and so many of them are adaptable to a wide range of skin tones. a couple of brands are coming out with new and reformulated single shadows this year and you can bet that each of them will have their own version of taupe. so i figured i'd start with guerlain, who have just launched their new and improved écrin 1 couleur shadows, and just follow the taupe brick road as far as it leads me. [yves st. laurent have already launched their own new singles, although they've been overshadowed- yuk yuk- by their version of the liquid eye tints. chanel will be revamping their single shadows later in the year.]

the new guerlain shades come in shimmery and matte finishes. the one that i have, "taupe secret" [yes, the names are all puns like that, which just makes me want to buy them that much more] is shimmery, so much so that i was worried about it appearing frosty on my eyes, but it absolutely does not. i've observed myself applying this close up in magnifying mirrors to see if i can figure out how the shade goes from being so incredibly shimmery in the pan and swatched to a subdued glow on the eyelids. it's not necessary that i understand it to enjoy the colour, but it fascinates me nonetheless.

the colour is a very light, delicate taupe. the base of the shade is neutral, perhaps a tiny bit warm and the shimmer, which melts together with the base when applied on the lid, is silver with a little pink sparkle. the shimmer creates a shade that's overall cool, without being a pure silver or grey. the lighting has been absolutely terrible in my area lately, nonstop gloom and thick clouds from the feeble dawn to the wan twilight, which means that getting any kind of photos has been a royal pain in the arse. moreover, i think it might be impossible to truly capture the wonder of this beauty on camera. it's difficult for me to stop staring at it and admiring the shifts that occur as i either build colour up [without ever ending up with something that looks cakey] or blend it out [which is effortless, but doesn't result in the colour disappearing].

when it comes to luxury cosmetics- and guerlain is pretty damn luxe- i usually recommend that people go for neutral shades like this. it's the same logic that stylists use when they say you should invest the most money in timeless, elegant pieces that you'll use in a lot of different contexts for a long time. "taupe secret" is the eye shadow equivalent of that. it's more of an investment, but it's extremely versatile. [i'd also add that buying bold, splashy colours from luxury brands is a waste of money, because they can't generally do them as well as brands focused on makeup artists like makeup forever or illamasqua.]

the very nice thing about taupes is that the are often among the most unique shades you can find. every one has subtle differences. to white, rouge bunny rouge "solstice halcyon" is much deeper and more mauve. rbr "rain dove" is warmer, more golden and is also a more satin finish, without the shimmer. edward bess "storm" is cooler and more purple.


this being my first foray into the new guerlain single shadows, i'm hesitant to make generalizations about the formula as a whole, but i have swatched other shades and they seem, for the most part, to be consistent. my take is that guerlain has done something really special here. the texture is far better than their sparkly + matte duos, better than even the nicest of their four shadow palettes. it is creamy and smooth and the base and shimmer, as i mentioned, melt together into one nuanced, unique shade. i've worn the colour a few times and experienced no fallout. it wore extremely well, with the distinctive sheen still evident after seven or eight hours of wear. as it does start to fade, just after the eight hour mark on me [with a base], i see more of the silvery sheen than the base colour. i haven't experienced any creasing, although the temperature hasn't exactly been setting records. [it snowed this morning. snowed.]

the only issue i had with this shadow wasn't actually to do with the shadow itself. nonetheless, i'm going to mention it, because it infuriates me: the packaging for these shadows is ridiculously wasteful. at a time when more responsible companies are cutting back to minimize waste, these come in a cardboard box that's roughly double the size it needs to be. there's an insert in the box to keep the slender case from rattling around in transit, but an easier [and more cost effective!!!] solution would have been to print a box that actually fits the product. even the metal case itself is larger than it needs to be an includes one of those applicators that cosmetic companies are always including in order to create the illusion of more value for money. more waste. i'm happy, at least that guerlain has dispensed with the little velvet slipcases that prestige brands tend to use. those things have few uses [the larger ones can serve as business card holders some of the time] and they are like cat hair magnets. seriously. i feel like i should just hold them over my furniture and carpets and let them work their magic.

as i said, the lighting here has been le crap lately, but i thought i'd at least let you see a couple of shots of my new pretty in use, so that you can get an idea of what it looks like. honestly, these don't even come close to doing it justice. in both cases, i'm wearing "taupe secret" on the lids. i find it makes a fantastic all-over colour because it's neither too dark for daytime nor so light as to create a very stark look. it's very amenable to being on its own, as well, although clearly i've used it with other shadows here. 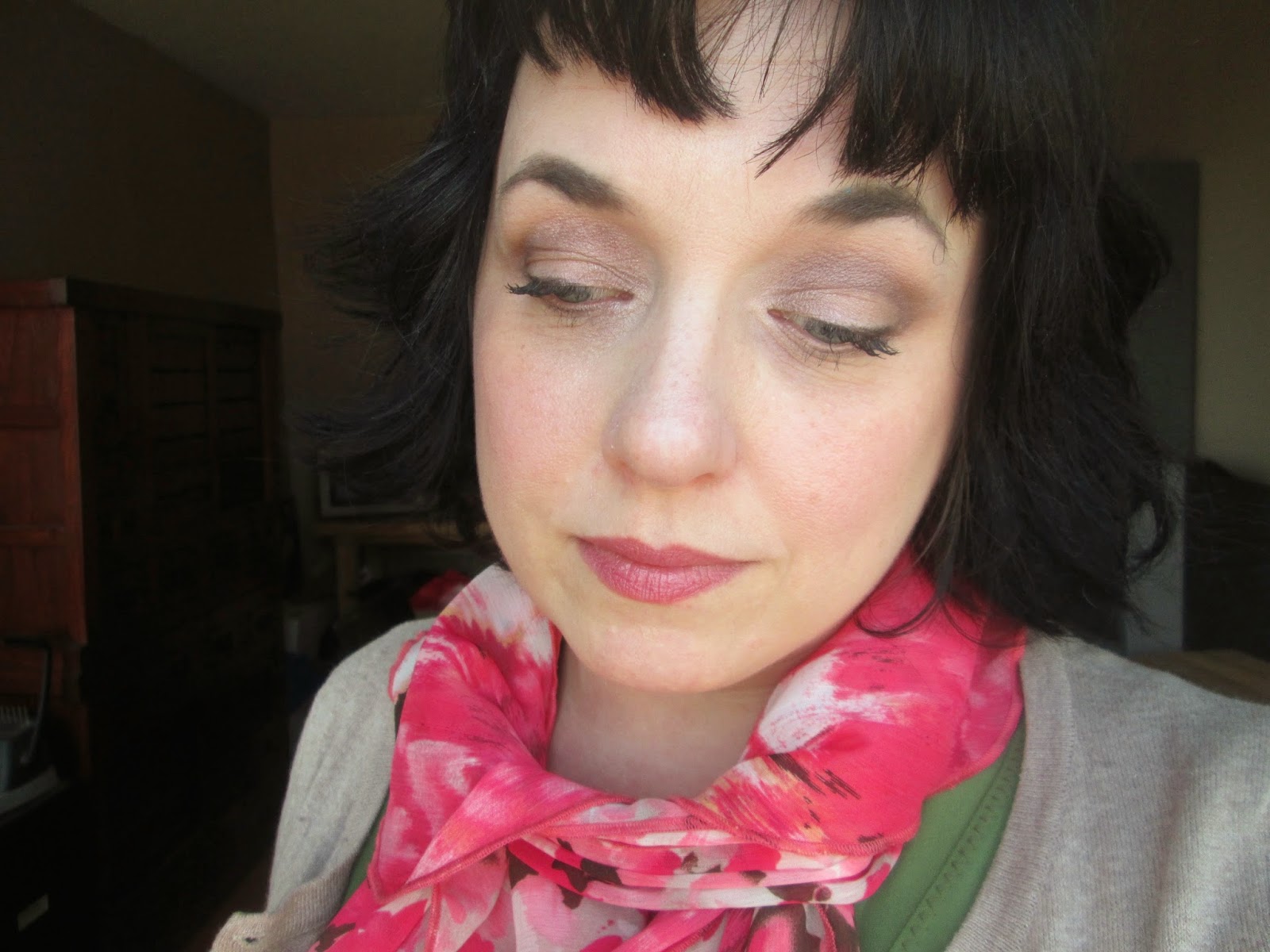 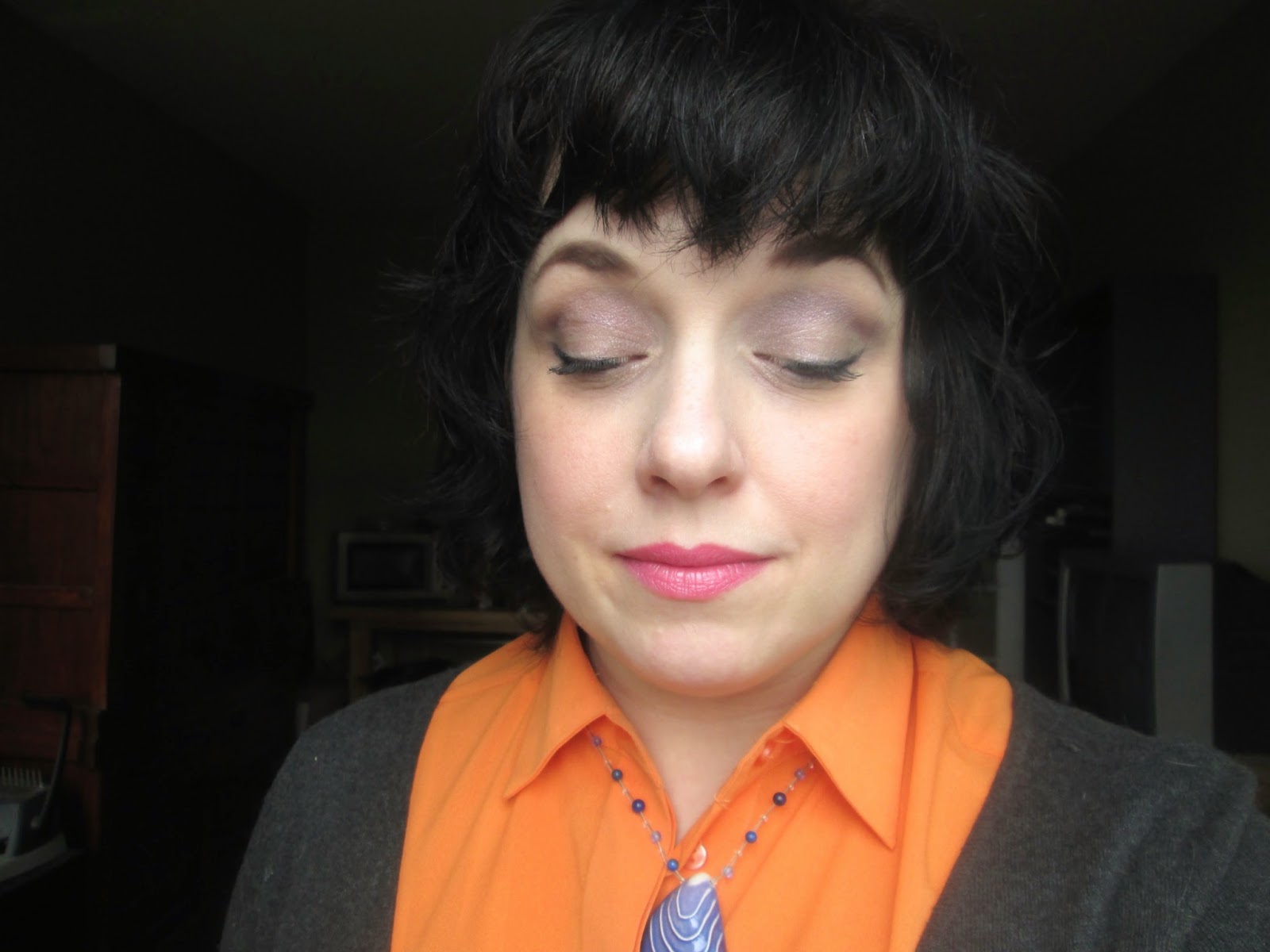 "taupe secret" is the best sort of introduction to a new line of high end products: a fantastic formula in a unique shade that can be worn with many other colours. the new guerlain shadows deserve your attention, but this one above all seems like something truly special.

Carina said…
Ack! This is so pretty. I can't handle it, lol. I do have Solstice Halcyon, though, and I think I'll just learn to live with that first. Ahh, but this is so, so beautiful. Great pick :D
5:35 AM

morelikespace said…
Not all of the new Guerlain shadows are unique, but this one really is. And just to be extra evil, it would make a really nice neutral eye in combination with Solstice Halcyon. :-P
5:07 PM

morelikespace said…
Thanks Rachel! All taupes are special, but this one is extra-special. I think it's the lightness of the shade that makes it unique. Most taupes are more medium-to-deep.
1:34 PM