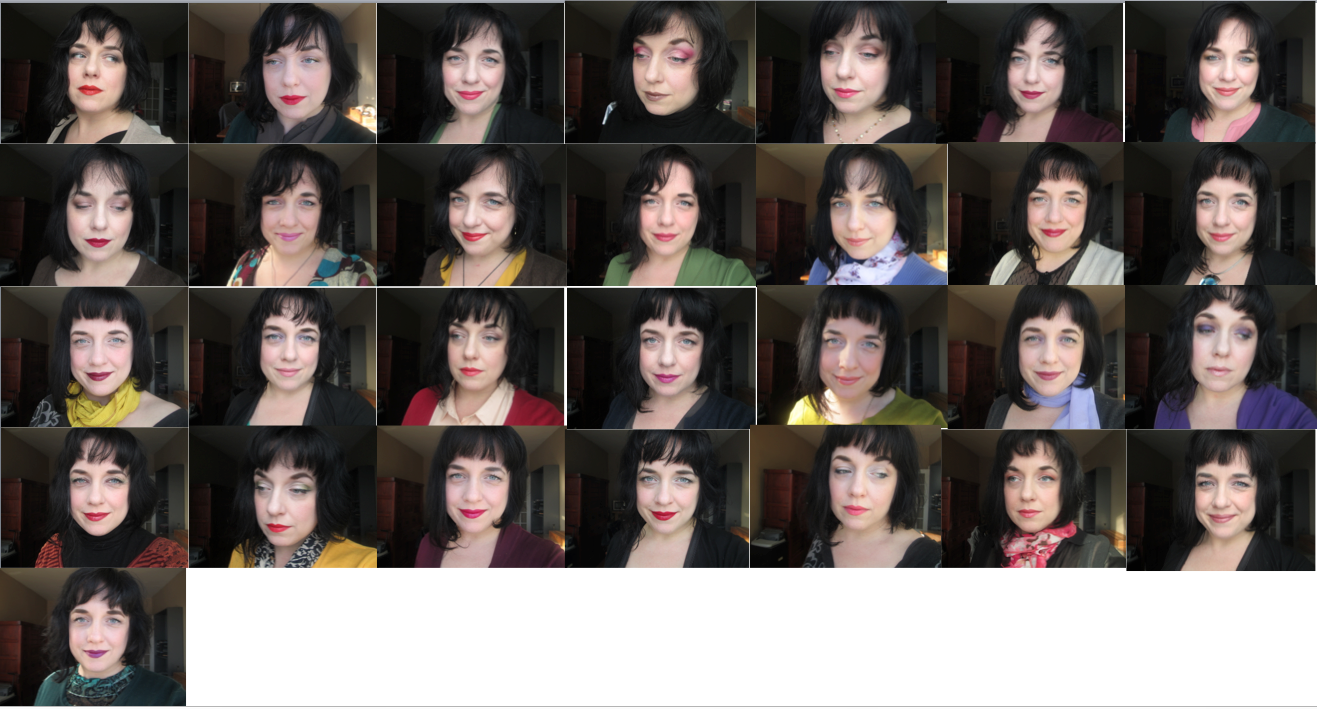 i fully admit that lipsticks are a thing with me. if anyone ever wanted to lure me into a trap, they could bait it with lipstick and i'd easily be ensnared. [then again, anyone who reads this blog knows that there are a lot of different methods to bait an effective kate-trap. it's just that lipstick is less expensive than shoes, faster than giving me stuff to read, more manageable than kittens and easier to make than the kind of music that would be a siren's song to my ears.] i would also argue that there are worse vices to have than liking to paint your lips. [when i was about six, i got busted after breaking into a neighbour's house to raid their peanut butter cookie stash while they were on vacation. i still maintain that only a fool would let a six year-old know that there was such a stash in their empty house, but the point of this true story is that i could have gotten into much worse things than lipsticks. and that you probably shouldn't tell me much about the contents of your house before going on vacation.]

i'm kind of proud of the fact that i did go the entire month of january without a single repeat. the photo- which is all twenty-nine of them [two days i just couldn't be bothered to rouse myself to lipstick]- includes a few shots that you've seen before, but a lot of them i just recorded for posterity. because what's the point of doing this sort of thing if you can't back it up with photographs?

this is starting to make me wonder at what point i will have reached critical lipstick mass. i mean, surely there is some objective criteria for "too many lipsticks", right? science hasn't figured this out? get on that, science. i am already strict about never allowing myself to buy multiples or back-ups of anything. even if it's limited. even if i really love it. i replace permanent items when they run out [increasingly rare as the collection gets larger, but it has been known to happen], but i never have two going at once. i also never throw lipsticks out unless something has clearly gone wrong. i know that they supposedly go off after a certain amount of time, but unless i can really tell from the scent [cheap crayons] or texture [also cheap crayons], nothing ever gets forced off lipstick island. so that means i have years worth of products, particularly mac [who were my one love for a long time, but then just turned out to be a gateway drug], rather than just the most recent hits.

i can already see a bias towards reds and brighter pinks in my choices, which is about standard for me, but i am trying to mix things up. i'm also trying to make sure that i representation of all the different brands that i own. on that, i've done pretty well, since there are selections from armani, guerlain, mac, nars, hourglass, dior, rouge bunny rouge, urban decay, le metier de beauté, chanel and yves st. laurent. however, seven of my january choices were from guerlain, so i haven't been quite as even-handed as i'd like.

i used to know someone who listened to his considerable music collection alphabetically to ensure that nothing ever got more love than the others. when he added something new, he'd listen to it for a couple of days, then into the rotation it went. since i normally think of music as something i needed to be in the mood to appreciate fully, this struck me as weird, but because i still tried it myself because i need such experiments to keep me occupied [or i'll go back to breaking and entering for peanut butter cookies]. i never made it farther than "h" before i got fed up and listened to something because it was exactly what i needed to hear at that very moment. i was kind of impressed i even made it that far.

i don't know what the lipstick equivalent of making it to "h" would be. whatever it is, i'd be highly surprised if i made it to that point, because i'm already feeling the urge to repeat a few things, particularly ones that haven't been in my collection as long and who haven't received as much love to begin with. wish me luck. or don't, because you think this sounds a bit weird and obsessive/ compulsive disorder-y. i made it through a month [although i'd done that before and even documented it in detail here] and i will continue to push forward until pushing becomes unpleasant and i get distracted by something that sounds like it would be more fun and take less time. that's the winning spirit i bring to most things.

p.s. :: i haven't listed all the shades, but if there are any you're curious about, please feel free to drop me a line.

p.p.s. :: you know, i've never even really enjoyed peanut butter cookies? [peanut butter and jam cookies are a different matter] it was always more about the breaking and entering.