February 28, 2015
in case you're not sure what this is about, you could go back and read last month's post, where you'll also learn about my criminal mastermind past.

here's this month's recap photo, a quick look at everything that i've put on my face [makeup-wise] in the last twenty-eight days: 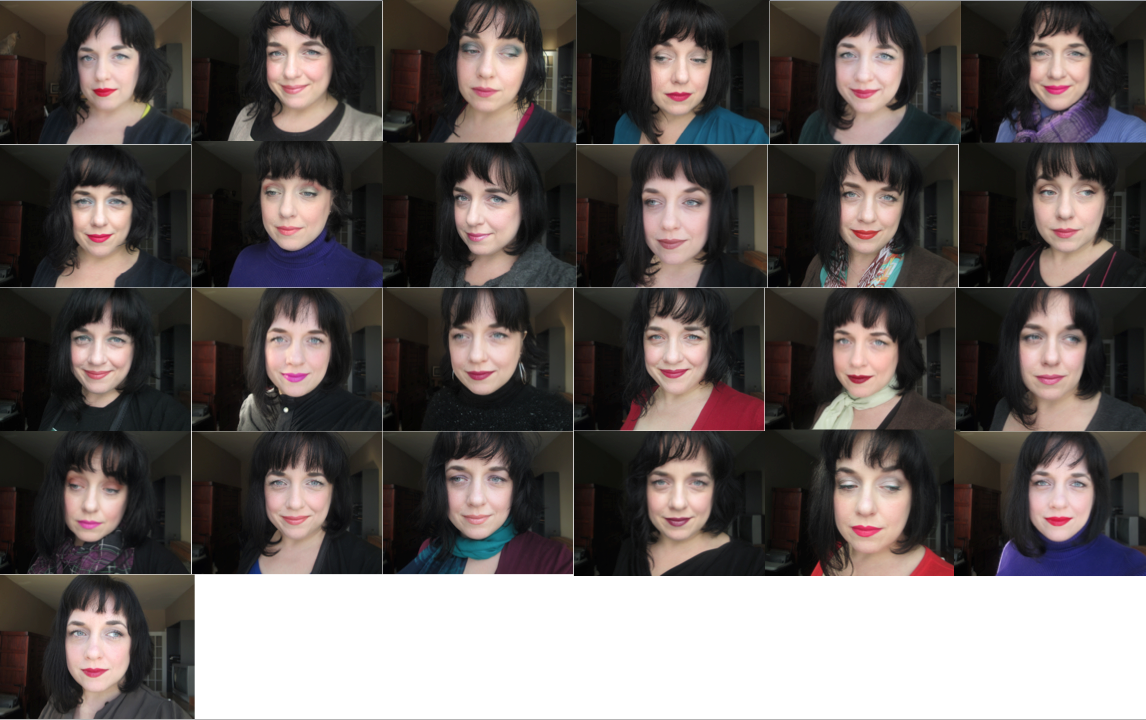 i cannot tell a lie: there are three repeats in there from the month of january:


but i can explain!! well, sort of, anyway. it's been so bitterly cold that despite the fact that i try to stay hydrated and moisturized, my lips have been in turribul shape. that means i can either just give up on the cosmetics and go naked [which i did in a few cases, as will become clear if you count through the photos], or i can limit myself to extremely forgiving formulas. rouge ecstasy is definitely my preference for such situations. [i could have used another shade, of course, but i was already dressed and that was the best shade i had to go with what i was wearing. if i feel poorly put together, it's like i have a stone in my shoe all day. i'm not joking.] i wanted to test the dior rouge baume to see if it could withstand the crackling, since i really have to review this little pretty that's been sitting on my vanity for two months. there will be a review forthcoming but chapped lip spoiler alert: it's good but not great.

the third repeat, "vivien" was because i felt that the original shots i took made it look very severe, which it isn't. [top row, second from right in the january photo, if you'd like to take a gander. i wonder if anyone ever got confused by that saying and stole a male goose? "what? you told me to come over and take a gander. what were you expecting me to do?" things like that keep me up at night. i've heard of studies showing that people who are night owls and who sleep less are more creative, but i'm still waiting for that to kick in, evidently.] i did say at the outset [i don't know if i said it out loud, but i thought it very clearly] that i was going to give myself some leeway on new shades, because it's not their fault that they arrived late.

but other than those three, yes, these are all different shades. i took one of those "test your vision" things online a little while ago that evaluated your ability to differentiate between colours. i scored in the top 2%, which may mean that i'm one of the very few people who can tell the difference between all these shades. it's possible that some of you are looking at the above picture and thinking i'm wearing the same lipstick in every picture. [although if you think the first two are the same, i'd feel more comfortable if i knew you weren't getting behind the wheel of a vehicle any time soon.]

some stats to make it more science-y:


the second thing i've noticed is that there is clearly more light showing on balance throughout the month. yes! the sun is coming back! it may still be freezing or well below it outside, but there is hope somewhere. [cynical me is snickering a little at the idea that i'm implying that the weather improves in montreal in march. it tends not to. in fact, what often happens is that it just gets warm and humid enough for a few major snowstorms. but after the coldest february on record, i'll take hope where i can find it.]

there are a couple of looks in here that you might recognise from previous review posts, but if you have any questions about any shades or looks above, please feel free to ask. does the challenge continue? it does. i'm not promising there won't be repeats, but there i can keep a high level of variety going for a long time. how long? stay tuned...

auxiliary beauty said…
Would you mind telling me which lipsticks you're wearing in the first and last photos in the first row and the last photo in the entire series?

morelikespace said…
My pleasure! In the first row, the first photo is Guerlain "Rouge Parade" and the last one is my special Bite Beauty custom shade "Flora Mundi". The very last shade is Guerlain "L'Heure Bleue". Sorry that the first two are unavailable, but the third one is, and comes highly recommended if you like red/ berry tones.

auxiliary beauty said…
Oh, I remember when you reviewed Rouge Parade! What a beautiful red that is.

In the interest of spring cleaning (not that it feels remotely like spring here), I've been making an effort to identify which lipsticks don't work on me. Quite a few, it turns out! I was thinking of having a blogsale at some point, though I doubt I could get much for my drugstore lipsticks, even the practically new ones...
8:43 PM

morelikespace said…
Rouge Parade is a beauty, but if you try either Givenchy Rouge Egerie or Guerlain Garconne, they're pretty close. (How close they seem is sort of dependent on how many degrees of red you can stand to have in your collection.)

It is embarrassing how unwilling I am to part with any of my lipstick collection. I keep thinking "but what if I really want to wear it some day?" or "what if I want to swatch it as a comparison against another shade?" It's quite pathetic, really. So right now, cleaning out my collection involves putting things in a sort of storage box, where I can access them, but where they're not taking up space in my regular collection...
3:09 PM