making faces :: not inspired by the great gatsby

January 16, 2015
although it's going on two years since baz luhrman's remake of the great gatsby was released, i'm disturbed to find that i'm still seeing a rather disturbing popular culture trend related to it. i don't mind that the film has helped fuel an interest in fashion from the 1920s. i love the 20s. i'm a huge fan of silent films and their attendant glamour. my favourite cocktail is the sidecar, which is one of the icons of the era. [in general i enjoy the strong cocktails of the age, made with a blend of sweet and tart ingredients meant to disguise the taste of bathtub gin or home-distilled whiskey, but without sparing the alcoholic punch. find some excellent recipes here and here.] and although i can't wear them [damn those curves], i love the sporty but elegant look of drop-waisted dresses. and, as someone who did an undergraduate degree that focused largely on writing from the interwar period, i'm happy for anything that hits the mainstream conscious that might encourage people to pick up a book from the time.

what does bother me, however, is that i continue to see articles, pinterest boards and more that offer suggestions for things like "gatsby-themed parties" or "gatsby themed weddings". a "gatsby themed" event would be one that ended with everyone dead, the host floating face down in his swimming pool as he expired from a gunshot wound. i'm going to venture a guess that that's not what you had in mind for your big day. saying "i'm using a gatsby theme" is like saying you're having a party where everyone is supposed to dress up like hippies and calling it an "apocalypse now party". [not that i wouldn't be down for that, because i love the smell of napalm at the dinner table.]


instead, what you're likely planning is a jazz age party, or a flapper-themed party and good for you, because that's a really interesting historical period on which to focus. the great war was over! the mood was jubilant for everyone, except for those who came home in parts and were generally left to be paupers. well, actually, a lot of people weren't jubilant at all. a lot of people were righteously pissed at their governments and their monarchs for sending them out to get slaughtered en masse for, as ezra pound put it "an old bitch gone in the teeth". [world war i is another interest of mine. you can read some thoughts about it here.] a lot of people felt dazed by the incredible scope of the loss and one of the ways that they coped with it was by drinking, even after it was banned in the united states by constitutional amendment in 1920.

because the war had had such a devastating effect on the population [which was followed closely by one of the most deadly influenza epidemics in history], economies in desperate need of rebuilding were short on workers, which meant that the door was opened for women to enter the workplace. combined with gaining the right to vote in 1919, the postwar years were a pretty good time to be a girl. of course, a lot of those girls didn't see why they should have to play by the rules that had served the world so badly. in particular, working class girls [who were the ones taking the jobs, after all] had their own income and a greater independence than their mothers had ever known. thus was the flapper born: not a diamond-encrusted debutante but a girl from the streets [who could be from any race] who earned her own way, said to hell with convention and ran right alongside the boys, wherever it took her.

by the time fitzgerald wrote about flappers in the great gatsby, the first wave of flappers had passed. what we see in the novel is the trend after it had been co-opted by the upper classes. fitzgerald's jazz age characters aren't spunky or independent at all. they're often shallow and louche, reveling in the culture that they mimic, without actually experiencing it. by that time, the flapper had been tamed through the magic of film. either she was really an adorable, old-fashioned girl disguised in a modern dress, or she was a lost girl, desperately trying to embrace a freedom she couldn't control.


when we think of flappers and the jazz age, it's most often those screen versions we call to mind. clara bow was undoubtedly the most successful, being the most or second most successful box office draw every year from 1927 to 1930. josephine baker was the most outrageous, moving to europe where she gained fame for her taboo-breaking dance performances. but when i picture the perfect flapper, my mind always turns to the beautiful louise brooks; she of the razor-sharp bob and impossible elegance.

a little earlier this week, i finally got around to trimming my bangs which, if you've seen any of the looks i've posted recently, you'll agree was desperately needed. rather than going for my usual angled fringe, i decided to change things up a bit by cutting them flta and blunt, right across the forehead. since my hair loses a lot of its natural wave during the winter, i figured that i might as well embrace the straight and do a sort of everyday take on a louise brooks flapper look.

unlike a lot of flapper icons, louise's look was more streamlined and minimalist. the shadows around her eyes were more for shape and definition and were considerably lighter than what was seen in america. [like josephine baker, brooks found her greatest success in europe, working with german director g.w. pabst.] so in my take, i decided on a deep lip- because lipsticks of the era [the lipstick tube itself being a recent invention that allowed young women to take their colour of choice with them wherever they went] were always dark- and a very minimalist eye. i went with an even more nude eye than brooks herself, since i wanted something that didn't look too dramatic for daytime. i also decided to add a bit more colour on the cheeks, just to add a little balance. 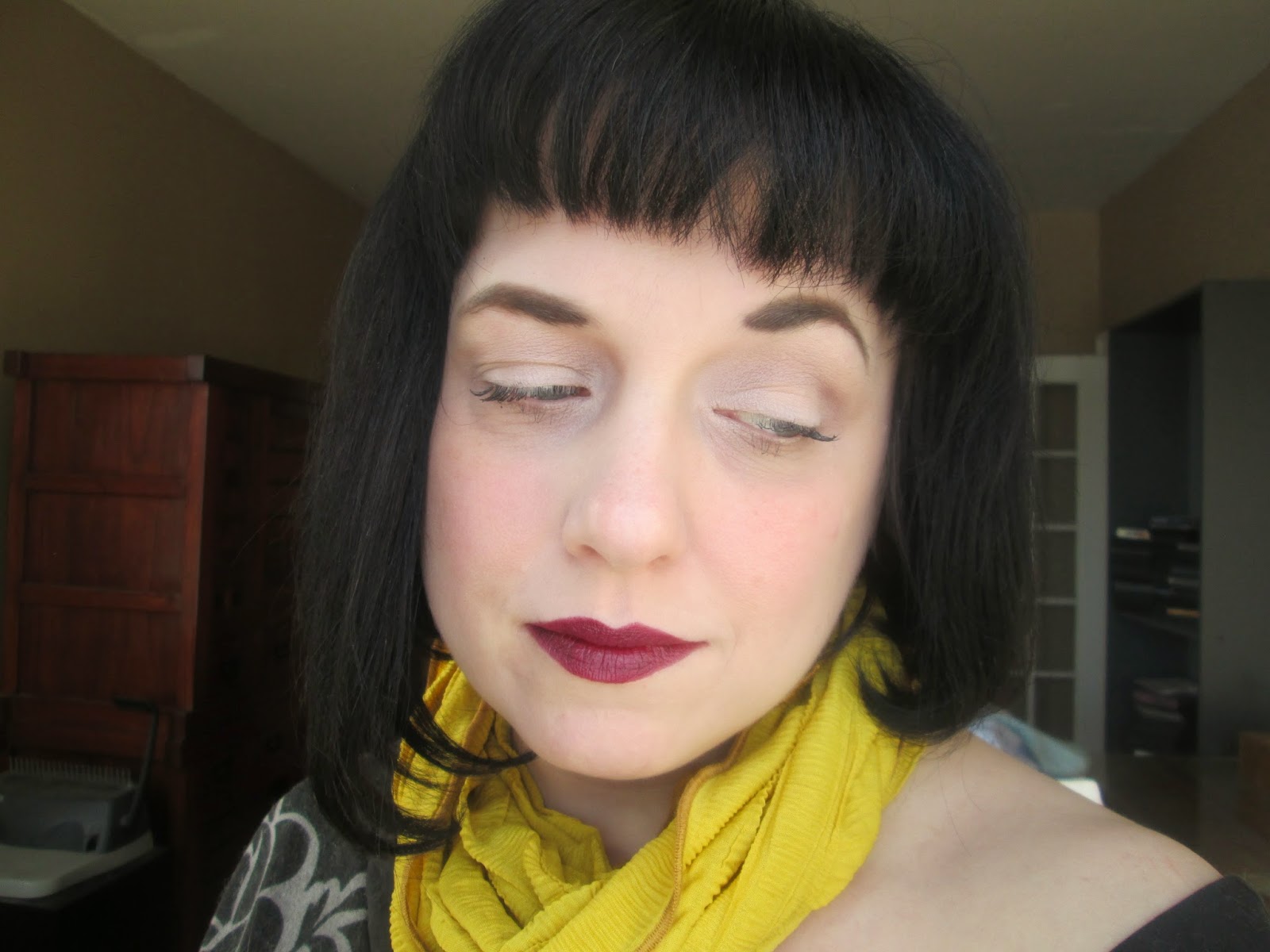 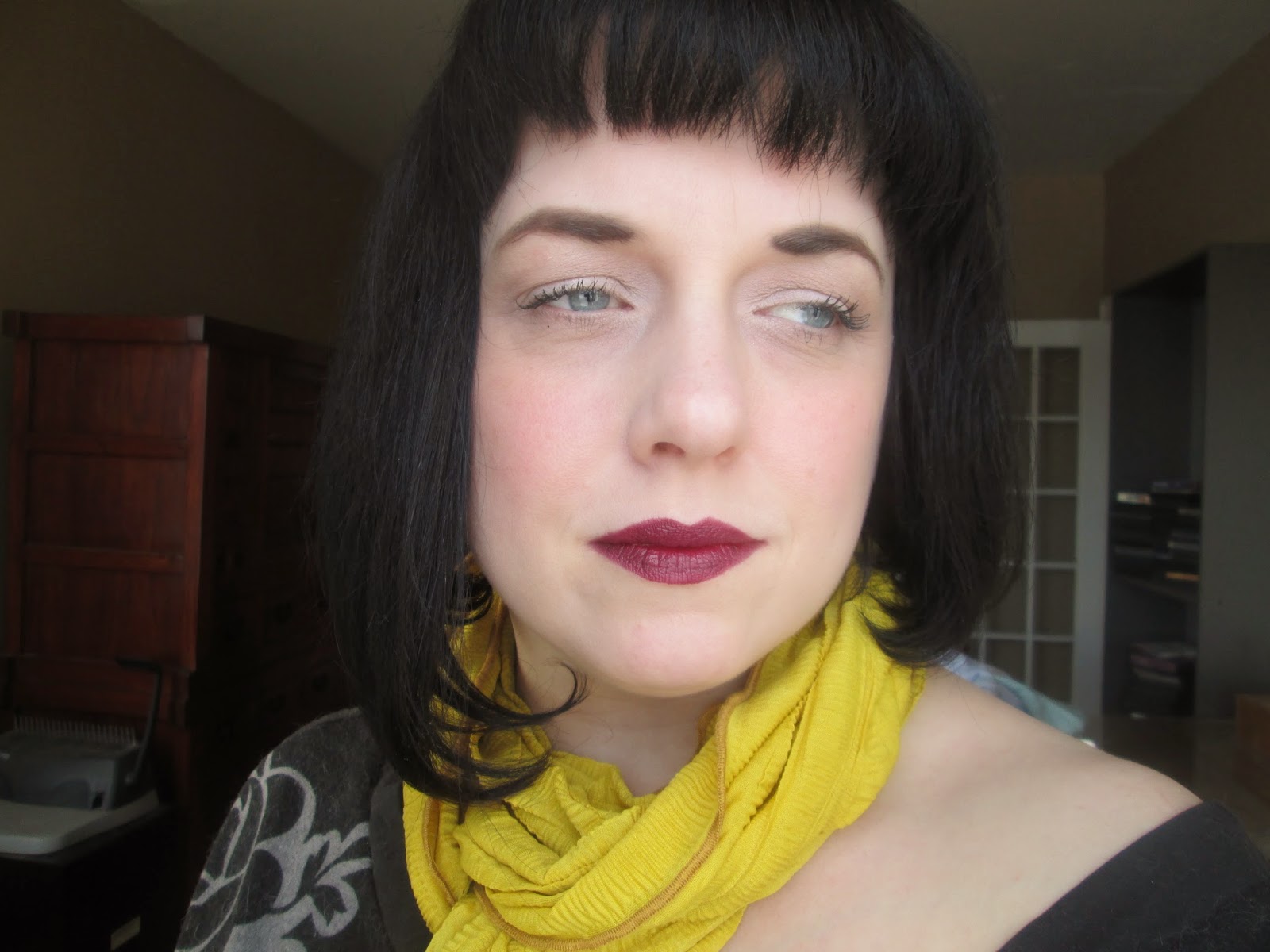 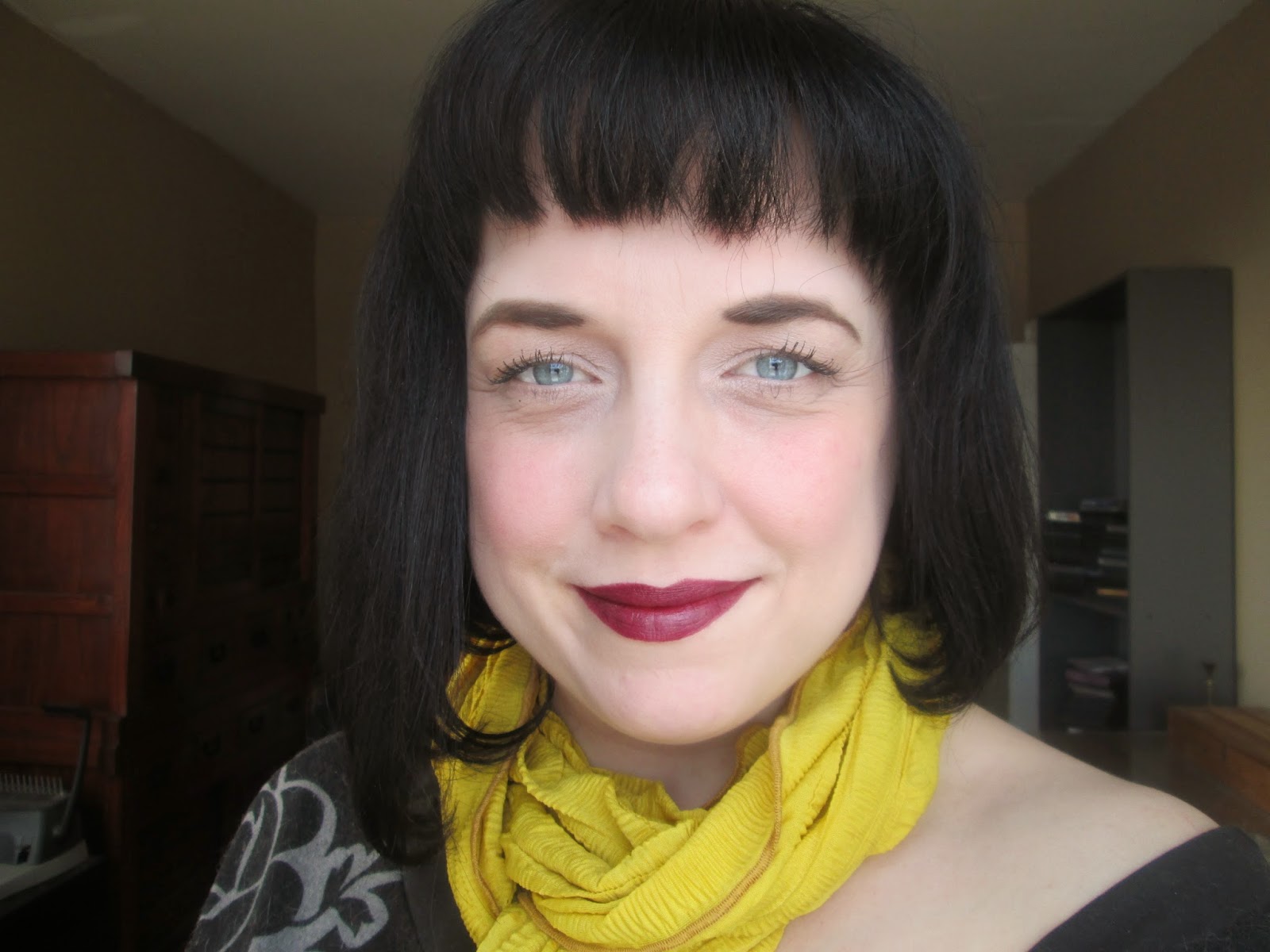 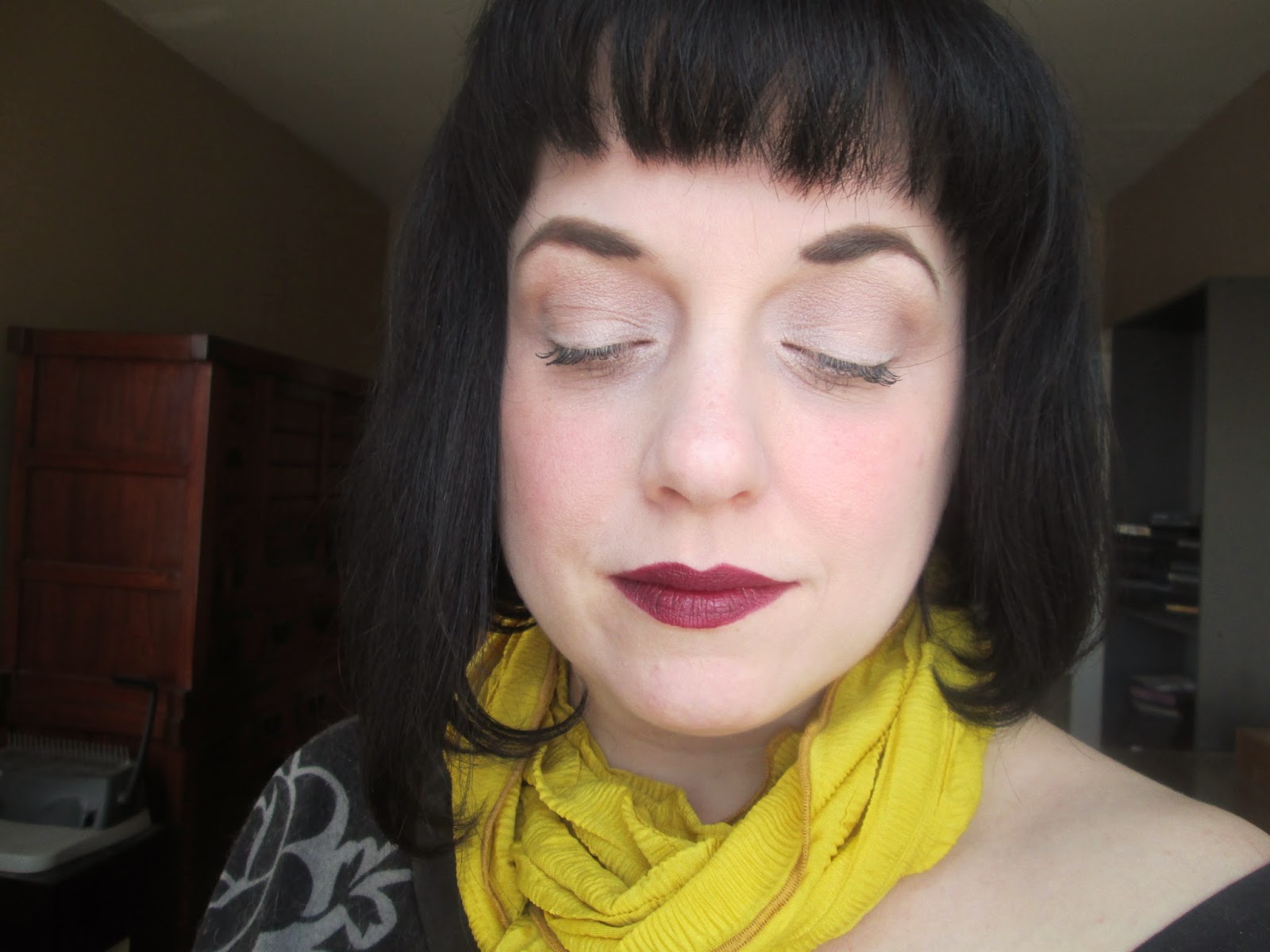 the eyes ::
inglot e/s 351 [matte ivory]; applied all over the lid
armani neo-black palette #1 e/s [shimmery eggshell]*; along the brow bone and tapped on the centre of the lid, applied lightly to the lower water line
rouge bunny rouge e/s "solstice halcyon" [mauve taupe]; along the lower crease
rouge bunny rouge e/s "gracious arasari" [warm beige]*; above s.h. between the crease and the brow bone and on the inner eye socket, along the lower lash line
dior new look mascara

so feel free to use this look for your next party. or fashion yourself after another icon of the age. make a few of those cocktails mentioned in the links above. play jazz. dance the charleston. wear a drop-waist dress if your figure permits it and know that i envy you. but please, please don't throw a "gatsby party". because killing all your guests would be messy and probably wrong. and no one would ever come to one of your parties again.