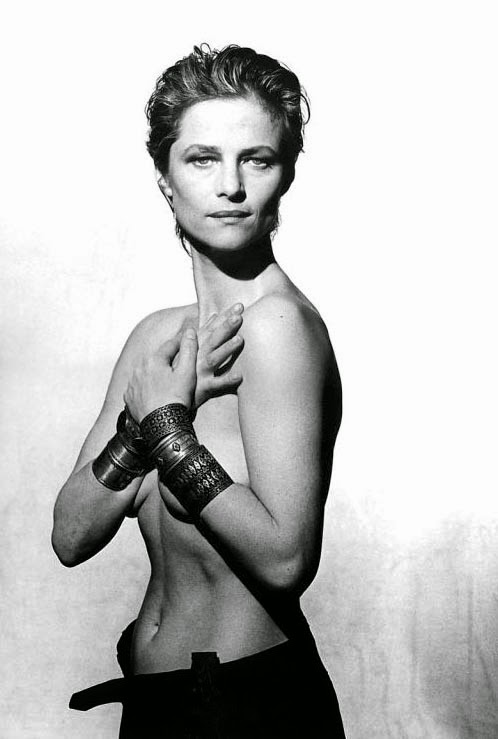 what's this? another audacious lipstick review? yes, indeed it is. and yes, i do eventually plan on reviewing other things, it's just that these are so fun, since they combine my love of lipstick and film icons. this is a serious rabbit hole for me.

my latest shade [not really -ed.] is the one named for the audacious lipstick campaign model, charlotte rampling. before continuing, let's all just take a moment to appreciate that: the most successful launch in the cosmetics industry last year featured a model who was 68 years old and the product had nothing to do with hiding or reversing the signs of aging. in case you needed another reason to love francois nars.

rampling is actually a very appropriate model for a product called "audacious", in that it's also the word that many would use to describe her choice of roles over her fifty year career. many of the characters she played challenged societal and particularly sexual norms and she has worked with a list of risky directors. while she might not be a household name, or a regular on american awards shows, hers is a legacy that gets a respectful bow from movie heavyweights.

for those of you who watch the first season of the british show broadmoor, charlotte will play a major role in season two, which has just started. dom and i watched the first series in one night, so i can pretty much guarantee that 1. we will be watching season two at some point; and 2. it will be after the whole thing is released on dvd, or bluray or on some streaming format, although we generally haven't gone for that in a big way. so no sending me any spoilers, got it? seriously, twitter already ruined the first episode for me. [we have not gotten around to watching the last season of dexter yet, although we probably should just for the sake of closure. it's just that after the rancid bowl of cat piss that was season seven, it's really difficult to psyche yourself up for the season that everyone says is much worse.]

the lady's eponymous lipstick is one that i new from the time i heard about the launch would have to be mine. it's a deep, but perhaps just short of full-on vampy red with a distinctly cool undertone. i'm happy about that latter part, because the majority of lipsticks in what i call the "wine" family [burgundy, bordeaux, merlot, sangria, etc.] usually lean warm. it's not that i don't love them, but sometimes, you want something a little different. nor does charlotte have the pink/ purple lean that would pull the colour into "berry" territory: she's a pure, deep, bloody, boozy red, dark but with an inner brightness that shows extraordinarily on the lips. [it's that underlying brightness, a sort of luminosity, that keeps this shade clear of what i would call a true vamp. it lacks the earthy brown tones that to me, are an essential part of the vamp family. i have a lot of rules.]

the formula on charlotte was a wee bit creamier than i experienced with either "greta" or "angela", although the coverage was about the same. i did get just the teensiest bit of feathering along my top lip as the day wore on, although this really constitutes being picky, because it wasn't noticeable unless your attention was drawn to it. the lasting power was excellent, as i've come to expect, and i'd daresay that it was even better than the previous two shades i've tried. i also find that i noticed the smoothing effect of the formula more with this than with "greta" or "angela".

since there aren't a lot of cool-toned deep reds kicking around, there weren't a lot of comparison points [even though i make a habit of buying cool-toned deep reds almost whenever i see them]. armani maestro lipstick #201 "dark velvet" is darker and looks much more matte on the lips. the limited mac shade "so scarlet" is deeper and warmer. [this is a great example of how a truly cool shade like "charlotte" compares to a more typical deep red.]

this is the sort of shade that's going to lead a look, so my inclination was to play it neutral with everything else. that said, it's not so full-on bright that it can't handle a little smokiness, so i decided to be just a little more dramatic than i would with a hundred-watt red, like, say, guerlain "rouge parade". here's what i tried the first time i wore "charlotte" 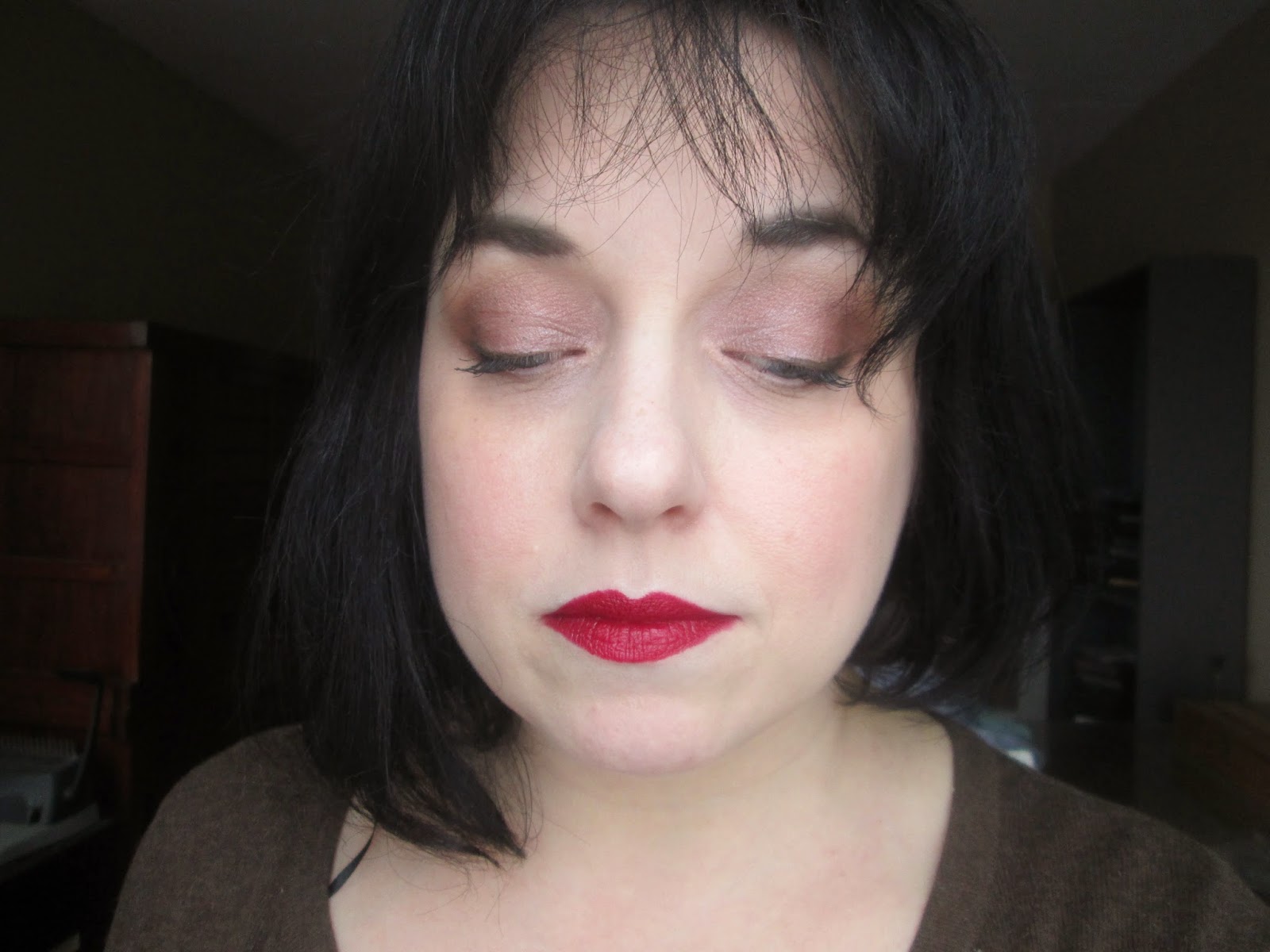 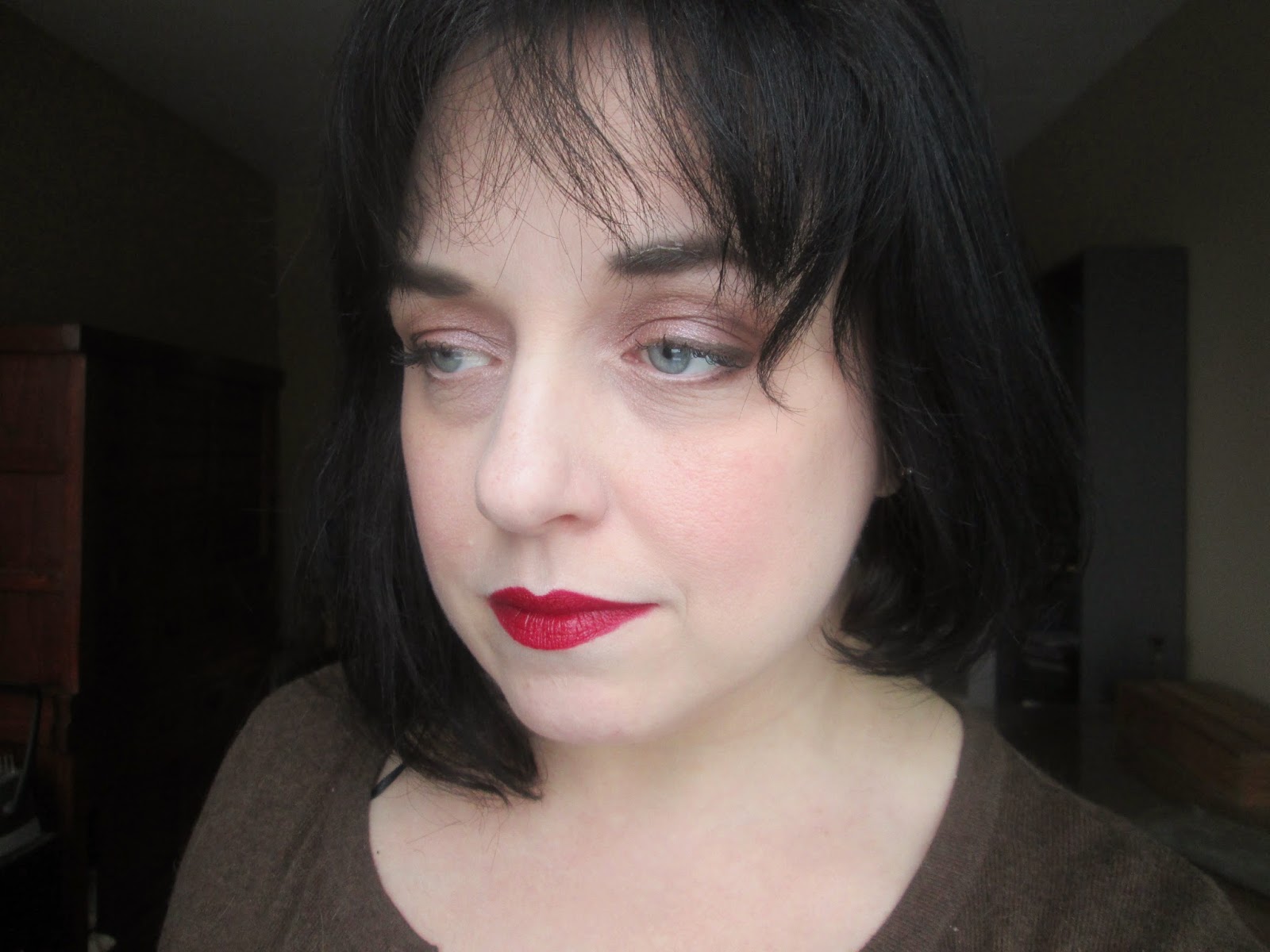 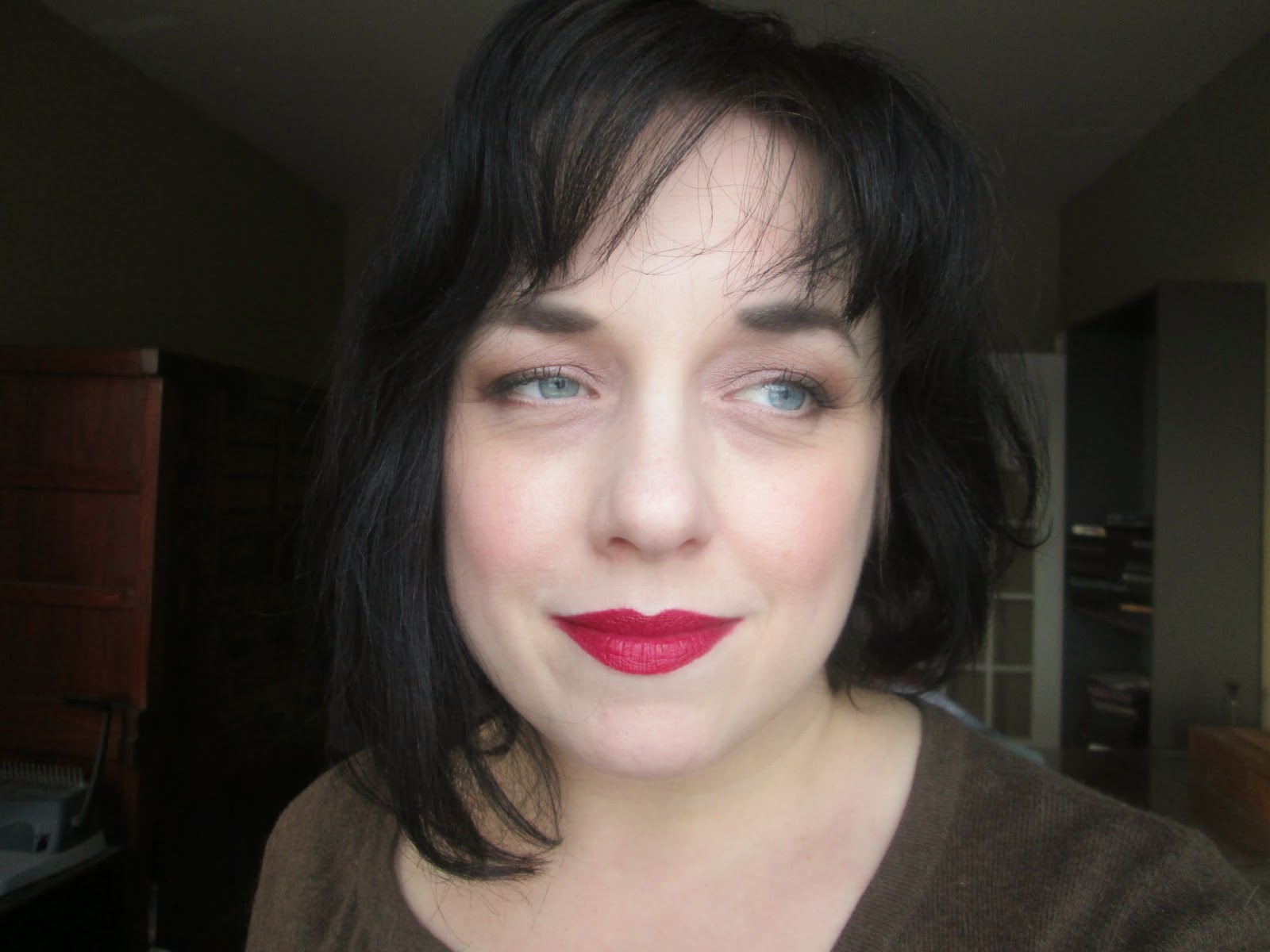 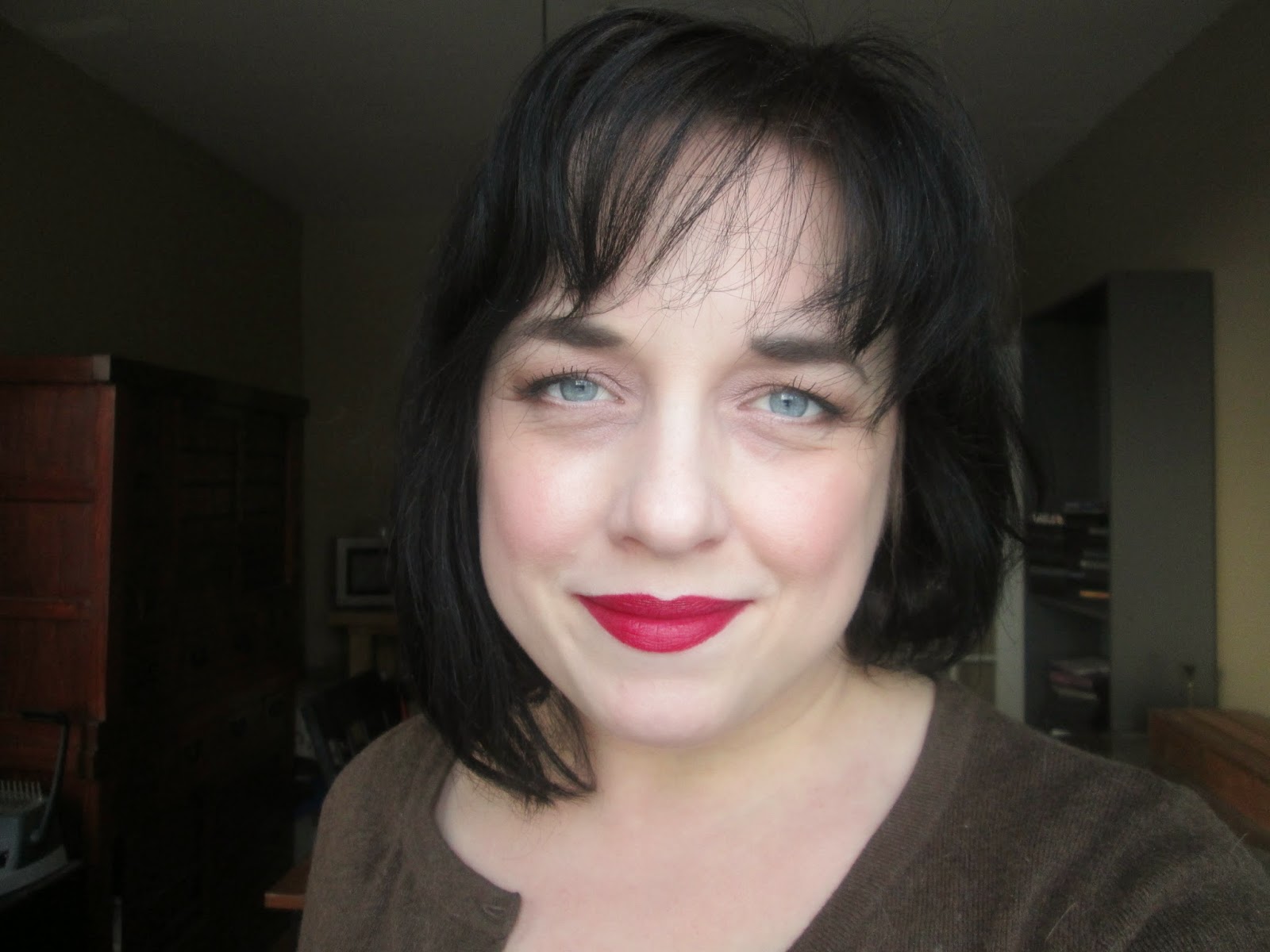 that's nars "dolomites" on the eyes, the deeper chocolate brown shade applied in an arc from one side to the other and the stunning rosy mauve taupe shade applied on the centre of the lid. [i've also used mac fluidline brow in "deep dark brunette" as a liner and mac "creamy bisque" [substitute dazzlelight] as a brow highlight.] "dolomites" is known around this blog as the runner up for the coveted 2014 more like space shrunken head award for best eyeshadow palette, although i never actually wrote a proper review of it. bad blogger. bad. i hope that this gives you and idea of just how excruciatingly beautiful it is/ was and encourages you to find out if there are any remaining at counters near you.

on the cheeks, i've used guerlain rose aux joues blush duo in "red hot", a spicy red combo, and guerlain highlight powder in "parure de nuit" a delicate light coral. [i don't really have a good substitute from any permanent collection for "parure de nuit", largely because, depending on how you swirl your brush across it, you can end up with more or less colour/ highlighter. it's probably worth noting that i got mine from ebay at below retail price and in perfect condition and it was far from the only one available.]

[and no, i have no idea what that crud is in my left eyebrow. i'm going to be wondering about that for the rest of my life because, seriously, who doesn't notice that when they're applying makeup, especially since part of doing that was filling in my brows?!]

in the bottom right photo, the final photo, of the look, you can see the little bit of feathering at the centre of my top lip, along the cupid's bow. however, you might also want to take note that that photo was taken three to four hours after the other three and a cup of coffee and glass of water were consumed in the interim.

"charlotte" lives up to the high standards set by her predecessors and while i would never call any colour "necessasry" [i don't believe that there is any shade that would flatter all complexions], this one comes about as close as possible. if you're trying to choose a first colour from the audacious lipstick line and want one to go with something bold but classic, this is your girl.

auxiliary beauty said…
I overlooked Charlotte when the Audacious lipsticks first came out, because I confused it with some of the browner dark reds in the line. I had no idea it was so vibrant! I love your pinky-brown eye makeup with the deep cool red of Charlotte. Also, your NARS posts have made me more aware than ever of my ignorance of film history. There are so many classic movies I haven't seen.

By the way, I finally bought an Audacious lipstick: Angela! I have you to thank for putting it on my radar, though it seems to pull more violet on me than it does on you.
10:46 AM

morelikespace said…
I'm so glad that you adopted Angela! From pictures, I think it's possible that your complexion pulls a bit cooler than mine (which is weirdly warmer than it looks).

Strangely, my knowledge of cinema gets stronger the further back in time you go. I'm not well-informed on films of the last ten or fifteen years at all, with a few exceptions. Good for blog posts, bad for being able to maintain a normal conversation.
1:33 PM