November 23, 2014
i got reminded of this post because it's received a surprising number of hits this week and because i just made the same basic dish for supper. also, i realised that i haven't posted any cooking-related posts since the end of "eat the cup", which was entirely unintentional. i forgot to pick up parsley, but i did add fresh parmesan, so i guess that this is a heartier [although not healthier] take on the same idea. and parmesan doesn't make it any more complicated.

i no longer work in the sticks, thank god, but i do still appreciate something that's quick to prepare but isn't prepackaged, frozen or otherwise removed from what i snobbishly term "real food". i'm using dried pasta and minced garlic, so it's more than possible to get all holier-than-thou on my ass. 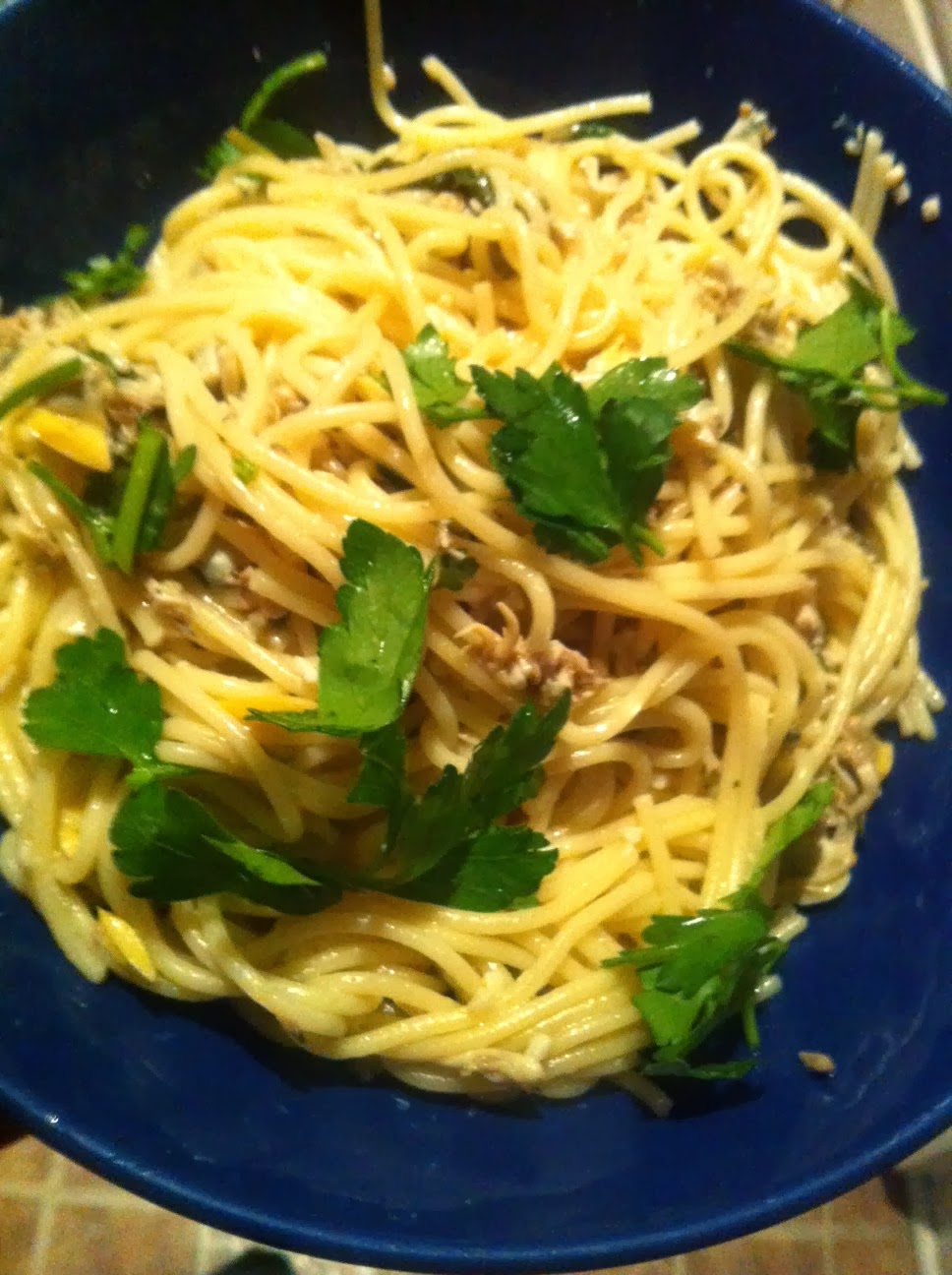 one of the [many] frustrating things about having to commute to the suburbs for work is that by the time i get home, i pretty much never have the energy to cook a nice dinner- the kind of dinner i like and that will make me happy. dom helps whenever he can, although the state of his health means that he doesn't have the energy to do a lot of prep work in the kitchen either. besides, i'm the one who loves to cook. during times [very few and far between, sadly] when i've been working closer to home, cooking a good meal at the end of the day was something i used to look forward to. but after having spent the better part of a year and a half telling myself that i would eventually push through and would arrive home with boundless energy. [the optimistic part of me has a weird sense of timing.]

in the meantime, i've compromised with a lot of prepackaged foods and ordering takeout more than i should, but i think i'm finally ready to face my problem head on. i need to uncomplicate.

one of the reasons that i find the notion of cooking supper daunting is that there are usually so many steps involved. on some occasions when i have felt like making something, we've ended up eating dinner at ten o'clock at night, which is fine if you plan on going to bed at two, but if i did that i'd suffer sleep deprivation and go crazier.

so the immediate challenge i've set for myself is to come up with healthy, tasty meals with as few ingredients as possible. and in keeping with my thoughts on what to do with the blog this year, i've decided to tell you about all this. because if i have to post pictures of it, i'm less likely to tell dom that we're having a bag of flour for dinner.

my first attempt at this was something i'm extremely comfortable making: pasta. specifically linguine alla vongole, or long-noodle pasta with clams. i didn't actually use linguine, i used spaghetti and i'm sure that all the italian readers of my blog are rolling their eyes at me right now, but the difference to me is minimal and i had a five pound bag of spaghetti, not linguine in my house.

pasta, along with many carbohydrates, has been a staple of the most simple cuisines for centuries. after all, having meat was considered a luxury until relatively recently. most peasants subsisted on pasta, rice or bread. why do you think the lord's prayer mentions "our daily bread" rather than "our daily bacon"? it's pretty clear what people were relying on to get them through the tough times. pasta is one of those things that people who had to work long hours turned to for sustenance. i'm ready to learn from their example.

that's it. i would have added some white wine, but i didn't have any and i didn't feel like braving -25 celsius to make the extra stop.

i would have preferred to use fresh clams, but that's kind of a pipe dream. if the fish counter at my grocery store had had fresh clams, maybe. but the fact is that a lot of the seafood that you get in montreal in january, unless you know a guy, isn't going to be that much better.

also, you may have noticed, i buy minced garlic. i love garlic. i put garlic in most things that i cook. it's a foundational element for me, like salt for many others. however, my body utterly rejects the outer skins of garlic cloves. i'm not sure when this started, but the effect is... chilling for all involved. so my options are 1. use a garlic press and spend a lot of time cursing under my breath as i try to clean it; or 2. buy minced garlic, which is free from outer skins and requires no special cleaning rituals.

i do, however, get insistent on fresh herbs, which are cheap and plentiful. i guess that's where i draw my line.

the most complicated part of this is that it requires two pots, but sautéing some garlic in olive oil and tossing clams in it with some of their juice [the rest joined the pasta water] is a lot easier than preparing a traditional tomato sauce from scratch.

the result? definitely edible. [would've been better with wine, like most things in life.]

the other result? i get to have fun cooking without making dom wait until the wee hours to eat.

so what's your fall-back for a quick, healthy meal with minimal ingredients? feel free to share your suggestions...