making faces :: two ways about it

October 19, 2014
this week in montreal we entered the season of the gloom, that point in autumn when it gets all blustery and there's rarely more than feeble light. although i'm easily depressed by rain and heavy clouds at virtually every other time of the year, i have to admit i don't mind it in the fall [as long as there are some breaks when i can take umbrella-less walks].

although it's tempting to just stay in bed under a blanket of cats, wearing pyjamas and not bothering to make myself presentable in any way, but i also get some enjoyment out of feeling like i'm preparing to face the world, even if i'm not exactly going to be making any television appearances. [i actually have, a few times, as a person on the street. i guess i make a particularly average looking citizen.] when i do go to steel myself to face the outside world in the face of the bluster, i've found that the decision on what to do goes one of two ways:


so i thought i'd share an example of each and let the world decide if one works better than the other, or if i'm just setting a bad example [multiple bad examples -ed.] for the rest of the world.

style one: shaking my fist at the wind

in keeping with my self-diagnosis as a bright season person in sci/art classification, it makes sense that i should try to keep with well-defined, somewhat bolder colour choices. although i'm not convinced that you have to change the tone of your palette to suit the seasons, i do find that brighter colours take an extra step forward in dull daytime light, so i do tend to wear the most shocking shades in the seasons when we're most flooded with light. but sometimes you just want something cheerier. 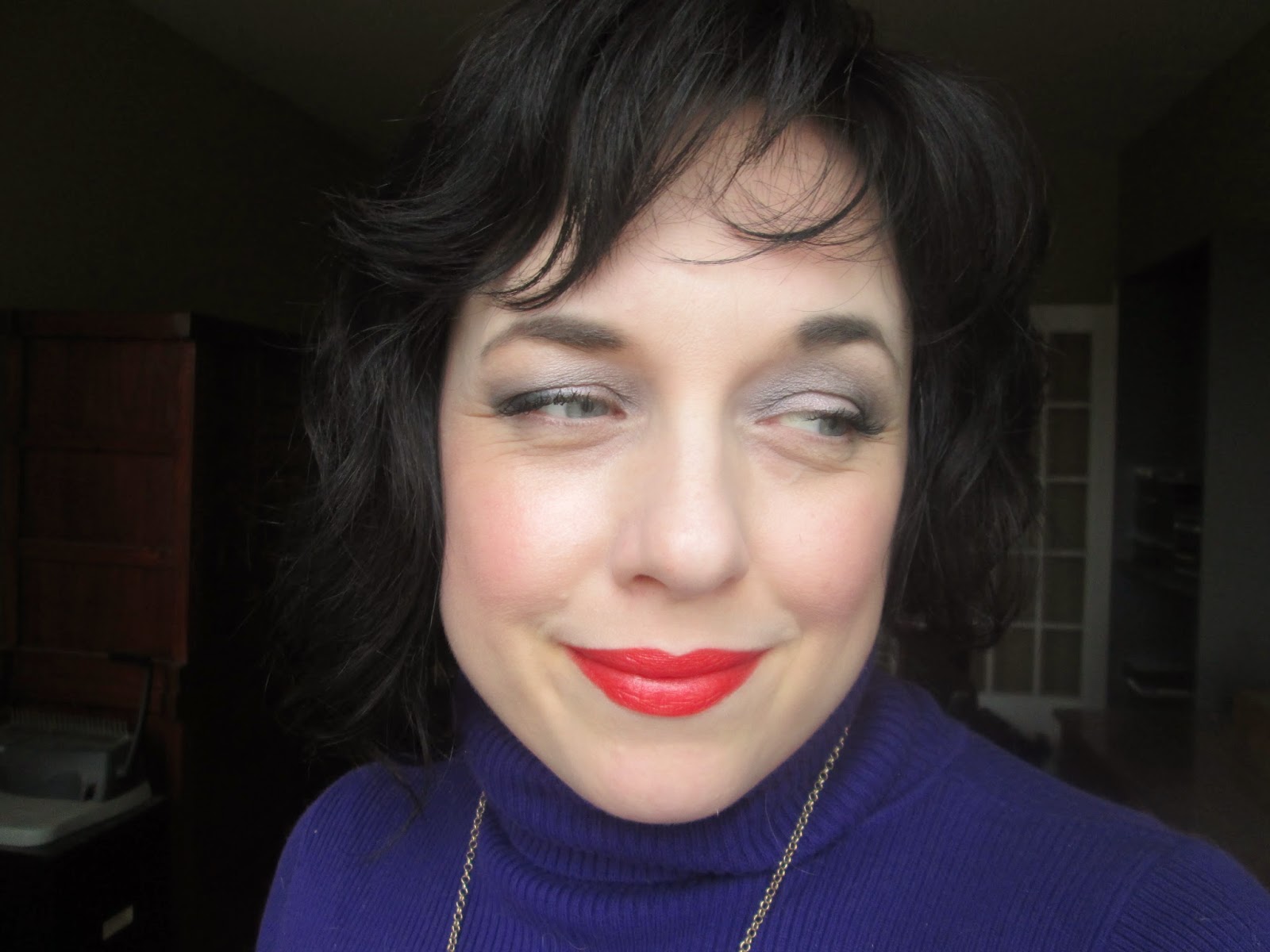 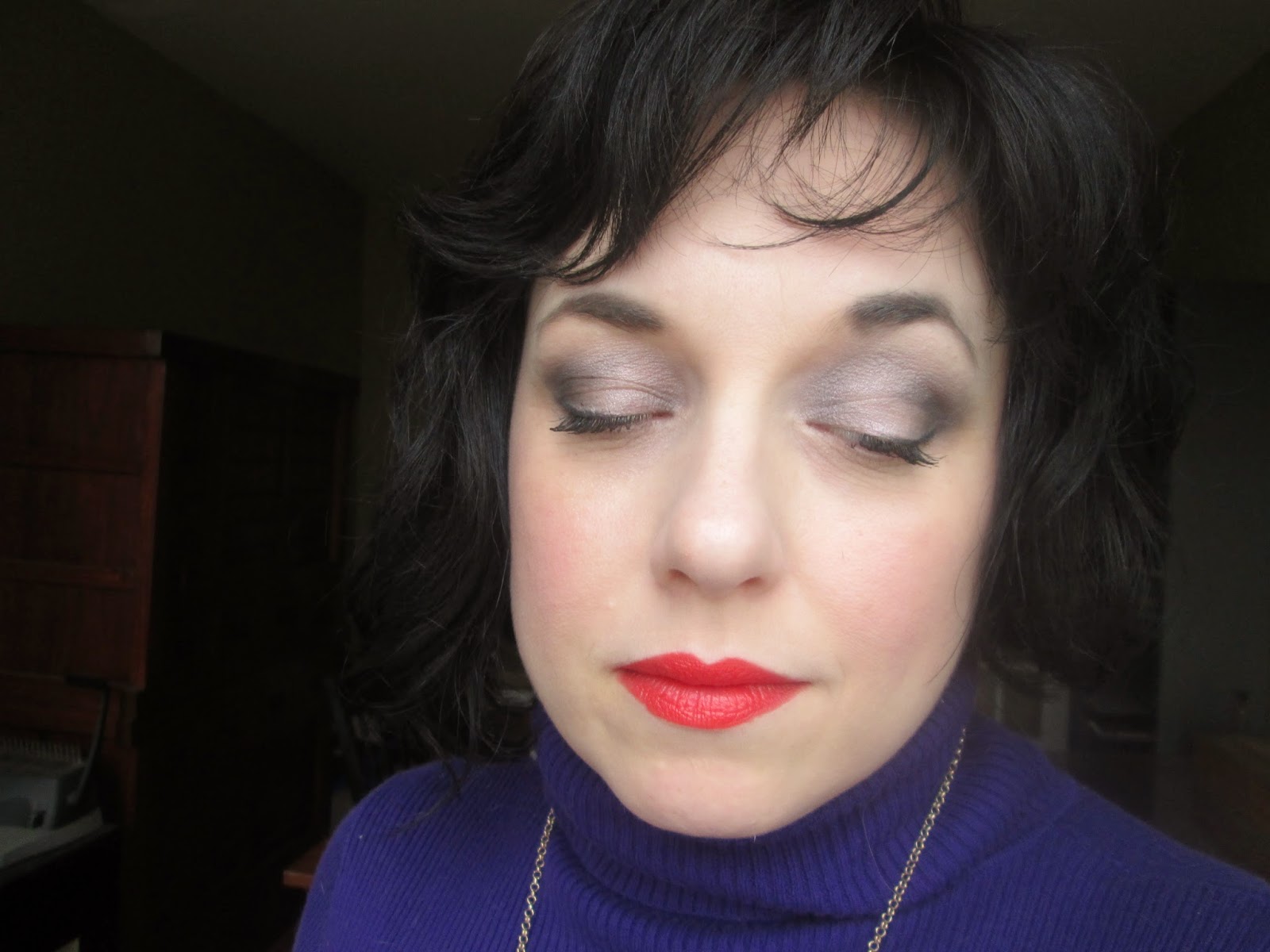 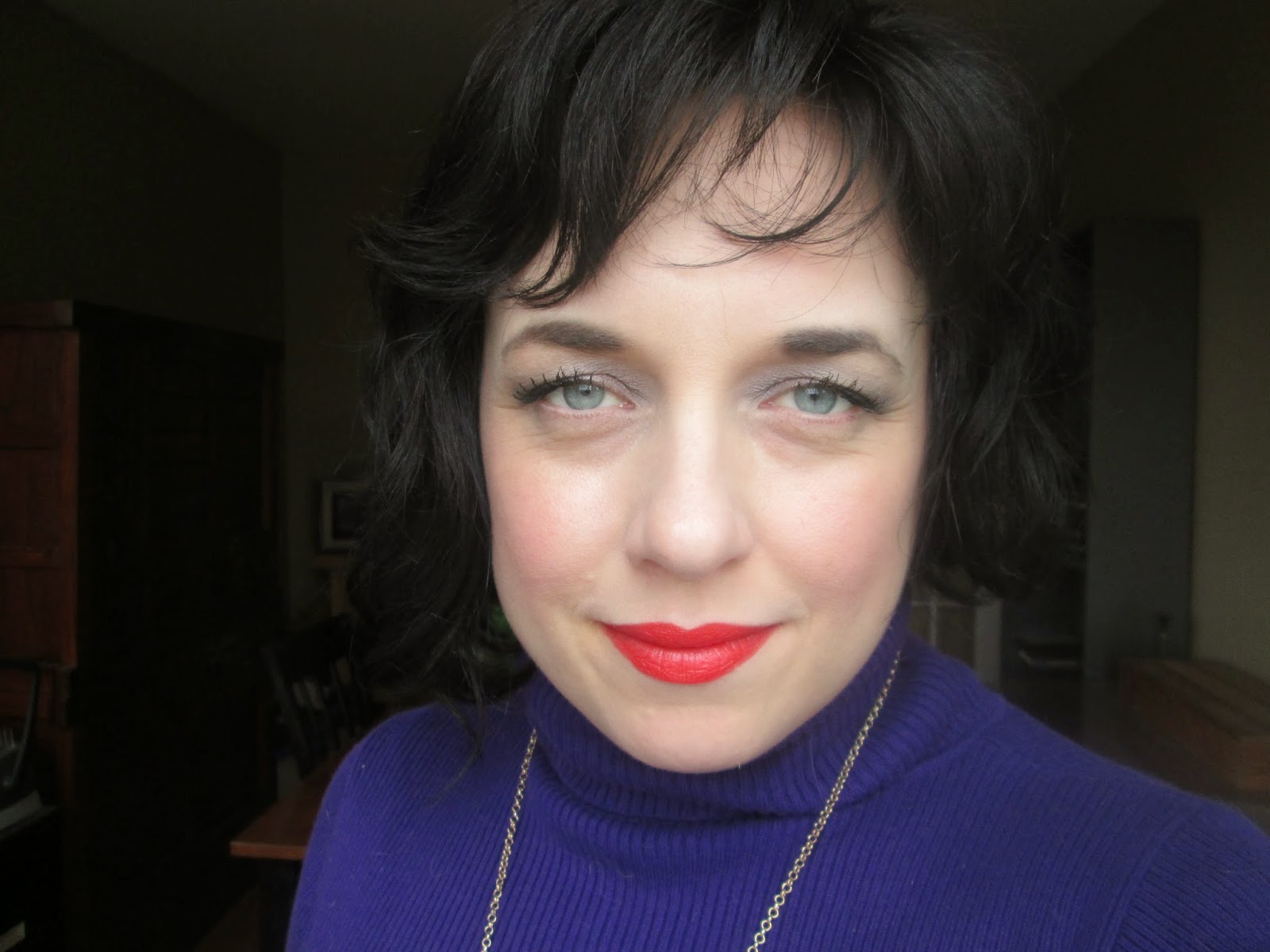 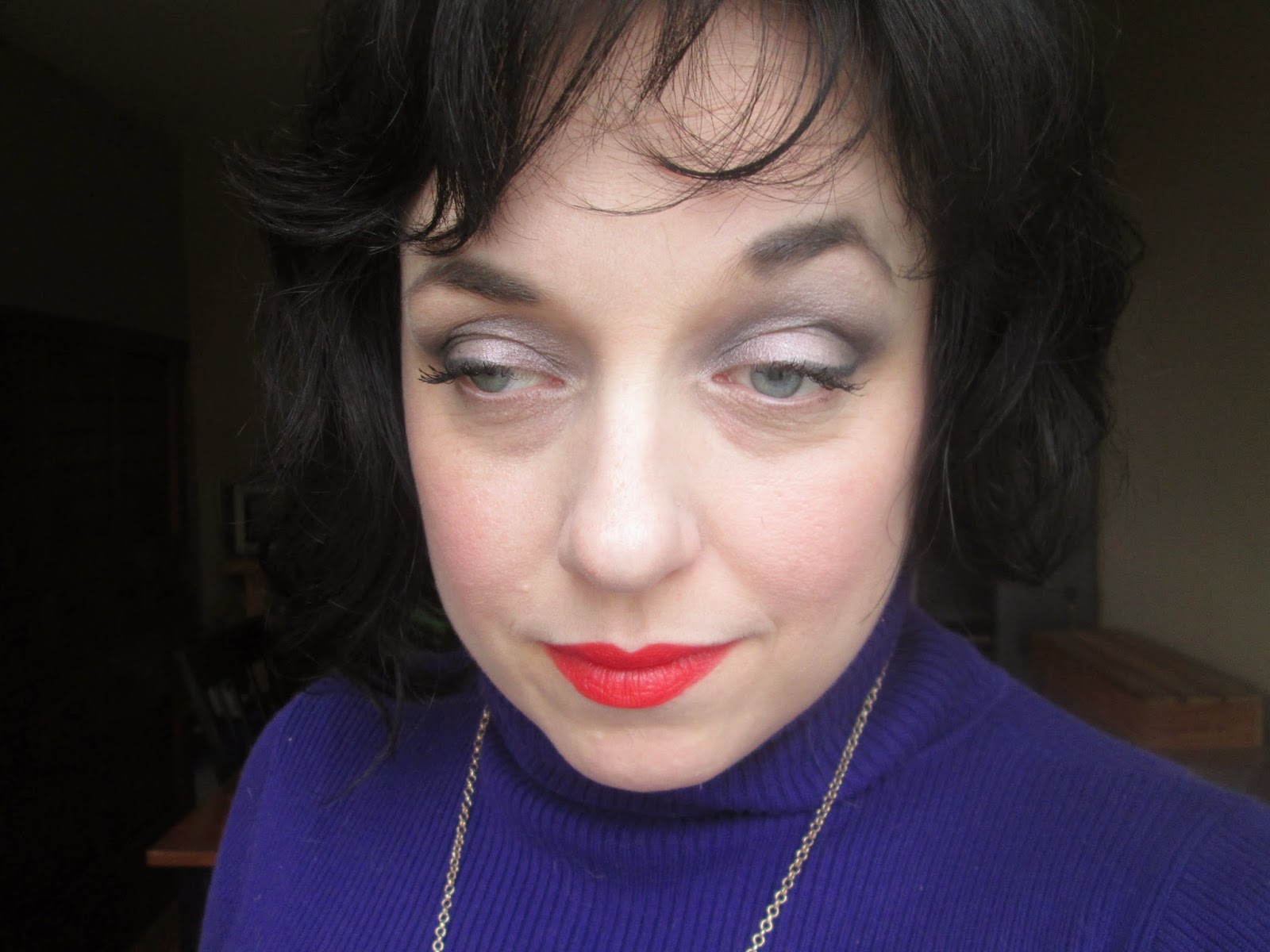 typing this up made me realise that i haven't gotten around to reviewing that blush yet. bad blogger! bad! bad!

"genna" is definitely one of those shades that doesn't require a lot of adornment, which is why i decided to go with a high contrast but non-colourful look. rouge g being pretty much my favourite lipstick formula, it makes sense that this is my very favourite warm red shade. i love how cheery it looks. i love the fact that the formula is not just forgiving on lips, but makes them look plumper and smoother. [i did some damage to my upper lip earlier in the week and this is one of the few formulas i've been able to wear since.]

"les noirs" is, as you might expect, an exemplary smoky eye palette, but i also find it's one that can work to do a nice "framed" look. i've made minimal use of the heavier matte black, applying it in the outer angles and even then, blending the frosted black over it and into the crease. the satiny grey i applied with a fluffy brush on the inner lids and corners. i didn't want it to look severe, just shaped. the centre of the lids and the area along the brow is done with the highlight shade. because it's a little softer and more shimmery than a true white, the effect isn't sharp in that 1960s way, but more of an everyday take on that theme. these shadows blend like a dream, although the matte black is a bit prone to fading, so things looked softer at the end of the day.

style two: roll with it

it's the rouge bunny rouge palette again. i can't help it, it's just so easy to reach for... [how can any makeup be "difficult to reach for"? -ed.] on the other hand the blush i used here is one that just constantly seems to befuddle me. i feel like it should work, but it rarely does. i thought it was ok here, although the magic really comes courtesy of the ambient lighting powder. 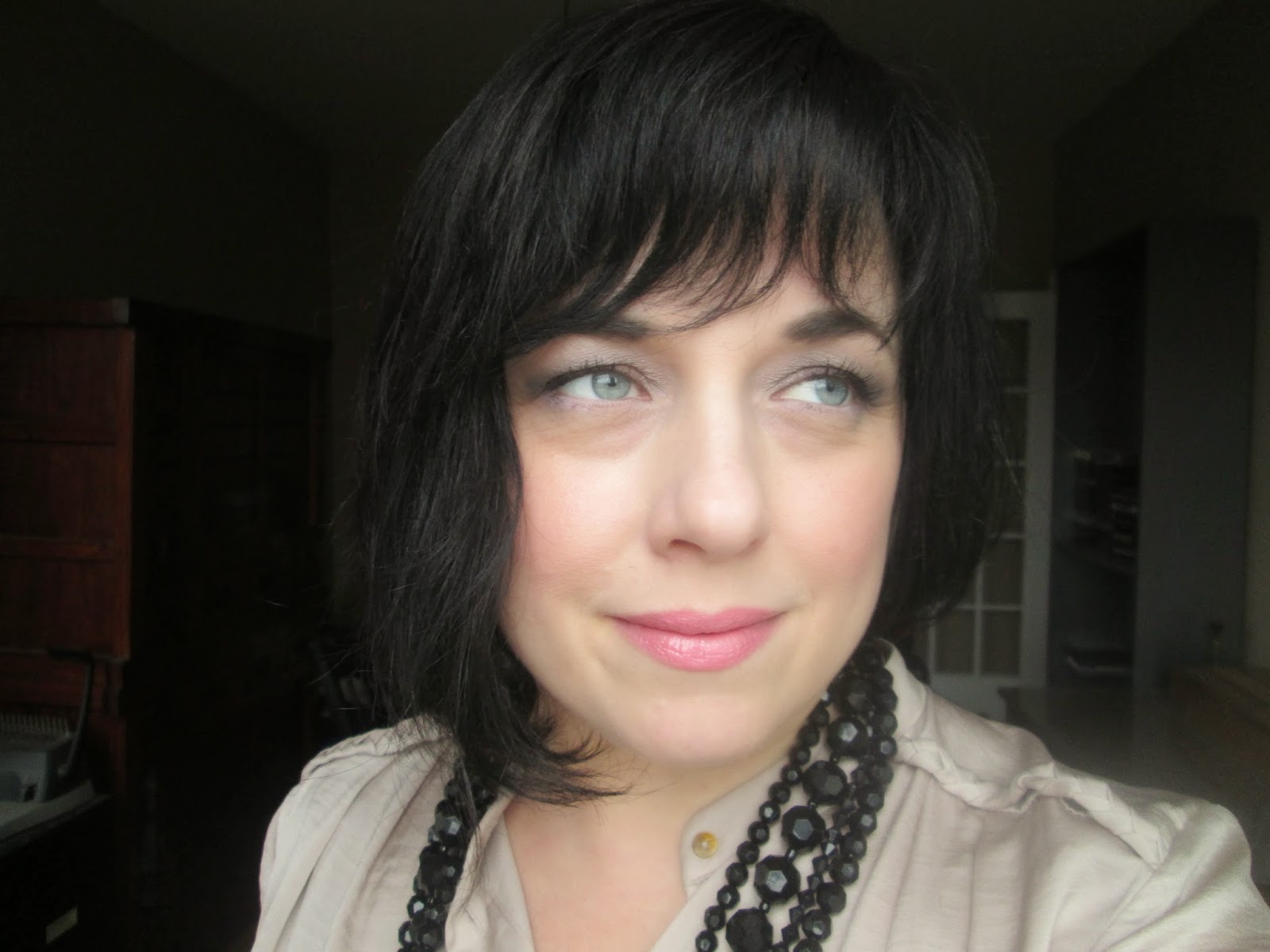 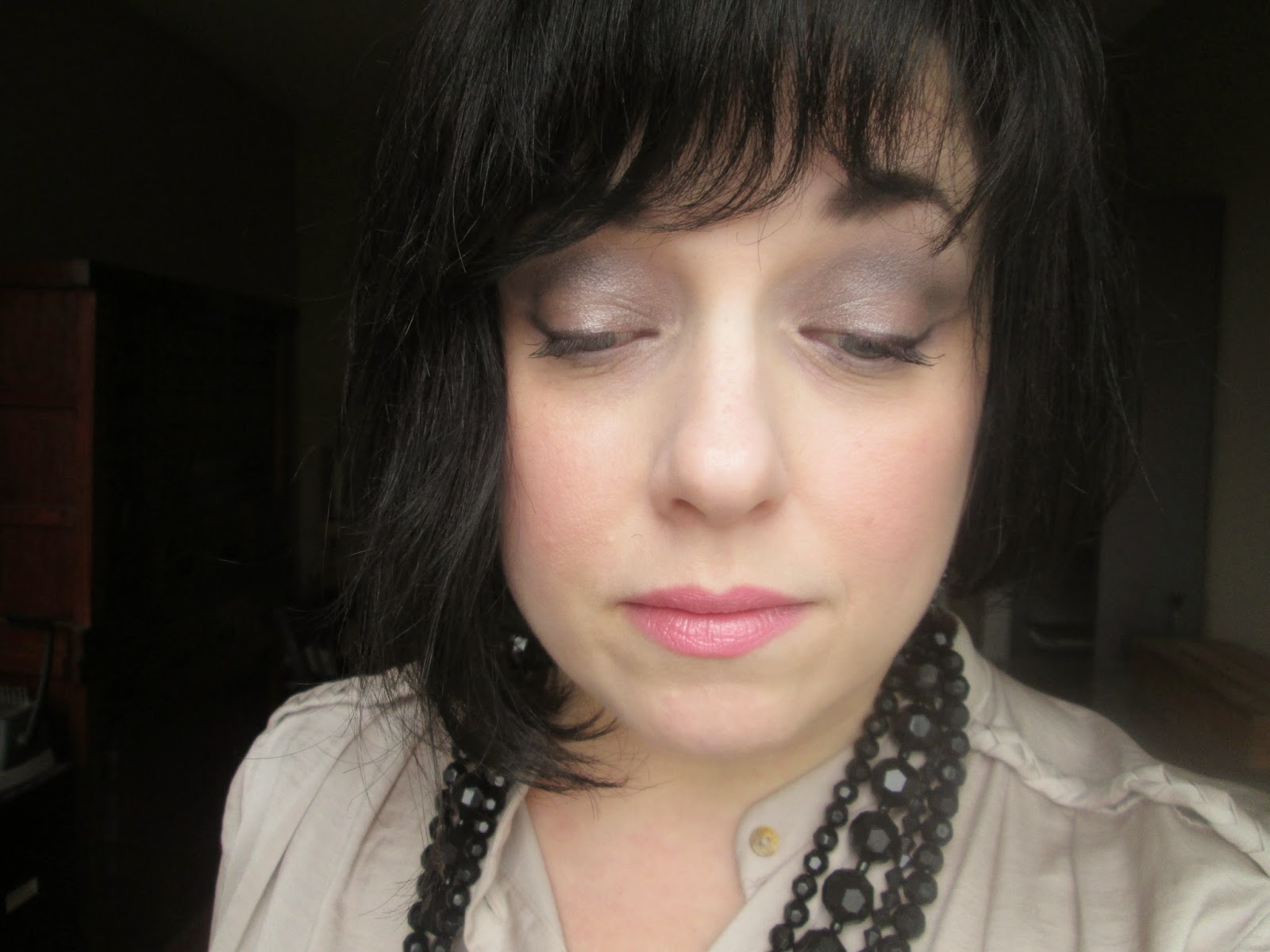 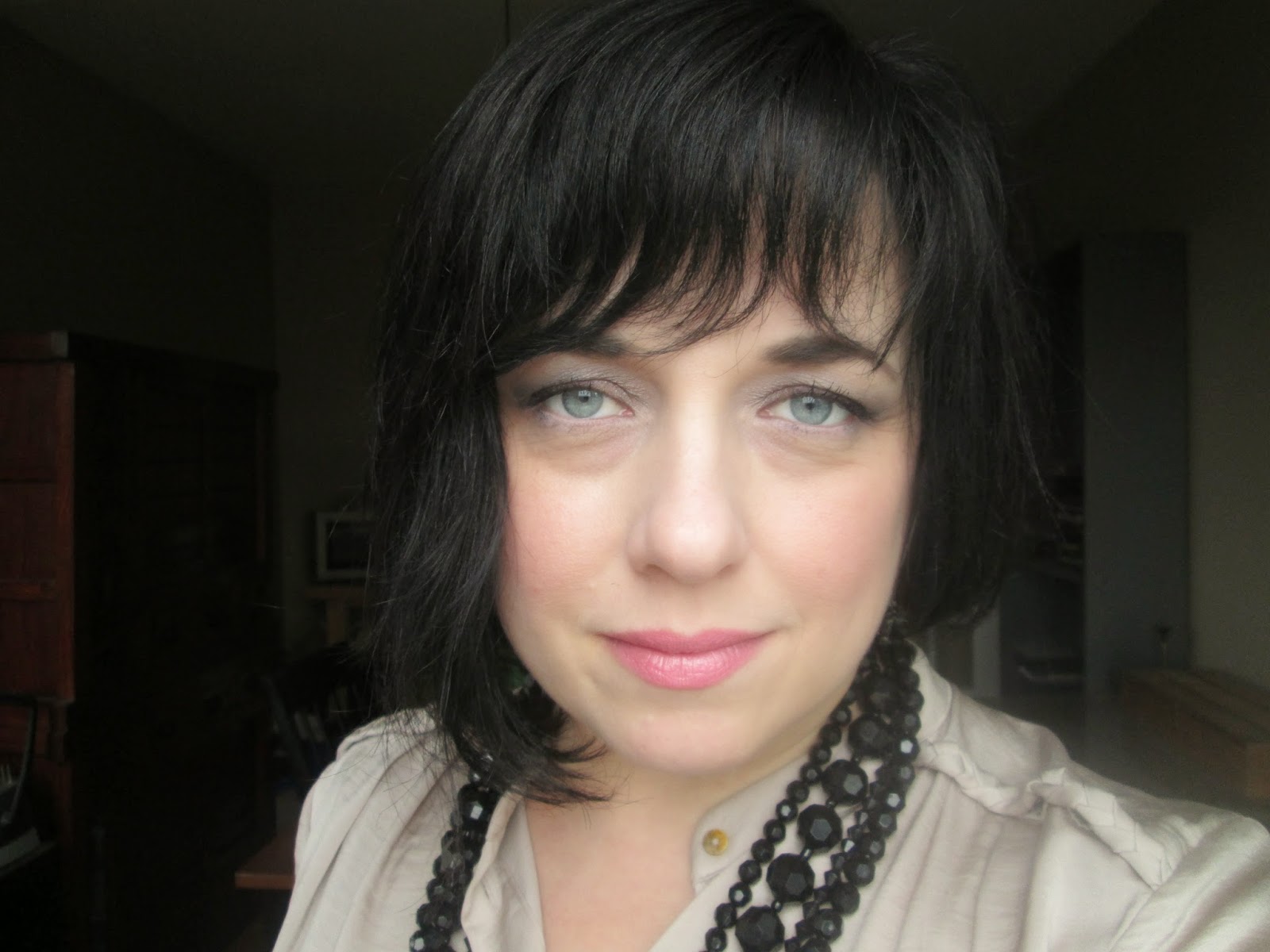 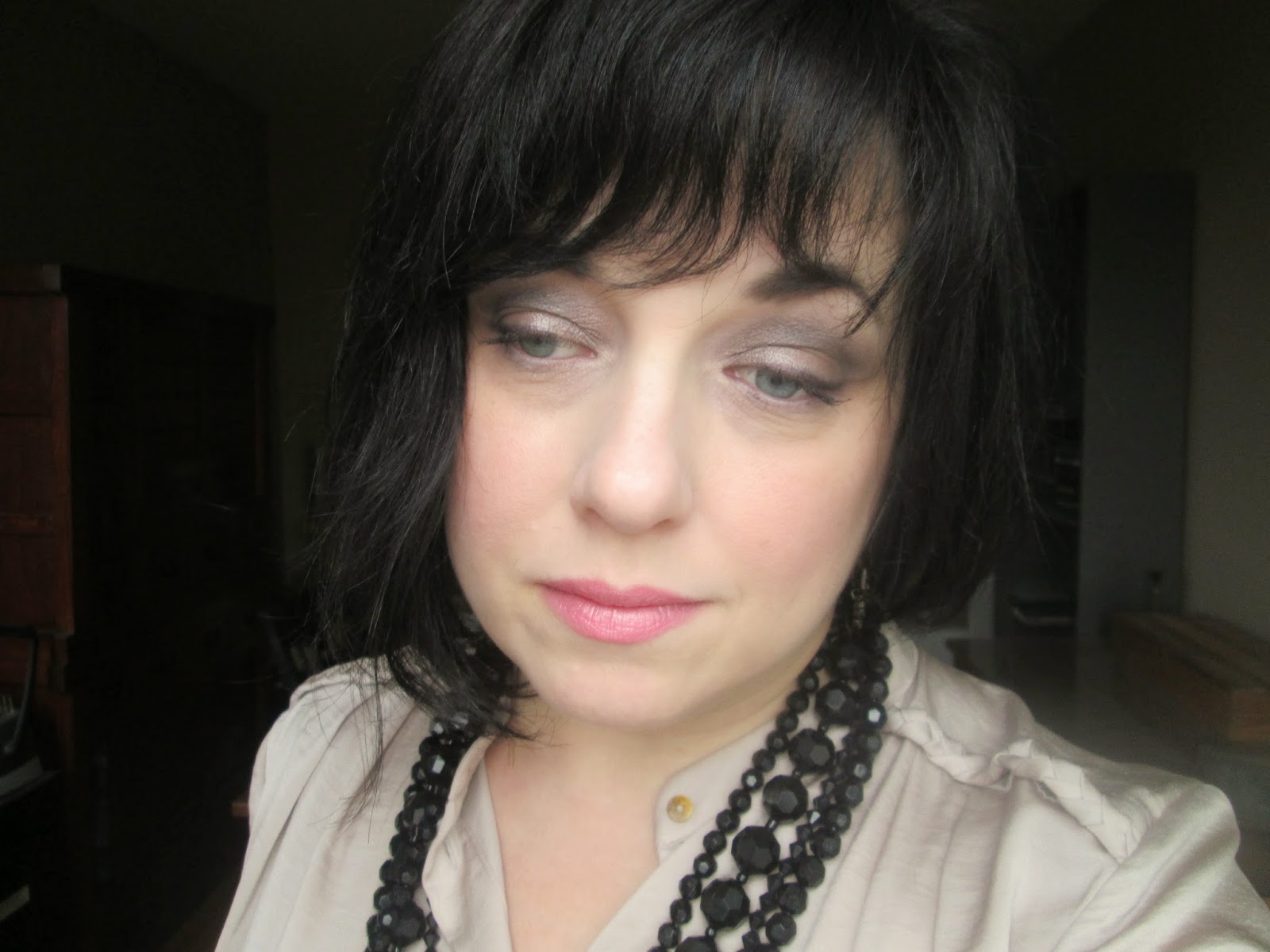 the base ::
same as above, actually

i used three shades from the "chronos" palette here: the rosy taupe over most of the lids, with the warm champagne beige on the inner corners and the deep purple-grey on the outer angles. i didn't get a great night's sleep, so "celeste" is being used on my lower lids in this case to help hide some pretty serious eye baggage. [we talked about this.]

the lip pencil i used underneath was a limited edition one and i don't know of a great dupe for it. nars matte lipstick in bolero looks like it might be close, but more peach, less pink. and by the way, can anyone recommend a lip pencil that doesn't bleed but that doesn't feel like i'm punishing myself for something by applying it? i don't notice it so much with the gloss, but it's still a fairly uncomfortable procedure.

this is clearly a much "foggier" kind of look, but i find that the lip still gives enough brightness that i don't look too washed out. people who have softer colouring than i could probably do without the liner, since the gloss would probably add enough colour on its own. on me, it's lovely, but tends to look very sheer within about half an hour of application.

it is supposed to remain rainy and overcast for pretty much the next week here in montreal, which is probably enough time for me to get pretty sick of the soggy and start wishing for those crisp, cool october days i remember from my youth [and the week before last -ed.]. in the meantime, i'll undoubtedly come up with new and slightly odd ways of painting myself, but for now, these are the two edges of the pendulum's arc. [note: the pendulum tends to swing differently when i'm going out for the evening, because dark lips.]

p.s. :: i've gone back to urban decay's naked skin, which has become my fall-back foundation. i love it, but i was recently trying out a sample of yves st. laurent's new "fusion ink" formula and i feel like that raised the bar. ironically, i'd been wearing ysl "teint touche éclat" for a couple of months and while it's a beautiful product, it's too glowy for my combination skin, especially in the summer. it seems like i just can't win sometimes.