this is a new thing i'm trying on the blog, based on a fascination i have with various underrepresented, marginalised or misunderstood cultures around the world. i tend to spend a lot of my late night bouts of "i have insomnia and i need something to think about so that i don't shoot myself and anyone who tries to stop me" reading up on these subjects. since this blog has always been a repository for the stuff that clogs up my brain [as well as a place where i can curse at things and channel the discussions with the voices in my head], i figured i might as well share some of what i've learned.

so, as a first salvo in the war on "i've never heard of those people", i've decided to tackle the basques. not literally, because i'm pretty sure any one of them could take me. but as a subject.

a lot of people have heard of the basques. myself, i grew up in an area of the world near an entirely anglophone town with the name port-aux-basques, without ever giving much thought to what the name meant. there are also delicious pastries and delicious-looking lingerie that bear the name, but long before any of that, the basques were a european people. there is something undeniably fascinating about the basques, something that tantalizes historians and anthropologists, both professional and amateur.

it starts with the basque language itself: euskara. it immediately presents a conundrum because it is related to no other language in the world. for many years, linguists have been positing links to the celts, to languages from the caucasus, to languages now extinct [or which may never have existed to begin with]; the fact remains that basque has no links to any living language. to an outsider, the language looks a little like it's messing with you a little, with words containing an unsettling number of k's, x's and z's. basque scrabble must be incredibly frustrating. [side note: there is no term for a basque person in their native other than someone who speaks the language. that seems to be the only requirement for inclusion.]

what makes this particularly interesting is not merely the fact that it is isolated from all other languages- both japanese and korean are isolate languages spoken by far greater numbers of people. what is so intriguing about basque is that it is an isolate language surrounded by other languages that are very obviously related and whose historical development is well understood. we know that at some time in the distant past, people we now call indo-european spread over great swathes of the world and gave us a the largest linguistic group on earth, encompassing everything from english to latin to russian to sanskrit. but the basques aren't part of that story: they are the sole remnant of the mysterious people who were there before, a connection to europe's most distant past. it's hard not to be drawn in. 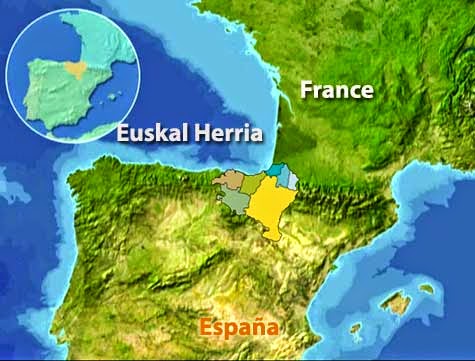 it's unclear how exactly the basques survived the otherwise obliterating advance of the indo-europeans. there is evidence to suggest that people related to the modern-day basques may have inhabited parts of the iberian peninsula for thirty millennia, but the axis of their culture seems to have always been the area in the northeast of spain and southwest of france, which was clearly surrounded by the linguistic invaders. but somehow, the basques persevered and even thrived. [side note: basque culture is sometimes mistakenly identified as matriarchal. this is not strictly true, however women in basque society did enjoy greater property rights than in many areas of europe and women were allowed to hold offices which were in other areas the sole purview of men.]

for many years, anthropologists believed that basques could be useful in studying the history of european genetics, since they were believed to be "living fossils", genetically different than other europeans. however, dna testing has indicated that this belief was mistaken. whatever their original genetic composition, modern basques are much closer to modern spaniards than to neolithic era tribes.

nonetheless, there are some distinctive basque traits. for instance, basques have the highest rate of rh negative blood anywhere in the world. [side note: this itself may have placed a limit on the size of the basque population. women with rh- blood generally have no problems conceiving, but when the fetus is rh+, their immune systems sometimes mistakenly identify the fetus as a pathogen and attack it.] type o blood is quite common, while type b blood is almost unknown. more subjectively, scholars refer to a set of typical basque features: long straight noses, thick eyebrows, prominent, squared chins and long earlobes. i'm certainly no expert, but i have to admit that those self-identified as basque did have those features [i couldn't swear to the ears]. i don't know... i feel like there might be something to this. let's have a look, shall we?

here's agnès souret, a french basque who became the first ever miss france in 1920:

[side note: arteta plays for arsenal in the british premier league, but athletico bilbao, the spanish la liga team based in the basque homeland has a policy of hiring only basque players, in spite of the considerable limits this places upon them. there is a basque national team as well, but since they are not affiliated with any professional league, they're ineligible for international competitions like the world cup.]

while modern basques are spread widely throughout the globe, with huge populations in certain parts of america and canada and even larger ones in south america [especially chile, where they made up almost half of immigrants in the seventeenth and eighteenth centuries], they are identified principally with the area of northern spain where they have traditionally lived. basques on the french side of the border are treated simply as french citizens, but in spain, the basque territories have a considerable degree of autonomy in their home provinces of navarre, alava, biscay and gipuzkoa. historically, the basque homeland has had a tempestuous relationship with spain, resisting attempts at centralization and fighting to maintain their autonomy. things grew especially tense under franco's regime, which gave rise to the euskadi ta askatasuna separatist movement, or eta. much like the irish republican army, eta employed both political and violent means to achieve their aims. in 2011, eta announced a permanent ceasefire and has morphed into an entirely political organisation.

[side note: when the 2004 madrid train bombings occurred, there was initially some question as to whether they had been perpetrated by middle eastern terrorists identifying with al-qaeda or by eta. i asked a friend of mine from madrid what he thought and he immediately responded "eta would never do that". i should add that this was someone who absolutely opposed eta and their aims, but still, the bond between the basques and the spanish went deep enough that it bordered on insulting that i'd even imply that eta was behind the attacks. that's always stuck with me.]

being a relatively small and isolated culture for so long, basques have been able to retain many of their traditions [even as their genetics have shifted], including their distinctive cuisine, infamous cattle marathon, and lesser known custom of scaring the living hell out of bloggers who research them in the middle of the night. that said, most basques identify as much with spain as with the basque country and while there are certainly efforts to support the basque language, it remains defined as a right within the territory, whereas education and service in spanish is a constitutional necessity.

i'm interested to see whether recent events in scotland will reignite the basques' national fire. longtime cultural considerations aside, the basque region of spain has resisted the central government's austerity measures and has greatly outpaced the economic performance of the rest of the country. per capita income is higher in the basque territories than anywhere else in spain and unemployment is considerably lower. those factors alone might provide motivation for a reinvigorated separatist movement. [spain has said that they will never agree to an independence referendum, which probably says a lot about how they think the result would go.]

so there you have it, the first instalment of "world wide wednesdays". please feel free to leave feedback or ask questions [keeping in mind that i'm not an expert in any of the things that i blather about] or make suggestions for future editions.