mental health mondays :: are we doing it wrong? 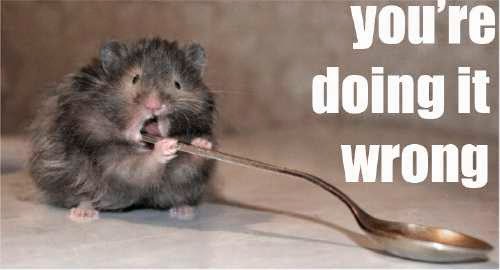 there's a small but growing body of evidence that everything that we know about depression and treating it may be at best misleading. for many years, scientists and psychiatrists have operated on the belief that depression is triggered by the brain's inability to maintain proper levels of the neurotransmitter serotonin. for decades, medicines developed for the treatment of depression have hinged on the belief that in order to overcome the condition, it was necessary to ensure a greater supply of serotonin in the brain. maoi's [monoamine oxidase inhibitors if you feel comfortable pronouncing it] were designed years ago to retard the enzymes that broke serotonin down, leaving more of it to enjoy. newer drugs- developed because maoi's have difficult side effects and can cause significant problems when taken long term- slow the process of serotonin being sucked out of the part of the brain where it is needed for mood regulation, allowing it to baste in its own delicious juices for longer. these ssri drugs [selective serotonin reuptake inhibitors] have become some of the most widely prescribed drugs in north america and there has been a lot of criticism that they are in fact over-prescribed, handed out too soon and to people who may not need them.

now, there are questions about whether or not serotonin even has any effect on depression. a study tracking mice bred without the ability to produce any serotonin [if i think too hard about the creepy implications of that, i'm going to need more than an antidepressant] showed no signs of depression. according to what we "know", that should be impossible, but it turns out that the little buggers were hyper-aggressive and compulsive [perhaps backing the theory that serotonin is important in treating behavioural disorders like ocd and drug addiction], they functioned fairly well under stress.

this is one more disturbing bit of news about a class of drugs that is given to millions every year and whose long term effects are only now coming to be understood. it dovetails with an earlier study [actually an analysis of several studies] that indicated ssri's are don't provide much more help than doing nothing. more interestingly, the study showed that they were only helpful in treating the most severely depressed people and that the milder the case of depression, the less of an effect they had. you would think that the opposite would be the case- that those with the mildest forms of depression would benefit the most, while those who were more depressed would need higher doses or additional treatments to pull them out of their black holes. instead, the results indicate that while having more serotonin is better than nothing, it's more of a bonus than anything else. the real cause [and cure] seems to lie elsewhere.

there are those who have voiced the opinion that the reason that ssri's don't function on people with milder depression is that their serotonin levels aren't what's at issue and that they might be better treated without drugs, rather than toying with neurochemicals that aren't out of balance to begin with. and that viewpoint deserves consideration. but the fact that even the most severely depressed patients saw only a slight improvement from the use of ssri's indicates that there are probably better areas to look for a panacea.

the complexities of the human brain are such that we may never be able to definitively say what causes and what inhibits depression- or rather that, every time we say it definitively, further research is likely to undermine our assumptions. for now, the debate continues and, one hopes, research into better treatments does as well.