making faces :: think outside the palette 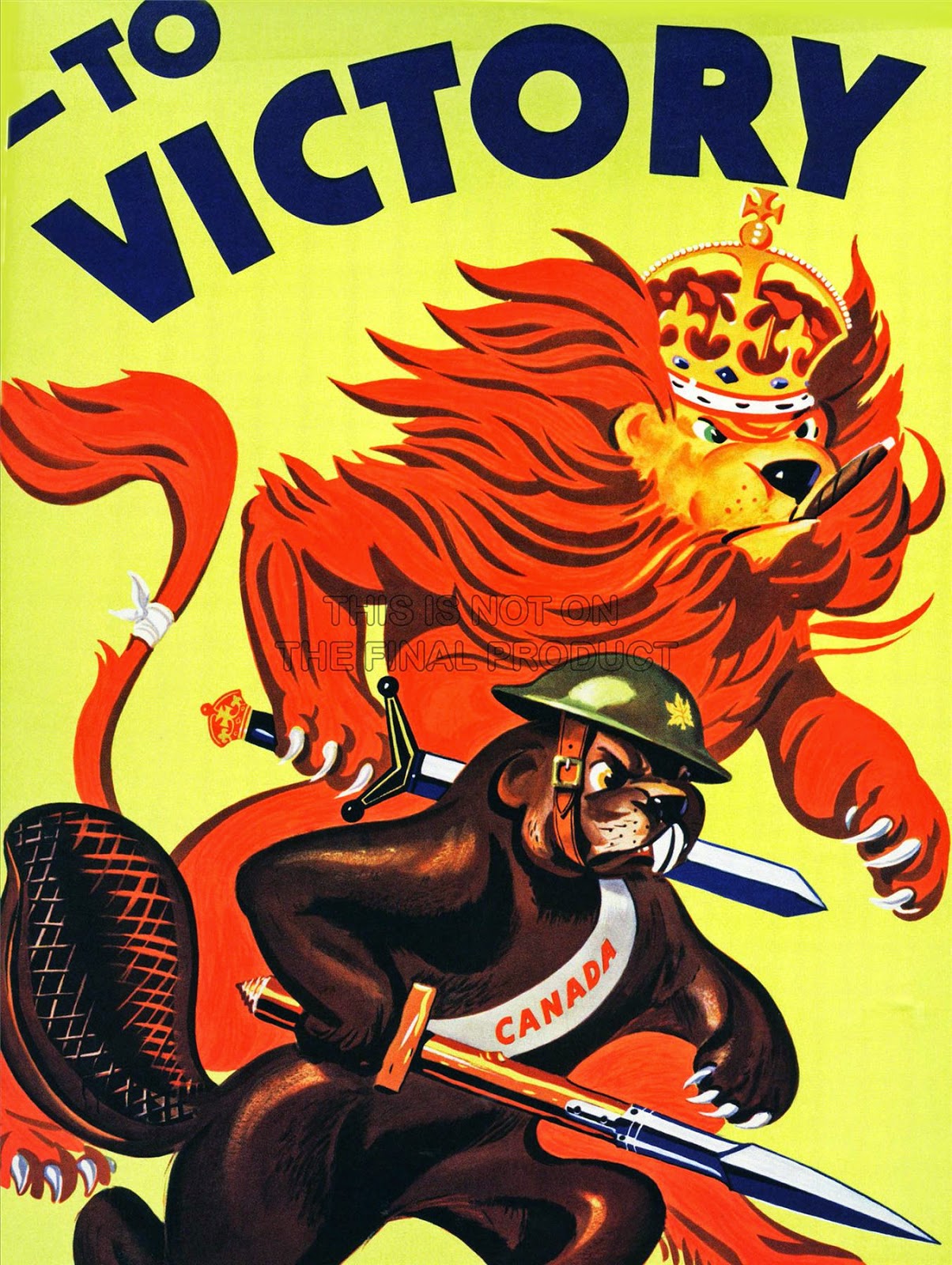 remember back when i was talking about summer collections and i got a little frustrated because i couldn't get nars' "tropical princess" eyeshadow duo to work the way that i wanted? no? it's ok, you can read about it here.

we've moved headlong into fall collections [even though i continue to support some kind of law that stops cosmetic companies from selling seasonal collections until that season actually starts, or at least until the month when the season actually starts, because it's like being able to go to the future to buy makeup and do absolutely nothing else, which would be lame, although since we're somehow in mid-september i have to admit that it's probably ok to talk about fall and should get back to what i was doing], but before i rush into the latest that nars has to offer [and i will], i wanted to work a little harder to get something going with this beauty that just never seemed to come together for me.

after my previous experiments and some reflecting on my journey through seasonal colour analysis, it occurred to me that part of the problem was that, while the colours have an iciness to them that i should be able to support, there isn't a huge level of contrast. on a lot of people, that wouldn't be a problem, but wasn't one of the things that i discovered that my particular complexion seems to demand an exceptionally high contrast level? [spoiler: yes, it totally was.]

so with that in mind, i thought i'd try to introduce a little more "zing" to the whole look by combining "tropical princess" with some other shades i have at my disposal. and the results? 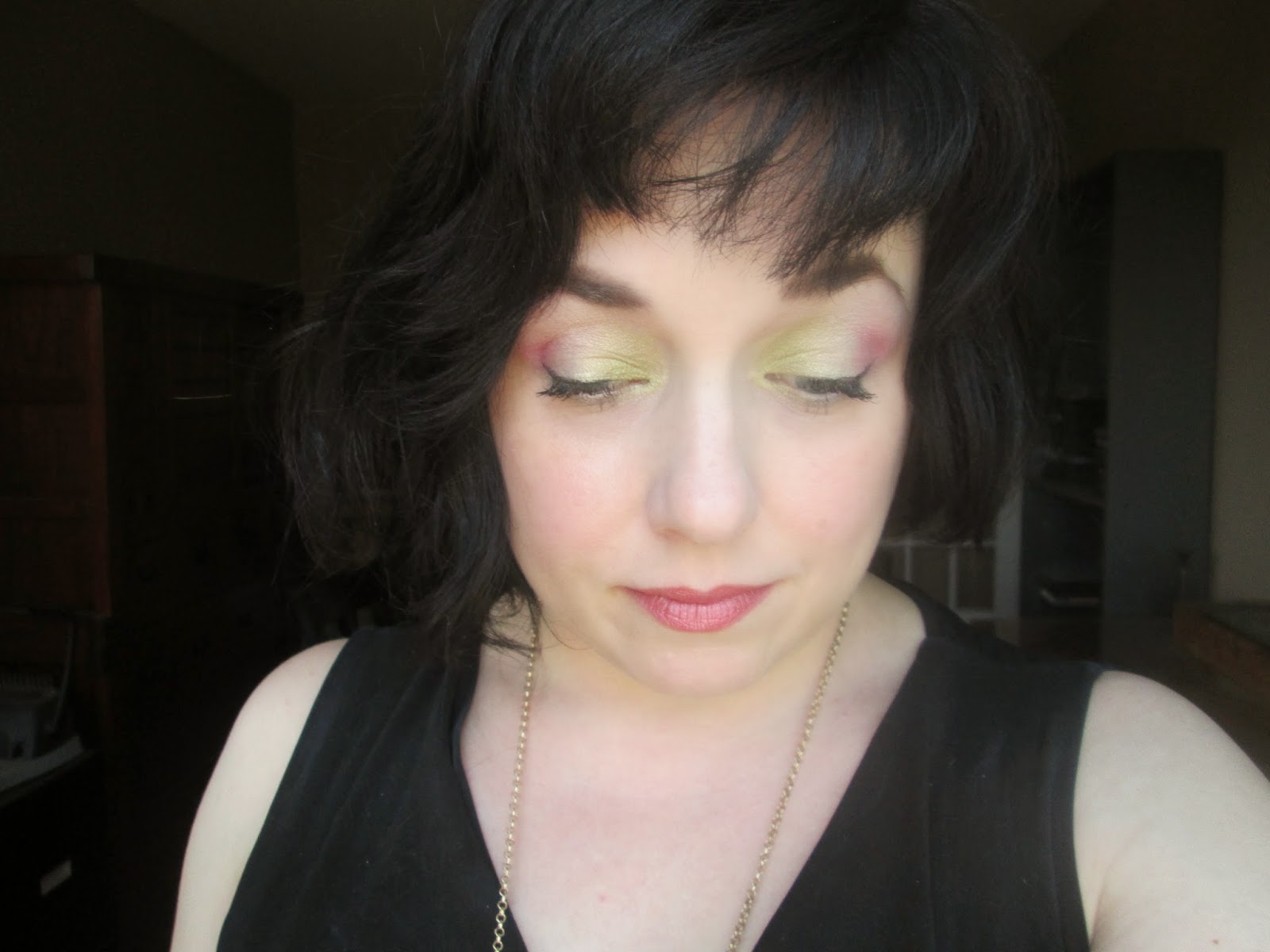 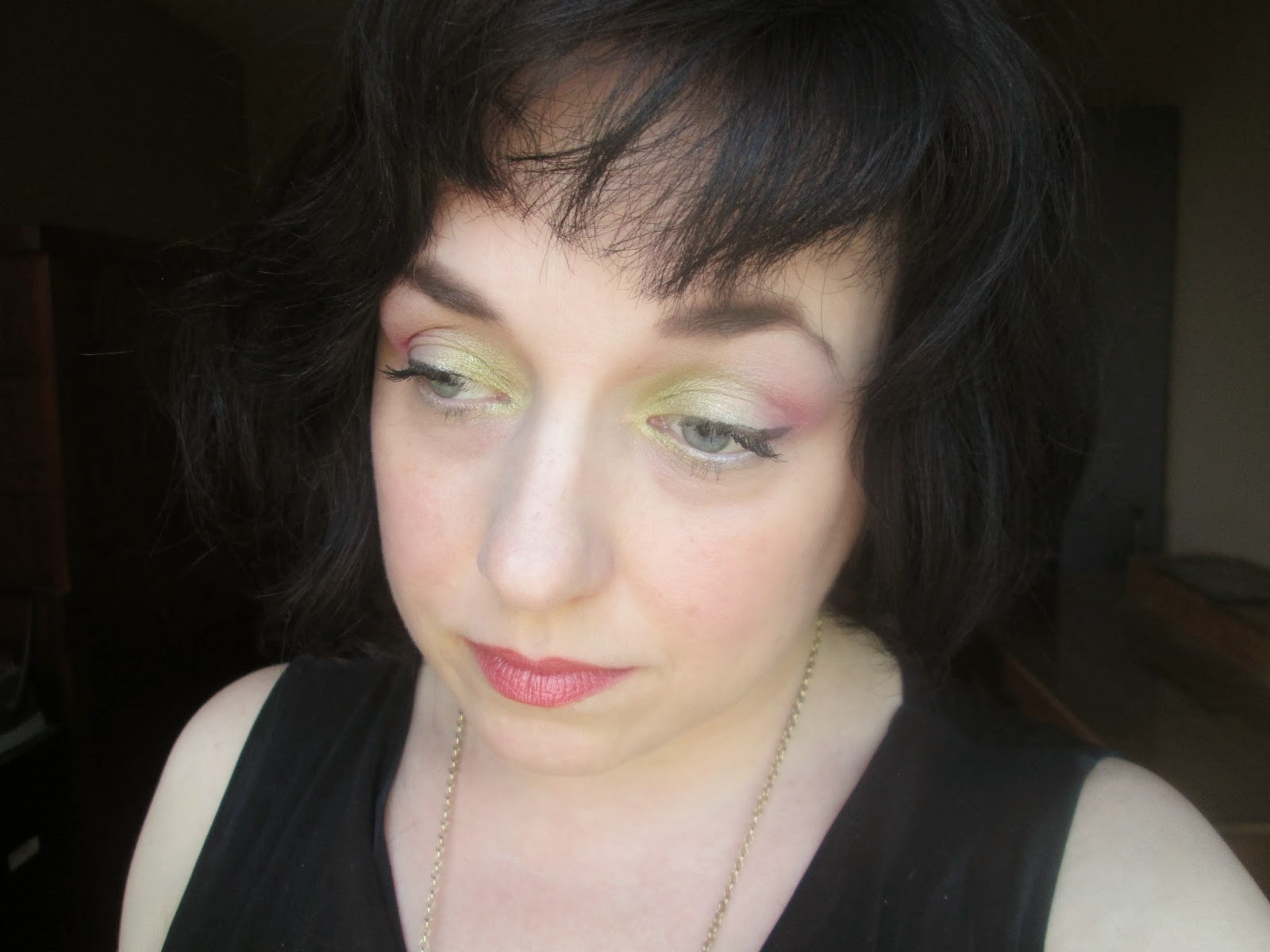 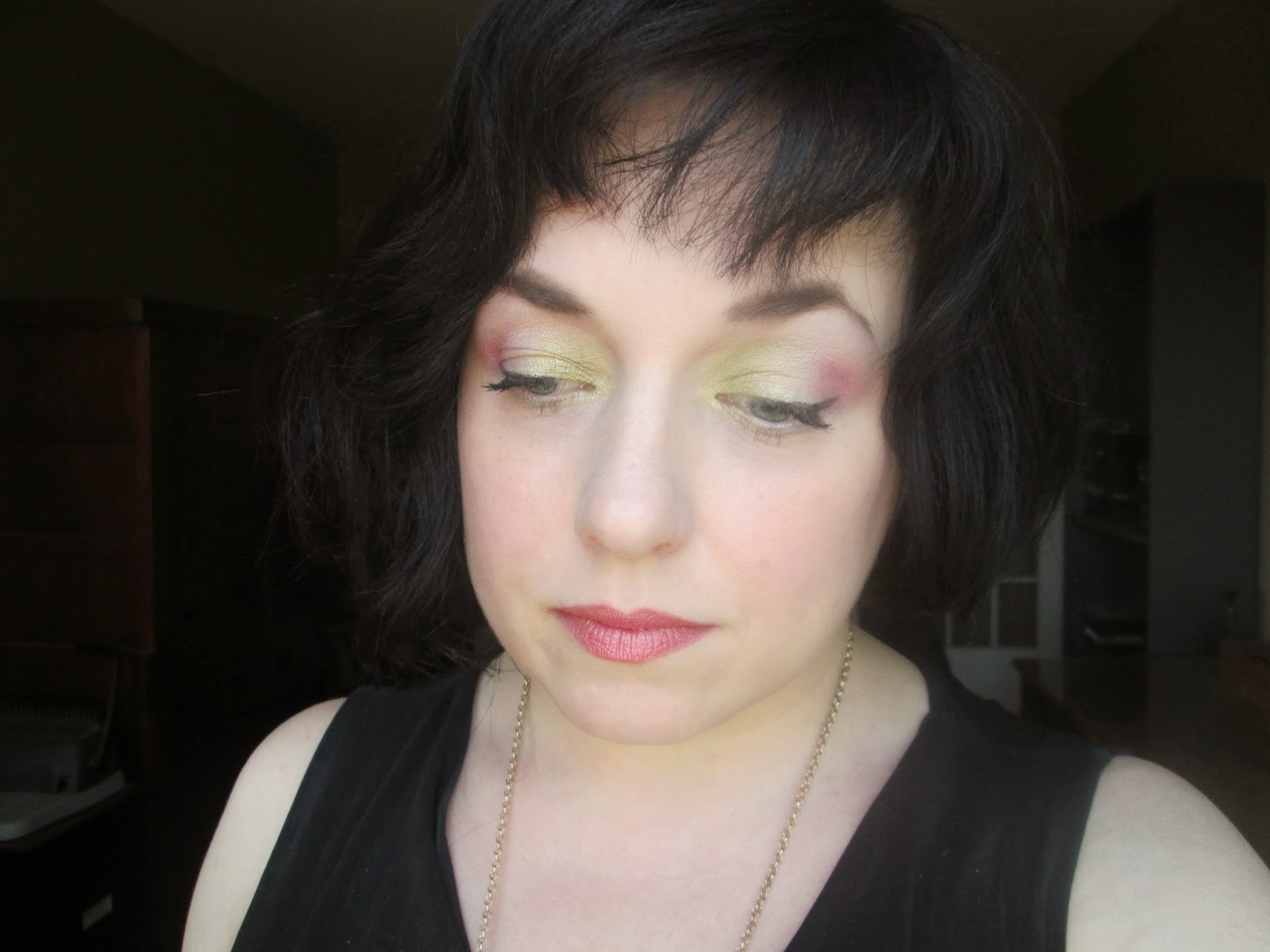 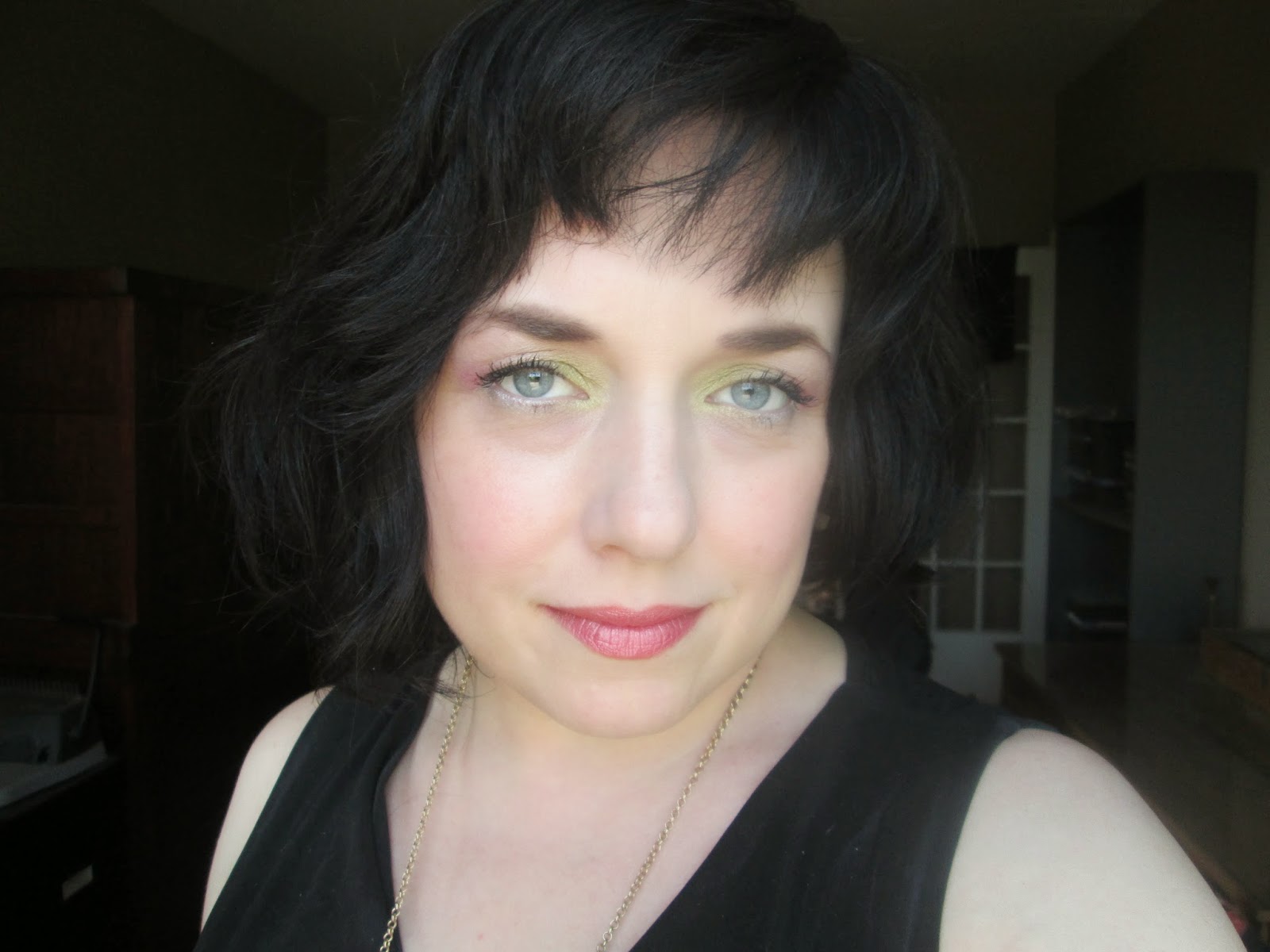 well isn't that much better? i think it is. you can think differently if you want, but i find that creating a little more variance in both texture and colour strengthens the look and makes it more interesting. where the shades sort of blended a little too well when used alone, i find that here, everything looks like it's been colour blocked, which is something that does a better job of balancing my winter-blend-of-some-sort complexion. here's what's happening on the eyes:

interior angle [not just the corners, but all around] :: chartreuse shade from "tropical princess"
centre of lid  and along the brow bone :: the very light green [shade #3] from dior's "blue lagoon" palette
outer lid :: mac "passionate" [a bold red-pink]
lower lash line, blended around the outer edges of "passionate" and directly under the brows :: icy lavender shade from "tropical princess"
along the upper lash line :: stila sparkle liner "starry" [shimmery gunmetal]
ysl effet faux cils mascara in "noir radical" on my lashes

since "blue lagoon" and "passionate" are less frosted than the "tropical princess" shades, they break up the shimmer fest that made the colours too prone to sliding into one another [for my tastes- yours may be different]. plus the use of the lightest colour on the lower lash line incorporates this little trick to make my eyes look brighter.

the rest of the look is pretty simple- i wanted to keep it about the eyes. the base is my usual [lately] combination of nars radiant creamy concealer in "vanilla" and ysl teint touche éclat foundation in "b10".

lips :: guerlain rouge automatique lipstick in "cherry blossom", truly one of my favourite pinks ever.

it's worth mentioning that i find this looks less dramatic on me than it might on others, which is just further evidence of my seasonal colour type being one of the two "brights". also, the shape of my lids means that a lot of the colour is hidden most of the time, which is one of the benefits of hooded eyes they never tell you about.

i wanted to share this because it was starting to seem like every beauty post on the blog was a review, which is fine as far as it goes, but the fact is that i'm never going to be first out of the gate with reviews, nor do i want to spend all the money i'd need to in order to be able to review everything i want. [that said, i have a queue of things i need to review as soon as possible.] also, when i started doing beauty posts, it was never my intention to simply write reviews [which others can do better than i], but to write about topics that were related, in my brain. thank you for staying with me during that tangent. honestly, it was also an opportunity to show a look that incorporates bright green and bright pink, which is a colour combination i love to the point of perversity.

i also thought that it might help some of you who had an item you really liked, but struggled to like on you. there is always a way, i tell you- show that palette who's boss. i vanquish thee and thy stubbornness, inanimate object that lives in my dresser!

[oh, and the picture up top is a canadian wwii recruitment poster of some sort. you can buy a print of it here. i love the implication that the british lion would turn to the canadian beaver all "hey, there's a fight over here and i need you to help me, but you're totally not going to get hurt or eaten or anything". and the beaver just goes right along with this, because we all know that if there's a fight i lion can't win, beavers would have no problem at all. also, the lion is smoking a cigar, which is probably why they're endangered. no one ever talks about the smoking.]