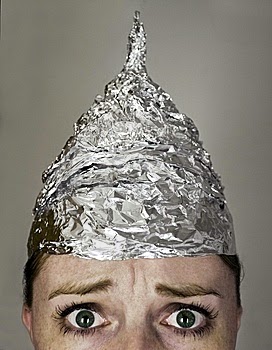 earlier today, i was having a conversation with a friend, who made reference to how she'd felt lately like someone installed a spy camera inside her mind. i'm not sure how that would work exactly, since i imagine that the camera would just pick up a lot of gooey gross stuff and even for that, it would need some kind of night vision. but i have to admit, i think it's just possible that guerlain may have figured out this technology and that they might be using it on me.

i'm always up for guerlain's fall collections, although that may be just a side effect of the spy camera. this year, it's not so much a collection as a celebration of their famous kiss kiss lipstick range- more recently a neglected child, following the attention lavished on their other formulas- accompanied by three unassuming-looking eye shadow palettes. the kiss kiss recipe has been updated and launched in a couple of dozen new shades, all of which are now part of the permanent assortment. i'm less clear on whether or not the shadow palettes will be permanent- i've heard mixed reports [and apparently the spy camera doesn't send me that sort of information]- but they do seem to have taken up residence in permanent displays where i've seen them, so i'm hopeful that they're sticking around.

i picked up one to give it a try before leaping in a bathing myself in lipstick glory from head to toe, a shimmery red called "red strass". that was the name of a shade in the old line that caught my attention, although i never ended up buying it. [probably because it wasn't all new and shiny, although the old packaging was actually shinier, whereas the new packaging is a demi-matte black... i'm even confusing myself at this point] i'm a little hesitant to make blanket claims about the formula after trying only one colour [i've learned from past mistakes], but based on this initial investigation, i am very impressed. i like the rouge automatique formula quite a lot; not quite as much as their über-luxurious rouge g lipsticks, but still a lot. nonetheless, i've found that some of their recent limited edition shades haven't been quite as spectacular as those from the permanent line. some of them have tended to settle in my lip lines and make them feel a little dry after a few hours of wear. not so with kiss kiss. in fact, if "red strass" is anything to go by, i find that it feels a little better on my lips than even the best of the rouge automatiques. the down side of that is that being softer and better at preserving hydration means that they don't last quite as long. that said, i got a decent few hours of wear from "red strass" and it didn't bleed or feather when reapplied., kiss kiss, this could be the start of a beautiful relationship.

the colour itself is wonderful. i find that there's an appalling lack of shimmery reds on the market, which strikes me as strange because what's more ubiquitous than red lipstick in the makeup world? there are attempts at it [mac "new york apple" comes to mind] but most of them are too shimmery, which makes them look more pink, or orange, or brown depending on what the base colour and shades of shimmer used are. [note to self: "shades of shimmer" is an excellent title for a tawdry novel about life and love in the world of exotic dancers.]

the base shade in "red strass" is a cool cherry red that's just short of opaque. it is loaded with fine gold shimmer particles, though, so that while the coolness stands out up close, it looks warmer from a distance. some reviews have mentioned that the shimmer in certain shades felt gritty, but i didn't notice that with this shade. i was slightly aware of the texture when i first applied it [at least as much because i was focused on it], but by a few minutes later, when the product had set, i didn't notice it anymore.

the shade i thought of when i saw "red strass" was mac's limited "viva glam rihanna" [limited but still available as of right now], which is one of the only other shimmery reds in my collection. it's also a red base with gold shimmer, but it's more matte, much more opaque and a bit deeper. it's like the dramatic cousin of "red strass".

at the same time, no matter how much of a lipstick fiend i am, i have to admit that i was at least as excited for the palettes. i always enjoy guerlain's four-colour palettes, but these were special, because the emphasis was placed on rich,  satin-matte textures, something guerlain hasn't done very often before. i picked up "les sables", which looks like an unassuming collection of soft neutrals, but which really, really comes alive on my eyes.

the shades are a shimmery white-peach highlight, a delicate pastel peach rose, a neutral cork brown and a rich tree-bark brown that pulls a little warm. [note :: it seems to pull warmer on others than it does on me.] the shimmery highlight is the sort of blendable frost we've come to expect from guerlain, but the mattes are outstanding. only rouge bunny rouge makes matte shades this well, with the same fatty, unctuous texture that applies so effortlessly. the shadows are not overly powdery, which means that they apply pretty true to what you see in the pan. they don't blend away when you work with them and they'll last all day, even during high heat and humidity.


the colours may not seem as original at first, but there is some magic to them. i think it's the inclusion of the soft peach shade, which pulls everything just a little more pink/ orange. keep that in mind if you're thinking of purchasing: if those are colours you struggle with normally, this might not be the best selection of neutrals for you. i can unhesitatingly recommend it for anyone with blue eyes, because it pulls neither too warm nor too cool, but draws out the blues in a way that is quite noticeable. the first comment i got when i wore this was that my eyes looked particularly blue. my eyes aren't particularly blue, they're more greyish, so anyone with true blue eyes will look electric wearing "les sables".

in terms of comparisons, i found that i had similar shades, but couldn't match any of them dead on.

the highlight shade is pinker than the highlight in "les noirs" [which itself is pinker than a lot of highlighters, not that it necessarily shows in this picture and yikes how have i not reviewed that palette???], but much lighter and cooler than chanel "complice".


the peach rose is deeper and pinker than rouge bunny rouge "bashful flamingo" and, as a result, looks much less neutral on the eye.


the lighter brown was much softer than other browns and neutrals that i have. it's in the same vein as rouge bunny rouge "gracious arasari", but it's noticeably cooler and less pink.


the deeper brown is not dissimilar to the lighter of the two browns in guerlain's limited "terre indigo" palette, although i found the texture of "les sables" much nicer.


overall, this is an unexpected gem, the sort of thing that could be easily overlooked and that would be a crying shame, as they say.

here's a look at both products in action together. i'm not gonna lie to you, i really like this look for me, so if you have a similar complexion, i suggest you get thee to a guerlain counter forthwith. 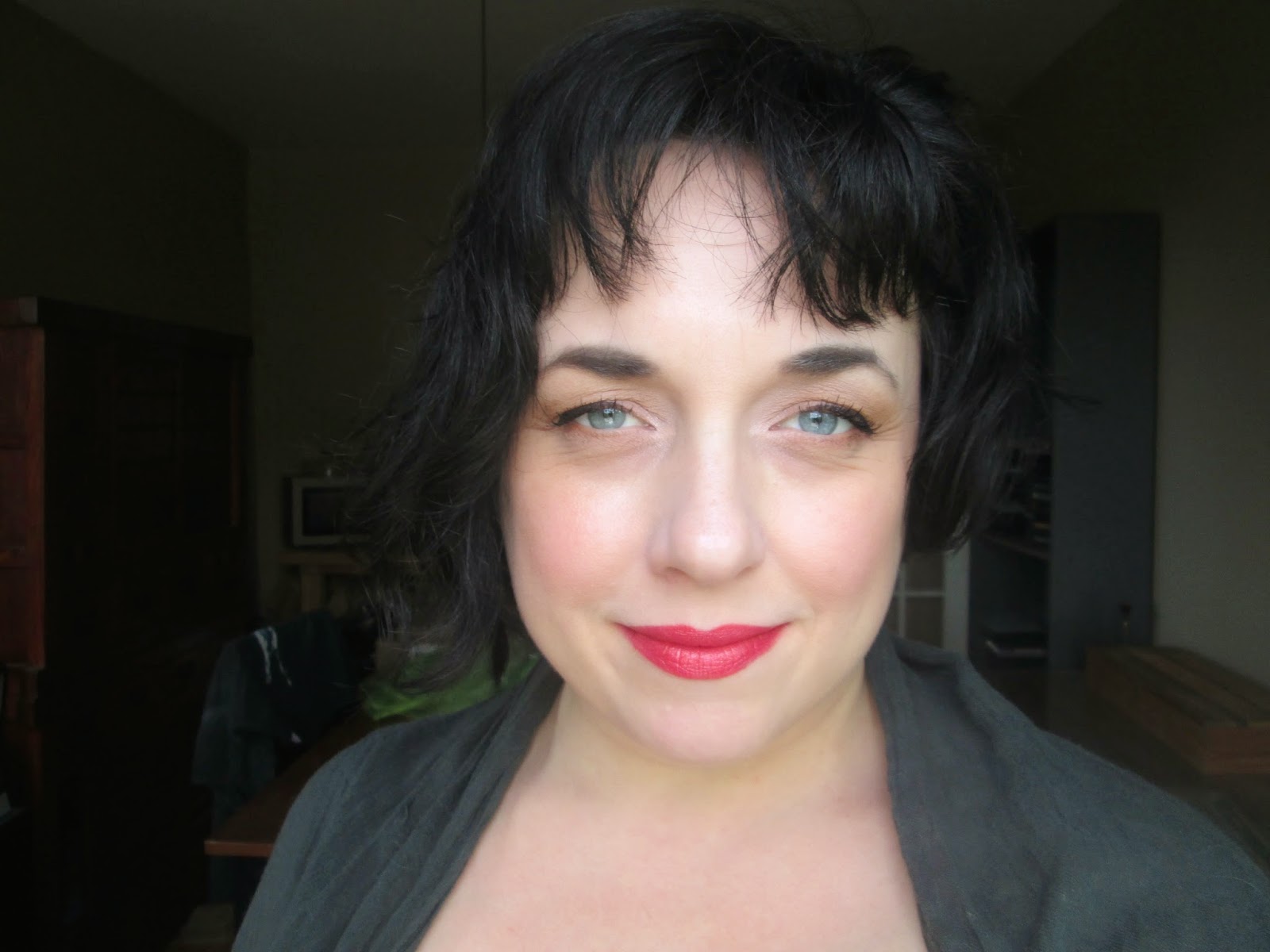 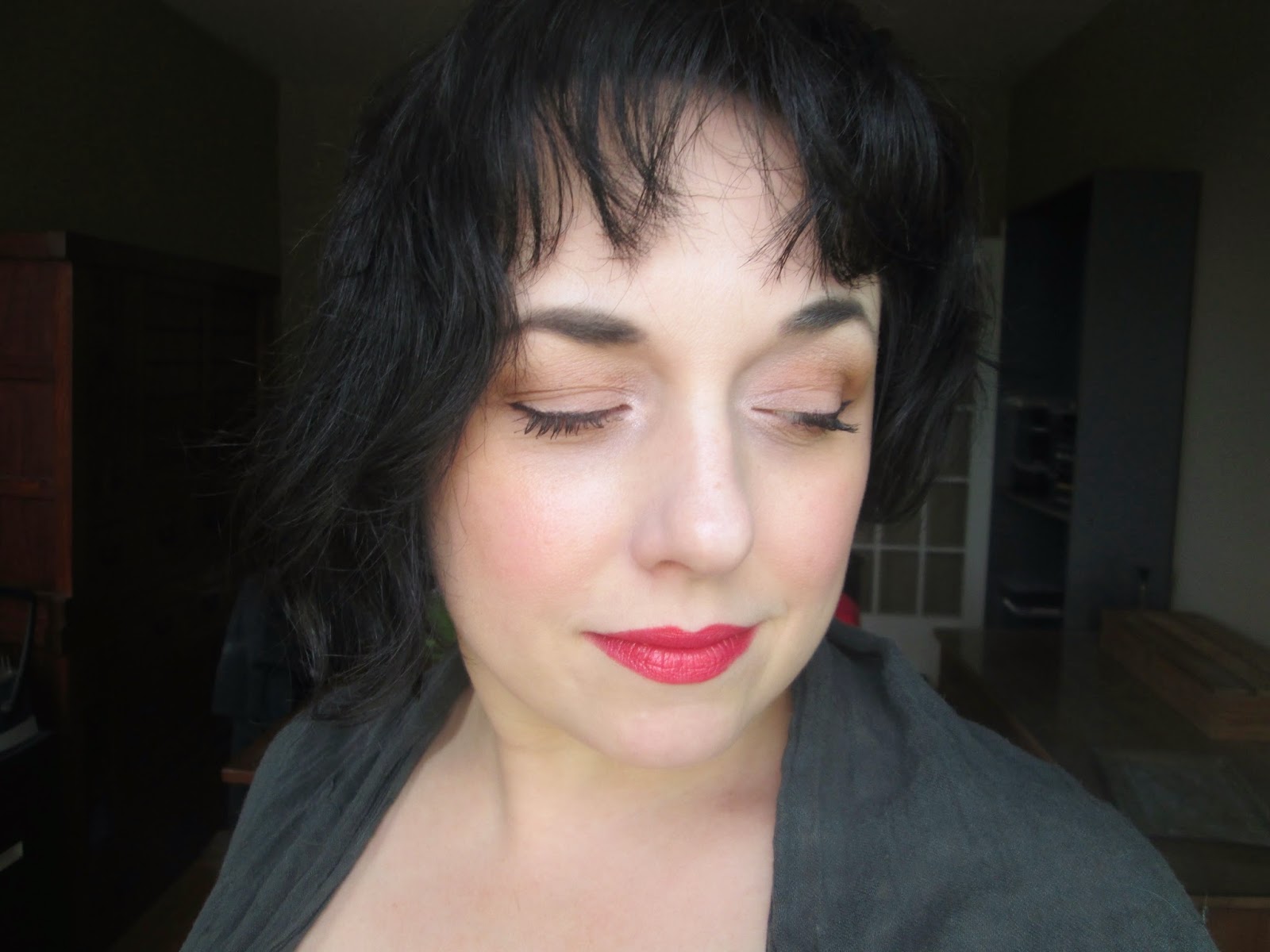 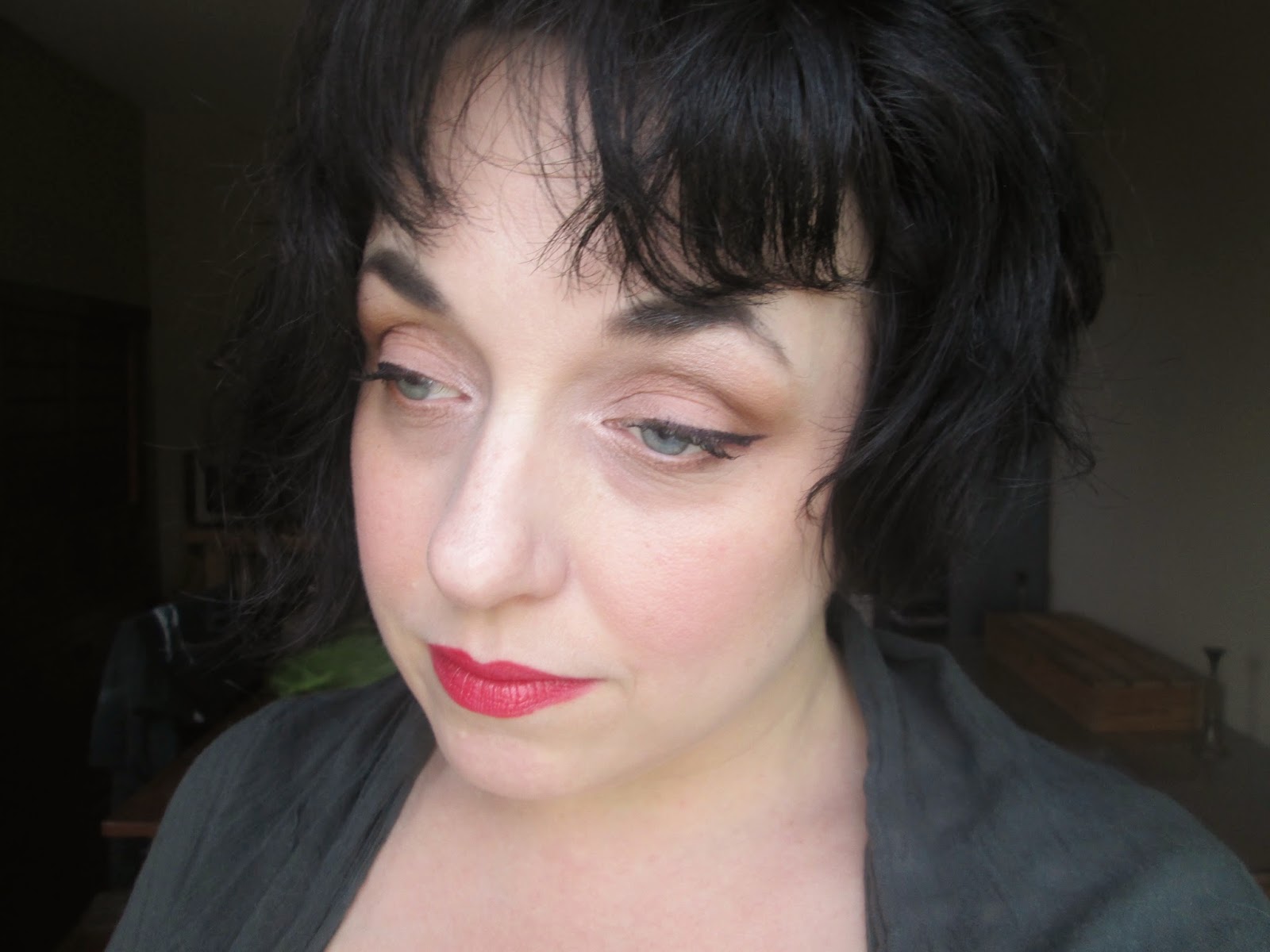 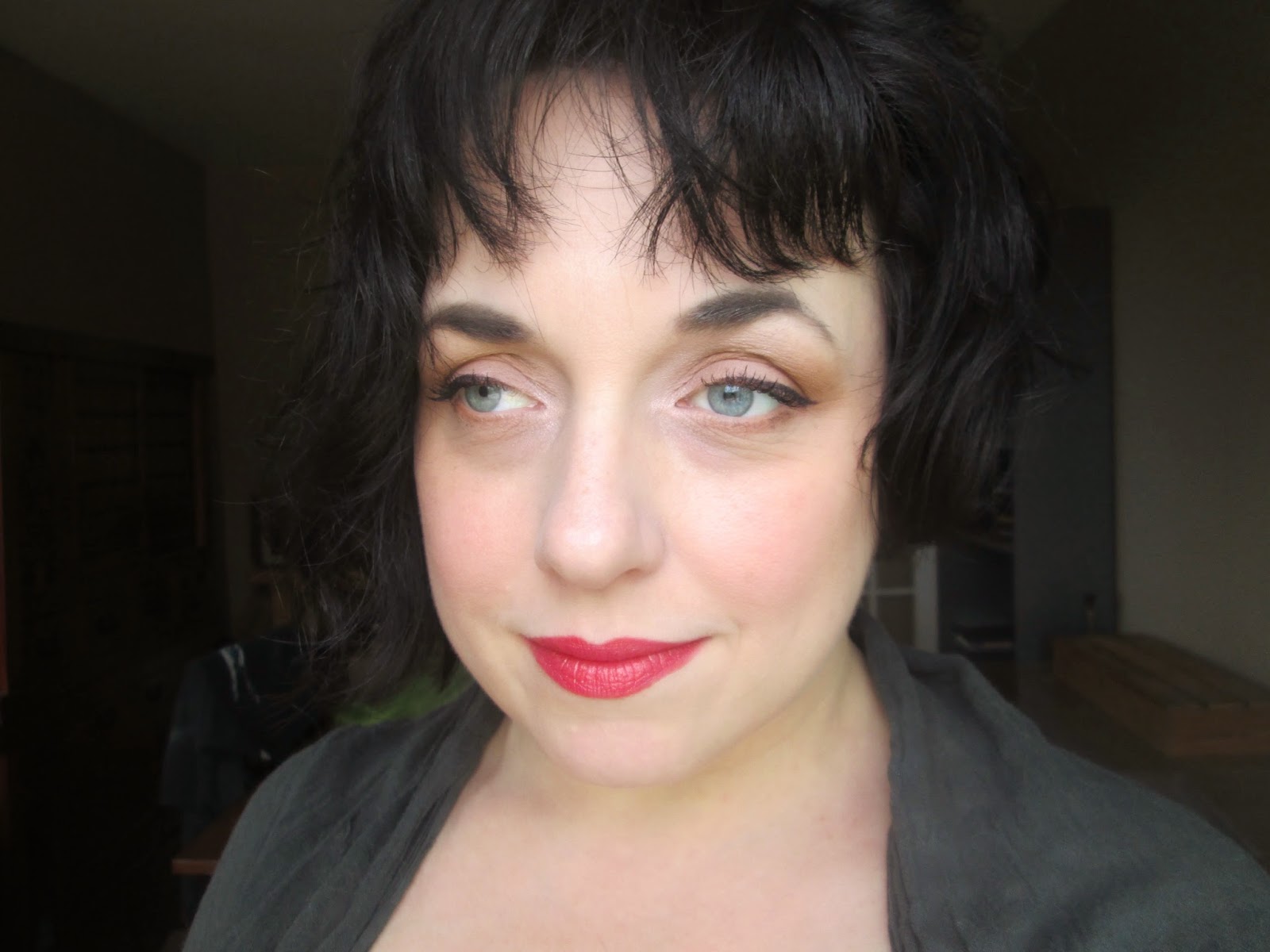 the cheeks ::
hourglass ambient lighting blush "luminous flush" [it's going to bug me if i don't say this: i'm not 100% sure it's luminous flush, but i'm at least 80% sure, which is still like a- sure. and most of the time, an a- is considered a good thing, right?]

these products are available right now, wherever guerlain is sold. if you'd like to see how "les sables" looks on a different [although still medium-light] complexion, you should check out sara's review at colo[u]r me loud.

oh guerlain, i don't know how you got the spy camera into my brain or how it works, but i'm kind of glad you chose me as your subject.

morelikespace said…
Thanks! I'm glad you enjoyed it. Believe me, I love doing the "research".
10:01 PM