September 23, 2014
a lot of my friends can't believe that i haven't just blocked ads from my facebook feed. personally, i can't imagine why anyone would block ads from their facebook feed, because they're such an endless source of inspiration. 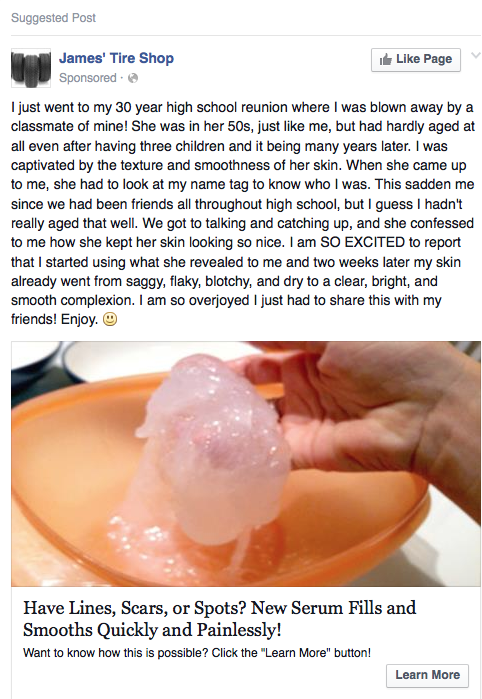 facebook, you need to fire yourselves now. stop attacking people who want their private lives private and just show yourselves a red card. someone in your organisation has placed ads for skin care from a company called james' tire shop.


because when i want good advice about my skin, i like to go to the autobody and ask guys who work with steel and solvents. i'm sure they all moonlight for mary kay.

since i was writing a blog post on the subject, i figured that i'd at least google the name to make sure that i wasn't about to find out it was some hipster outfit and i was just hopelessly behind the times. well, i am hopelessly behind the times, but that's beside the point here. this is what you get when you google "james tire shop". and incidentally, this is what you get when you search facebook for james tire shop.

in the hopes of finding the punchline to the joke, i read the ad and noticed the following:

so this was your thirtieth high school reunion and you and your classmate are both in your fifties. let's say you're both fifty-one, ok? that means that you graduated high school when you were twenty-one years old.

i'm going to assume that anyone who graduated high school before they were twenty-one has figured out the problem with this statement.

i could leave it there, but i can't turn down the opportunity to comment on the image that the advertiser has chosen to go with the text, because it looks like a microwaved jellyfish. you know what i think when i see something that reminds me of a microwaved jellyfish? "get that shit away from me, pronto."

and i don't think i'm alone in that. i think that there are a lot of people who would scroll past a few posts they were actually interested in looking at in order to get that nastiness off their screen. i'm willing to bet a lot of you are trying to avoid looking at that image right now.

i'm not going to claim to be omniscient when it comes to advertising, but there are a couple of tidbits i'd like to pass on:

1. a shocking image will catch people's attention, it's true.

2. catching people's attention by showing them gross images in advertising is like waving your junk at a cute girl and then asking her if she wants to go to dinner. you've made your first impression and you're going to have to live with it.

last night, i had a dream that i was building a marketing campaign for a client that involved kidnapping children for a couple of days, feeding them a healthy meal and then returning them home wearing a t-shirt for the brand i was representing. i can almost guarantee you that after the fourth or fifth kid turned up, people would be talking about the brand. the problem is that what they would be saying probably wouldn't boost sales.

when i woke up, i found all of this very funny. i also knew that it was one of the most batshit insane things my brain had ever come up with, which is why i'm not actually going to suggest it as a guerilla marketing tactic. sometimes the most important part of creativity is knowing when to stop: don't kidnap children as a public relations stunt, don't buy your skin care from a mechanic [no matter how good a mechanic s/he is] and don't buy ads for your company on facebook.