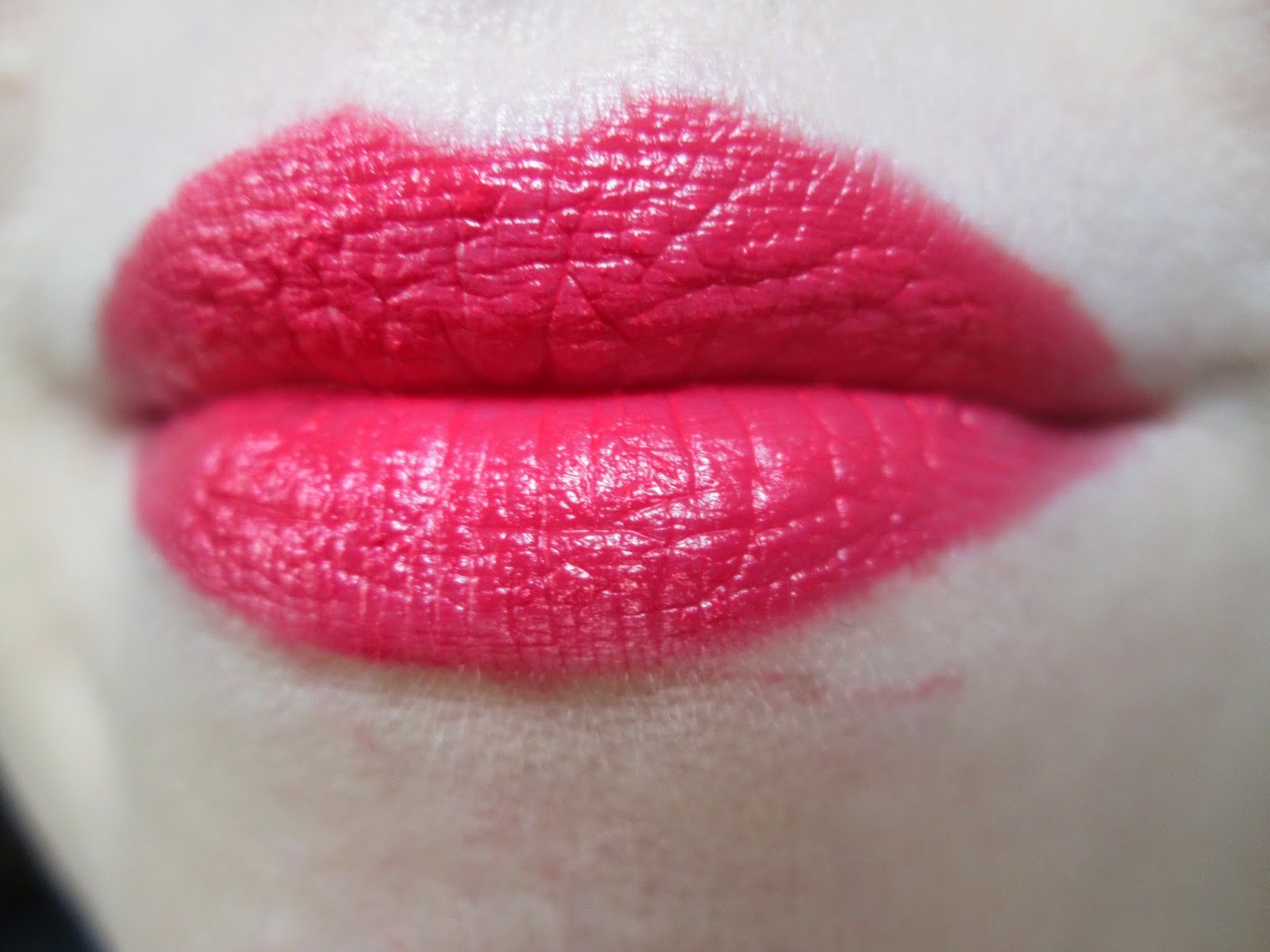 when baudelaire wrote of our "immortal appetite for beauty", he was actually making a comment about how humanity seeks to find something beautiful even in the darkest and most miserable times, in a rather desperate and probably naïve attempt to reassure themselves of the good in the world. but whenever i think of that quote, i am reminded only of my lipstick drawer, because never has an appetite for beauty been so immortal. seriously, at the rate i finish these, i'm going to be buried with a quite a lot of them. it'll make for a colourful cremation, though.

in particular, i want to assure all of you that i'm perfectly aware that if i never bought another red lipstick again, i would still have to sprout several extra heads in order to have any hope of running through my current stash. but i just can't help it. the pretty just overwhelms me. there are far worse things i could be doing and believe me, if i'm denied my lipstick outlet, i'd be doing them.

my "justification" for my latest purchase was that i had yet to try givenchy's le rouge formula, which was launched to rave reviews last year. and that like a whole year ago. i seriously don't think i've heard a single negative comment about the new lipsticks, other than some sad references to the fact that they are quite pricey. [they're actually around the same price as yves st. laurent rouge pur couture lipsticks, armani's rouge d'armani, all chanel lipsticks, guerlain's rouge automatique and the new rouge dior formula. they're cheaper than guerlain's rouge g or tom ford's lipsticks. so a lot depends on your perspective.]

the reason why i held myself back for this long was that a lot of the shades, while pretty enough, seemed kind of undistinguished to me. there seemed to be a lot of other shades like them [including ones from mac, nars and urban decay which are cheaper]. i'm not 100% certain that's true, but givenchy are available exclusively at sephora [both are owned by parent company lvmh] and the lighting around the givenchy display at my local sephora is terrible. it's really an ongoing problem at a lot of makeup counters, something i am finding ever more frustrating.

recently, however, givenchy released some new shades that looked a little more unique to my eye, enough so that i ordered them online, having only seen shots on beauty blogs. and so my first foray into le rouge [not, i should note, my first givenchy lipstick] became "rouge égerie", one more in a long line of reds to find its way into my home.

"rouge égerie" is a bright, let me repeat that bright coral-red. it is completely opaque in even a light single pass, making this indeed one of the smoothest and richest formulas i have encountered. despite its opacity, though, it doesn't feel heavy and i do think that the colour will lean a little warmer or cooler depending on your complexion. on me, it pulls very slightly warm, but there's still a definite pink undertone that keeps it from veering into tomato red territory.

this is the sort of shade that is created for bright season colouring. it's a fully saturated shade that's going to overwhelm more subtle colouring, without a hint of grey or brown, but slightly warmed with a hint of springtime yellow. if you wanted a more toned down look, you could blot the shade to a stain, but really, this is the sort of colour you buy because you want to make a bit of a statement, or because you like bold shades.

among my collection of reds and corals of various sorts, "rouge égerie" is different. it's actually quite difficult to find this sort of clear colour that's not muddled with just a bit of brown, unless they're very cool [blue] in undertone. it reminded me immediately of chanel rouge coco "cambon", which is cooler and more muted [i had never thought of "cambon" as in any way muted]. guerlain "garconne", probably the boldest, truest red out there right now, is deeper and cooler. mac "hibiscus", a limited edition shade that is overdue for a comeback, is sheerer, more muted and more orange.

as for the formula, i consider myself lucky that i feel like i already have matches for a lot of the shades because otherwise i'd be carting the whole lot of them home with me in bulk. i'm certain that more will be coming to keep this first one company, i'm just going to force myself to be cautious about my choices. "rouge égerie" is long-wearing and feels lovely. it's opaque and even, but it doesn't feel heavy. the hype is to be believed: there is nothing bad i can say about these lipsticks. my tentative reaction is that le rouge could compete with the rouge g and rouge d'armani as my all-time favourite formula.

i came up with a look to show you my new friend in action, but it's not really that much of a look at all. 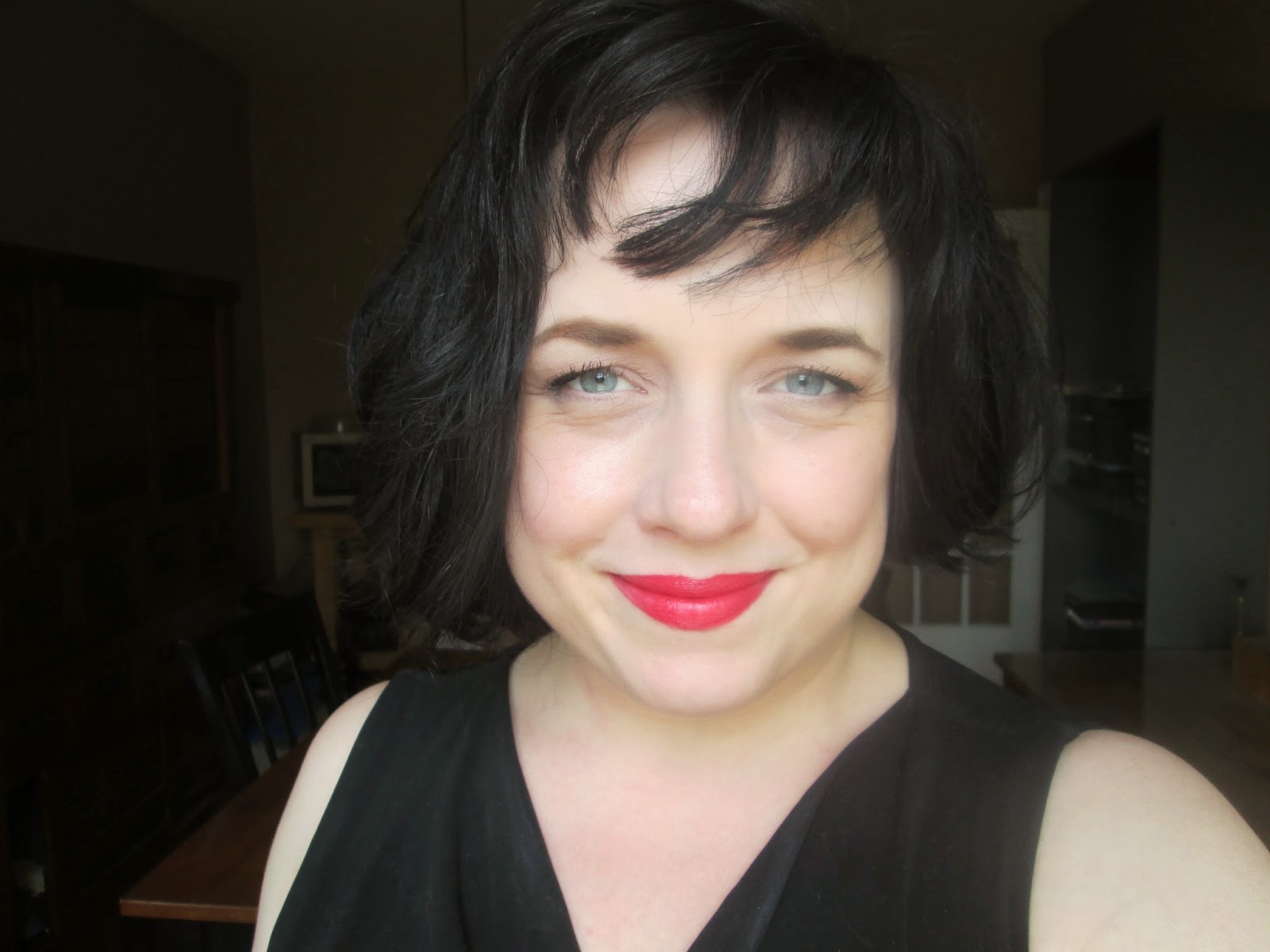 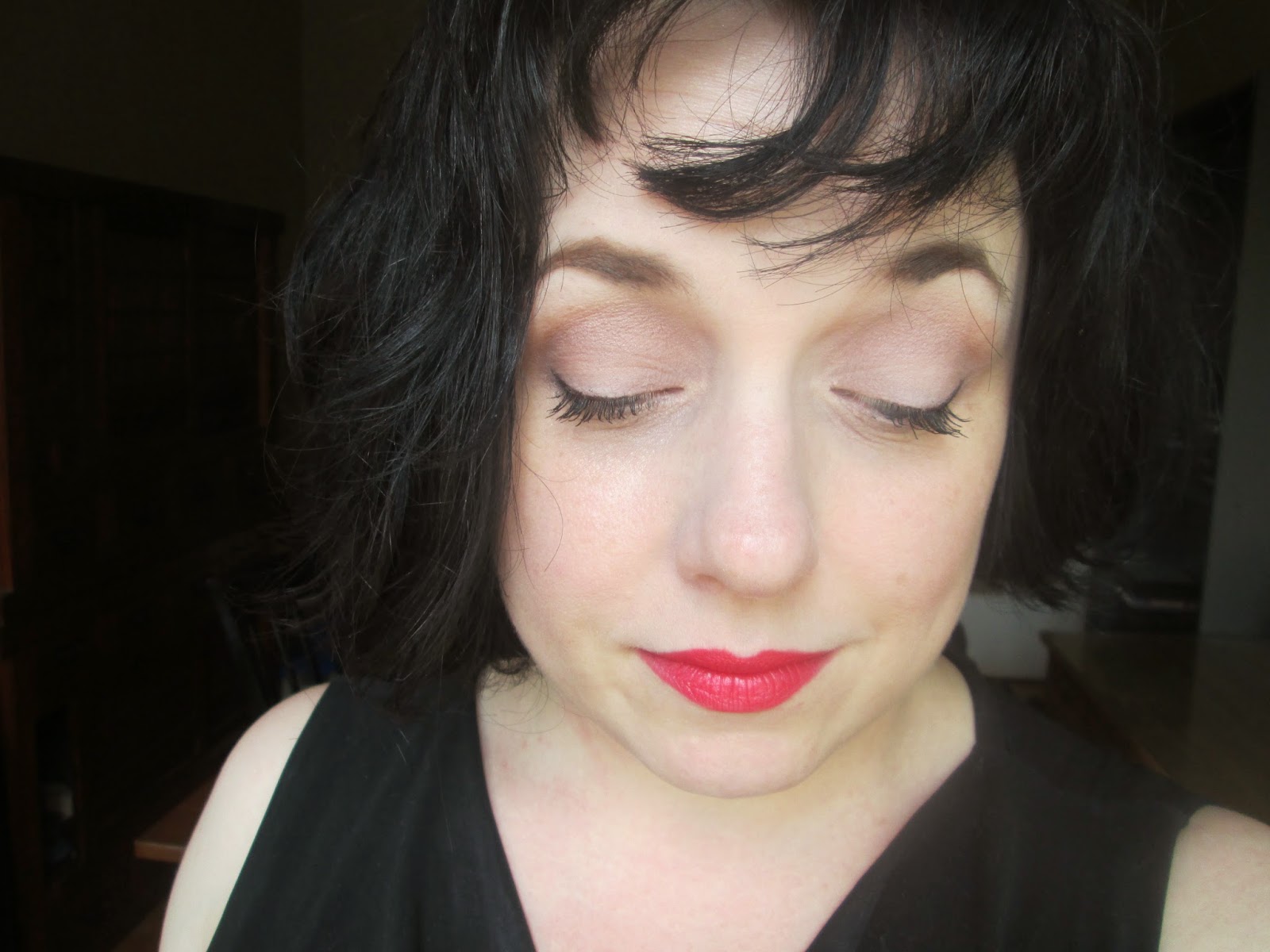 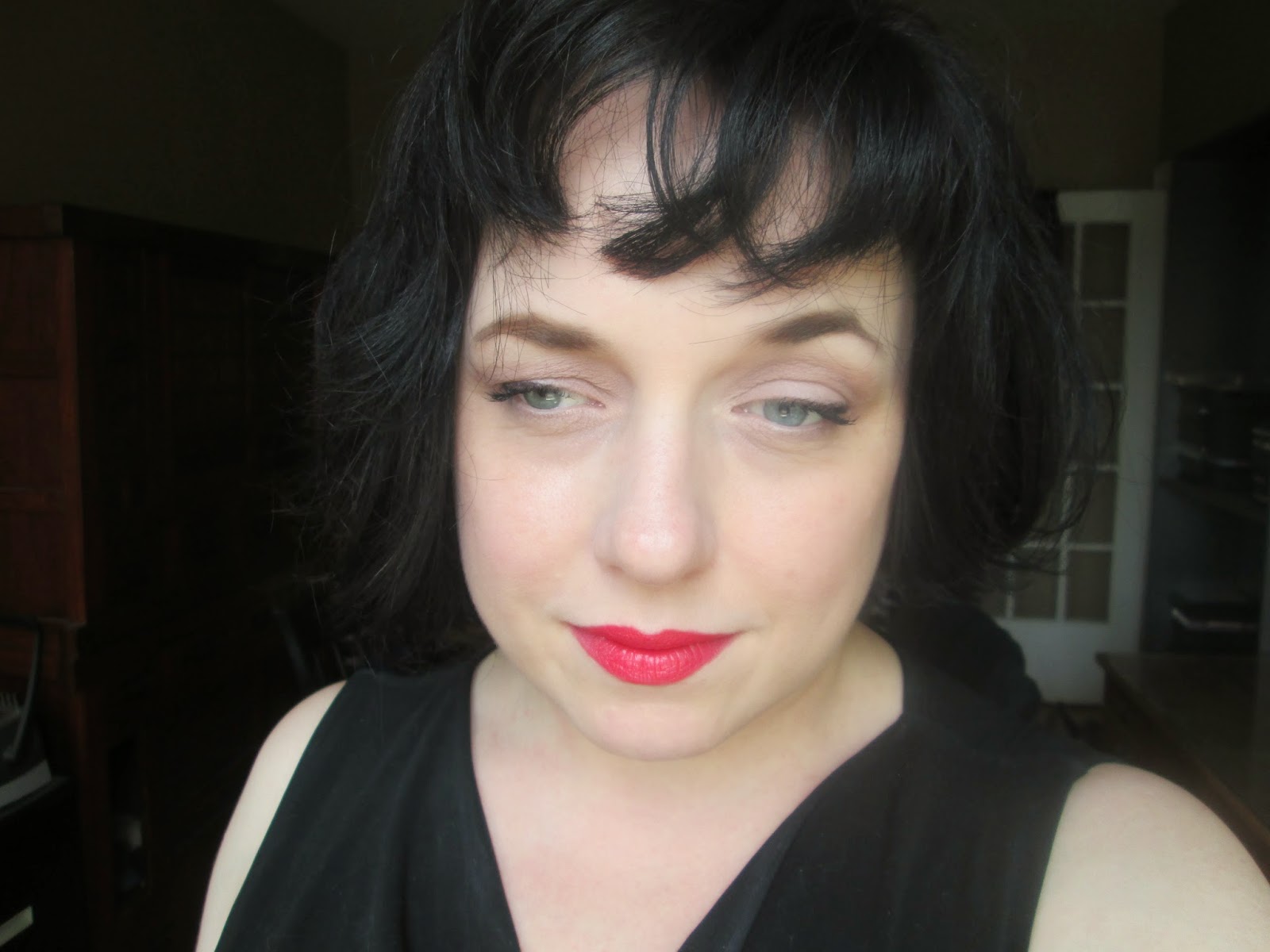 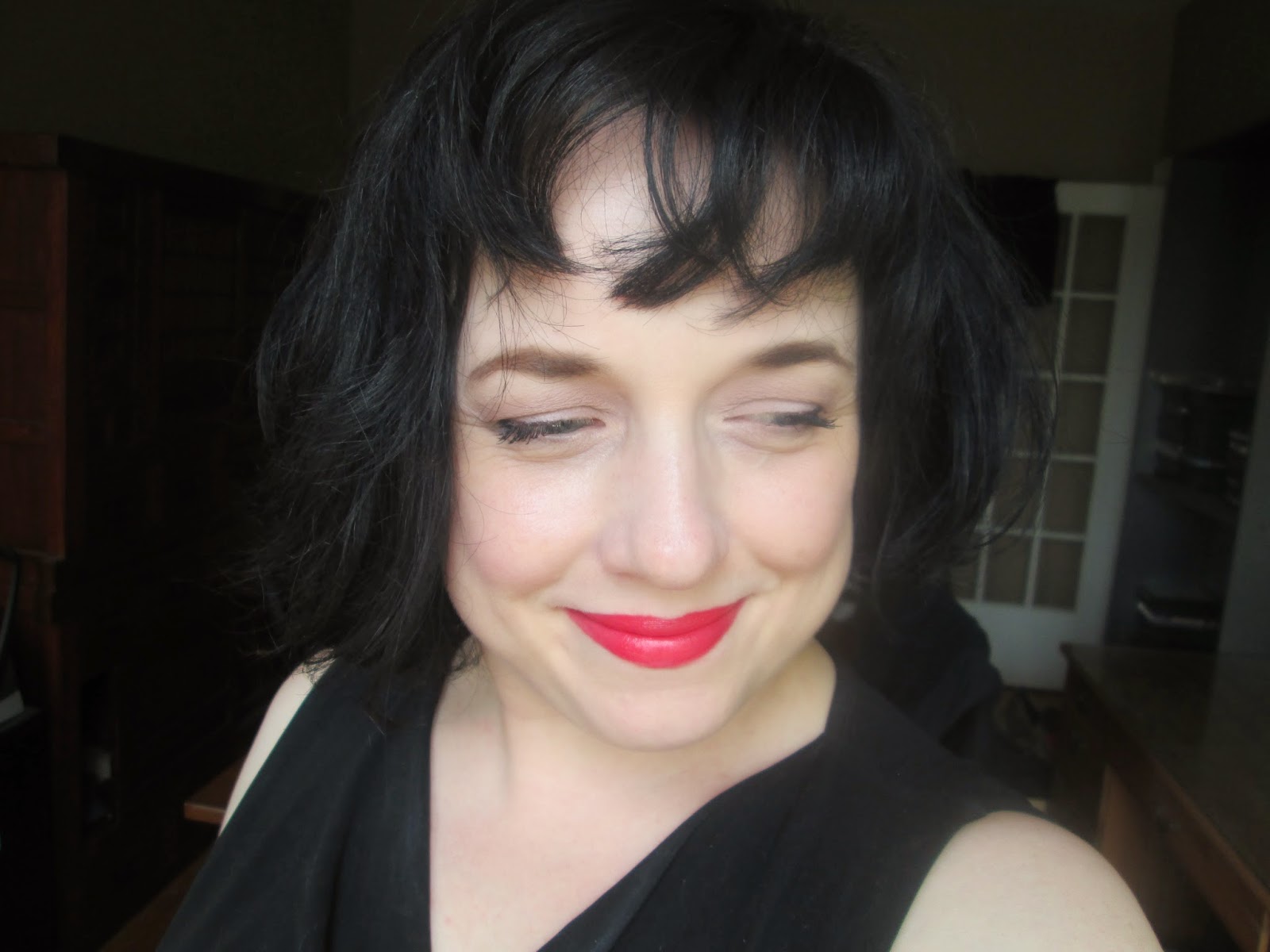 yup, this is just one of those colours that you want to let take the spotlight.

on my eyes, i'm wearing:

that's about as basic as colour can get. i forgot to note what blush i have on [again], but i know that i had on a dusting of hourglass ambient lighting powder in "diffused light".

and that just leaves the lips. i know i'll eventually get around to trying out more adventurous things, but my first instinct was that i wanted to appreciate the full glory that this shade had to offer. and honestly, if you never wore it any other way, it would still be a worthy purchase. this has really just whet my appetite even more.

L.P. said…
Yeah, I've been lusting after Grenat Initie for a bit now... it might just be my next lipstick purchase.
6:26 PM

morelikespace said…
That one was certainly on my radar. I'm trying to enforce a "no more deep reds" rule on myself. Thus far, I've been successful, however I think that might be because Fall collections haven't arrived. So I've been sort of like a pyromaniac saying she won't set fires outside during flood season.
1:53 PM

morelikespace said…
Thank you for your enabling. I can personally tell the difference between ALL my deep reds, although apparently no one else can...
11:33 AM