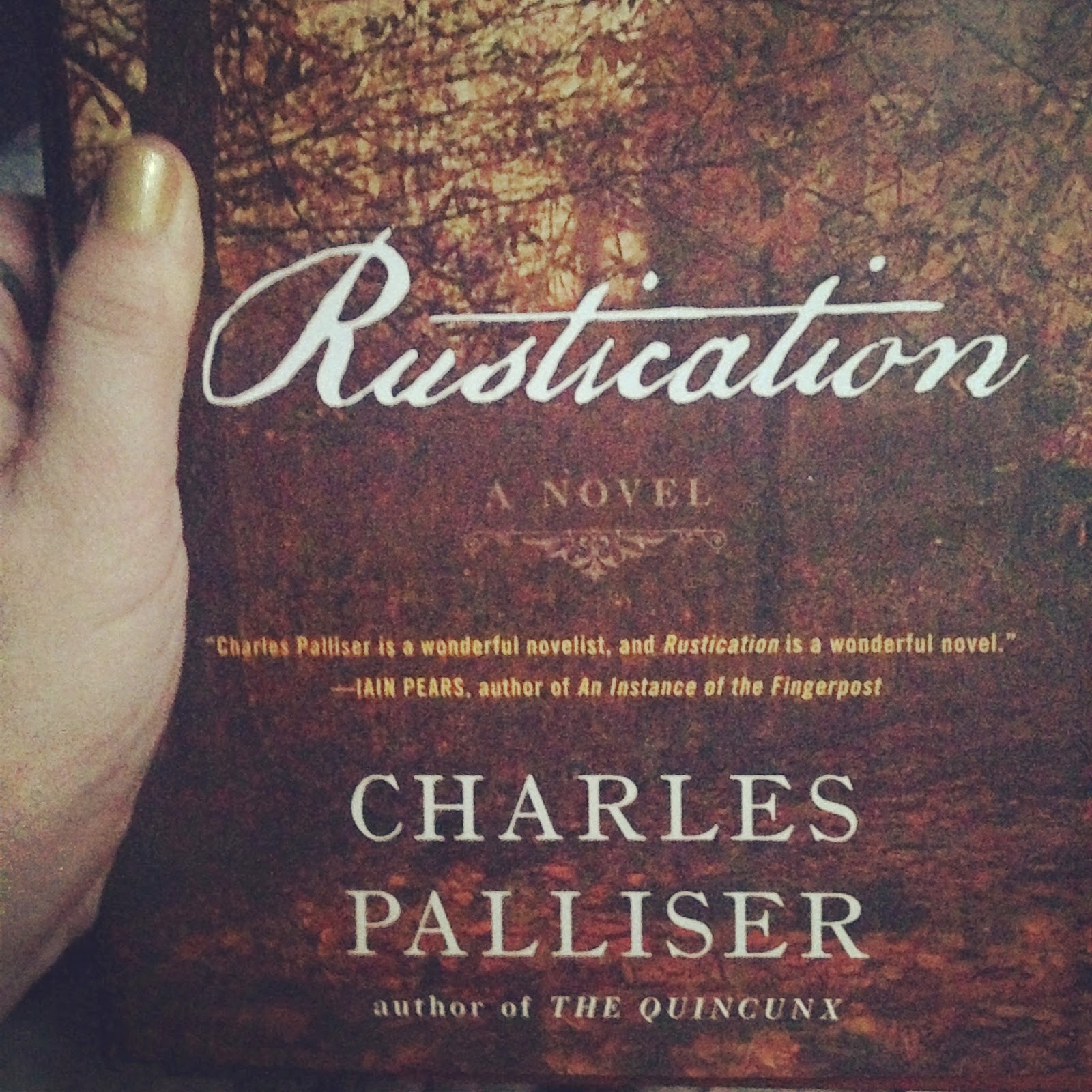 years ago, a friend got me to read the quincunx by charles palliser, a wilkie collins- or charles dickens-esque tale of tangled family history, class and inheritance set in nineteenth century london. i've always been grateful for the recommendation, as it's remained one of my favourite books and one to which i've returned many times over the years. as a novel, it's quite an accomplishment, not just because of its compelling plot [i stayed up until five in the morning on more than one occasion], but because it was so fantastically detailed in its construction. some of the literary devices palliser employs seem almost amateurishly obvious, but repeated readings show much more complex truths hidden behind the main story. it's those subtleties which have made it one of my longtime favourites.

since i fell under the spell of the quincunx, i've read three of palliser's subsequent novels- betrayals, the unburied and now rustication. while none match the singular excitement of the quincunx, there is no doubt that they are entertaining reads. betrayals stands alone as a series of interlinked short stories with different settings and different narrative voices. the unburied and rustication return to the  world of nineteenth century england and, in fact, both are set in and around the fictional southeastern town of thurminster, england. both are single story mysteries, like the quincunx and both are deliciously gothic in atmosphere.

it took me about twenty-four hours to read rustication, which should give you an idea of how compelling it is, but also reveals that it's a fairly straightforward piece. palliser's genius is normally that every single phrase, every detail is important and that, as much as he might lay everything out for the reader, there are still "easter eggs" for them to find. it gives a great sense of accomplishment when you're able to do this, which makes reading his works all the more enjoyable. you have to approach the text with the understanding that nothing is accidental.

that said, i felt like rustication was a bit of a letdown compared to his other books. too much of it seemed too easy, not demanding enough and the explanation of events [when the narrator has finally figured them out] is too comprehensive. i felt like there wasn't enough required of me. that's not to say that it isn't a good story, it is, but therein lies another problem: it's far too similar to the unburied, it just isn't as engaging. i felt like there was a lot of time wasted in the narrator's repetitive sexual fantasies about virtually every woman here encounters that might have been better spent in other ways.

the narrator is a young man, no longer a child but still well short of being an adult, who is sent home from university ["rusticated"] after a scandal involving the death of a friend. his oddly cold reception by his family and the creepy insularity of the small town where they have come to live after the death of his father are the springboards for a violent mystery in which the narrator is implicated. the story of how he came to be rusticated unfolds parallel to the plot and provides a sort of explanation for the narrator's occasionally frustrating naivete; he believes that the apparently simple people around him are incapable of the sort of darkness that he carries with him.

of course, that's not true. the people he encounters are machiavellian and vicious almost without exception- it's a challenge of reading palliser that the majority of his characters are generally unlikeable, while those who are at least not objectionable are often irritatingly obtuse. this is where his genius for plotting comes into play: it will keep you reading even if you can't generate any sympathy for the characters involved.

the problem here is that, unlike any of his other books, some of the plot elements seem rushed. [this is one of those areas where i felt the author could have done more work, rather than spending time on the narrator's sexual longings.] it's not quite clear why the narrator is so determined to unlock all the secrets of the town or in solving the central mystery, especially when it's so abundantly clear that stirring the waters is making him a target. it seems like he has enough to worry about on his own.

as i mentioned before, the other weakness of the book is that it just doesn't have enough meat on its bones to be worthy of the master plotter. i'll give it a caveat that i feel like i need to read it again, because there are some elements which i can't quite balance with the explanation of the mystery. palliser is not one to raise red herrings, so if something doesn't jive with the apparent resolution, i'm giving him the benefit of the doubt and assuming that there's something i've missed.

criticisms aside, i wouldn't have thrown myself into a book with such force if there weren't something to get out of it. the setting of the isolated town in the marshy gloom is expertly rendered and the horror that hangs over the place is as thrilling as anything in the story. likewise, the reliability of the narrator [and therefore his interpretation of events] is always a question, one which is hangs over the story's resolution, however neat and comprehensive his understanding [belatedly] seems. the pacing, although jerky at times, is enough to keep you reading and wanting to know more.

some readers will likely be put off by the violence and sexual content, neither of which are entirely new for palliser, but which he's never rendered so graphically. these elements definitely interrupt the notion of a victorian-era tale, being conspicuously modern inclusions. both elements do serve to emphasise the hypocritical chasm between what is spoken and what is thought, but at the same time, it seems that some of the characters are unrealistically blunt in their descriptions of these elements. this uncharacteristic openness has a tendency to pull one out of the setting- something i've never experienced with any other palliser novel; one of his greatest strengths is that he so meticulously recreates the historical world that even when elements not typical of period writing appear, it doesn't shake the reader's confidence in the setting.

so, as you've probably guessed, i was a little disappointed. i enjoyed reading the book, but i didn't feel that thrill when it ended that i've gotten from all of his other novels. whereas those are full meals [in the case of the quincunx a particularly large one], rustication is more like a meringue: sweet and easy but ultimately not satisfying. it's the sort of book i'd recommend taking on vacation [assuming that you don't mind reading something a little horrifying on vacation], when you aren't looking for too much intellectual stimulation, just a little thrill. it's certainly enough to function in that capacity.

I've been thinking about picking up The Quincunx forever, though! It's been a long time since I've gotten really absorbed in a novel. The last was Jonathan Strange and Mr Norrell, last summer; grad school in English sort of ruins you for pleasure reading. I think I'm going to give Palliser a try!
12:42 PM

morelikespace said…
The Quincunx is a great respite from English degree reading, in that it's not tremendously deep, but has enough going for it that it won't seem too lightweight for someone used to headier stuff.
Completely agree with you about Philip Roth as well. His appeal has always been a Palliser-worthy mystery to me.
6:28 PM