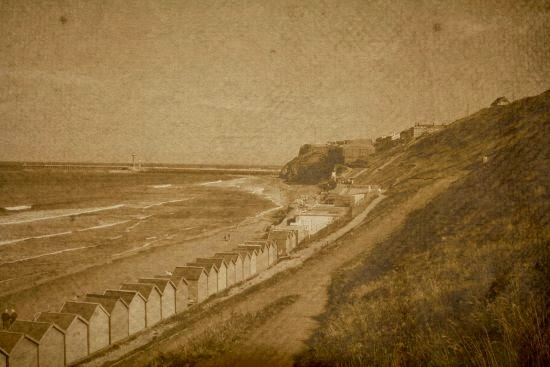 because it's a season associated with bright colours- the sun, the ocean [which we can finally approach without wanting to die], the trees, the grass and of course the canopy of flowers that decorate houses, parks and everything else, summer tends to be associated with bright colours. personally, that's a glorious thing for me, because i like fully saturated colour, especially when it comes to makeup [and even more especially when it comes to lipsticks].

but in the last week[ish] i thought, just to be perverse, i'd pull out some neutrals, really aggressively neutral neutrals, just to make sure i didn't fall into the seasonal trap. also, i kind of worry that some of my softer-toned lipsticks start to feel like i don't love them very much at this time of year and i don't ever want to be the sort of makeup mom who leaves her babies starved for attention. i'm not that woman.

so i thought throw together a quick post on some of my favourite "quiet summer" looks.

i should mention that i do wear soft-spoken colours fairly often, especially on the eyes, it's just that it's comparatively rare that i wear a complete look of them. since i now work from home, there's not a lot of reason for me to have to worry if the boss or my coworkers will be shocked by my choice of fuchsia lipstick or lime green shadow. [for that matter, i don't have to worry about shocking anyone by walking around the house in a tank top and underpants all day singing depeche mode at the top of my lungs, but i'm the sort of person who like to feel presentable even when i'm not presenting. most of the time. you probably shouldn't drop by unannounced.]

you can look after the break though... i'm decent, i swear

first up, a look that's not exactly a no-makeup look [anyone would be able to tell i had makeup on, surely], but is still pretty soft. the eyes are done with my favourite mac eyeshadow quad of all time, one that i made up myself. i had wanted to choose some workhorse shades, but i didn't realise until i started playing with them how well they went together. 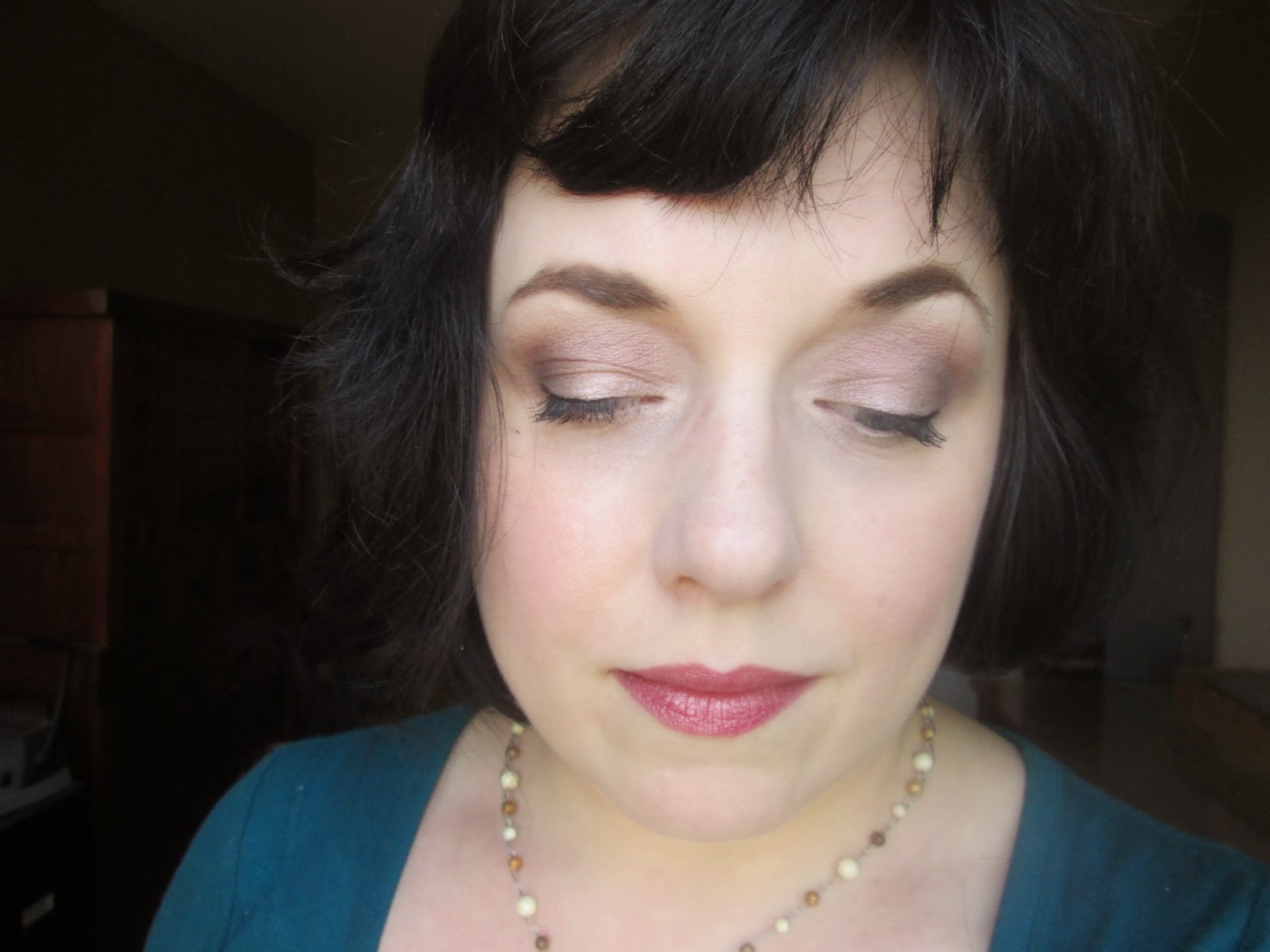 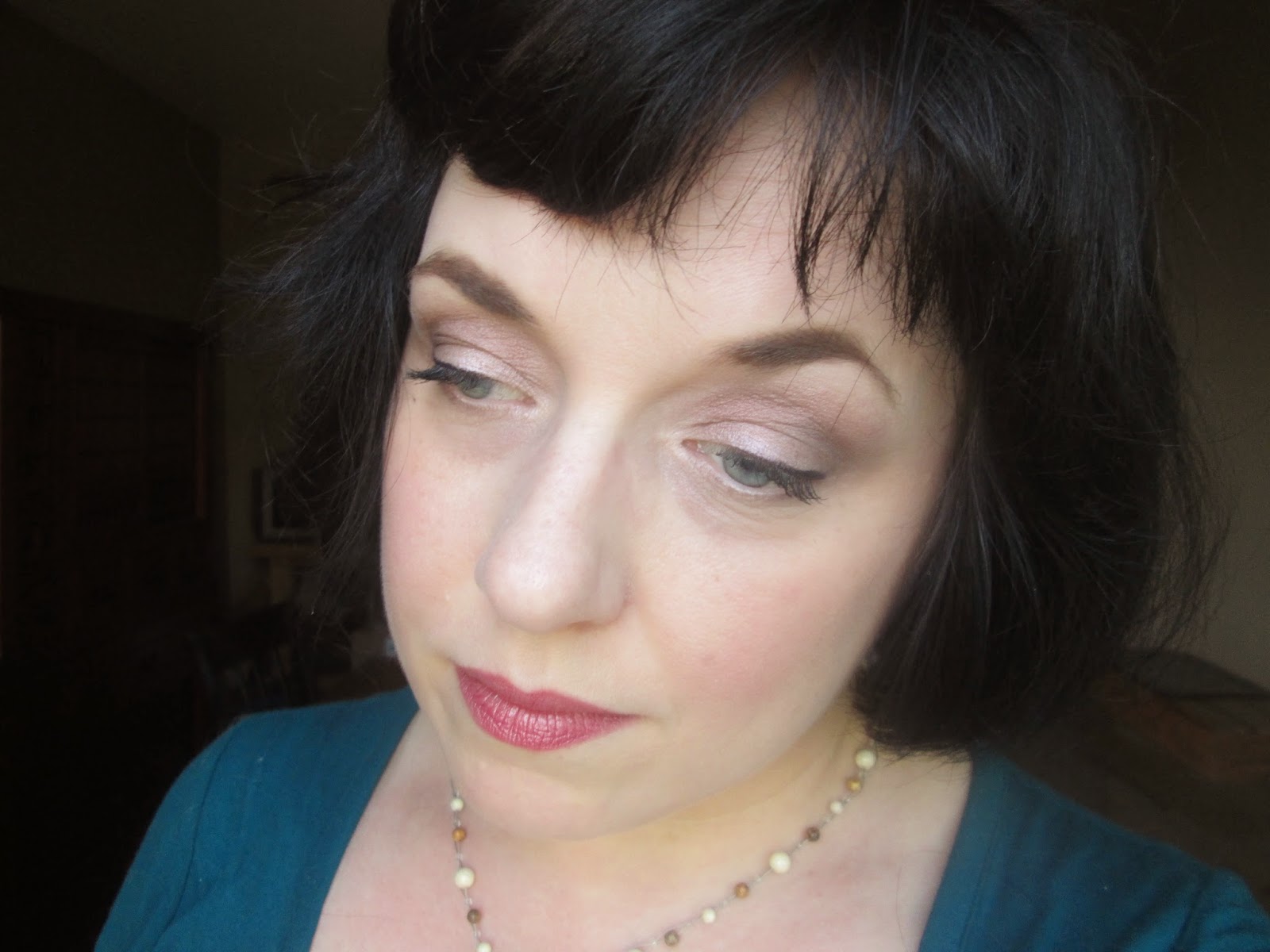 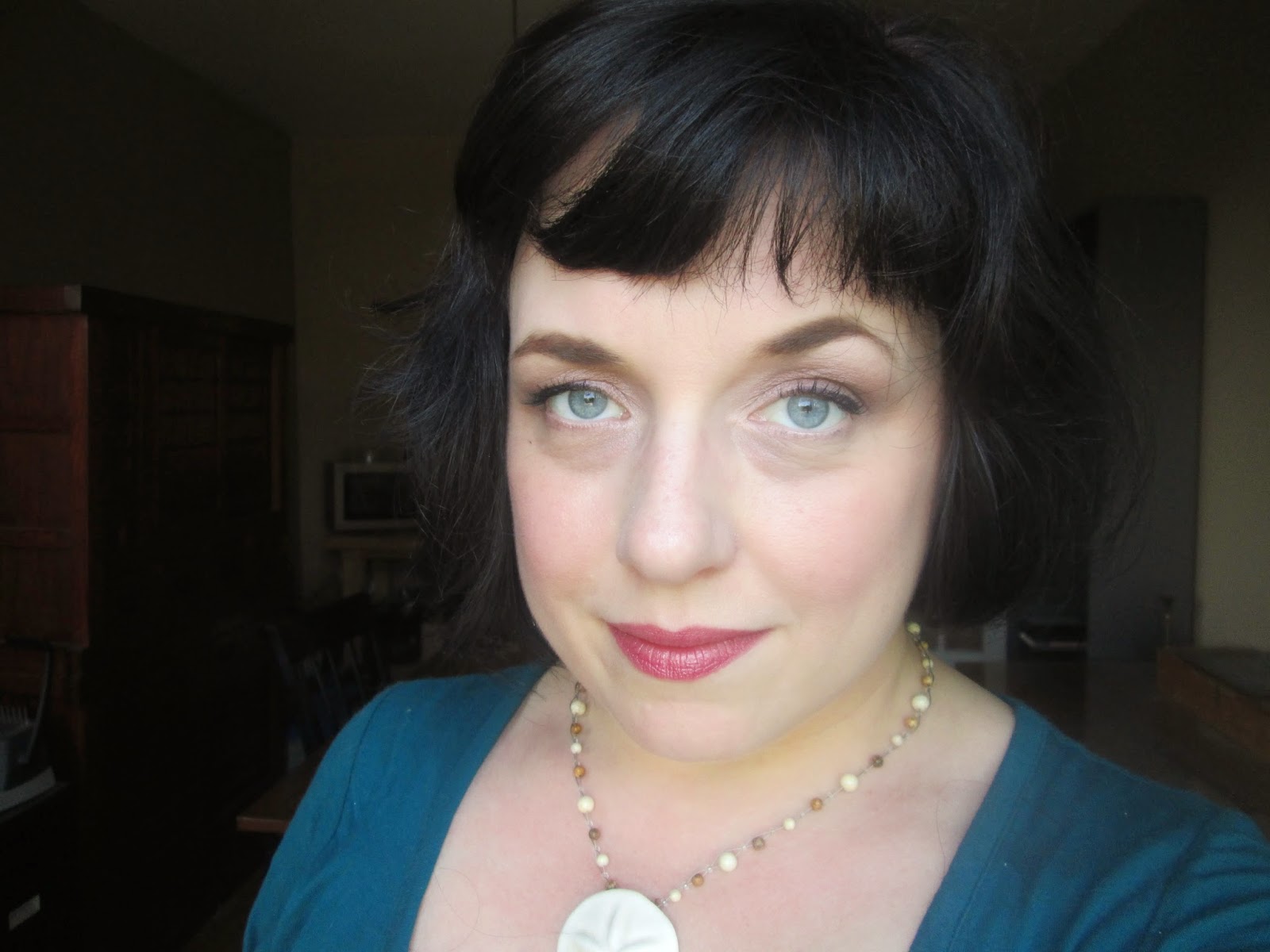 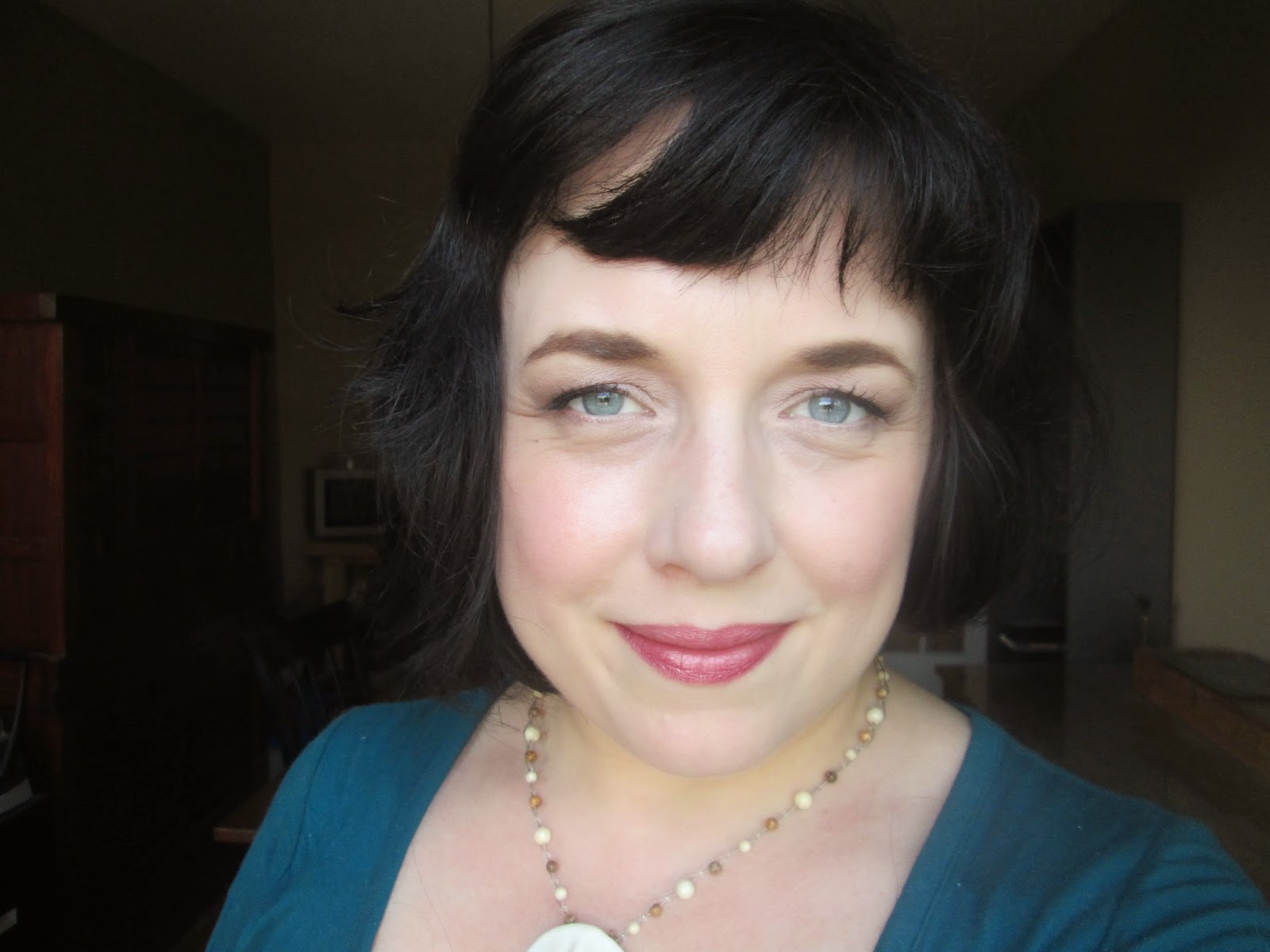 the four shades are:

dazzlelight: a neutral shimmery ivory, which i've used here along the brow bone and on the inner half of the lids. for my tastes, this is the best highlight shade in mac's permanent range. i like my highlight to have a bit of s sheen, but not a high frost. this one is perfect.

patina: it's a slightly greyed yellow-brown with soft golden sheen. it's along the same lines as burberry "pale barley", but lighter and a little cooler. in use, it reminds me a little of rouge bunny rouge "gracious arasari", not because they look alike [they really don't], but because both have a tendency to look almost invisible as you're applying, but still seem to have a pronounced effect. i've used it here on the outer half of my lids.

sable: a rich plummy brown with gold iridescence. it has enough red to it that i'd almost call it russet, but not quite. i've used it here in the crease, but with a fairly large, fluffy crease brush, so that it's diffused almost up to the brow bone.

satin taupe: certainly one of mac's best-known colours, it absolutely lives up to the hype. it's quite warm for a taupe shade, but has a silver-grey sheen that tamps that down a bit. i used in in the outer "v" of the eyes- about the outside third of the crease and to the outer corner of the eye.

i wanted a very soft, blended look that gave some shading, but not any sharp transitions and that's really the beauty of the "kate special" shadow quad. [fyi, these are also a great complement to either a bold or dark lip too.] i used a thin line of gosh's brown marker-style eye liner and what i think is the last of my ysl effect faux cils mascara. need to replace that, pronto.

on the cheeks is nars "torrid". it's a bright, warm peach-apricot kind of shade that turns a very warm pink on my skin. it's one of my staple summer products, because it's bright without being distracting and warm without looking dirty [the way almost all bronzers do on me]. i also dusted hourglass "diffused light" on the high part of my cheeks, as well as my forehead and chin.

the lipstick is my beloved rouge d'armani 605, a cool plummy pink with fine silver-white shimmer. the colour is close to my natural lip colour, just a touch darker, although of course my natural lips don't shimmer. i'm nervous that it's been a very long time since i've seen this shade at an armani counter. it's even been removed from the armani web site, which basically means that i'll never be able to repurchase this one. so i guess that one argument in favour of me wearing all the brightest lipsticks i can find is that it'll stop me from using this one up...

for the second look, i'm using a combination of eye shadows that might sound familiar to regular readers of this blog. that's because i did another look with the exact same shadows. this is a pretty different look, though. or as different as you can get with the same colours. 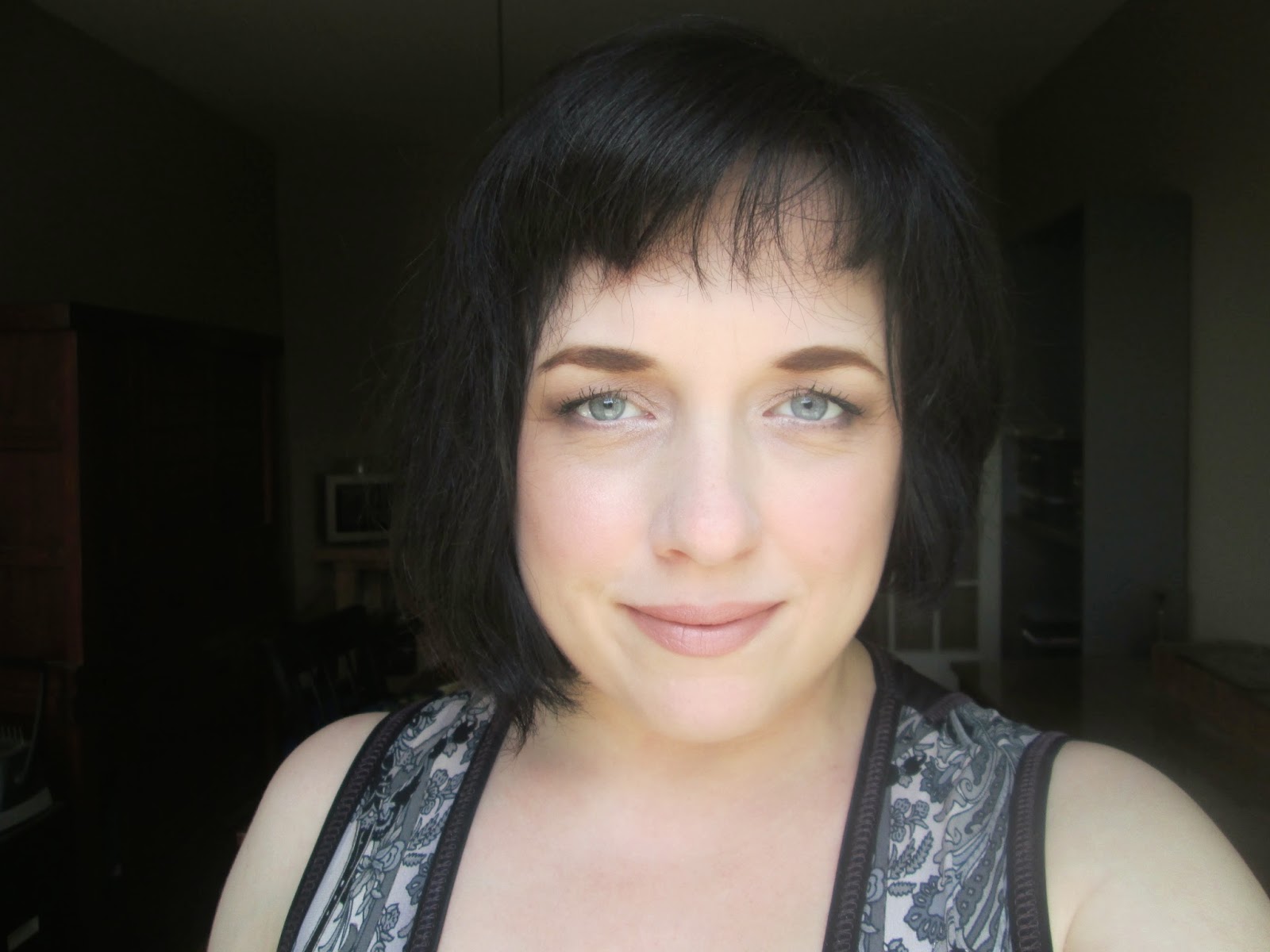 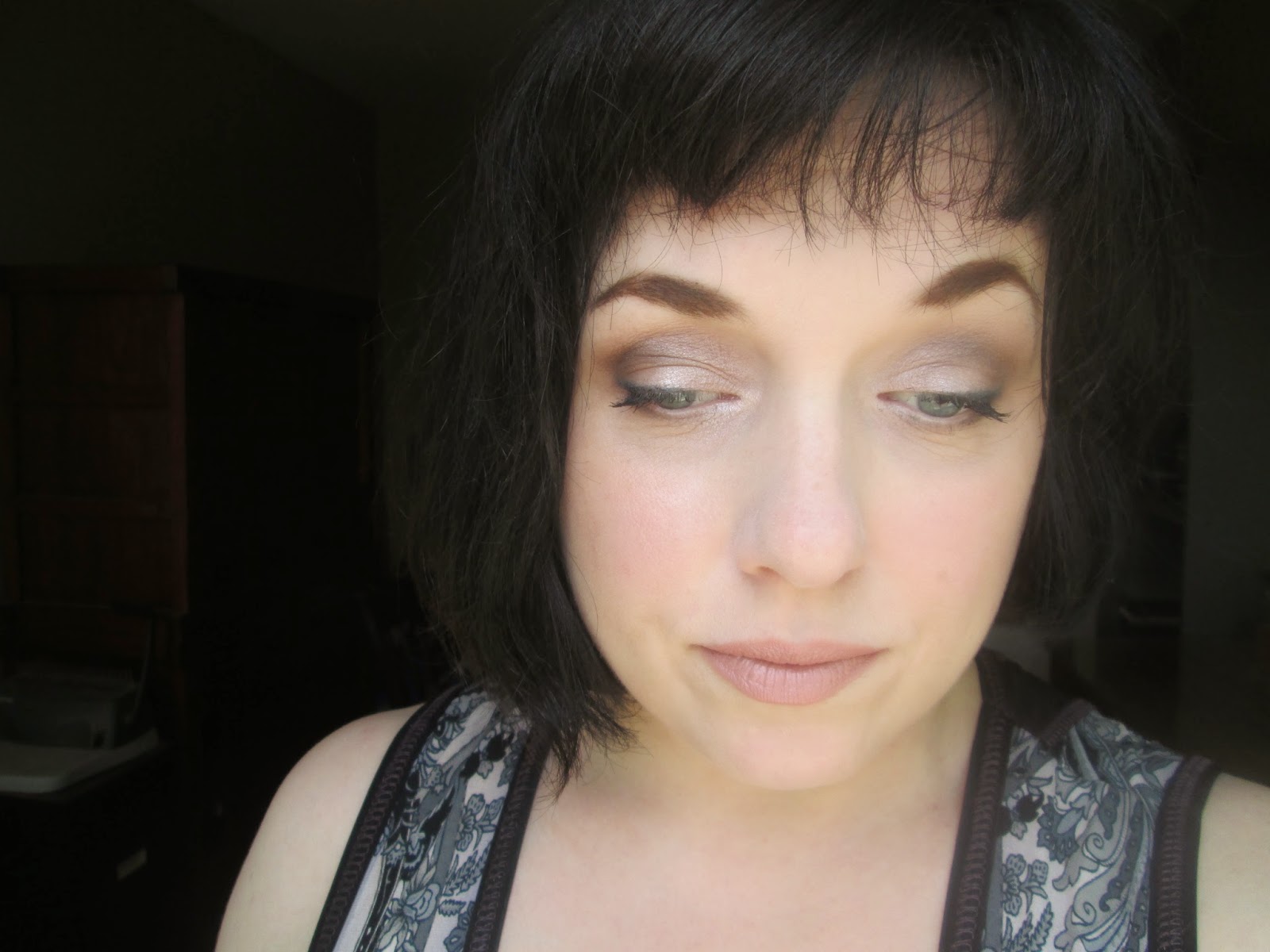 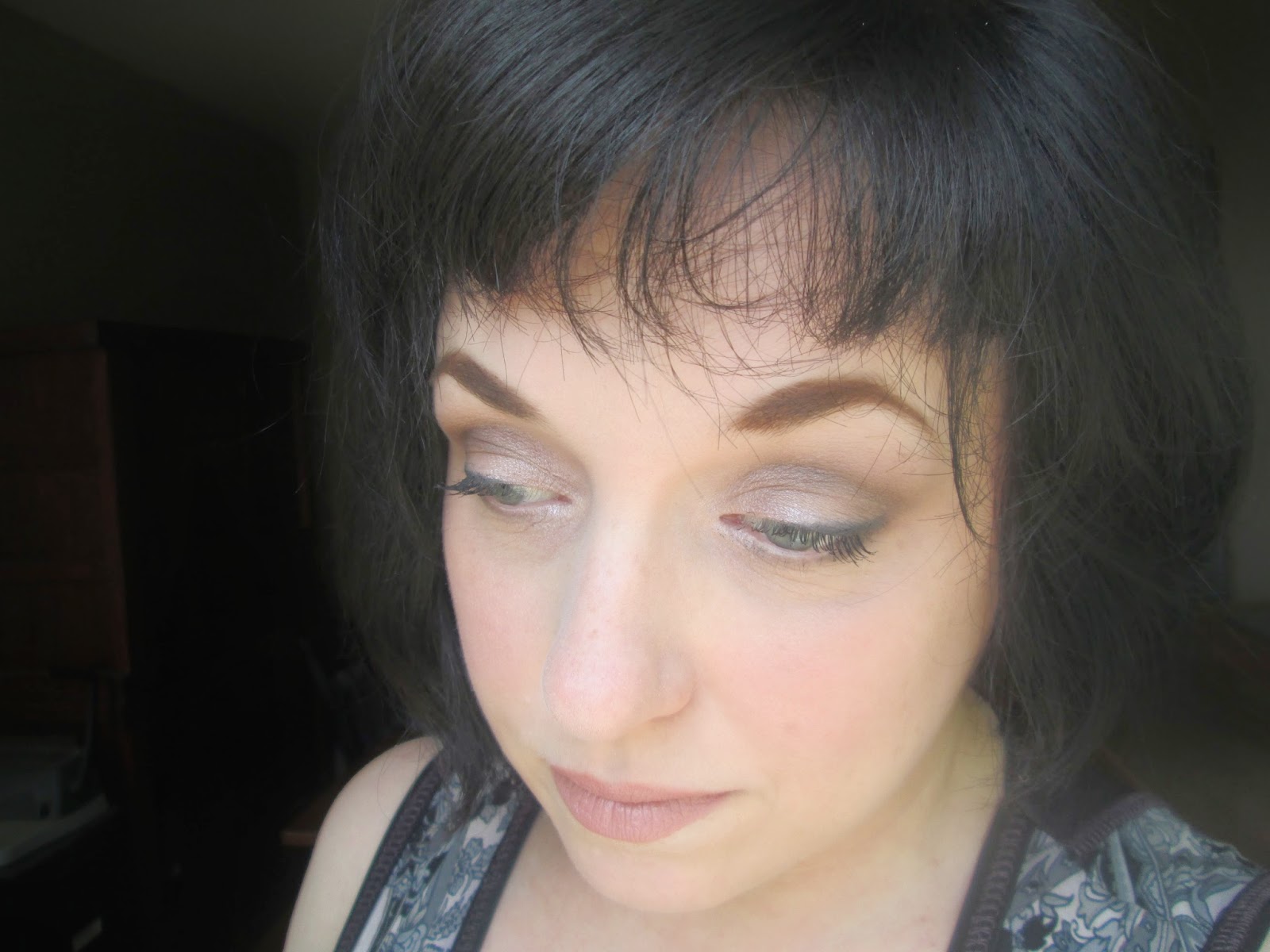 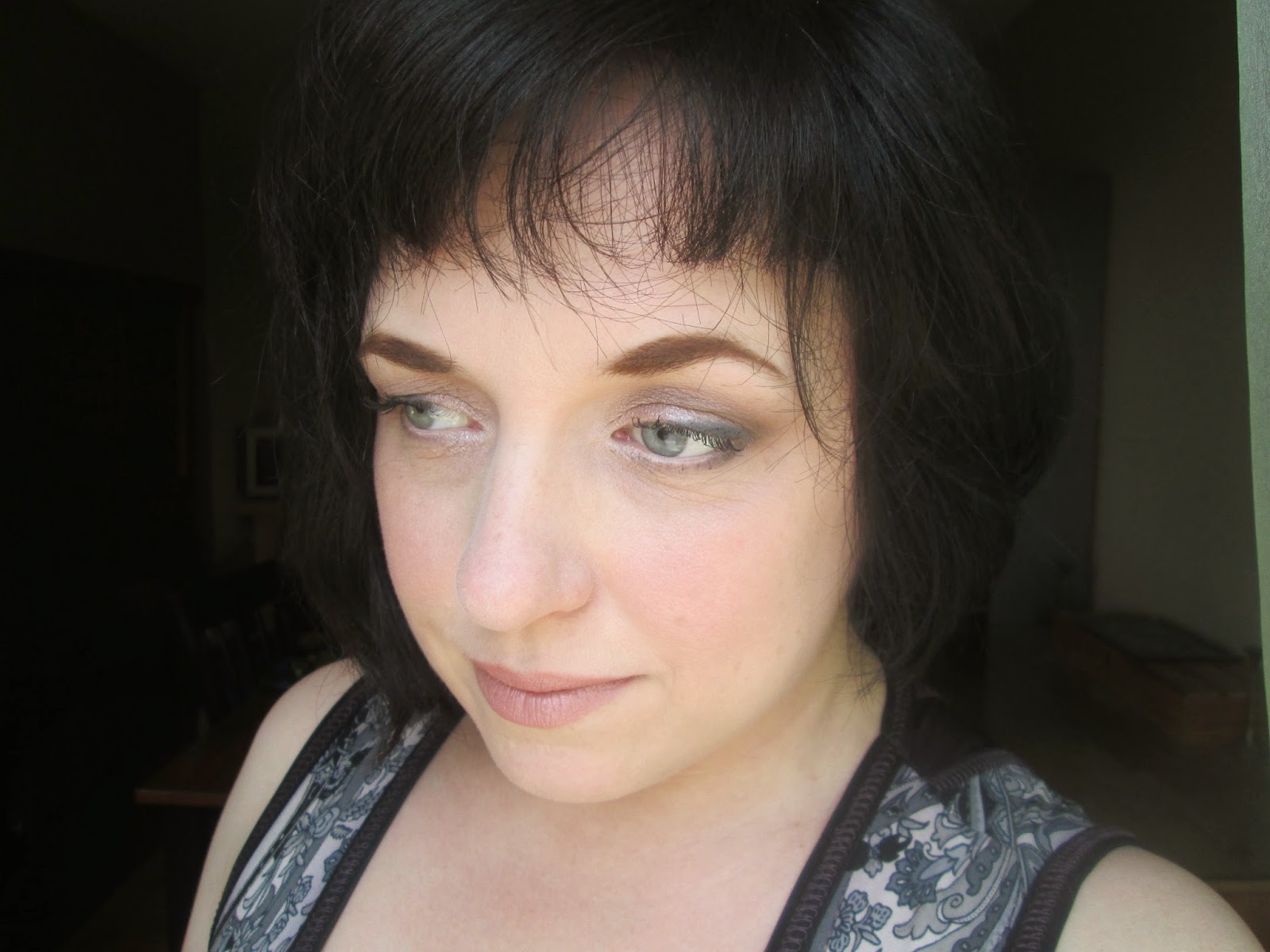 the shadows are all from rouge bunny rouge, which is not uncommon for me when i want a nice, elegant neutral look, since they make the best neutrals around. yeah, i said it. there are individual shades from other companies that are divine, but none of them seem to be able to create neutrals that have the depth and distinctiveness of rouge bunny rouge.

alabaster starling: this is pretty bright for a neutral, actually, but it's not as stark as a true white. there's a bit of warm pinky beige mixed in with the milky white base that winks at you through the silver shimmer. it looks like it might be intimidatingly frosty, but in fact, it's extremely easy to apply it so that it's daytime friendly. in this case, i've used it over the entire mobile lid, including the entire inside corner [upper and lower] and just under the brow as a highlight.

umber firefinch: a cool medium brown that can be built up to a fairly dark brown. i love that this one can be extremely subtle or full-on smoky and i love the fact that it remains brown and doesn't just look like a faded black. i've applied it in the crease and outer "v" of the eye on the outer half of the lower lash line.

sweet dust seriema: an elusive purple-grey tone that looks a little like woodsmoke. it's beautiful on its own, but it's even more incredible used to blend between dark and light shades. i've diffused it above the crease to soften the edges of "umber firefinch" and again to blend the dark and light shades along the lower lashline.

for blush... i cannot tell a lie. i forgot what blush i'm wearing. i think it might be rouge bunny rouge "gracilis", but i might be thinking that just because i was wearing it the last time i did a look with these shadows. i can't be that repetitive, can i?

finally, the lip. i struggle a bit with nude lips, because most shades either bring out shadows around my face that make me look ill, or they're too hot and brown, which tends to make me look feverish, or they look like i slapped cheap concealer on my lips. what you're looking at here is the first nude lipstick i ever bought, mac "blankety". while still a nude, the brown tones are balanced by enough greyish pink that it i don't find it competes with the cool elements in my complexion. yes, there is apparently a nude for everyone.

so now that i've broken the mould by wearing neutrals, i have to admit i'm eager to get back to my more colourful ways. that said, i do have something else in the neutral vein that i'll be sharing with you very soon. i promise. something new. in the meantime, feel free to share some of your own neutral favourites!

Unknown said…
In support of your subversive theme esp with all the loud palettes like Electric all around, I'm giving you a round of applause. *clap clap clap*

The blending is impeccable. Love the 2nd look, it's so "fresh-faced". Falling in love with Rouge Bunny Rouuge neutrals as well.

morelikespace said…
Glad you liked it! Electrics are great and all, but sometimes a girl needs to beige :-P

RBR is a fantastic brand for decidedly non-boring neutrals that are super-easy to work with. They almost blend themselves.
2:55 PM