get off my lawn

July 02, 2014
i've had my differences with bell. actually, i've had for more differences than sames, which doesn't even make sense, but i'm angry and spluttering.

some days ago, some weird marks appeared on the sidewalk and streets near me. this happens fairly often and never seems to lead to anything, so i just assume it's some weird version of municipal employee hopscotch and try not to think about it anymore.

but then i noticed that the marks were spreading... 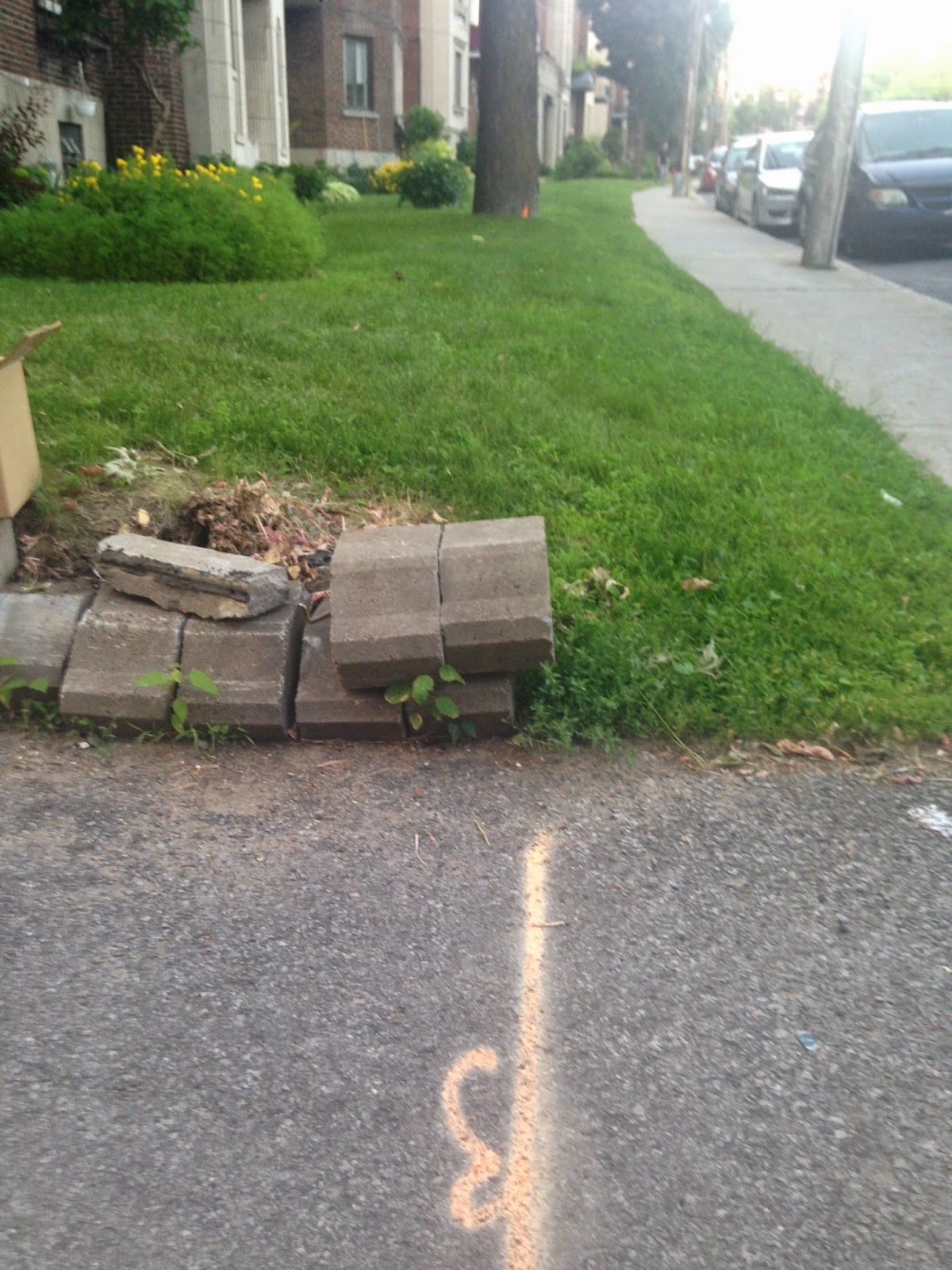 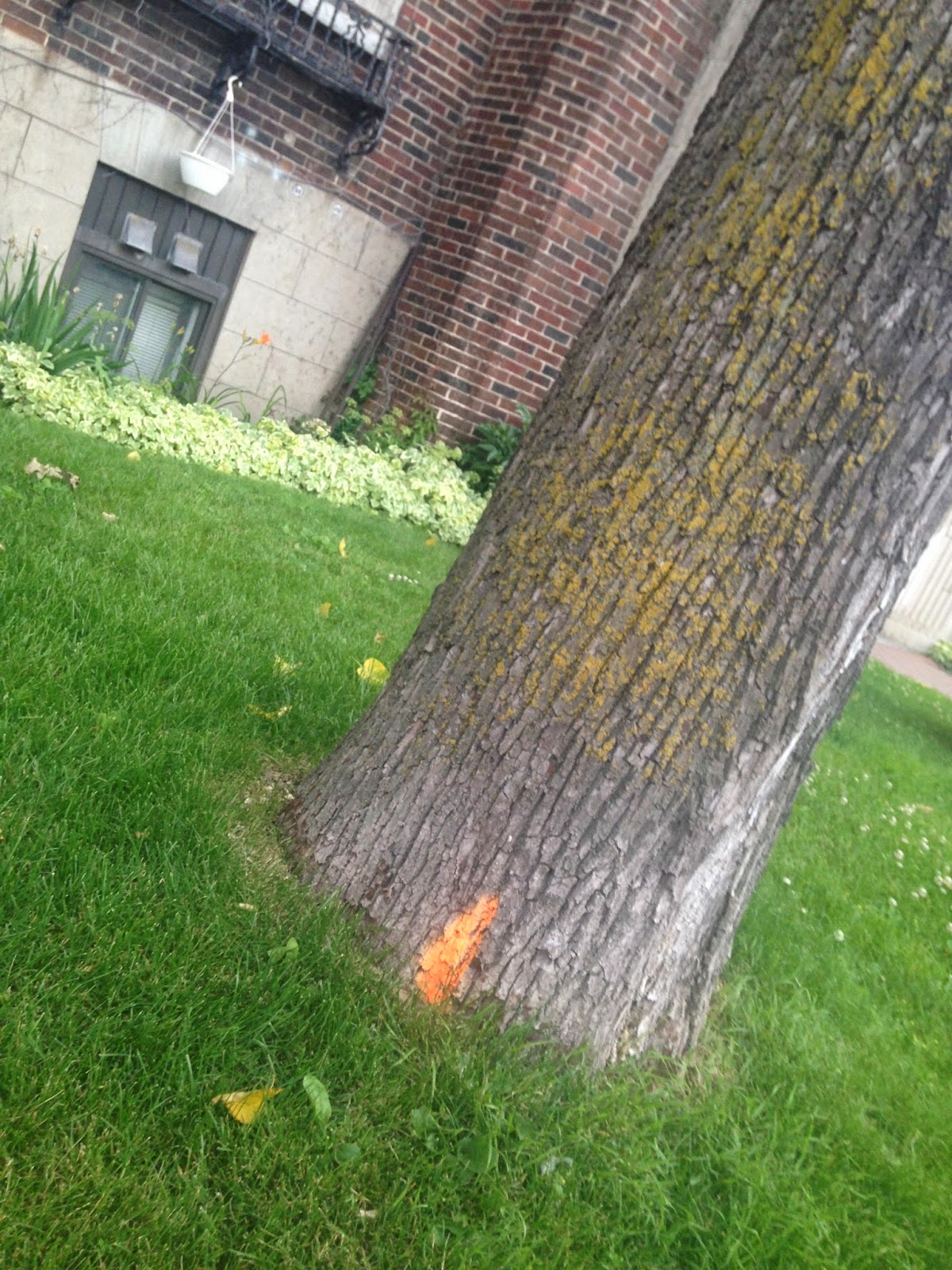 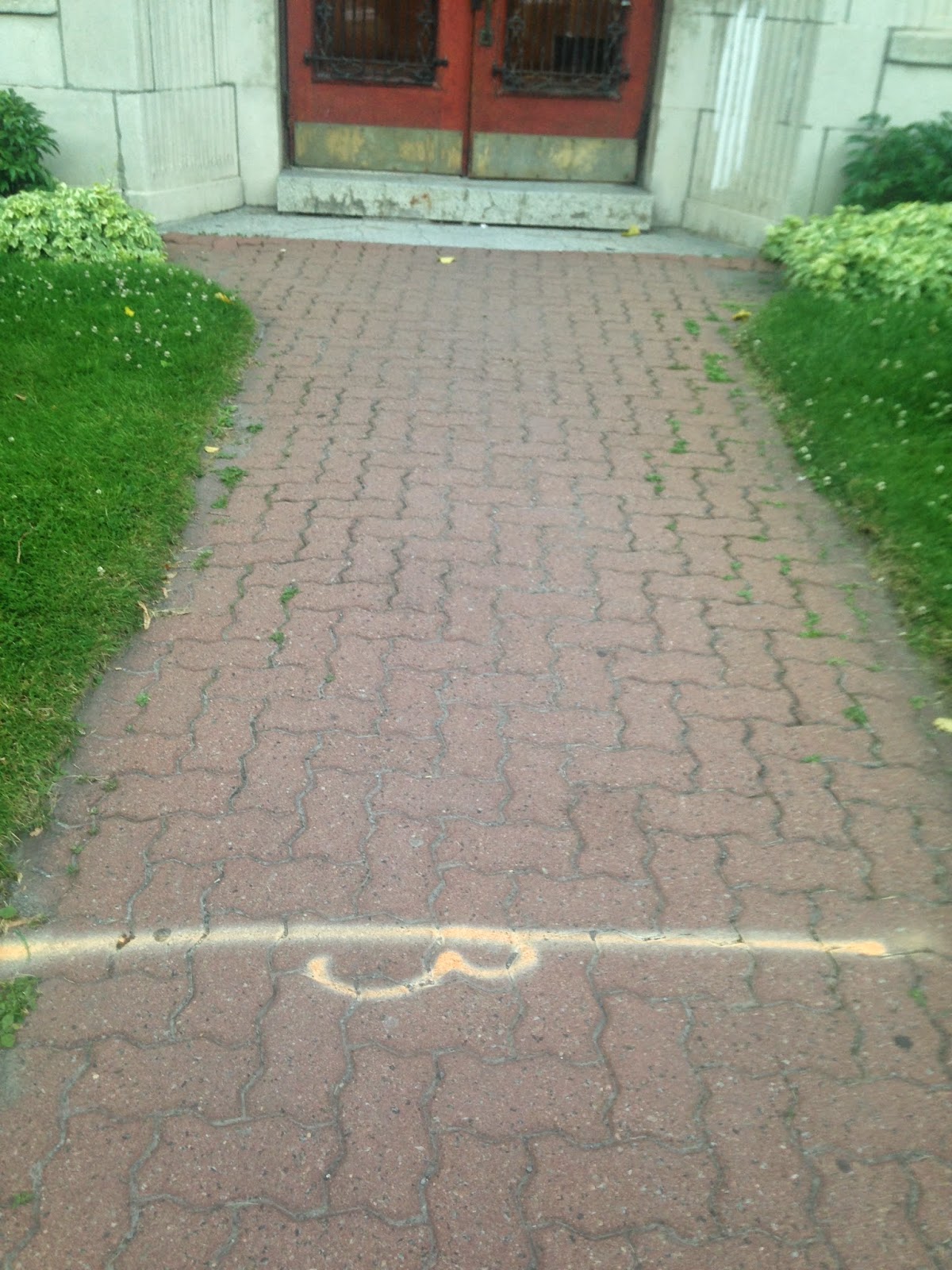 we're no longer dealing with marks that are just on the sidewalk, but on the lawns/ gardens of buildings all the way up the street. some even appear on trees.

apparently, these marks are being made by bell, to indicate where they're going to need to gouge out the earth to lay knew cabling. basically, every building on this stretch of street is going to lose a third of the ground in front of it, including every tree now standing. because progress.

now, i wouldn't be happy about this under any circumstances. one of the things that's appealing about where i live is that i have a large, beautiful tree right outside my office window. it inspires me as i procrastinate and think writing while i surf the internet looking at cats. but if this were a project that was going to, say, provide free or low-cost internet to underprivileged people [the kind of project chebucto community net does in my hometown], i would at least be able to console myself for the loss of the tree with the knowledge that it gave its life for a decent cause.

this isn't a community project, however. it's just bell laying the groundwork [yuk yuk yuk] so that they can make more money. and canada already pays one of the highest rates for telecommunications in the world for service that falls well behind other developed nations. what's worse is that our costs have increased while those of most others have decreased and the speed of our service is growing at a slower rate than other countries, meaning we're paying more to fall farther behind.

this isn't exclusively a bell problem, of course. it's a problem with the entire canadian telecommunications system, something which stephen harper had promised to fix [and one of the few policies on which he and i are in agreement]. it hasn't happened and canadians are still held hostage by a cabal of telcos who pretend to be protecting our national interests from the big, bad american corporations who would otherwise descend on our market and use their faster service as a trick to split open our heads and devour our brains when we weren't looking. [note: i'm not certain they worded the argument in exactly that way. i'm paraphrasing.] so there's plenty of blame to go around to all sorts of telecommunications providers.

but only one of them is ripping up my trees.

i haven't been a customer of bell's for some time [as regular readers of this blog will know]. i've even persuaded most of my extended family to walk away from them. i've criticised them extensively on this blog, with good reason. so this almost feels personal. the nicest part about the room in which i've written my attacks on bell, the room where i was subjected to hours of customer service failures, is that i can look out at a rather bucolic landscape, while still living smack in the centre of a major city. and bell wants to take that away from me so that they can increase their already fat bottom line. and i don't even want to think about how i'm going to have to live with heavy machinery, noise and dirt in front of my home while this great work is being accomplished.

there's not really anything i can do about this. the property doesn't belong to me and even if it did, the city is able to expropriate it if it deems it necessary and give it to corporate interests. i suppose i could chain myself to the tree in protest, but i have a feeling that bell would just cut it up with me attached.

so right now, i'm just trying to reconcile myself to the loss of my tree and the tiny patch of greenery that's given me some pleasure over the last several years. you can take my foliage, bell canada, but you can never take away my freedom to call you on your b.s.