give credit to dom, who said all along that this was germany's year. after england was eliminated, my loyalty basically transferred to germany, who are always such an entertaining team to watch, but i was honestly worried that they would let themselves get rattled, as they have in the last few world cups. i'm kind of glad to be wrong. so once again, a week after the grand occasion, i took to the kitchen to prepare a feast in honour of this year's champions. [i'd actually intended to get to it earlier this time around, but i've had a sort of bizarre health issue, the kind of thing that only happens to me.]

german cuisine is simple and hearty, which makes it fairly easy to prepare, although not necessarily great for summer. i did, however, manage to find a couple of things that were suitable, although this still isn't the lightest meal in the world. [when we're talking european cuisine, it really would be easier if they had these competitions in the winter, although i guess i understand why they don't.]

first up, i made german-style potato salad. much of german cooking embraces the humble potato, but this variation is warm-weather friendly. instead of the more standard north american version, german potato salad is made with potatoes, chopped herbs [i used parsley, chives and a tiny bit of tarragon] along with vinegar and sugar. i have to say that this felt strange to me, being used to the creamier version, but the herbs make it much fresher. plus, of course, it's much healthier. it replaces the fatty dairy element, but it also features parsley, which is unfairly relegated to the role of garnish these days. in fact, it is both tasty and incredibly healthy. [it's worth noting that a lot of fresh herbs are quite concentrated in important nutrients. plus they make your food taste better.]

to accompany this, i made a traditional german onion pie. well, almost traditional. dom's reaction was "it's a lot like quiche". yes, in fact it is basically quiche, but quiche is french, so we call this version onion pie. although it requires you to turn on an oven, which is never a great experience in the summer, it is very simple to prepare, so you don't actually have to spend much time in close proximity to the oven. [why would you ever need to stay in close proximity to an oven? -ed.] [shut up, editor -kate] 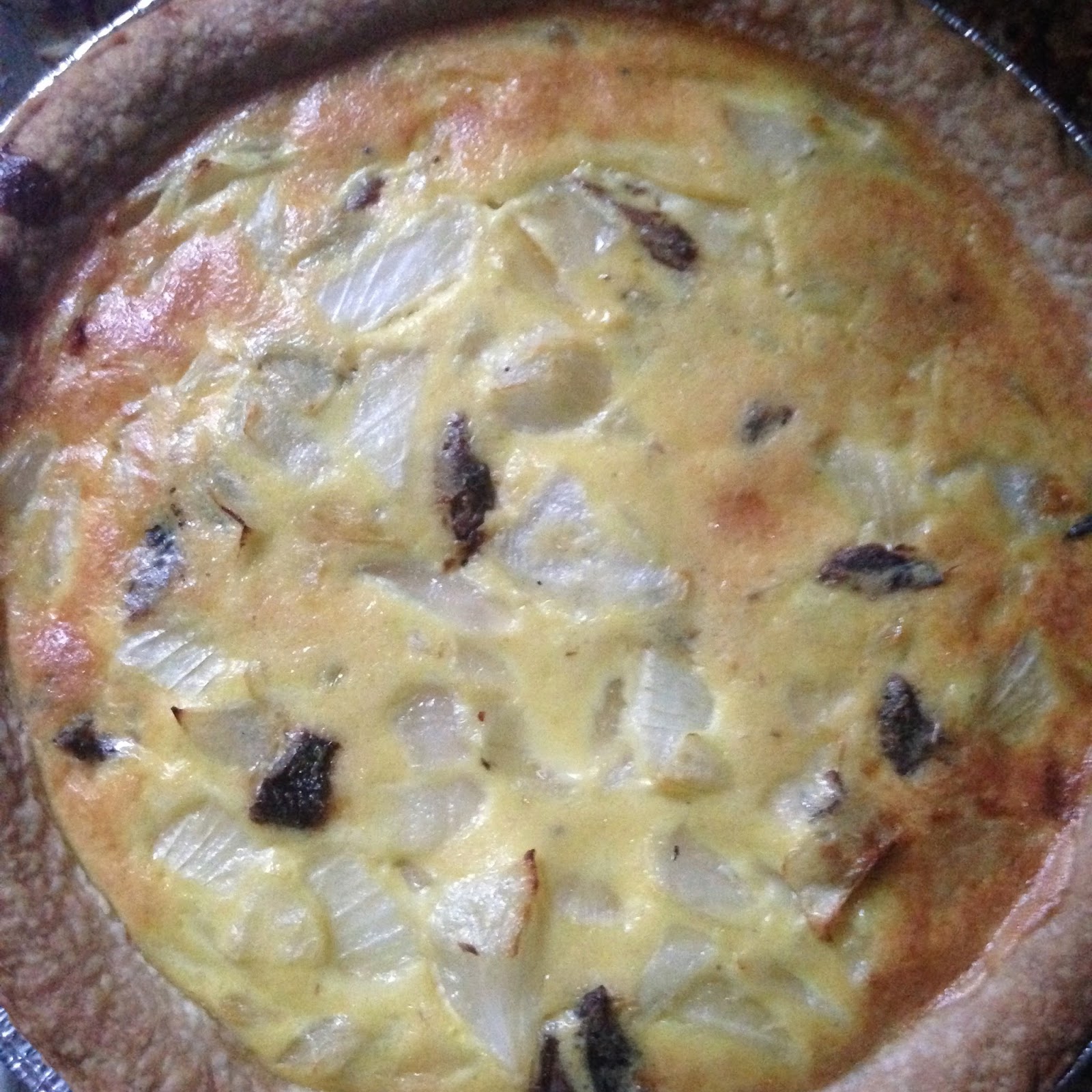 1 giant onion, chopped [probably a 1.5-2 lb onion; spanish is good and vidalia would be amazing]
4 eggs, lightly beaten
1 cup sour cream [light is acceptable if you want to make it healthier]
1/4 cup smoked herring, crumbled [other smoked fish like mackerel or trout would be acceptable as well
2 x 9" pie shells
butter or oil for frying

i should note that the smoked fish is something that i threw in there and it's not part of any recipe i came across. however, smoked fish of various sorts is common enough in german and eastern european cuisine, just be careful not to add too much, since it's much stronger in flavour than anything else in the dish. you could also add some cheese instead, for a vegetarian version.

preparation is simple: fry the onions over until they are very limp and translucent. have the pan plenty hot when you first add them, but after a minute or so, reduce the heat to the low side of medium. that way, you can basically leave them be while you prepare the rest of the ingredients. you just have to stir them occasionally to prevent them from burning. if you arrange the pieces in a circle around the edge of the pan, it'll help ensure they cook evenly.

while you have the onion frying, mix the eggs, sour cream and herring together. when the onions are done, add them and blend everything together. the smoked fish should add enough salt on its own, but you can throw in some pepper if you like. there should be some liquid from the onion pan. make sure that goes in there too. the final mix should be thick , but still pourable. if it's too thick, add a little milk or water. 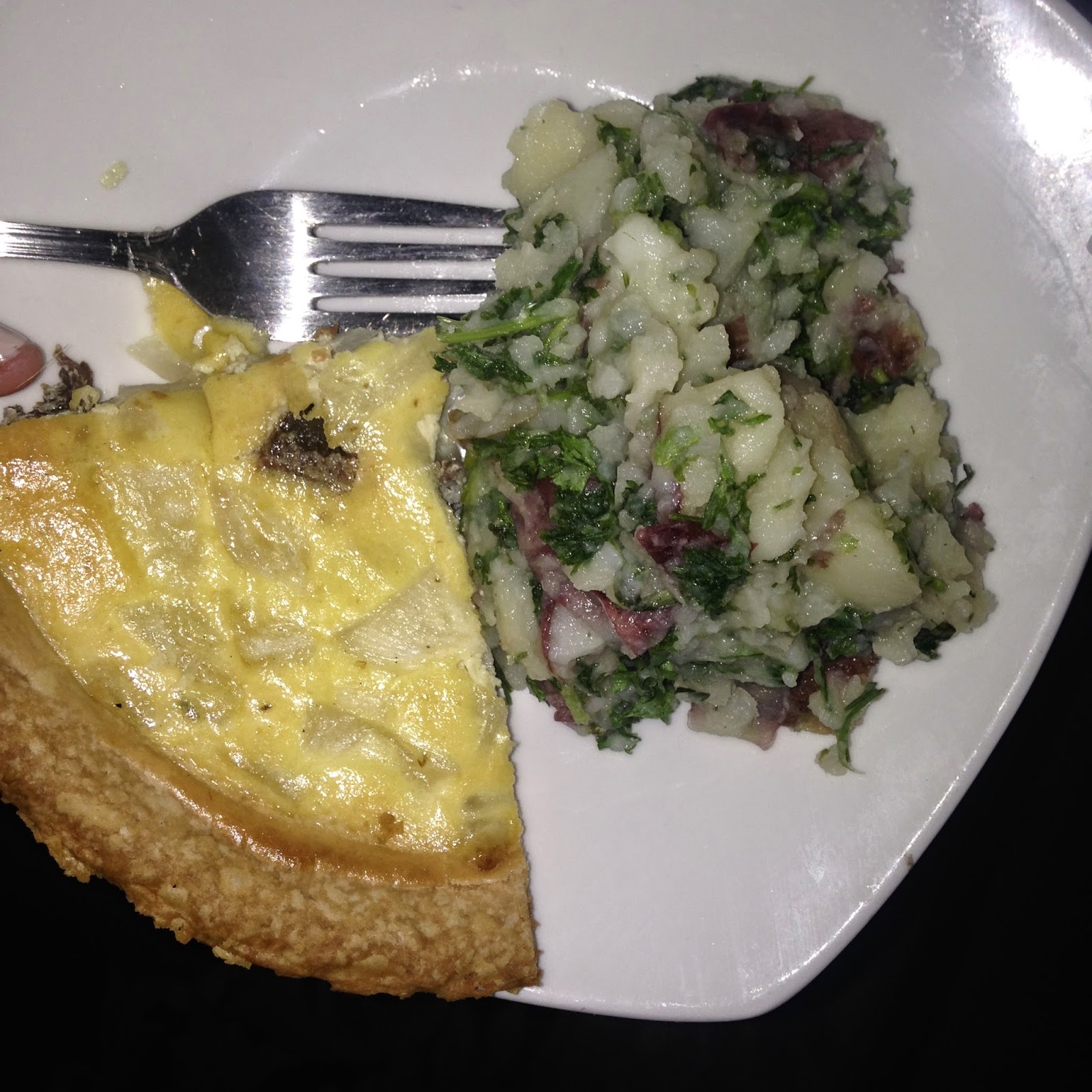 put the filling into the pie shells and pop into a 375 degree oven for 30-45 minutes. i find that every oven is different, so the rule of thumb i use is that the quiche pie is done when you can lightly bounce a fork on the top. remove from the oven and allow to cool for a few minutes before slicing.

i'm always sad to see the end of the cup, since it means that i won't have the games to entertain me and that i have to go back to thinking up meals with no theme to help me. i considered doing a version of 'eat the cup' for the euro, which will happen in two years, but there really doesn't seem to be enough meaningful variation between a lot of european cuisine to make it a real challenge. dom had suggested a 'drink the cup' version, which sounds awesome, but of course, i wouldn't be preparing anything myself. [nor would you be in any condition to do so, i suspect. -ed.] we shall see what the future brings.

i've seen many comments that this may have been the best world cup ever. i don't know nearly enough about world cup history in order to make that sort of statement, but i will say that it is definitely the most entertaining one i've ever watched. the strength of the teams compared to past teams is subject to debate, but i found that there was an overall balance, so that there were relatively few easy games for anyone. [in fact, the easiest games were more shocking than anything else, since they generally involved the pummelling of a previously strong side.]

man candy of the matches

chile's alexis sanchez, who has a great smile, among other assets...

and who doesn't appreciate the bad boy charms of mario balotelli?

or how about balotelli's teammate, flaxen-haired, azure-eyed ciro immobile?

and finally, we bid a fond farewell to didier drogba, since this is almost definitely the last time he'll be making a world cup appearance. at the ripe old age of 36, he can still put the youngsters to shame.

by the way, if you miss the man candy too much, you can always check out soccer players in underwear, a site i came across during my diligent research. it's exactly what it says it is.