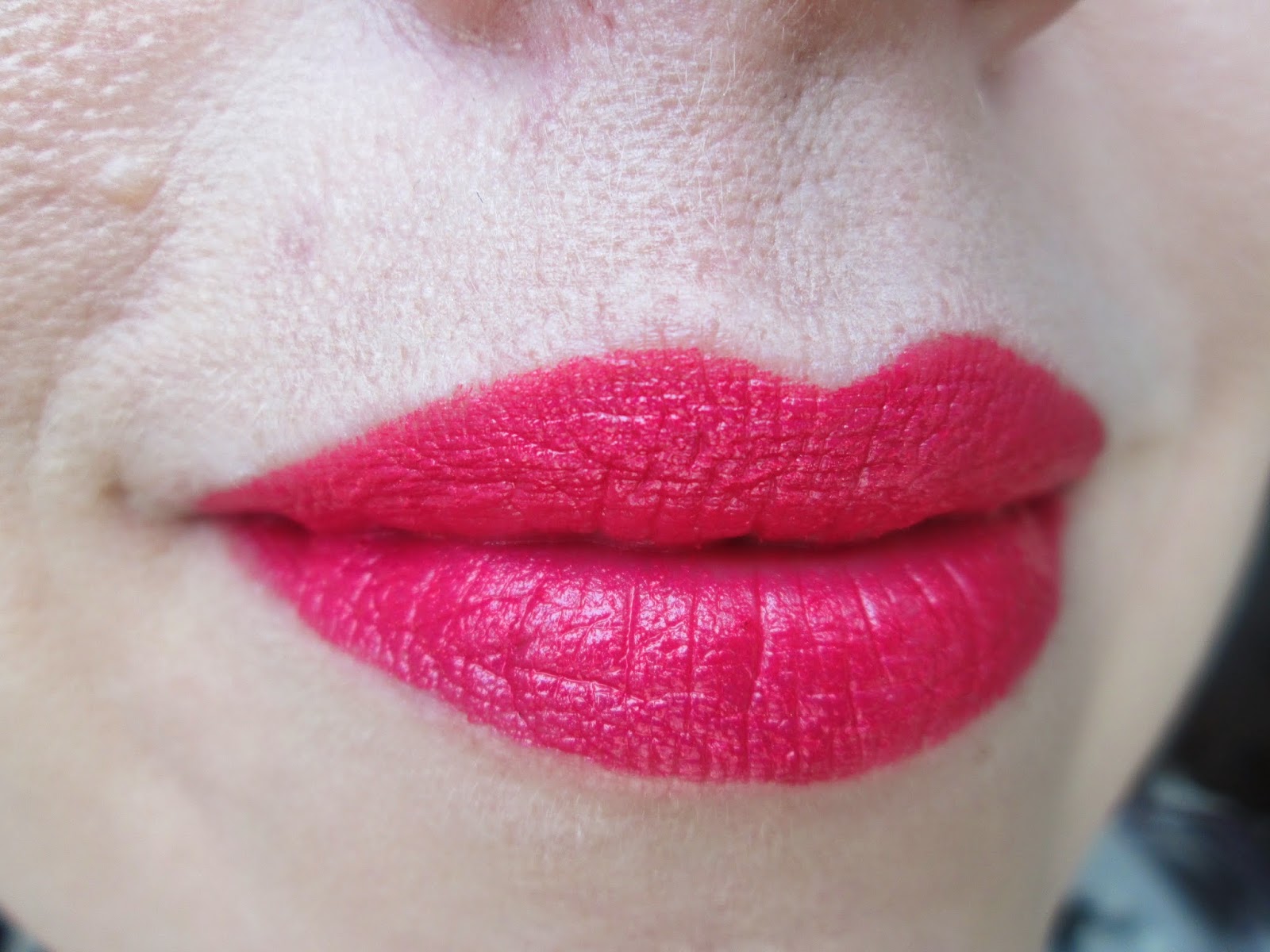 a few weeks ago, i did a "sneak peek" of the new guerlain rouge g shades being launched this month at counters everywhere. not content with just a peek, i rushed back to pick up one of the new shades, the inexplicably limited "rose grenat".

being a limited shade, "rose grenat" makes an obvious first pick from the new offerings. it also happened to be my favourite, a gorgeous velvety red-pink shade [i honestly don't know whether i'd say it was more pink or more red] that gives intense colour with even a light coat. you could blot it down to a stain, of course, but this colour just begs to be allowed to go full-force.

the shade is very creamy, although i haven't noticed any bleeding/ feathering during wear. i did find that it faded a little faster than i would have expected from such a bold colour, although this was more obvious on a day where my lips were particularly dry. it won't survive a meal [although there will be a slight stain afterward], but it will look nice throughout the day if you're not eating or drinking frequently. i did find that it was slightly prone to fading in the middle first, which meant that there was a faint "red ring of shame" around the border of my lips [especially after drinking coffee or tea]. however, this meant that it could easily be touched up just by patting a little colour on the centre of the lips. and guerlain rouge g lipsticks have a handy little mirror for such emergencies. 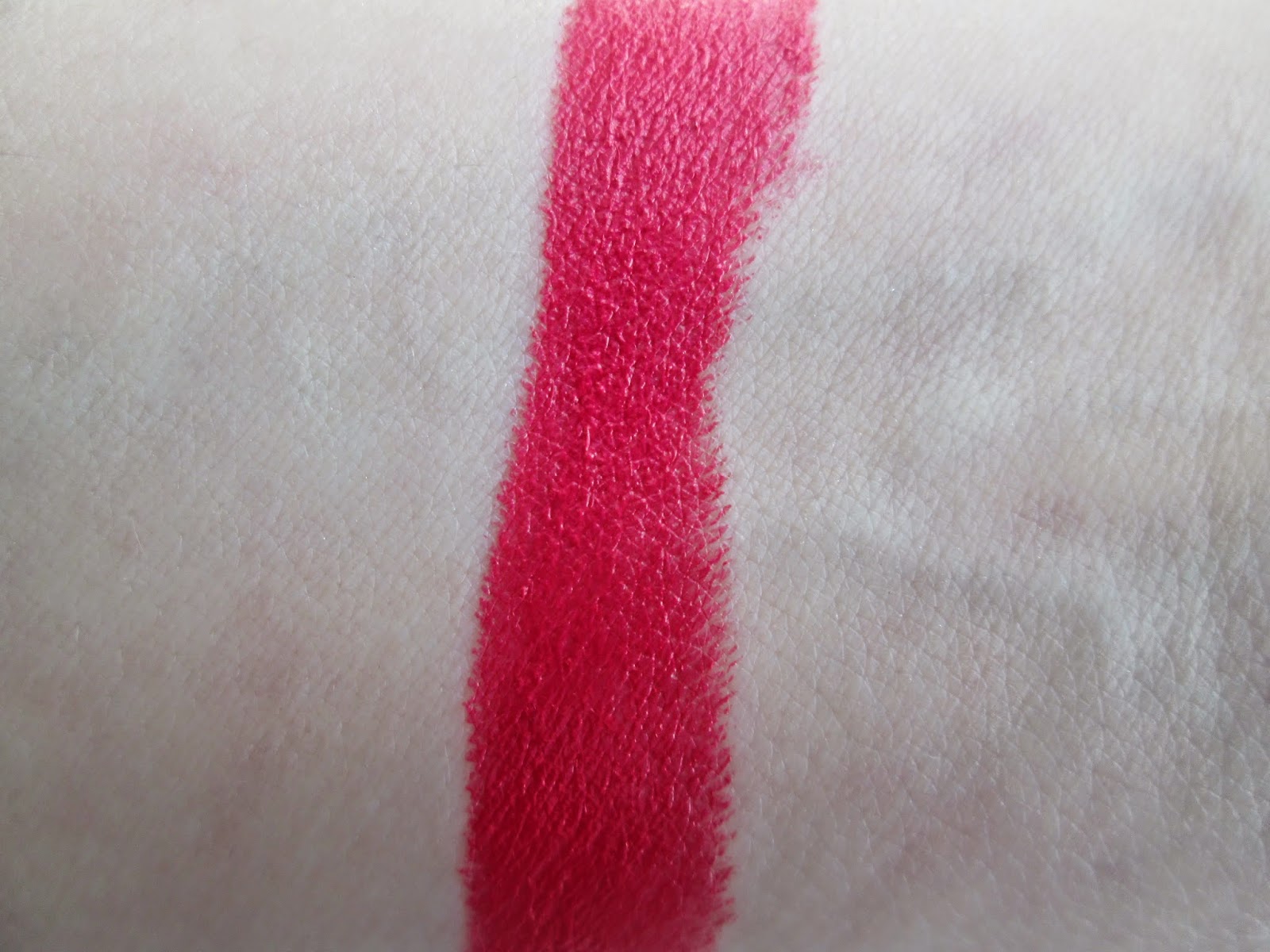 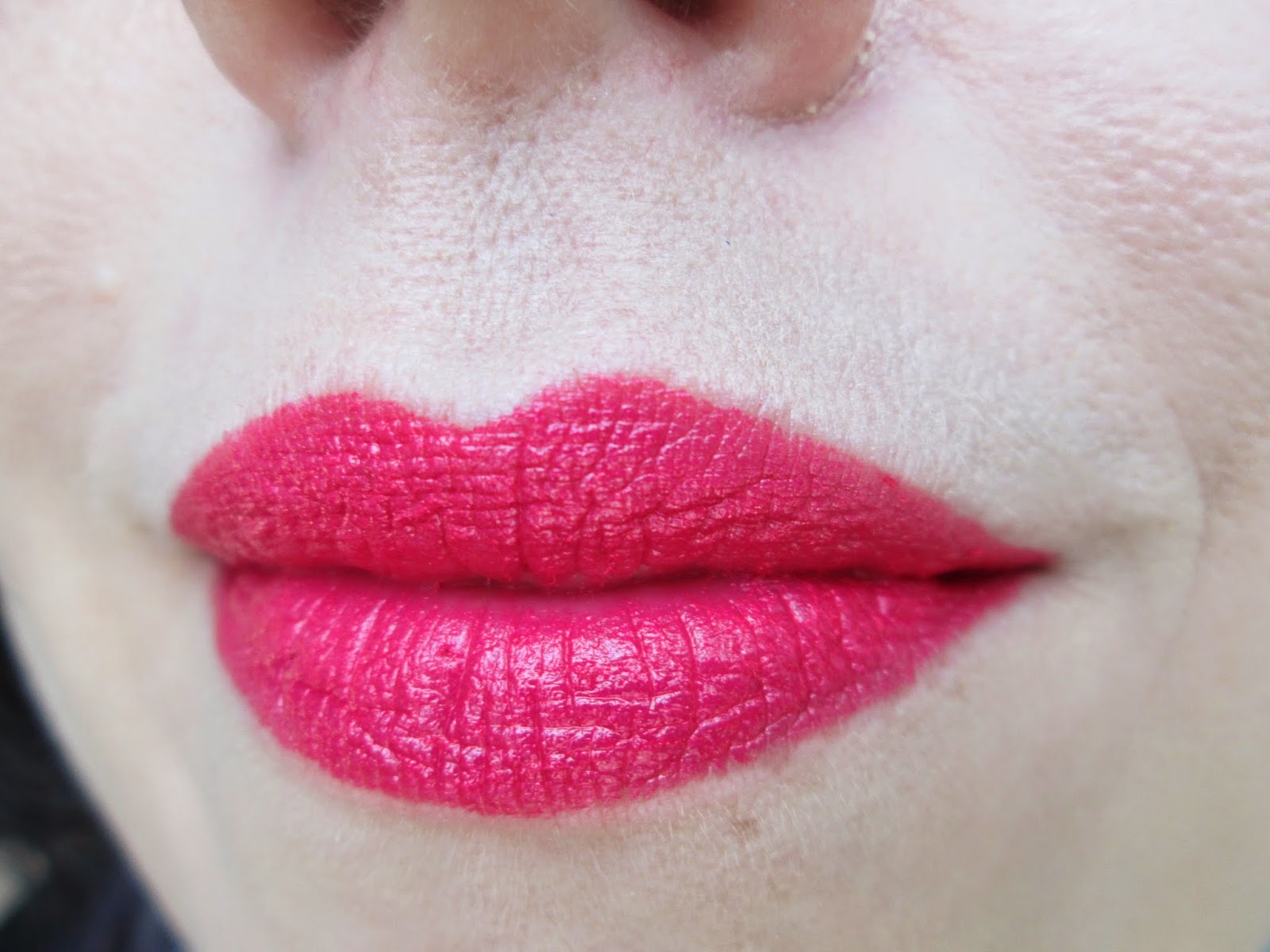 like a lot of rouge g colours, there's an almost imperceptible shimmer that doesn't necessarily affect the colour, but it does tend to make lips look fuller and smoother as it refracts light ever so slightly. this is truly one of my favourite qualities in this formula and one that makes me willing to shell out the money, even when there are similar colours at a lower price point.

in this case, there are a lot of red/ pink lipsticks, but not that many that can compete with "rose grenat" in terms of pigmentation. "madame batifole" is cooler, pinker and has slightly more visible shimmer. urban decay "catfight" is a bit darker and more matte, which makes it seem just a little muted next to "rose grenat", which goes on and remains fairly glossy.


what "rose grenat" really resembles to me, however, is "provocative" from the guerlain holiday collection. if you have one, i really don't think you would need the other, since both the shades and the formula are nearly identical. however, in my case, this is a godsend, because my tube of "provocative" went missing a couple of months ago. i'm reasonably certain that it has to be somewhere in my apartment [although there is a faint chance that it rolled out of my purse somewhere], but several expeditions have failed to turn it up. this marks only the second time in my life that i've lost a makeup item [the first was my original jar of armani eyes to kill eye shadow in "lust red", which i was at least able to replace] and i'm pretty livid at myself for losing something that was limited edition. but since guerlain so thoughtfully put out a near-match [if pressed, i would say that "rose grenat" is ever so slightly cooler and a bit glossier], the feeling of loss is mitigated. i have a feeling that both of these lost items have since become some of the world's priciest cat toys.

this is the sort of colour where you just have to stand back and let it do its thing. unless you're going to a rocky horror theme party, you won't want to bother with a lot of eye makeup. personally, i opt for plain and mostly matte neutrals. i don't even want some shimmer to distract from the power that is "rose grenat".

likewise, i don't like to pair it with clothes that are too busy or intricately patterned. yes, this is one of those lipsticks that has to be the focal point of everything, not just your makeup. it's striking worn against a solid block of black, of course [something true black, not a well-loved jersey shirt], but i also love it paired with a strong colour that balances it. i sort of liked this combo with a billowy h+m blouse i picked up on sale recently, which happens to be almost the exact same colour. very much a look for a bright season person [which i believe myself to be]. 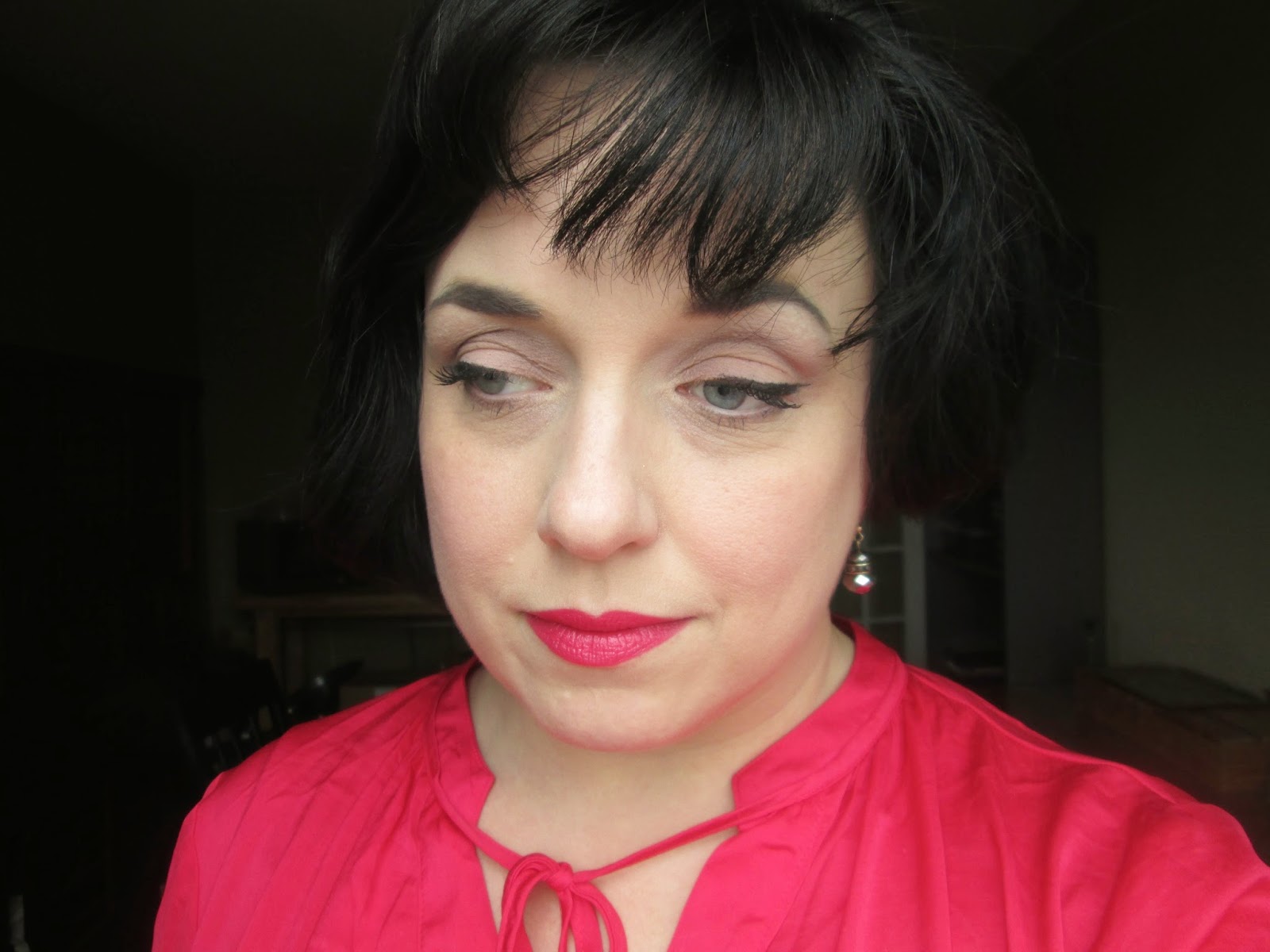 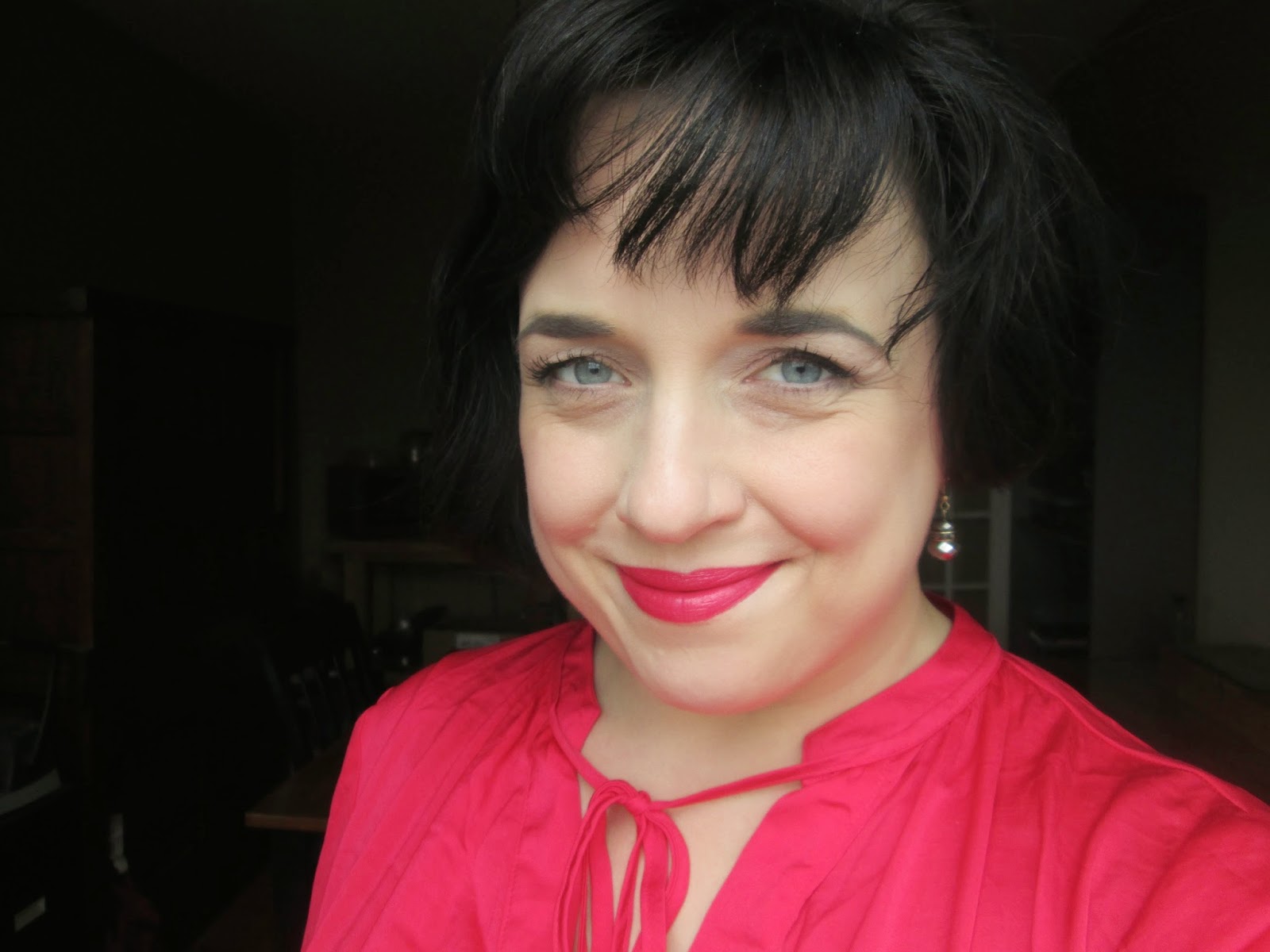 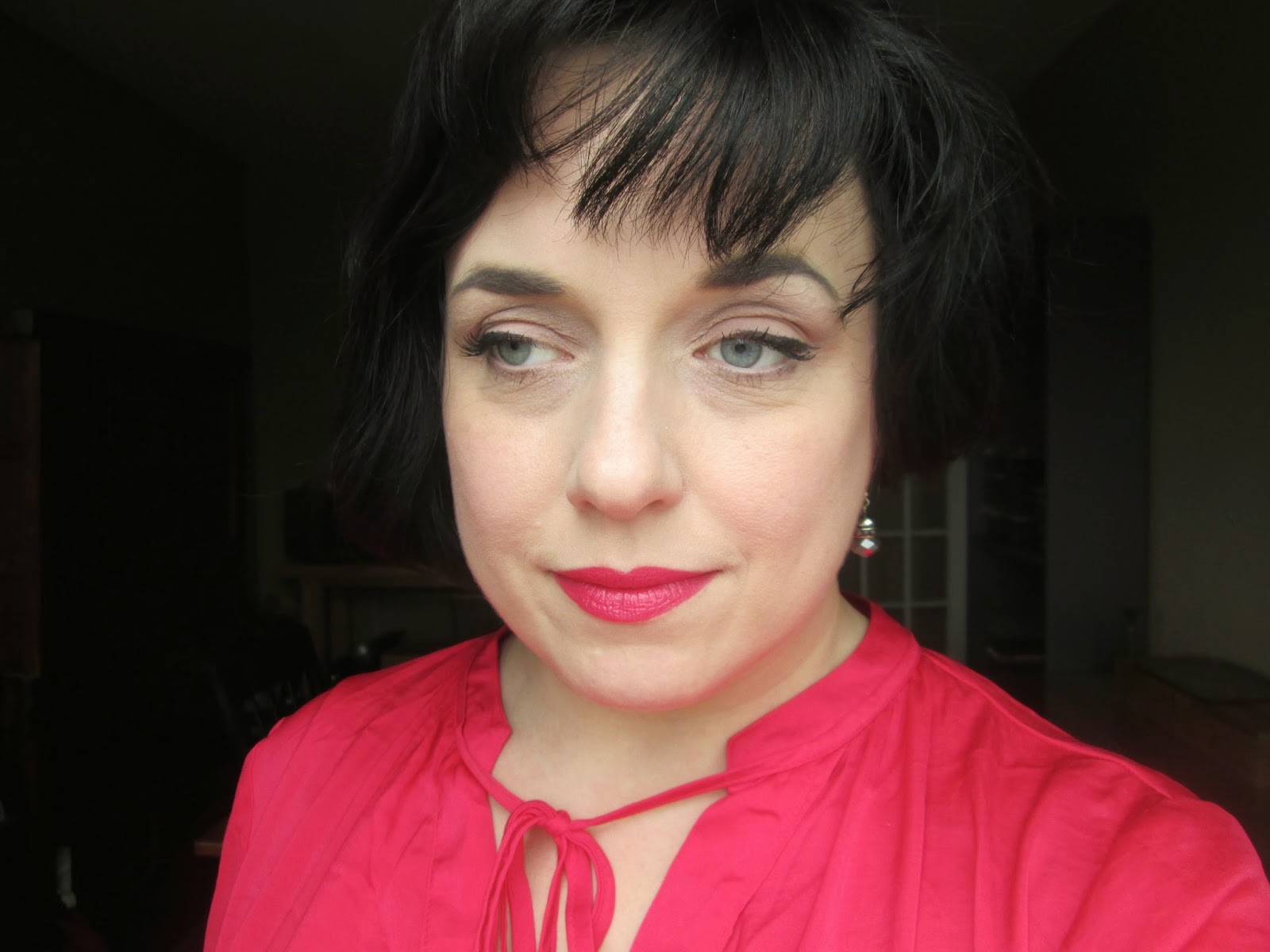 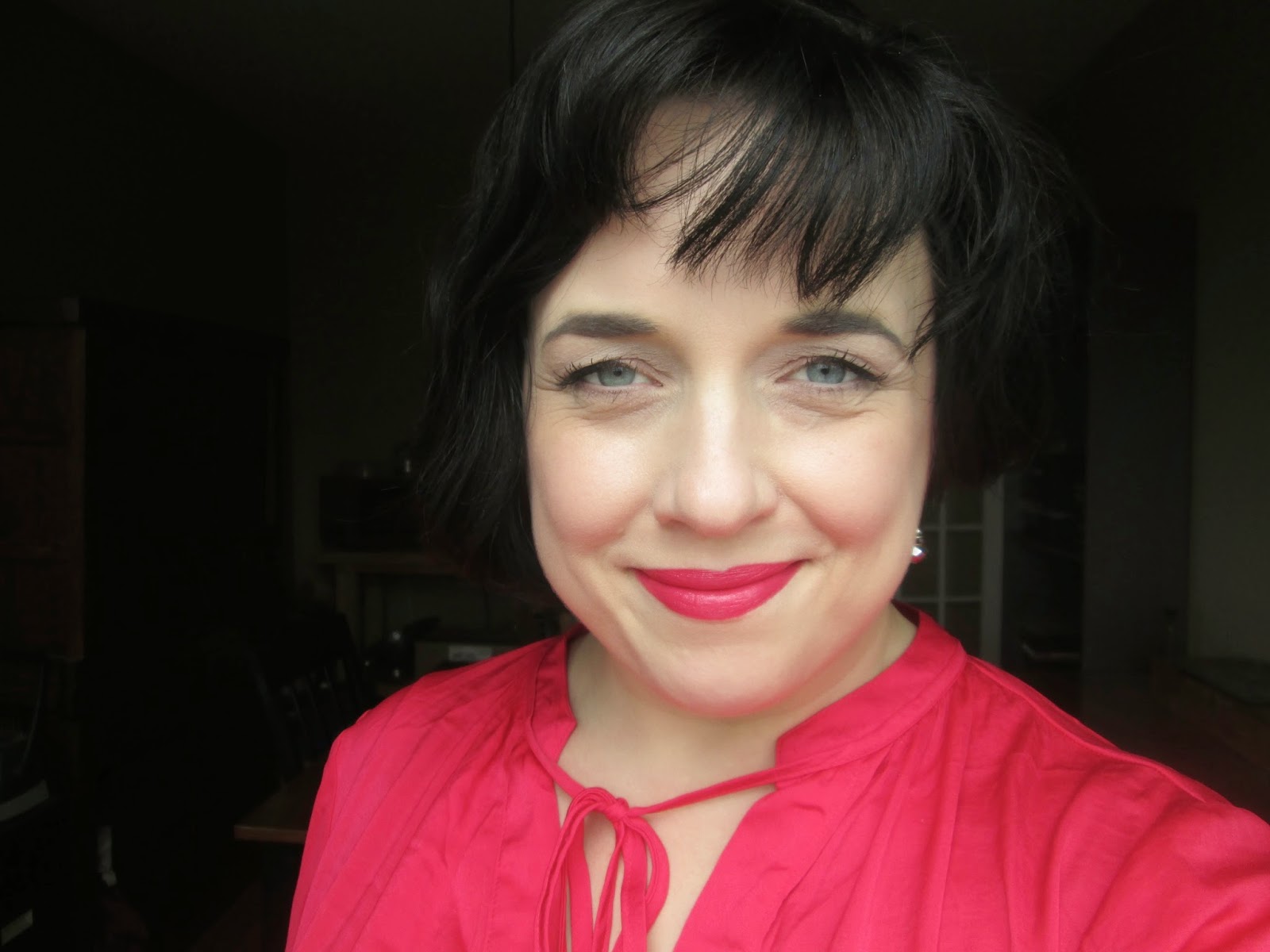 Unknown said…
Rose Grenat looks gorgeous on you! It has the right amount of red and fushia, not to glossy nor is it completely matte.

Your makeup is really highlights the lipstick, nice!
5:06 PM

morelikespace said…
Thanks very much! This is more or less my default look- neutral eyes and strong lip. It's easy to pull off, but has impact.
7:07 PM