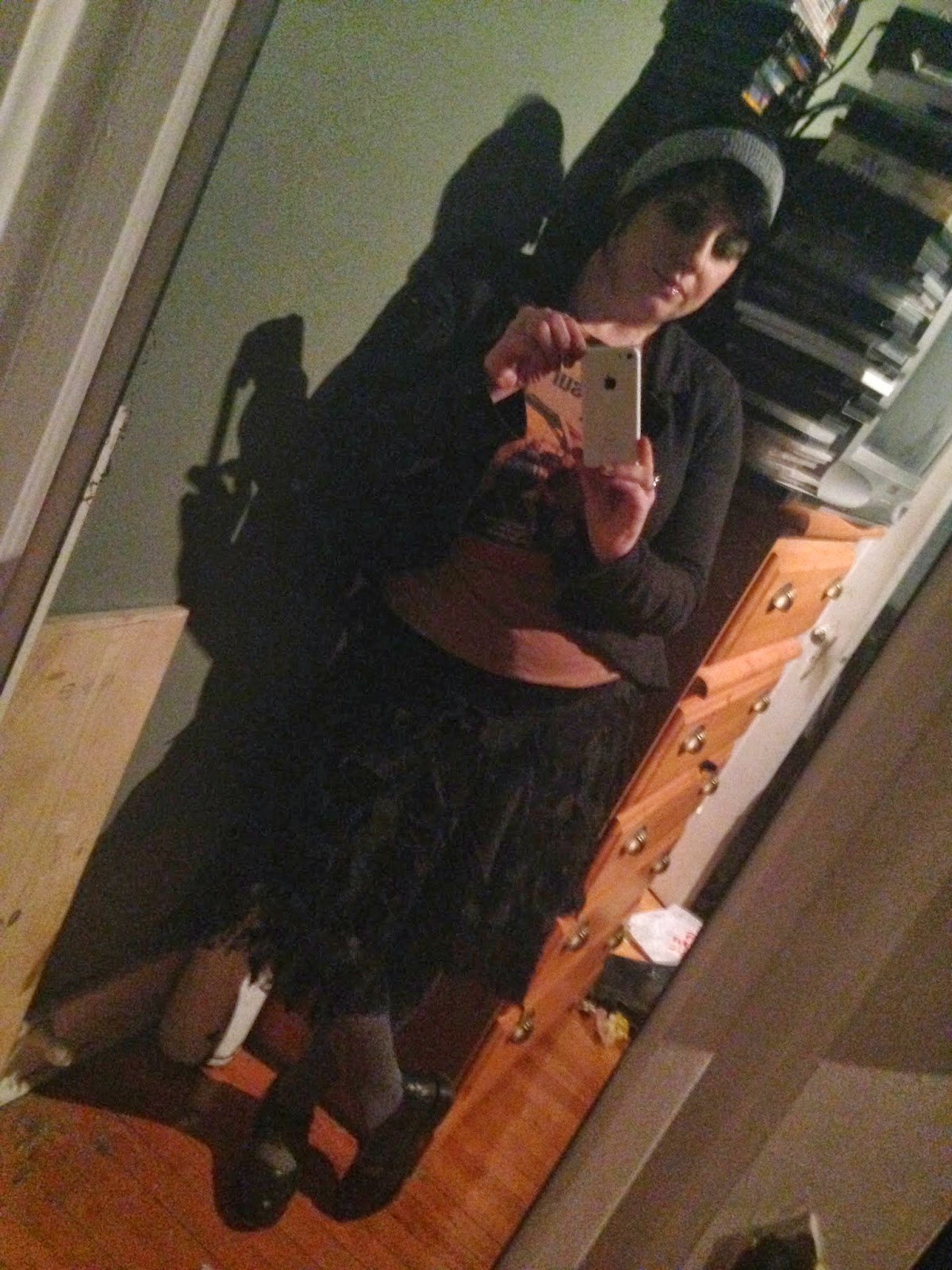 it's understood that you always want to get yourself ready for a "big night out", the sort of night where you're invited to something swanky, or just very special- like the premiere of your own movie. but those are few and far between for most of us. in fact, it's far more common to have to get ready for a "little night out"; an evening spent with friends getting dinner or drinks where you'd still like to look nice, but you don't necessarily have to pull out all the stops.

for me, that included a recent foray out to a comedy show [battlecom, which i highly recommend not just because it's hosted by a good friend, but because it is a really energetic, different take on what a comedy show can be] and a live show at katacombes with brooklyn's black marble [nicely done retro electronica] among others.

so how does a girl get ready for something that isn't super-fancy, but where it's still nice to look like you know how a mirror works and might have glanced at one before going out?

well, in my case, i went with a few wardrobe staples and a slightly smoky eye with a sheer lip. kinda casual, but casual in that "yeah, i totally checked to make sure this worked" kind of way. i also decided to employ a rather thick hairband and a clip to disguise the worst hair day in living history. i'd decided to try growing my hair out a little, but it's currently at a stage where i can make it look decent for about ten minutes after i get it dry and then everything falls apart. if you're connected to me via facebook, you may well have seen my april fool's day profile picture of me sporting a kim jong-un haircut [which may have been mandated to men in north korea]. that was partially inspired by my ongoing frustrations with my hair and my increasing impatience at waiting for it to grow. i'm hoping i'll get it to the point where it doesn't irritate me, but i'm not sure when that's going to happen. also, the warm weather hasn't arrive yet, which means that the true irritation hasn't even begun. 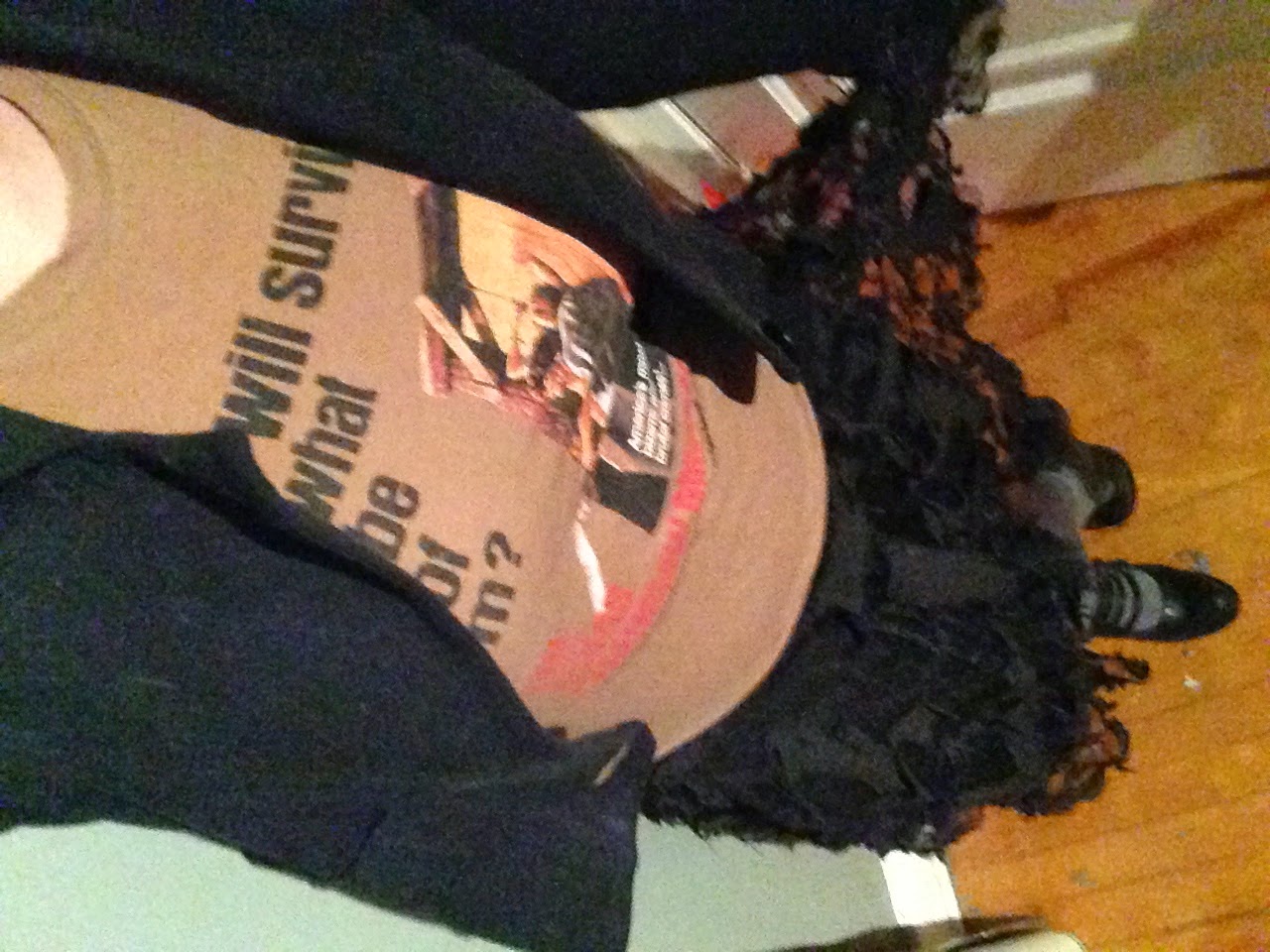 i kind of went for a contrast with the outfit: that's a circle skirt from dinh ba, one of my favourite local designers, which has a gorgeous tattered overlay. to avoid seeming too dressy, i paired that with my texas chainsaw massacre shirt, but threw a blazer from annie 50 [another great local designer], so there's a nice formal- informal- formal vibe happening. you can barely make out the shoes i'm wearing, but they're fluevogs [of course], a nice sturdy brogue from the adrian family [the model i'm wearing is no longer available], a few members of whom have found shelter in my closet.

for the makeup, i made some use of my first armani eye shadow palette purchase. i've hesitated on getting one of their four-shadow palettes forever, not because i didn't want one, but because i was never quite sure where to turn first. i ultimately opted for the "medusa" palette, a fascinating combination of two greens- one leafy, the other more olive, a maroon and a matte black. the shades seem like a potentially strange combination, but they actually harmonise extremely well, with a mix of warm and cool tones between them. the only thing you might want to add is a highligher [and of course, some mascara. 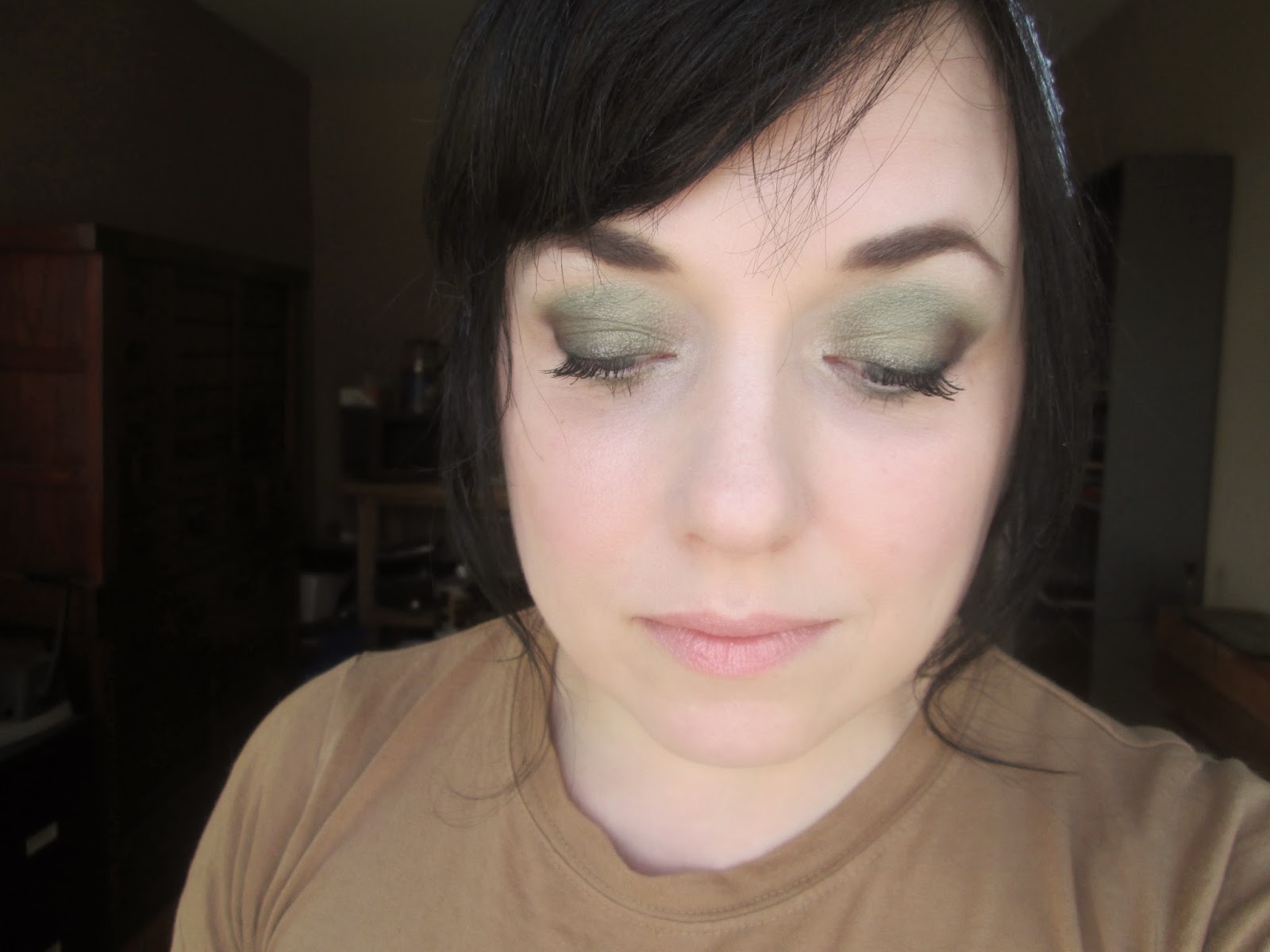 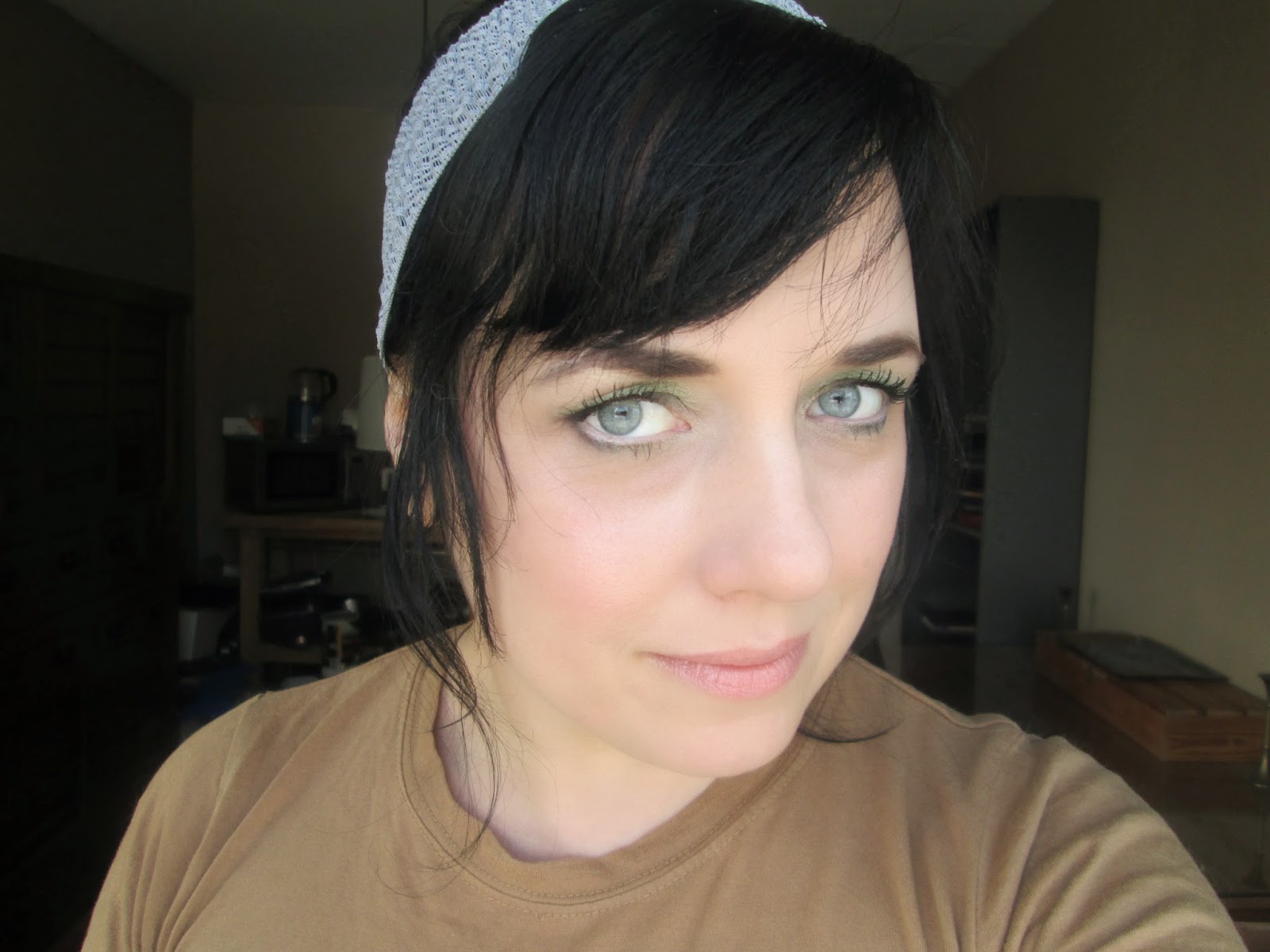 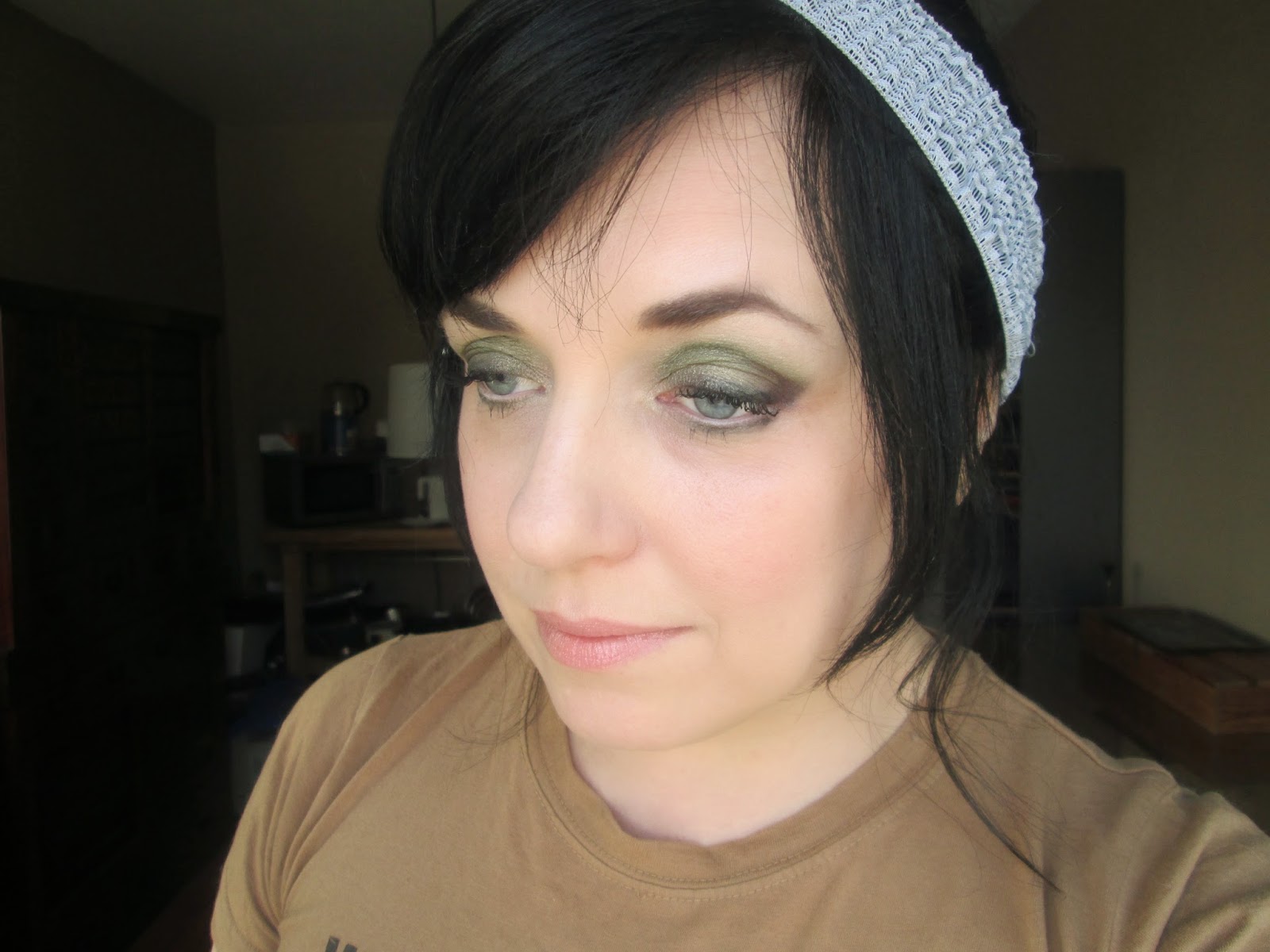 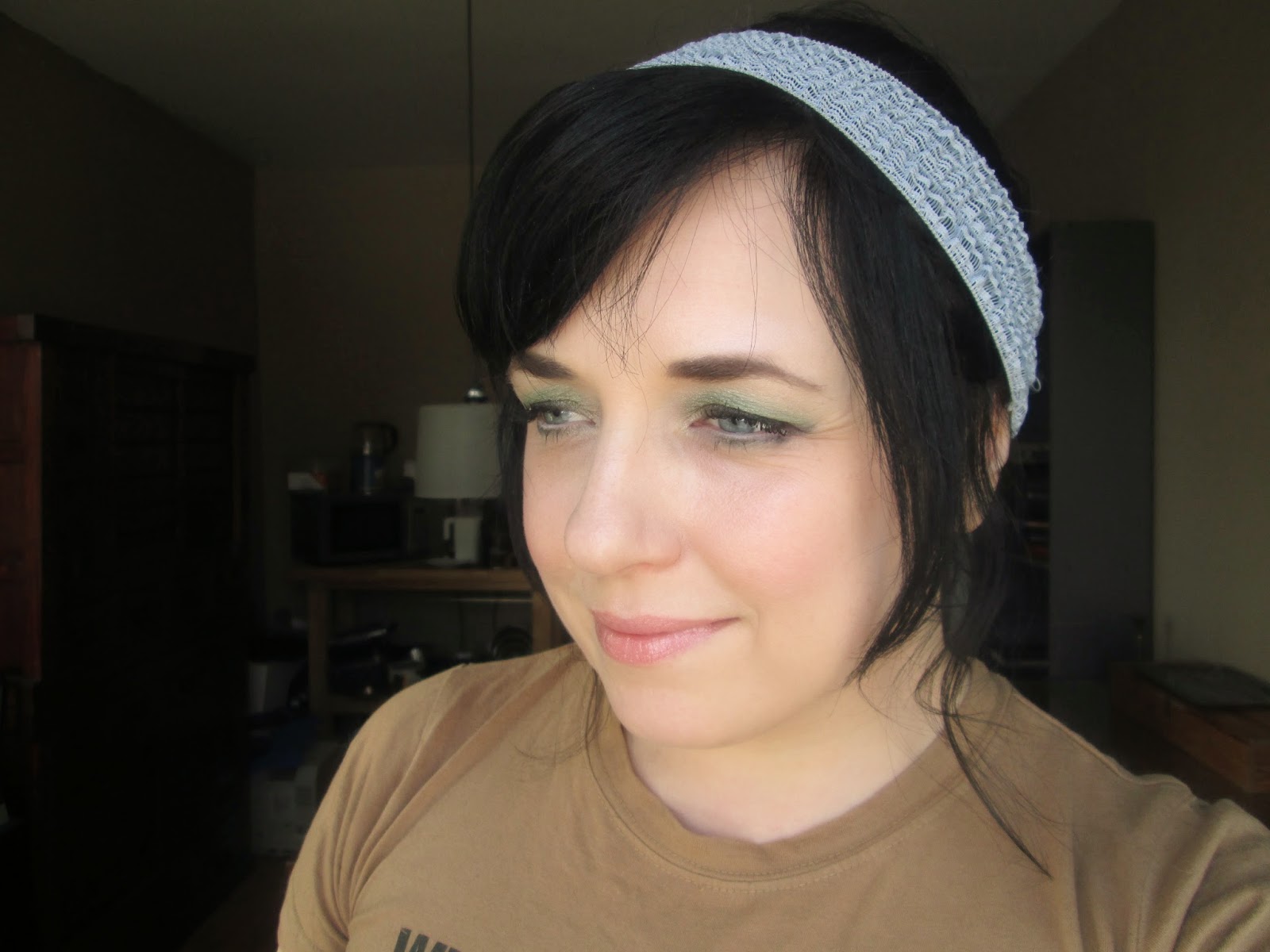 in this case, i have the two shades of green on my lids, the maroon in the outer corners and crease and the black lining the eye, as well as adding a little depth to the outer corners. the mascara is also armani- eyes to kill.

on the cheeks, i'm wearing a combination of nars "seduction" and rouge bunny rouge liquid highlighter in "sea of tranquility". if you've been hesitant to try one of nars' deeper shades [like "seduction"], i hope that this convinces you that it's very possible to wear them, even when your skin is very fair.

the final touch was one of yves st. laurent's new gloss volupte shades- rose orfevre [#19]. it's a soft, light pink with gold shimmer that adds some sparkle and just a hint of colour and warmth to my lips. i was surprised at how much i liked a shade that seemed so subtle, but it balanced the more dramatic eye perfectly, without just disappearing. although it's a fairly liquid formula, it has surprising lasting power. it certainly faces, but a hint of the colour and quite a bit of the shimmer survived a drink and snacks, which is more than i would have expected for such an understated shade. it does have the fig-funk that i detest about the rouge volupte lipsticks but, fortunately, i don't seem to be allergic to the glosses. [the lipsticks make my lips crack and swell in under an hour.] based on what i've seen thus far, i might have to hold my nose and investigate these little wonders further.

so that was my evening out look and whether it was due to my judicious makeup and wardrobe choices [ok, it almost definitely wasn't], it turned out to be a very fun night indeed. any thoughts on what you like to wear when you're taking an evening out that's not exactly casual, but still far from formal? feel free to share in the comments.

auxiliary beauty said…
I love your green and maroon combination! Since most of my friends wear little if any makeup, I tend not to doll myself up too much when going out with them. Last night I went to a nice bar for drinks with grad-school friends (getting drunk on a Tuesday night: ah, grad school), and wore a taupe eyeshadow (NARS Lhasa) and a pinky purple lipgloss (NYX Raspberry Tart). But when I go out to dinner with my boyfriend, I almost always swap the gloss for a red or fuchsia lipstick. Not that he cares, but it makes me feel a little more dressed up.
8:01 PM

morelikespace said…
Thanks! I really do recommend the Medusa palette- it's excellent in terms of quality and originality.

One of the great perks of moving to self-employment is the ability to decide that you can go for drinks basically whenever you want. Because some of us never wanted to leave grad school for the real world...

I so wish that we could get brands like NYX and Milani in pharmacies here. They seem to have a lot of nice products!
11:18 AM

auxiliary beauty said…
NYX is surprisingly hard to find in stores in the US; I've ordered all my NYX products online. But I love having easy access to Milani, especially since it's cruelty-free. The brand is hit-and-miss in my experience, but their good products are really good.
11:49 AM

morelikespace said…
Yes, it's the cruelty-free status of both that appealed to me... Hopefully someone picks up both brands for international distribution soon.
7:51 PM