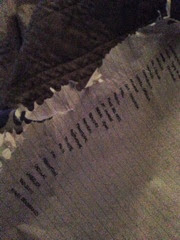 last night, i pulled out my current notebook [i always use one at a time for everything] and immediately became puzzled. i had three pages of notes prepared for a project i'm working on. i remembered creating each of the three pages in some detail. but when i opened my notes, there were only two.
my brain is such that i immediately assumed i'd imagined doing the third [actually the first] page, but it seemed like  an awfully vivid memory. realizing that this meant that i had either created the page or was having the most mundane hallucinations ever recorded, i made a point of looking through every page of the notebook. three times. I checked the coil spine [i'm not fancy when it comes to my notebooks]. i couldn't even find a shred of paper to indicate that the missing page had ever existed.
finally, i checked the place where my notebook had been and several feet away, cowering behind some facial wipes and edging towards the space under my night table, was the missing page. i don't know how it managed to wrestle free [some telltale marks indicate that it might have had some assistance from a feline]. and i certainly don't know how it managed to remove all traces of itself from its former home. but i'm happy to have it back all the same.
what worries me more than anything is that my writing projects are apparently trying to run away. how bad a writer am i that the things that i create want to get far away from me before i work on them more. for that matter, when did my writing become self-aware? is this like a super- small scale version of  "the terminator"? are my bouts with writers block just some kind of preemptive action? i'm pretty certain that i've never found advice on this on any writing forums. probably because most writers create things that are happy to be associated with them. me? i apparently create literary emo kids. 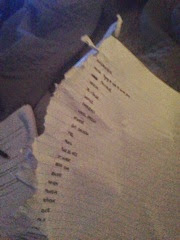