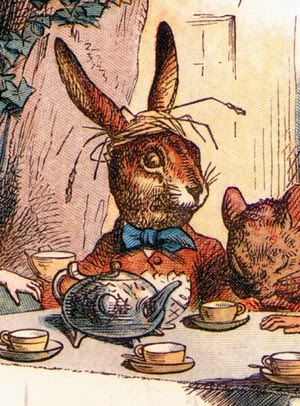 i've been horribly slack about taking swatch photos. i've no excuse, because we've actually had sunshine and it's been freezing cold, so i haven't really felt like going outside a lot. what can i say? occasionally, the lazies catch up with all of us. some of us weren't going that fast to begin with.

also, dom and i started watching breaking bad a couple of weeks ago, which means that we've basically been spending all our nights bingeing on that and all our days sleeping late and puttering around until it's sufficiently late in the day that we can justify doing just one more disc. it's like we're addicted to something. but more on that later.

but that doesn't mean i haven't had things that i wanted to swatch, because i definitely have. and among those are some new goodies from, you guessed it, rouge bunny rouge. now, it wasn't all that long ago that i did my last review on rouge bunny rouge, but i couldn't resist spoiling myself just a little more, because, after literally months of buildup, two new eye shadows arrived, spun from the usual mix of forest magic and your happiest dreams.

i snapped up both new shades, "rain dove" and "rufous-tailed weaver". several bloggers have already reviewed them and i'm stuck for what to say, because i have gushed about rbr shadows so many times that i believe i have actually exhausted my abilities to say wonderful things about the formula. what's even more perplexing is that even by those high standards, the performance of these excel. dare i say it? dare i let it be spoken? i think that these might be the best rbr shadows ever in terms of the feel and formulation. so there.

the best advice that i can give you is to google the names of these shades and try to find pictures of them on a blogger who has a skin tone close to yours. the brand cautions that there will be differences from one person to another and that was absolutely my experience. seeing them on me, both in swatches and in use, i don't get the same effect that i've seen in other photos on other people. in fact, i like them better on me the way that they are than i think i would have liked them if they turned out the way they looked in other people's photos. ok, i'm not even sure if i can make sense of that last sentence, but please stay with me.

"rain dove" is a soft, light mushroom kind of shade. on my skin, i see a very definite peach-pink undertone, but i haven't seen that in any other blogger photos. your mileage may vary. the shade is fascinating to watch in the sun, because from certain angles, it seems almost rose gold. it is the absolute apex of class and refinement in terms of colour.

i don't really have anything like it, which surprised me, because after a while even i start to believe that i've collected every possible permutation of neutral in eye shadows. "angelic cockatiels" is more intense, more shimmery and much more copper. i had thought that chantecaille "sel" might be close, but "sel" is quite a bit cooler.

"rufous-tailed weaver" was a bit of a gamble for me. i worried it would be too similar to rbr's "abyssinian catbird" to warrant having both, but as it turns out, i'm exceptionally happy to have gambled. in fact, the two look more alike in photos than they do in person or in use. "rufous-tailed weaver" is a shimmery yellow-toned brown with a soft golden shimmer. it's what i'd call an acorn brown, which puts it in the interesting territory of being a neutral-lover's neutral: it doesn't pull particularly warm [reddish undertones] or cool [grey undertones]. some have picked up a hint of khaki in the colouring, which is perhaps where the comparisons to "abyssinian catbird" come from. i don't see that on me, but it should be noted that i don't really see it when i wear "abyssinian catbird" either.

i've shown the comparison with the catbird below, alongside mac "tempting", which i thought would be similar, but looks much redder/ warmer next to "rufous-tailed weaver".

of course, i couldn't stop myself with just two little eye shadows, so i also picked up the cult favourite "solstice halcyon". it's one of the rare rbr satin finishes, although it has a little more sparkle than "gracious arasari" or "trumpeter koel". on me, it's a very cool mauve with just a hint of taupe- the cooler tones really leap to the fore. i see more pink in it when i turn it towards the light, a warmer pink, and there are bits of fine silver shimmer strewn throughout it. it is a real heart-stopper. in a good way.

i compared it to the limited edition mac shade "innuendo", a similarly hard-to-define cousin of taupe. "innuendo", though, is lighter and softer.

unbeknownst to you, gentle reader, you've already had a glimpse of me wearing this one. i used it in combination with "gracious arasari" for the photos in my last sci/art post and i have to concur with the brand that the two together are the perfect nude eye makeup.

lastly, i ordered one a new shade of colour burst lipstick, the fuller coverage rbr lipstick formula. most of rbr's lipsticks are very natural and on the warmer side and this one is no exception. "watch out eve" is a medium-light salmon pink with a silver shimmer. the shimmer can make it look lighter from many angles, but it's generally a very flattering natural tone that will work on lighter and medium complexions. it's hard not to love shades like this that are just so easy to fit with almost everything.

i love this formula and find it hydrating and comfortable. the one fault that it has is in wear time- i actually find that rbr's semi-sheer lipsticks last better. i don't mind reapplying regularly, but if that's a problem for you, you might want to steer clear.

i ordered all of these products direct from rouge bunny rouge's web site. their customer service is excellent and both of my orders have arrived in less than a week. however, be warned that international orders are shipped via dhl, which in north america means that whatever the shipping charges are from rbr, you can expect to pay double that or more to the courier when your package arrives.

of course, i couldn't resist showing you what "rain dove" and "rufous-tailed weaver" look like together, as well as "watch out eve" in action... 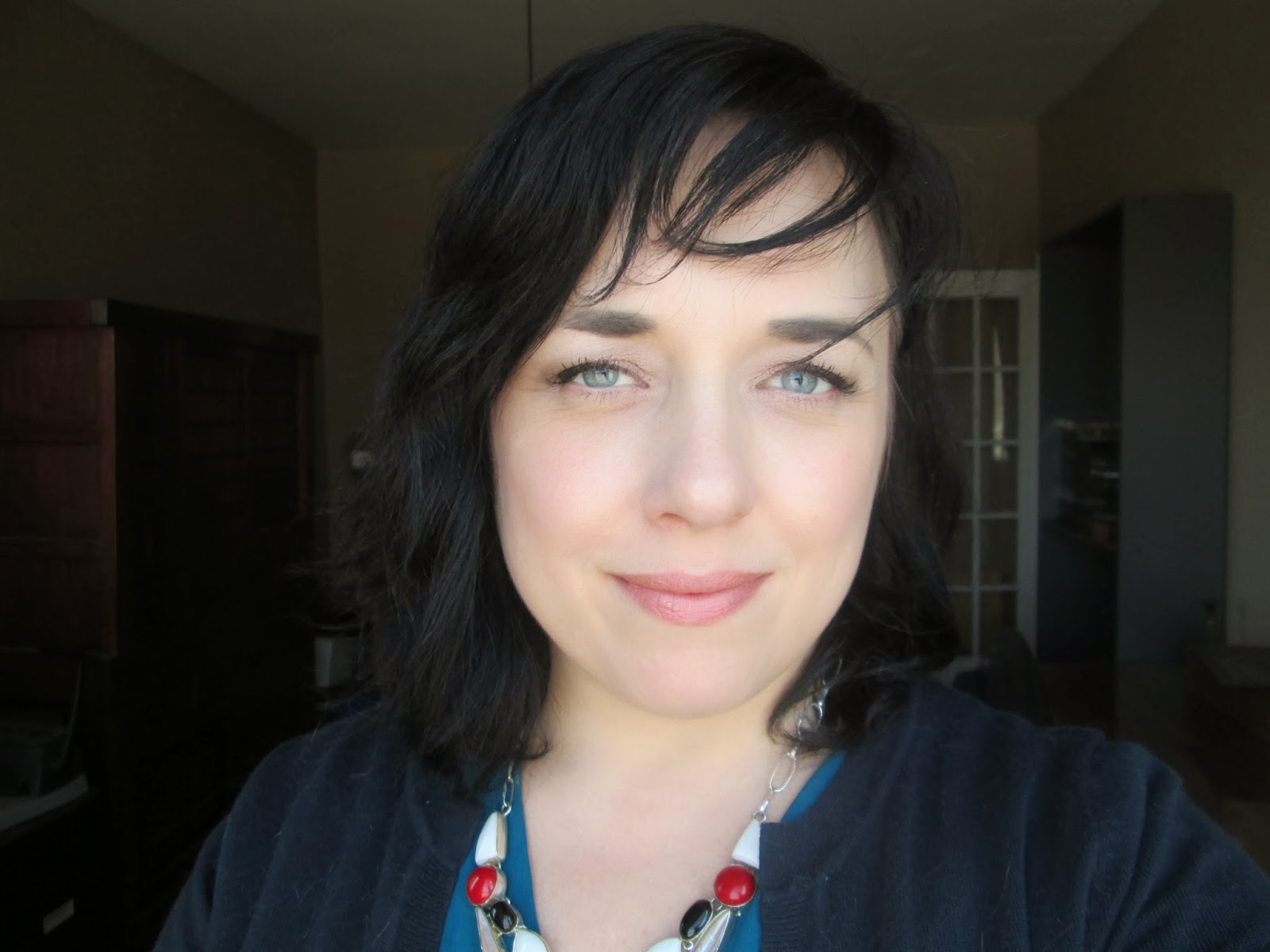 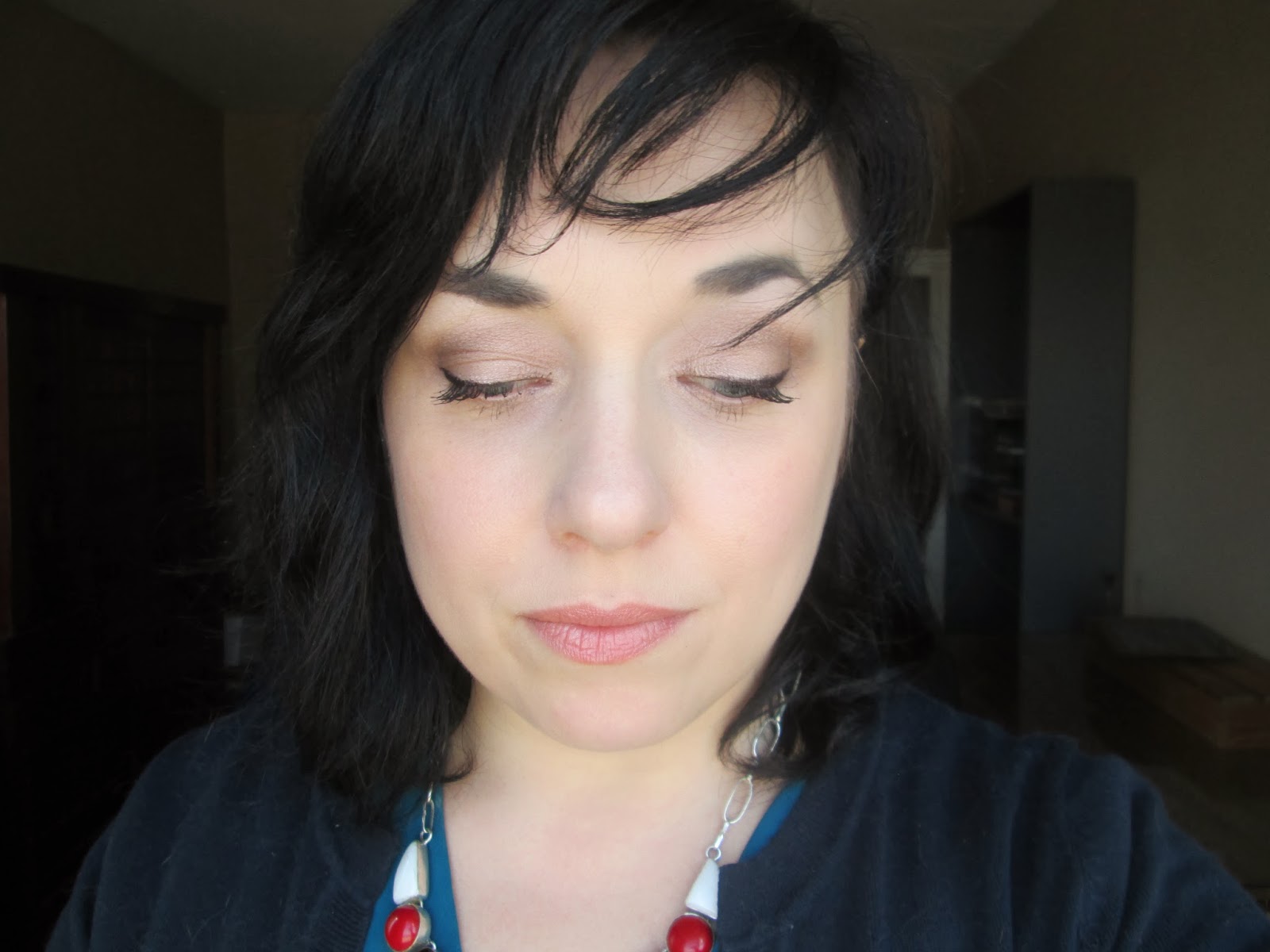 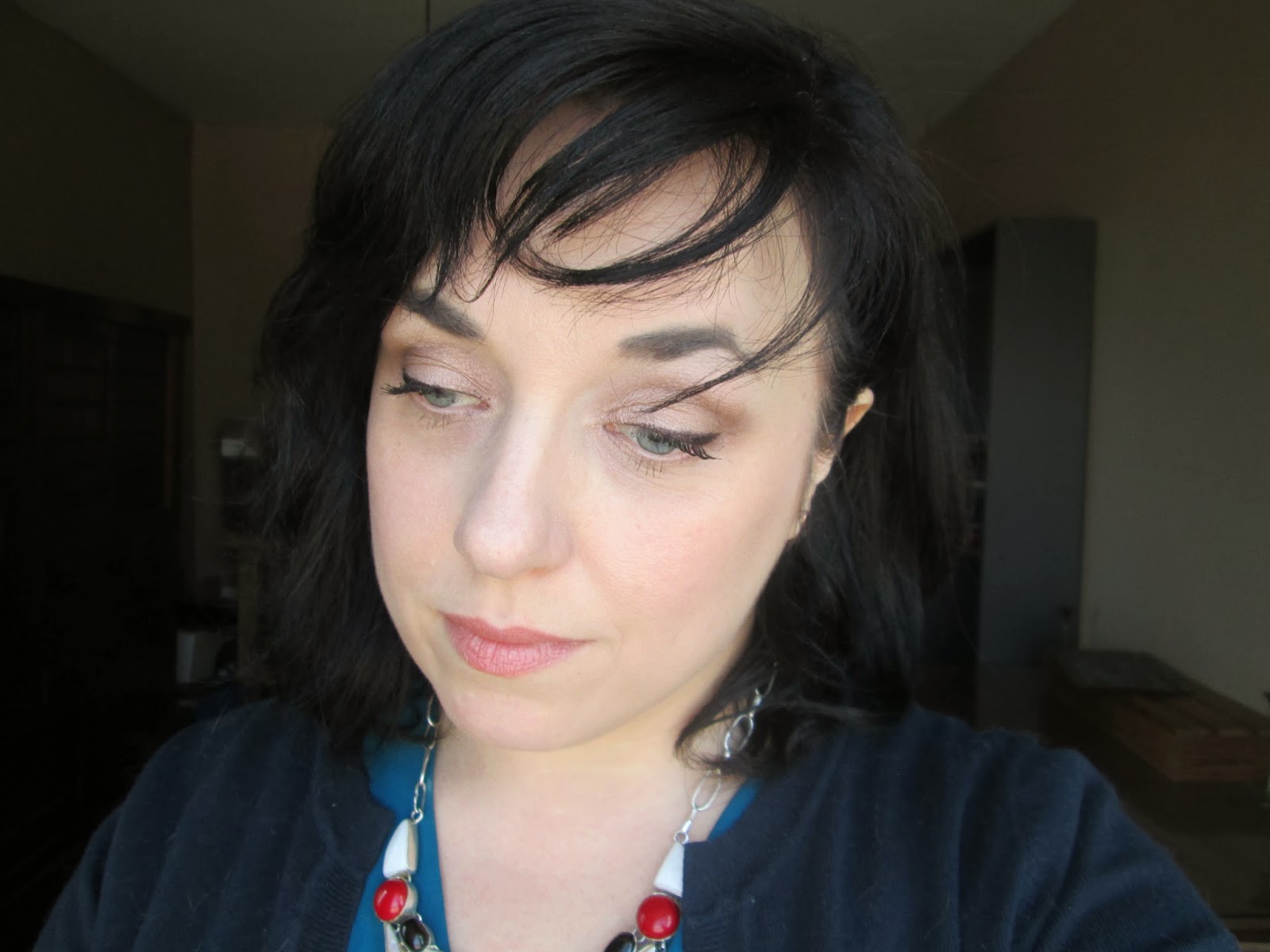 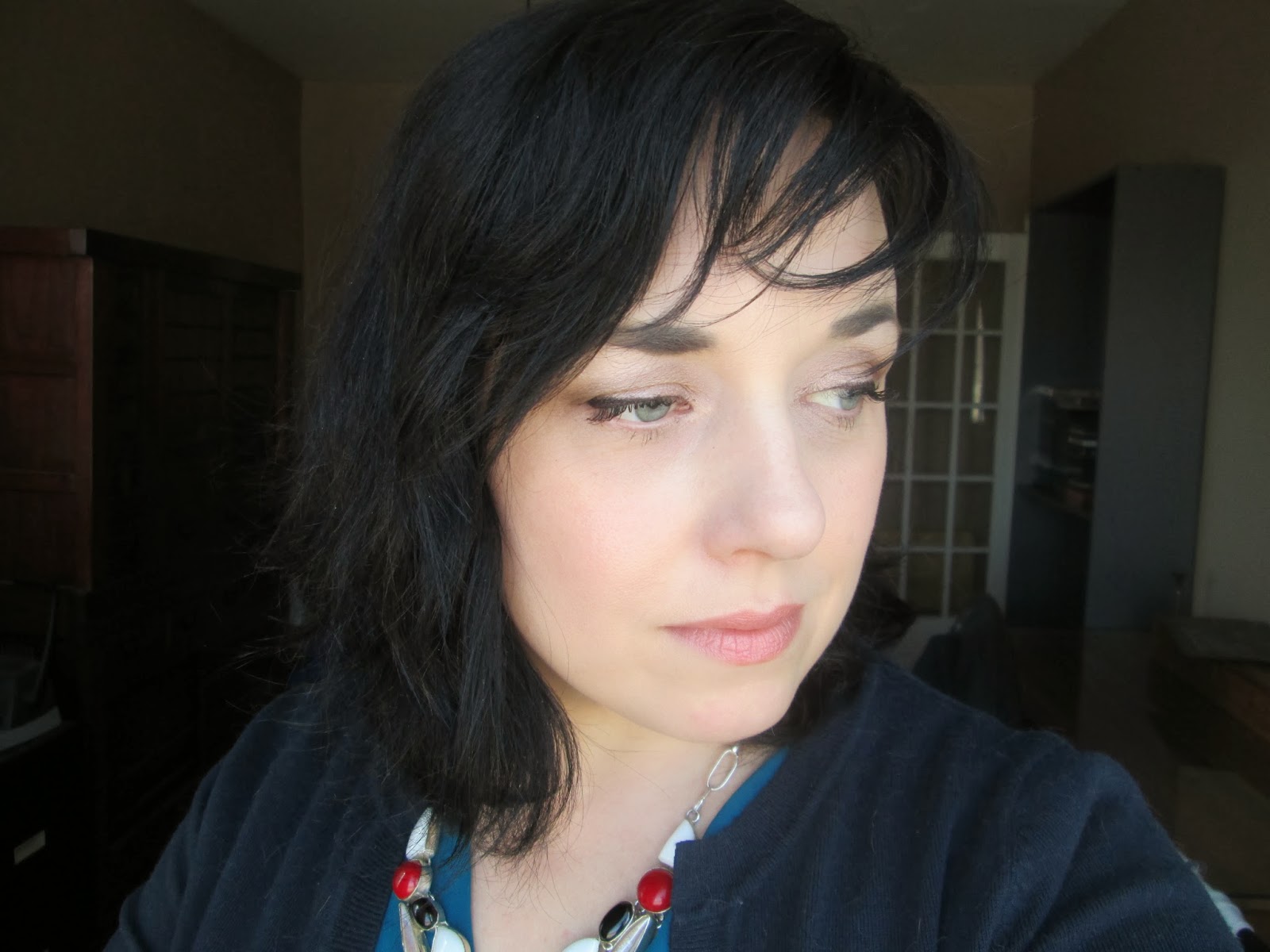 i'll have to eschew the process of listing everything else that i'm wearing because, um, i kinda forgot to write it down. but really, the important thing is how soft and lovely the lip colour is and how uncannily well the two shadows go together. much like last year's pairing of "snowy egret" and "eclipse eagle", these two really should be bought as a pair, because as wonderful as each one is, the combination is more than the sum of its parts.

i can tell you that i'm wearing rouge bunny rouge's highlighting liquid in "sea of tranquility", the softest, lightest rose gold that gives an angelic radiance. i had already tried the formula in "sea of clouds", which is cooler and whiter. both are a dream to work with and, while i'm carefully rationing out the samples i have of each, i can see myself springing for both in the near future.

is this the last visit from the bunnies for a while? probably not. there is something absolutely addictive about the brand and once you've acquired a taste for it, you only want more, more, more... which reminds me, it's time for another disc of "breaking bad".