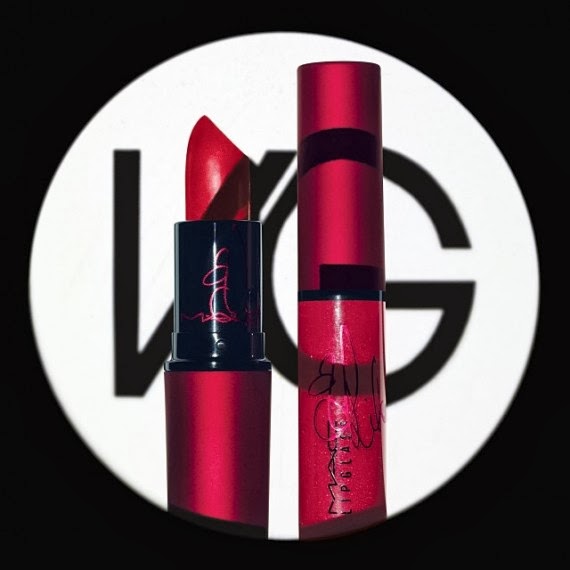 in the last few years, i've gone from being a mac super-fangirl to being a mac skeptic. their increasingly sub-par collections and their deliberately restricted stock on limited items have made the experience of buying from them frustrating to say the least. but i have to salute them for their continued dedication to the cause of eliminating aids and promoting education and safety to control its spread. every year, mac introduces new products- generally a lipstick and a lip gloss- with a celebrity spokesperson to raise money for the campaign and every penny that's raised goes towards the cause.

the shades have ranged from the nearly universal to the borderline wacky- last year's second collaboration with rapper nicki minaj was a white-based lavender that looked beautiful in the tube, but was extraordinarily difficult for most complexions to pull off without calling a lot of attention. [hey, sometimes that's what you want.] my personal favourite has always been "viva glam v", a light neutral pink with gold shimmer that's just a perfect everyday shade.

the first six iterations of viva glam lipstick are part of the mac permanent collections. all the ones done since have been produced for a year, then discontinued forever. all of those bear the name of the spokesperson associated with them, including minaj, cyndi lauper, lady gaga, rupaul [who was also the original campaign model] and now rihanna.

for those of you who missed it, rihanna has already collaborated with mac on several collections that bore her name last year. those collections were popular, exceedingly so, but also raised a lot of ill will among mac fans because of low stock availability, "waiting rooms" for online purchases and sometimes questionable quality. this time, however, there are no such problems. the lipstick and gloss are and will be available, with stores expected to carry stock until next february.

SEE SWATCHES AND A LOOK AFTER THE BREAK...

despite my increasing fed-up-ittude with the brand and their marketing, i do quietly cheer when they get one right. and the new "viva glam rihanna" lipstick is very, very right. it's a neutral red with gold shimmer that pulls it a little warm [although it photographs cooler]. it's listed as a frost finish, but the shimmer particles are exceptionally fine, far more so than the usual frosts you see. it lends more of a quiet luminosity to the shade, rather than a visible sparkle. [note, this was incredibly difficult to photograph.]

the formula has mac's signature vanilla scent, which i've always loved, as well as a whiff of something like cocoa butter. in recent years, mac has truly perfected a smooth, velvety, low-sheen matte formula and this one seems similar, just with the addition of that superfine shimmer. it's perfectly even and opaque after a single pass, lasts well and doesn't dry my lips at all. in fact, my lips feel just fine after wearing it, which is rare for a formula with so little slip.

of the shades i have, the limited edition mac "heartless" is a touch cooler and brighter and has no shimmer. guerlain "gardner" is warmer and browner. i honestly don't think i've ever seen a red that combines this richness of pigment with a lovely ripple of gold.

here's a look at the shade in action, which was an excuse for me to pull out some of my mac pigments as well. 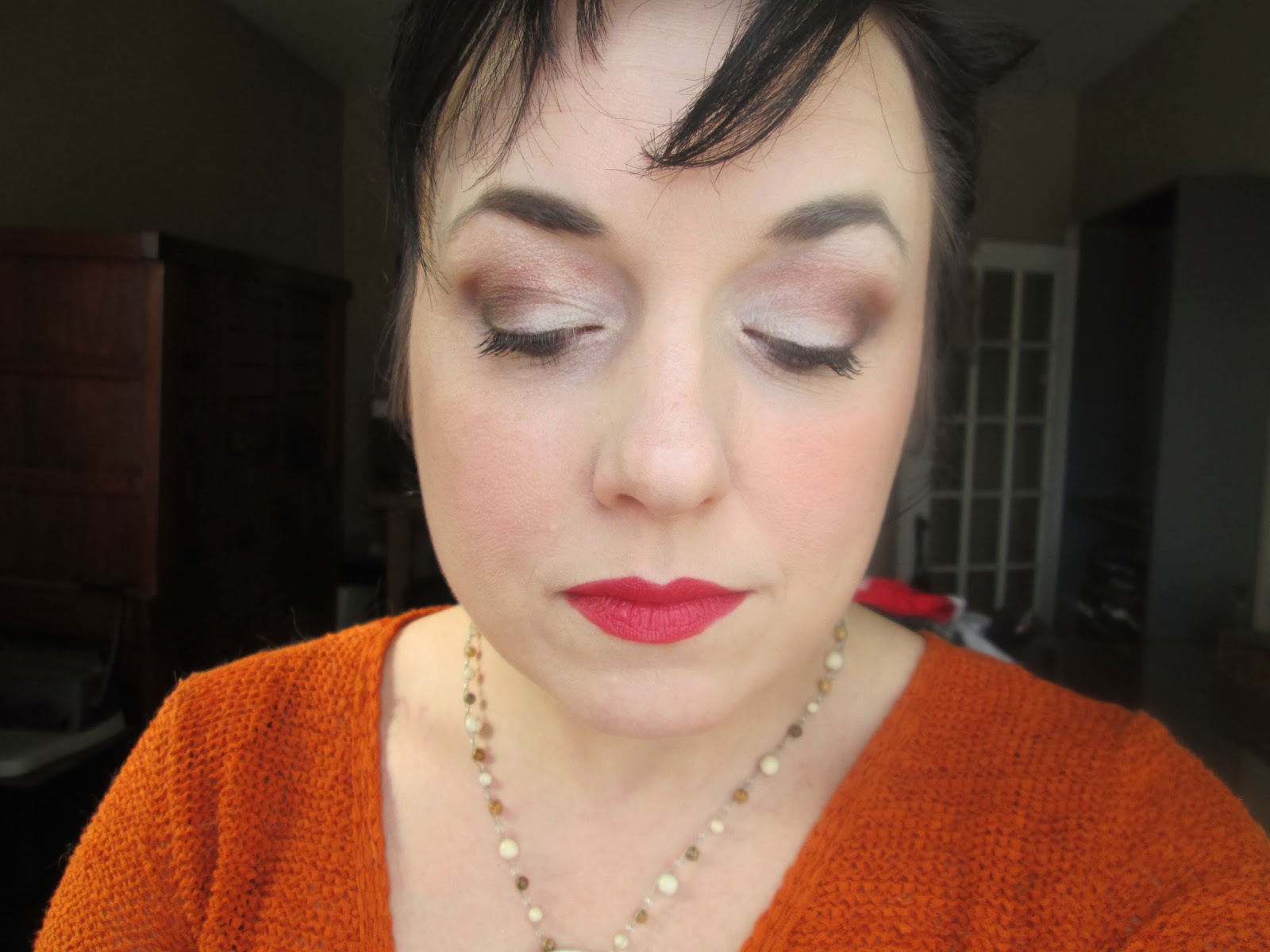 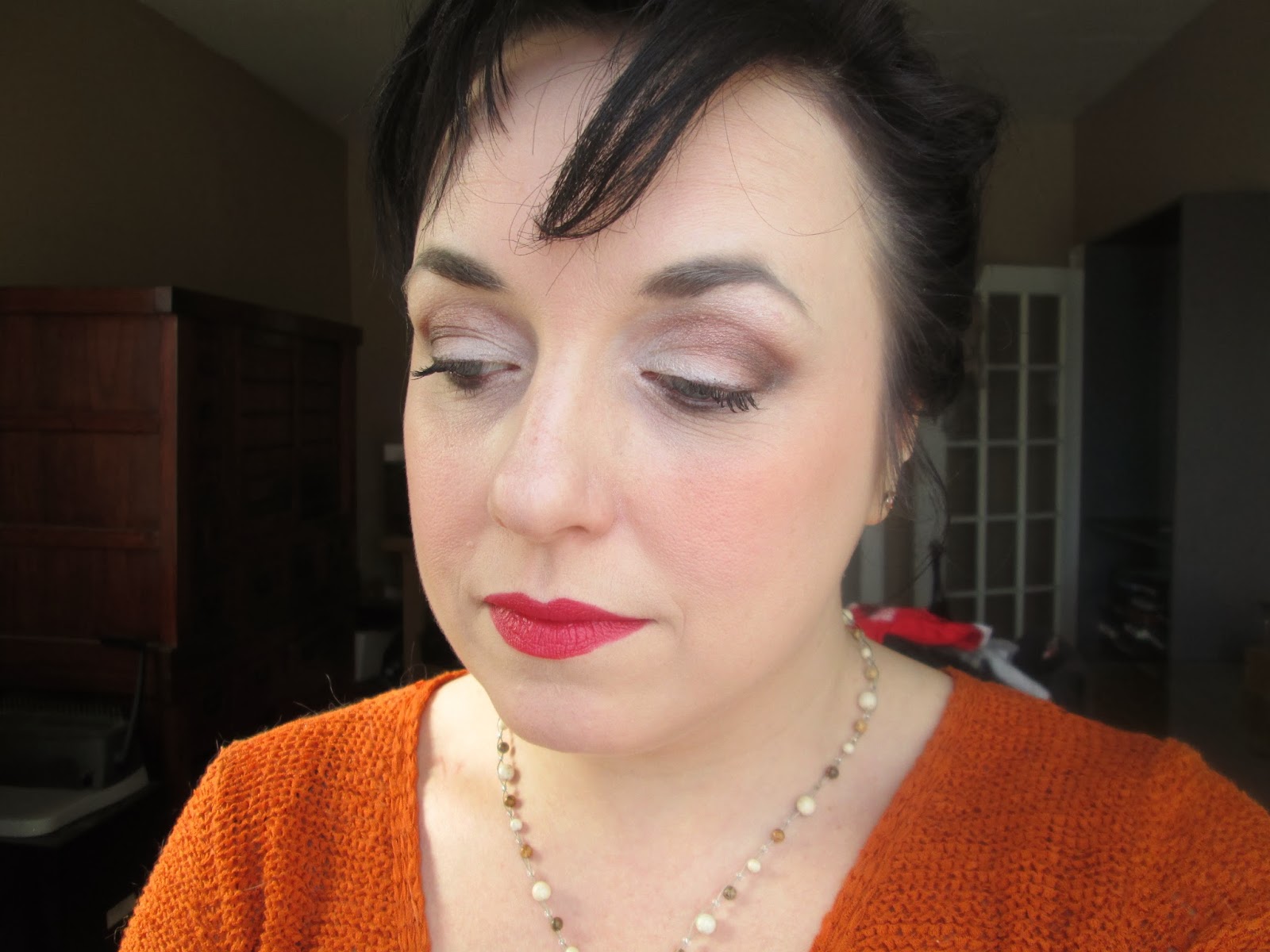 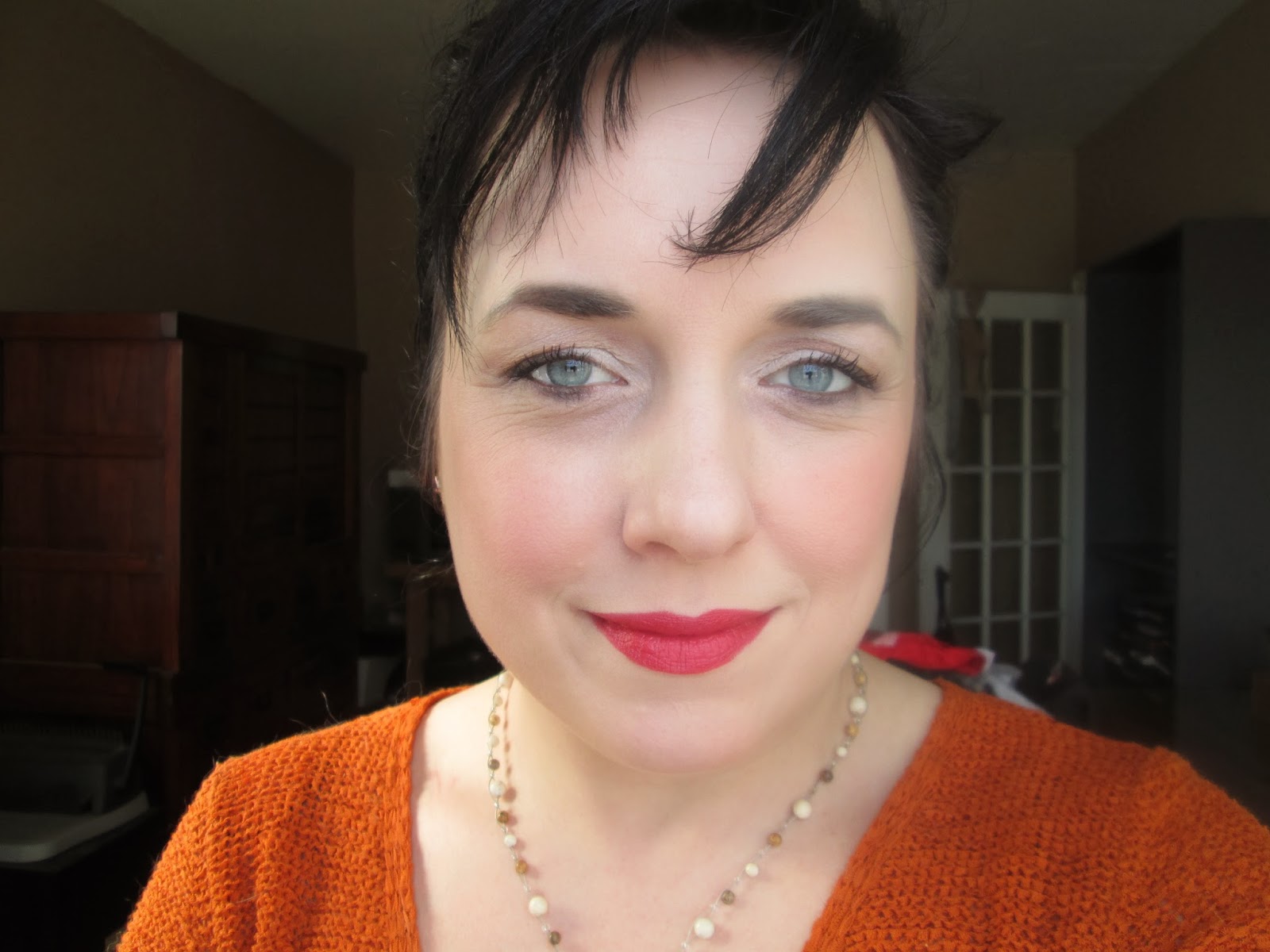 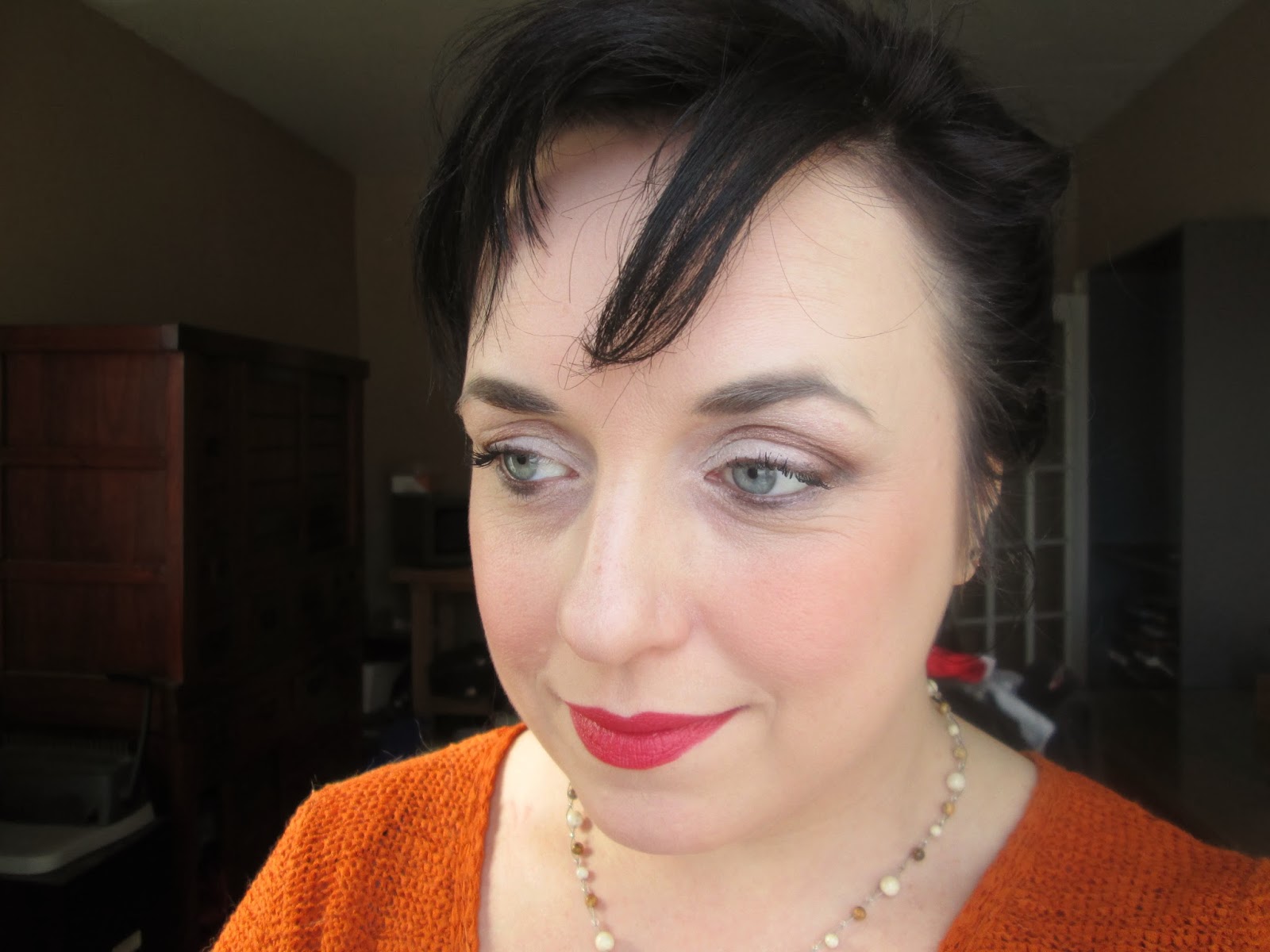 *suggested alternates :: bloodline = urban decay "darkside" [more shimmery; "bloodline" is a hard shade to match, because it's dark and has a slight purple shift to it; for this look, i think you could use any dark brown shadow and get the same effect]

i tried something a little different with my eyes for this look, since i've been wanting to experiment more with shadow placement and the ability to shape the eye. i tight-lined my upper lid and dusted a little "bloodline along the upper lash line. on the lower lid, i did the same, but only in the centre. on either side, i used "dazzlelight" to brighten the lash line. by creating a bit of a vertical cross, i was thinking it would make my eyes look rounder, but dom noticed the difference and said [without my prompting] that it made my eyes look asian. i guess that still counts as a new sort of look. i think it's possible that this was a bit of a failure, though, because the liner from my upper lids smudged onto my lowers and sort of killed the "sidelights". nonetheless, this post is about the lipstick and that looks just fabulous.

"viva glam rihanna" is available at all mac locations and counters- and it is actually available- as well as on line.

Lani said…
This looks gorgeous on you, Kate! I've ordered this too, can't wait til it arrives.
5:37 AM