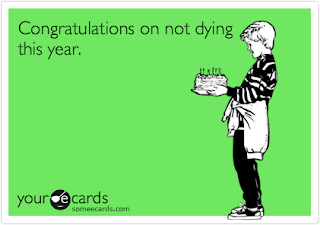 if you're reading this, congratulations, you're ALIVE! that's actually an accomplishment, since several the holiday season is actually the deadliest time of year [thanks a lot drunk drivers and high-fat dinners]. so if you're alive now, the odds are slightly higher in favour of your surviving for almost another year.
studies have shown that

of course, if you've been living in the corner of the world where i am, or really anywhere in the extended neighbourhood, chances are that you've thought death would be an improvement at least once already this year. yes, it's cold. and i know everyone says that, but i really mean it. it's deathly cold over a great swath of canada and the united states, enough that our brains have frozen up and are unable to contemplate anything other than how extremely cold and miserable it is. you've heard the comparisons about how parts of canada have been colder than mars. [winnipeg has been the measuring stick, but honestly, it's been about the same temperature from the prairies all the way out to the east coast, which is in itself news-worthy] in truth, we've only been as cold as the equatorial part of mars, so the comparison wouldn't be totally apt unless you were referring to rio or lagos hitting -35C. nonetheless, when your measuring stick for cold is located several million kilometres further away from the sun, suffice it to say that what you're talking about is pretty extreme.

what's worse is that there's also been significant snowfall. while a lot of businesses have reopened along the eastern seaboard, a lot of simply announced that they weren't going to risk it. for those of you not familiar with canadian winter [yes, many of us go through this every year], nature is usually polite enough to give you a choice: either it's killer cold or it snows. seriously, you will hear people say without irony that they wish it would warm up enough to snow. that's the usual bargain, but this year, apparently fed up with our louche environmental ways, nature apparently decided it was time for a little "up yours" to one of the planet's most active regions.

i would also like to point out that this is particularly frustrating for those of us in canada, for whom this is actually the second winter wave of brutal cold and heavy snow this winter. well, not even this winter, because the first wave came before the season had officially changed. normally, we get through these things by telling ourselves "it's really just a few weeks" and getting our doctors to increase our medication, but when winter unexpectedly kicked our backsides in late november/ early december, the seasonal deal was clearly off. no we're shivering in our huts, with literally no idea if spring will come or if we've entered a new ice age with very little warning.

checking the trusty farmer's almanac, it says that we here in canada, at least my area of it, should expect a winter that's mild and wet. we've had the wet, can we please get the mild?

but to circle back to the positive, we're all still here. and that's a sort of accomplishment.

i've been taking some time in the last couple of days to review some of the most popular posts from the last year on more like space [while snugly wrapped in blankets and usually a couple of cats]. i do this on a regular basis anyway, but the change of calendar year seems as good a time as any to think about what changes i want to make.

i'm consistently surprised at how the many disparate parts of the blog seem to have their followers. i'm especially surprised since this violates one of the simplest rules of blogging: choose a subject and stick to it. i have never had the least intention of operating "more like space" in that way. it was always intended to be a random sounding board and, wherever possible, a conversation, the kind you would have with good friends over cups of coffee or glasses of wine, the kind that weaves all sorts of shared interests together in different ways. that format is never going to change, so if you like certain sections of the blog more than others, please bear with me.

i do plan on continuing to tag related posts so that they're easy to identify/ find- the two clear examples of that being "making faces" [beauty posts] and "mental health mondays". the latter made its return this year, to the point where it's become almost weekly again. i'm hoping that the first part of 2014 sees that word "almost" disappear. the issue there is always trying to find enough time to research a subject, without getting bogged down and turning into a biochemistry term paper.

two other regular segments- "friday favourites" and playlist posts- have fallen by the wayside. the latter is, of course, because i haven't been doing a regular dj gig, but i continue to toy with the idea of podcasts, most likely themed ones. we shall see what's become of that.

"friday favourites" has had a tendency to ebb and flow a bit in the past. i feel like i need to re-format this to keep it fresh, or to think of a new approach, or scrap it entirely. stay tuned.

i was interested to note that among the beauty posts i've done, those organised around a theme are generally as popular as those which are simply straight reviews. i prefer writing the former, but the latter is easier to do, so i would say that you should expect things to continue pretty much as they are. the minimal daylight means that it's harder for me to do swatches, a problem for which i have found no viable solution.

this year, i also got inspired to look into seasonal colour analysis [thanks largely to the adventures of the everyday beauty and london makeup girl in this domain]. this in turn inspired me to think differently about how i "put myself together" both in terms of makeup and clothing. back in october, for the first time, i did a post dedicated solely to things i like to wear and, wouldn't you know it, it was the most read post for the entire year. although i generally am always rushing enough that i'm lucky if i remember to put on pants before leaving the house [sorry, neighbours], this does make me think that it might be worth exploring on a more frequent basis.

two other loves of mine that i'd love to start incorporating more often in this space are reading- for possibly the first time ever, i made a sort of resolution, to read more, since i feel like that lapsed during the year- and cooking. since 2014 is a world cup year, i would anticipate the return of eat the cup, of course, but i'd also like to include it more in general.

hm. kind of sounds like i'm promising more of the same and more of more. and i'm supposed to make time to get my own writing done in this time frame. and, you know, work days.

i don't know how much of what i want to accomplish will actually come to bear. none of us do, which is perhaps what's so magical about this time of year. we have yet to waste an opportunity, or mess something up, or disappoint ourselves. everything is possible, even if nothing is probable. i meant that to sound much more uplifting than it actually does.

at the very least, eventually things will thaw. even that would make a pretty substantial improvement.

thanks for sticking with me another year and by all means, if there's more [or less] of something you'd like to see on "more like space", please feel free to let me know. here's to a happy 2014 for all of us.