January 30, 2014
one of the things that i consistently read about wearing makeup is that you should stick to neutrals at the office. to that i say: pshaw. [which, interestingly, is still accepted as a word by spellcheck even though it hasn't been used since long before the advent of spellcheck.]

i mean, i understand. i know you don't want to be the girl [or boy] who gets known for having the interesting makeup in the office, because then that kind of defines who you are, so that you can never be the smart one, or the creative one, or the one to go to in a crisis. trust me, i did a stint as "the one with the cool clothing" in the office. that's a synonym for "the one whose opinion is never taken seriously".

but that doesn't mean we have to consign ourselves to neutral neverland! [although, actually, i really love neutrals. but that's another blog post.]

i say, onward ladies [or gents, if you're bold] who want to spice things up a little! furthermore, i truly believe that there are perfectly acceptable ways to cheat in a little colour in the everyday. here are a couple of things i've tried... 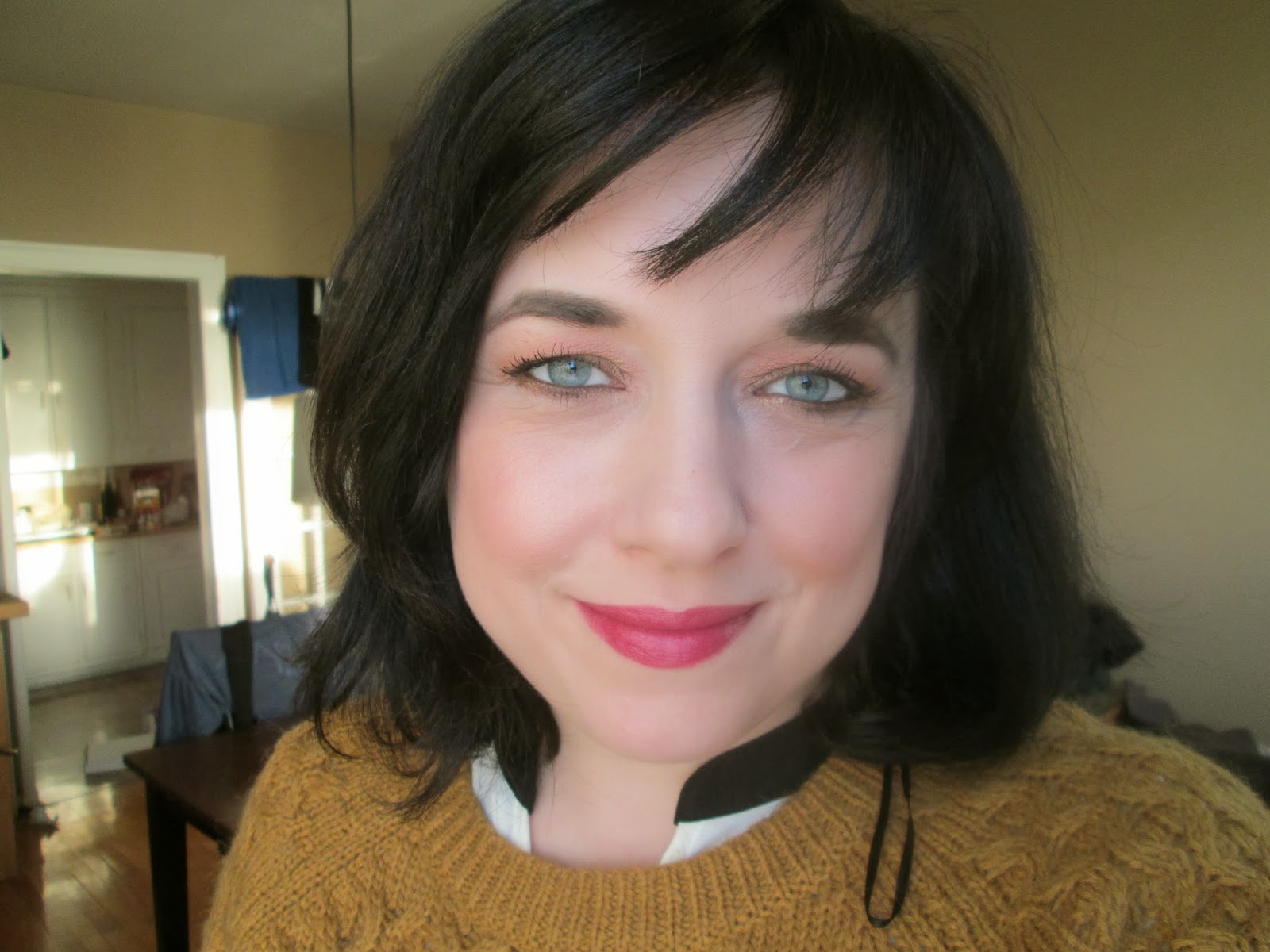 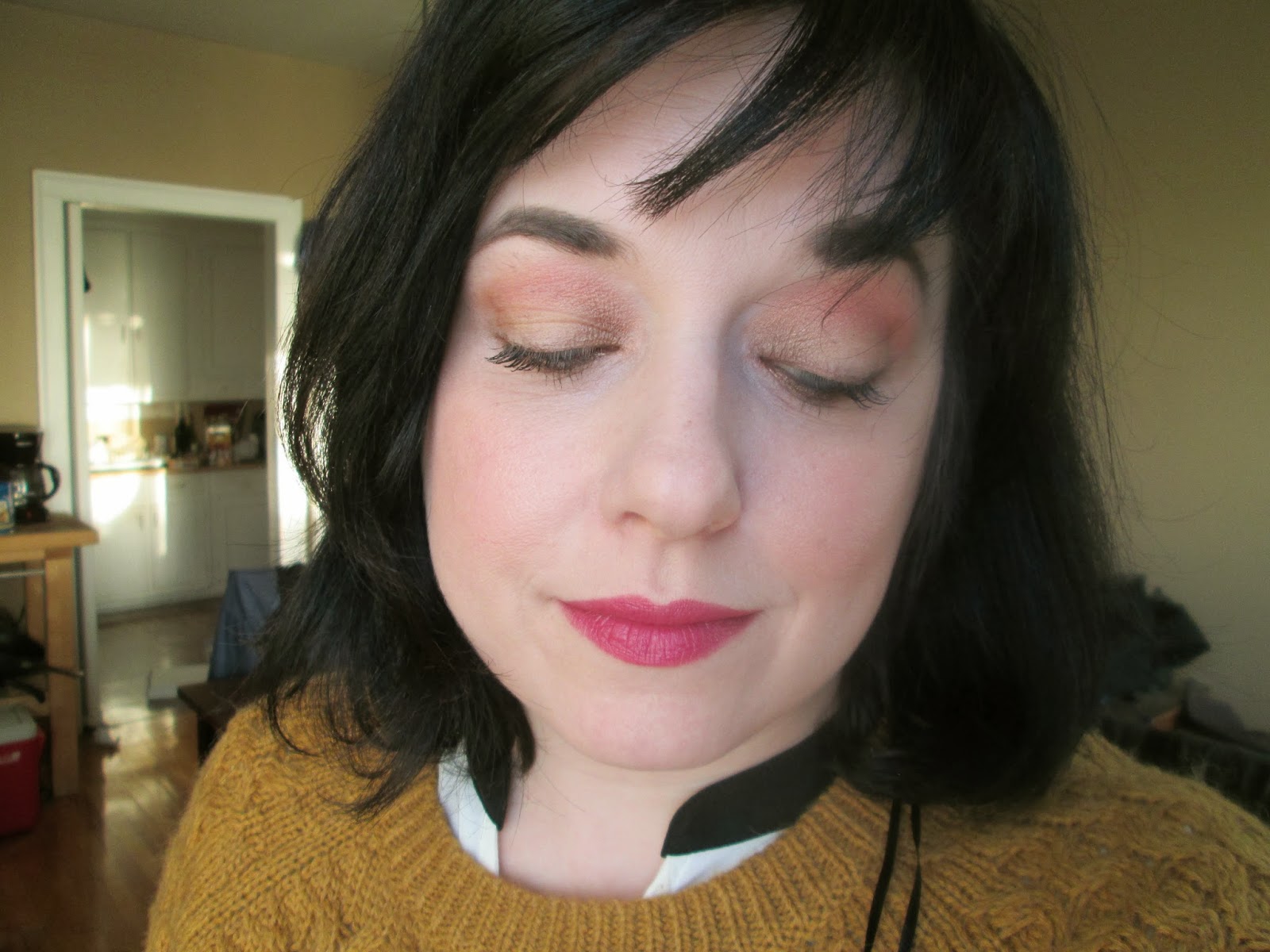 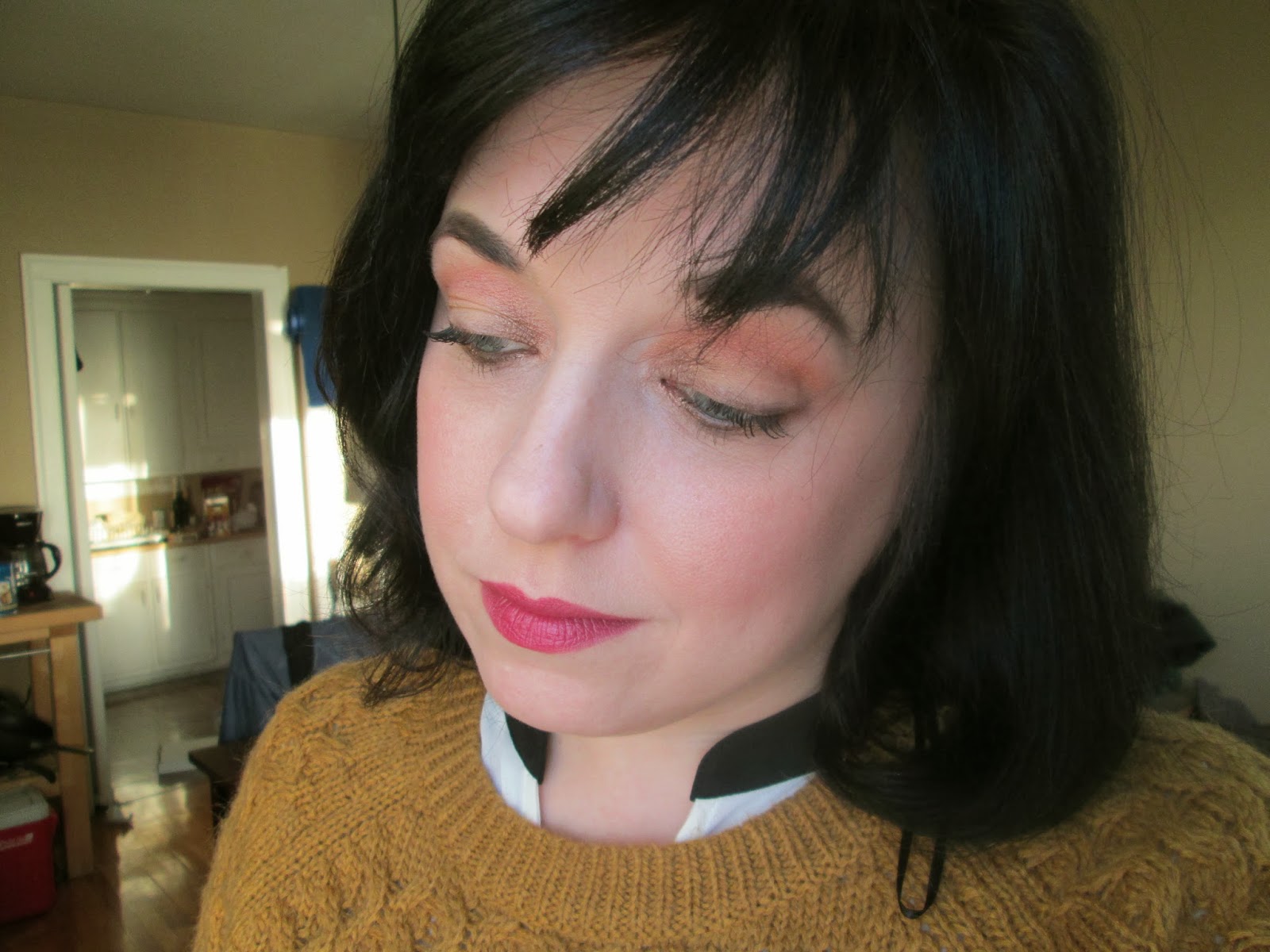 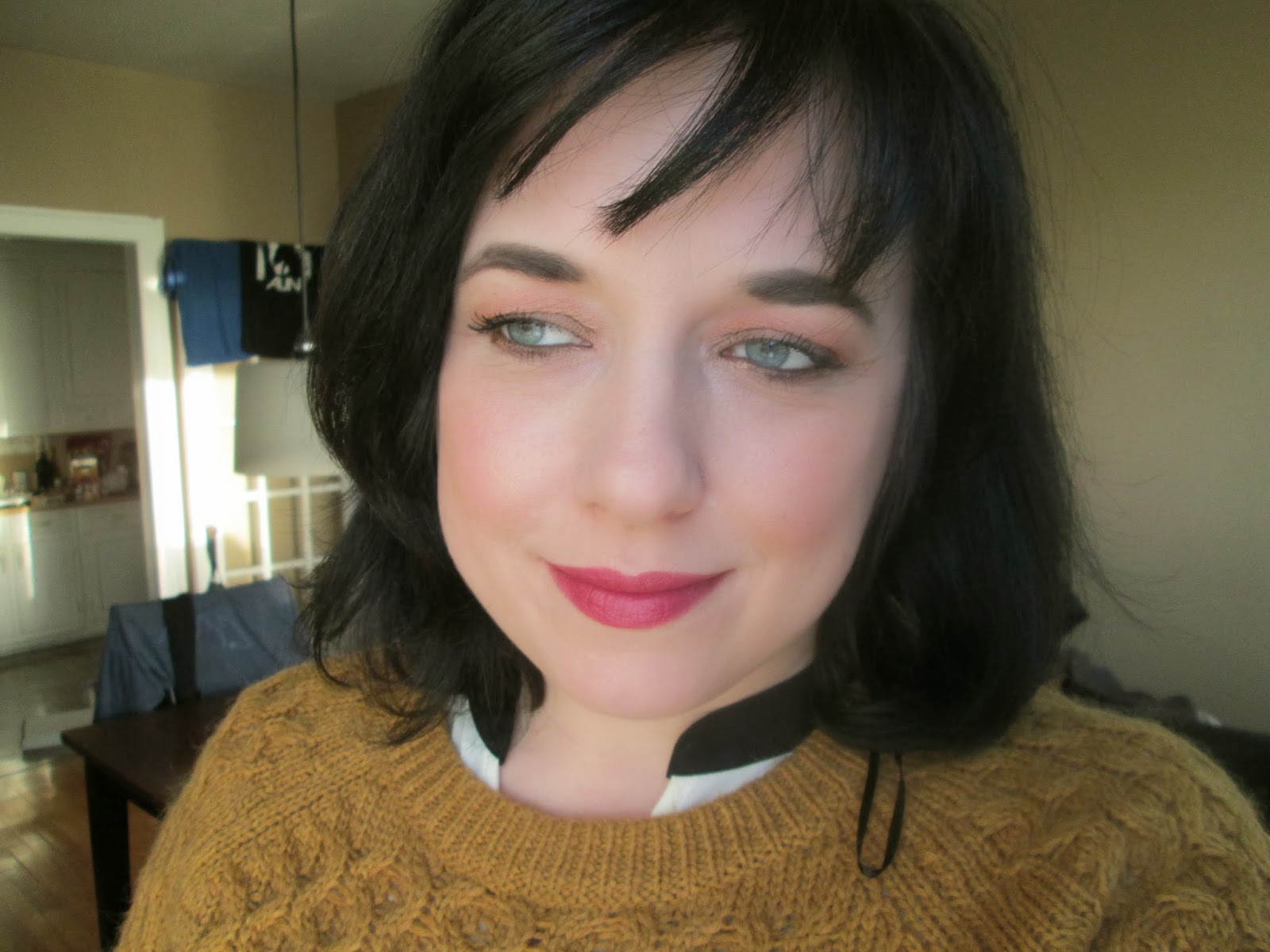 it's actually pretty easy to hide colour on your eyes. you can pop it onto the lid. or in the crease. or blend it into the outer corners.

in this case, i just took a predominantly neutral eye look and spiced it up a bit by adding a bit of coral along the upper crease/ lower brow bone area. the neutrals come courtesy of marc jacobs icon 3-shadow palette in "the glam". i need to review that one, darn it. the coral is taken from guerlain's "coup de foudre" palette. or "les fauves", if you prefer. [it's the exact same coral.]

i used urban decay "desperation" to make a nice, sharp line along the lower water line, to keep my eyes looking their brightest. i also find that having a distinct frame for the eyes keeps the coral from turning my eyes into red and puffy pits of dooooooooommmmm. that's not a good look for anybody. [pause for a neutral moment- "desperation" is an absolute necessity. it's a true neutral brown that works with anything. it's cool, so it won't add redness, dark enough to work as a definer and yet it's not as razor-sharp as pure black. ok, back to colour.]

on my cheeks is a mix of mac "my paradise", a stunning golden orange that still has most of the overspray it came with, i'm ashamed to say, and hourglass ambient lighting powder "incandescent light", the one shade unique to the limited edition ambient lighting palette that came out for the holidays. i liked the contrast of a warm tangerine-with-golden-shimmer and a cool pink-white over top. i don't know how much of the effect was actually evident, but i knew, dammit. 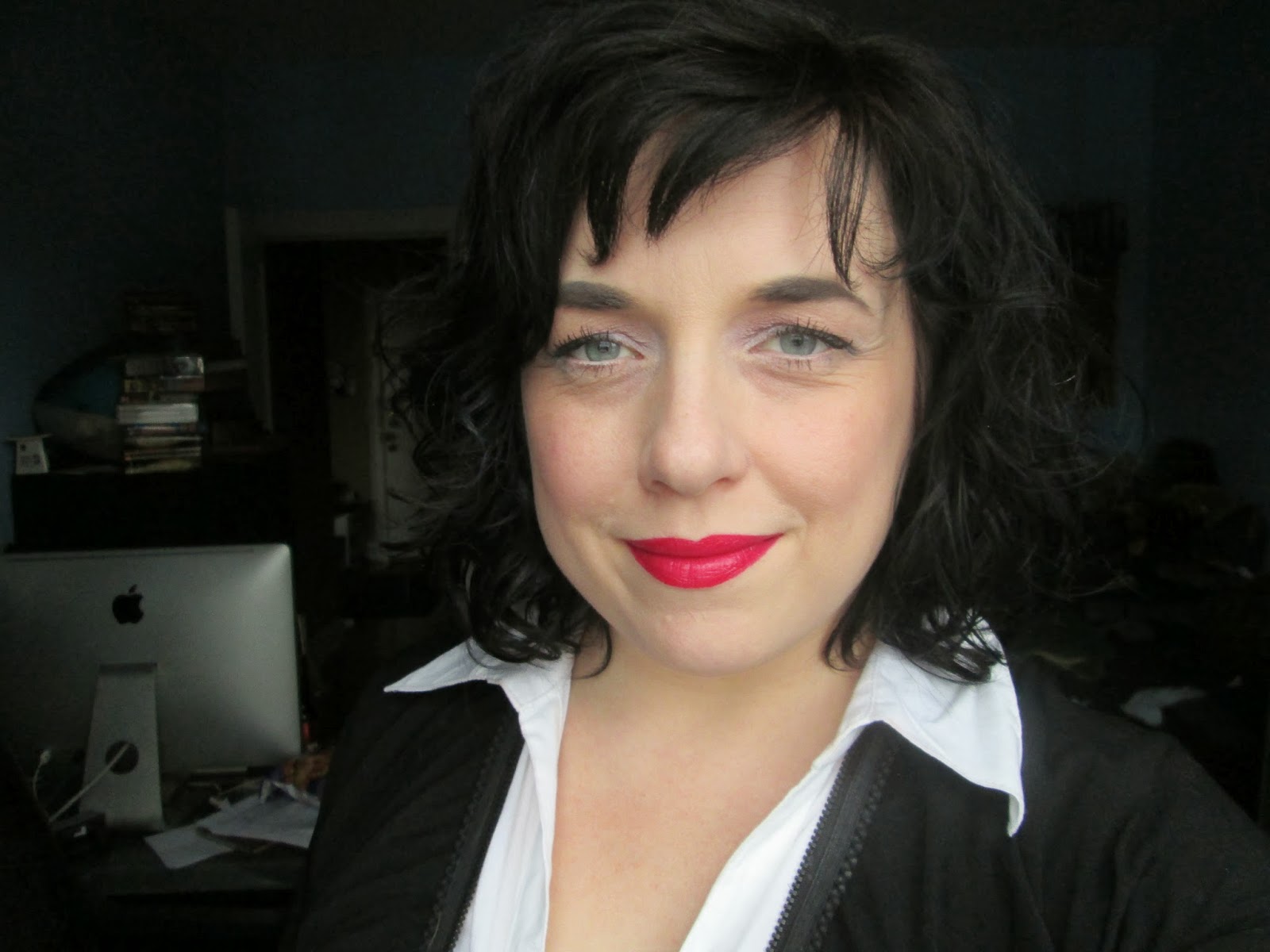 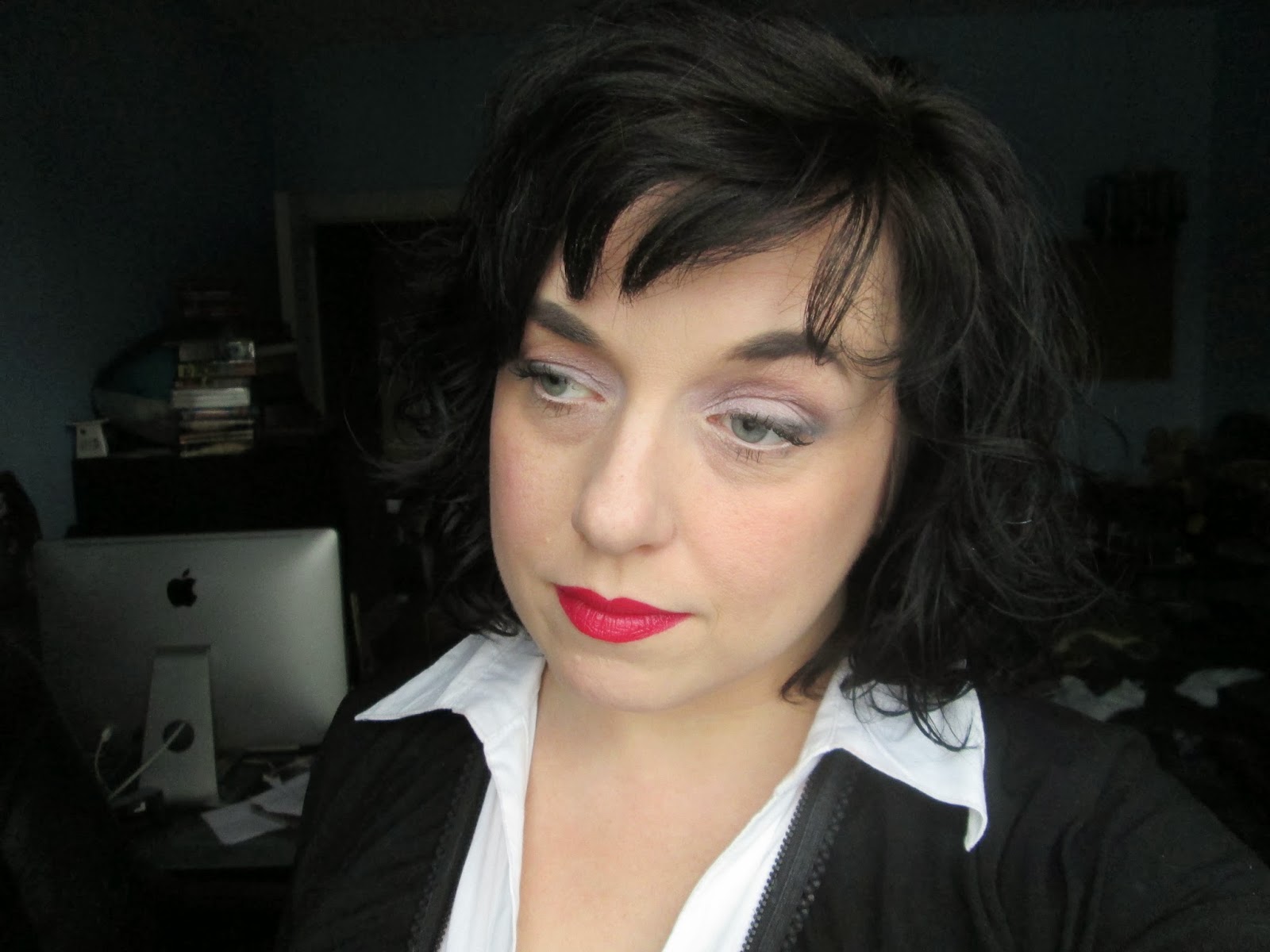 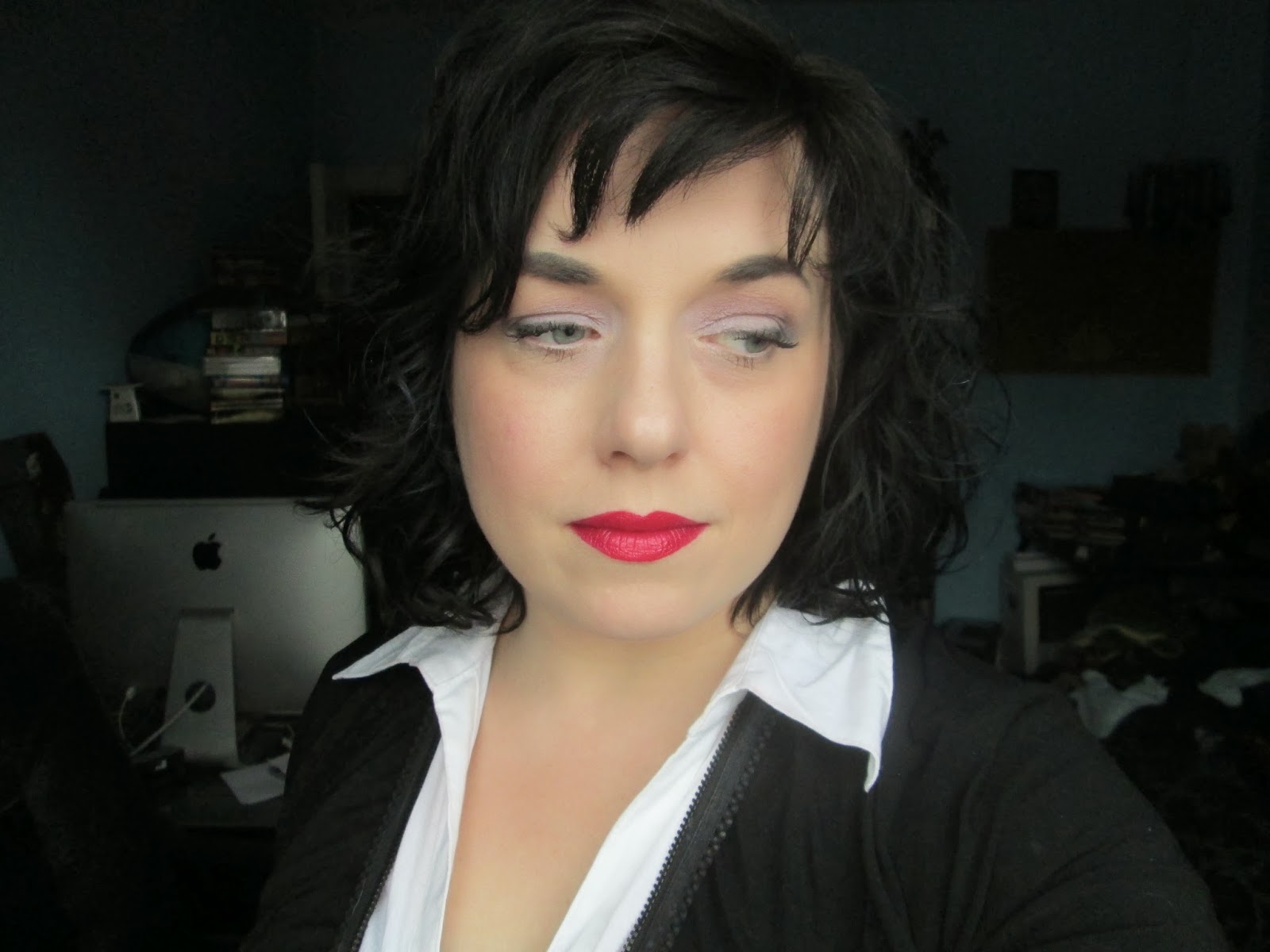 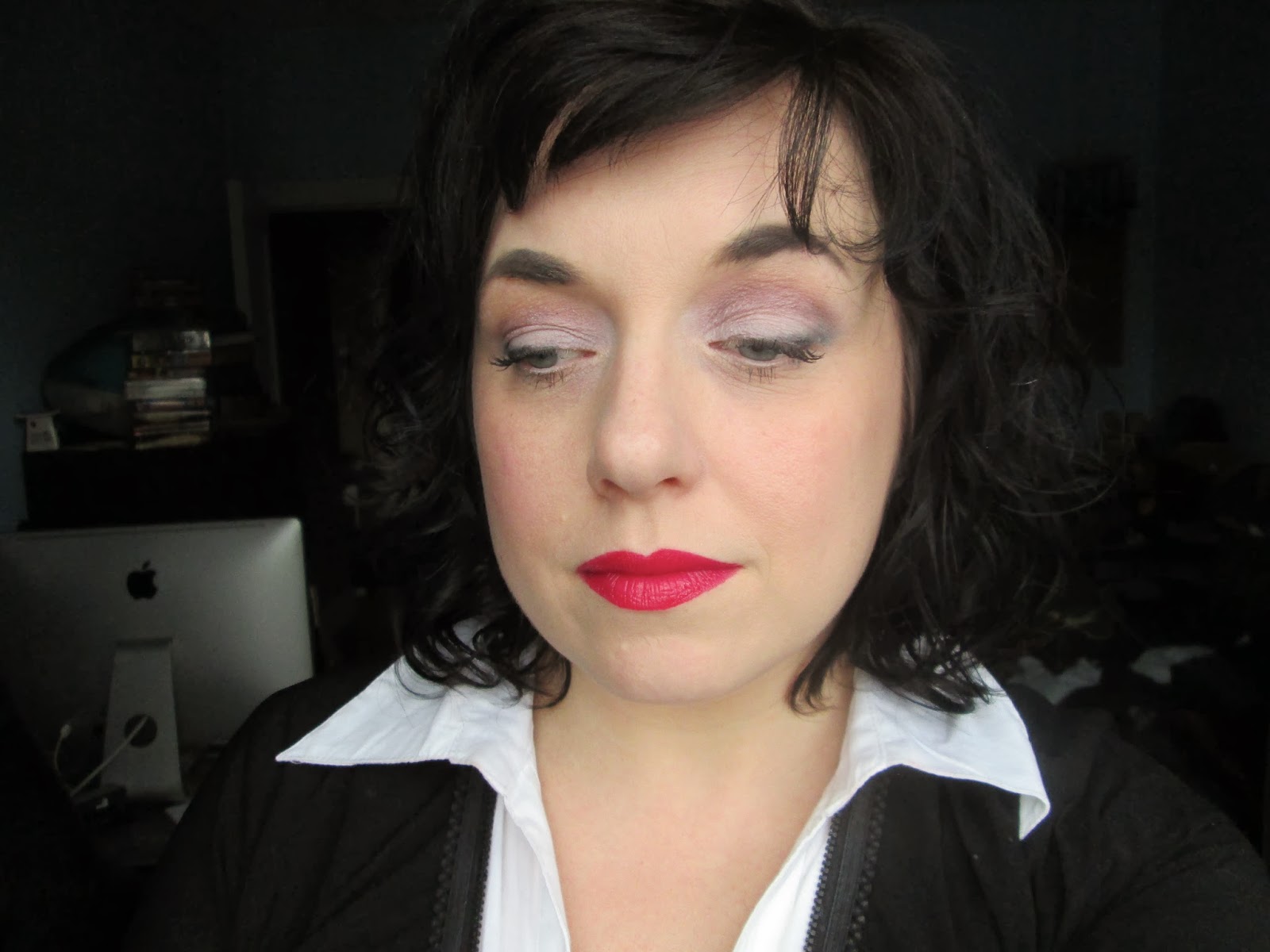 i know, it's not exactly revolutionary, especially on my blog, but come on, there is something so... authoritative about a red lip. and it's perfectly office-appropriate, when you pair it with the right accessories. the right accessories in this case being equally sharp black and white as clothing. seriously, the only thing reining this lip in even a bit is the fact that you have such a contrast going on underneath my chin. black + white + red = perfect balance and perfect tension.

i'm not even going to try distracting you with the eye makeup first, i'm just going to go straight for the lip, which is guerlain rouge automatique in "liu". it's an incredible cherry red, as cool a red as you can get without crossing the border into pink. what can you say besides that? red! red! red! despite it's [very] subtle translucency, the pigment in this little baby is intense enough that it's not going to vary a lot based on your underlying lip colour. it's pretty much just going to be itself.

of course, you can't just wear something like that on its own, because that would be weird. so i paired it with a very subtle, but still coloured, eye. the majority of the colour comes from dior's "celeste". this look was done the week that the people who live in the ceiling descended on my office and tracked their dust thither and non, which means that my eyes were supremely irritated. i'd say "celeste" does a decent job of obscuring the damage. i did blend it with chanel "hasard" and "fauve" in the crease, to give a bit more shape to my eye. and i smudged urban decay's dark, cool grey "smoke" along my upper lash lines.

i don't smudge often, at least not on purpose. i kinda like how it turned out [adds another technique to cosmetic arsenal].

i did want a dash of pronounced colour for the cheeks, so i turned to mac "salsarose" as i often do and topped it [again] with "incandescent light", so that it wasn't too outspoken for the office [that's my job].

so that's a couple of ideas. i had planned this whole week of "colourful looks in the office" until i realised that i am in too much of a rush in the mornings to take photos of myself most of the time, no matter how well i planned everything out. but this at least shows you a couple of attempts i made, when i was slightly ahead of schedule.

oh, and i couldn't very well not share this one last photo... 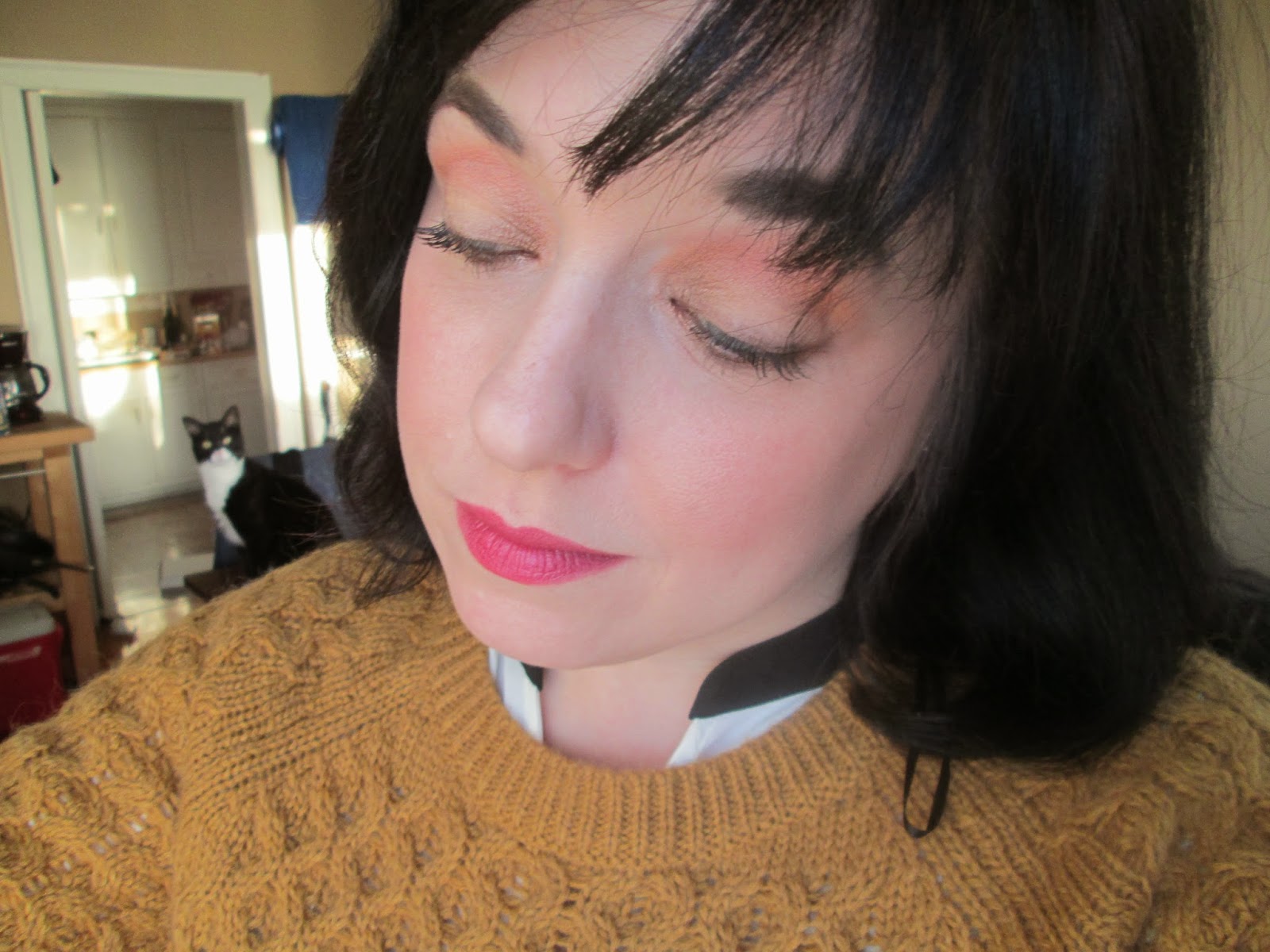 everyone wants to get in on the act.