December 08, 2013
there's no denying that the holiday season is upon us. i was in the drug store today and while i was waiting for a prescription to be filled, there was a quebecois country hoedown version of "jingle bells" playing and i was consumed with the urge to set things on fire. i always like to take a moment every holiday season to consider the poor sales associates who are forced to work day in and day out with the most insipid holiday music in their ears all the time. they are truly the heroes of xmas.

but even i'm drawn to overcome my seasonal avoidance syndrome enough to risk venturing out to the retail environment when i don't have to in order to try out the season's makeup collections. and none tempts me more each year than guerlain.

after last year's operatically themed "liu" collection, the company has gone in another direction for this year's "crazy paris". everything is touched with neon, including the packaging, which is black [rather than silver or gold] and features highlights of either fluorescent orange or pink or, in the case of some of the compacts, given a faux 3-d effect. reactions have been mixed, since the look is definitely a leap away from guerlain's normal high-class image, it's like watching a group of wealthy society ladies get tarted up to investigate the seamy scene around broadway and 42nd street in the late 70s/ early 80s.

personally, i sort of like that guerlain can show its wild side and i find the look in keeping with the colours offered. they're not at all typical holiday shades, at least not as far as the lipsticks are concerned. what you have there are three glowing, unnatural, almost eerie colours that command attention. again, whether or not you enjoy that is a question of personal taste. and anyone who knows my personal tastes knows that these will have been pretty irresistible to me.

there are two rouge automatiques and one rouge g included as part of the collection. all three are limited, but guerlain are at least reasonably generous with the stock they make available, so you shouldn't have too much trouble tracking them down.

first up, we have rouge automatique "illusion". it's a purple-berry base with a bit of a pink sheen and blue shimmer. the shimmer isn't visible from a distance, but it has a major impact on the final colour, making it cooler and brighter looking. the slight frost actually makes the colour look smoother on the lips, which is nice, because i find that the base colour tends to pull into my lip lines a little.

the blue shift from the sparkle is not overpowering, but it is visible. your lips will always seem to have a cool sheen and i suspect that the colour will be a no-go for women with very warm skin tones. that said, i sometimes have troubles with very cool lipsticks washing me out, but this one really seemed to hit the mark.

if i had one hesitation about this shade, it was that i thought i had a lot of colours like it, but as it turns out, the blue shift makes it much more original looking than i'd originally believed. chanel "fiction" is deeper and redder. guerlain "louling", from last year's holiday collection, has a similar, although slightly browner base colour and a lot of gold shimmer that makes it warmer looking on  the lips.

the second rouge automatique is "reflex", a real departure from the usual guerlain palette, a bright coral pink that's almost neon. this one is more like the regular r.a. formula, in that it's creamy and more opaque than "illusion". it does, however, have the same tendency to settle into lip lines, which is unfortunately a little more noticeable because there's no shimmer to hide it.

straight out of the tube, the colour is almost intimidating, because it's very bright, however it's certainly possible to wear it as more of a stain, where it shows as more of a warm pink. in fact, i find that the brightness of "reflex" fades fairly quickly [and not always evenly], so it might be better to apply it as a stain to begin with.

it is certainly a fun colour and distinct from a lot of other similar shades, because it's both lighter and more pink. dior "montmartre" is deeper and redder. lancome "corset" is more orange. it occurred to me afterward to compare it to mac "fusion pink", which is in the same family, but is darker and has a visible sheen. [you can see "fusion pink" in my "30 days of lips" set, on day twenty-four, or here.]

what i like about this shade is that it has enough pink and orange to work well with warm or cool skin tones and can be applied to work well with light or dark complexions. [darker complexions may want to apply in layers to ensure that the colour lasts a little longer.] i don't find that this is the best example of a guerlain formula, but it gets full points for originality and it'll easily transition to spring and summer.

finally, we have "provocative" rouge g. this is really the creme de la creme of lipstick formulas and "provocative" lives up to every bit of the hype. it's incredibly saturated, even, soft on lips, long-lasting and does have a nuanced finish that distinguishes it from other similar shades. i'm honestly stymied for things to say about rouge g's, because i've said the same about every one that i've ever purchased. if anything, the formula is getting better the longer it's around, but the true delight is in how consistent they've become. every shade in this range that's come out in the last year or so has been top of the line. only rouge d'armani rivals it in the ability to deliver excellence so reliably.

"provocative" is a hard shade not to love. if you're truly phobic about bright colours, you'll probably want to sidestep it, although the rouge g formula works fantastically well as a blotted stain. it's an intense red-pink [or pink-red, since it's truly on the border between the two] with no shimmer. it does have a very faint sheen that gives it a little extra glow, but it's really a creamy, full-impact kind of shade. it's more than muscular enough to work against even the darkest skin, but i also love it against my pale face, because it seems to just add life without being overwhelming. the balance of cool and warm tones is just perfect here. it won't clash with any level of warmth or coolness, i'm certain.

in terms of comparable colours, there are several, although i don't have an exact duplicate. mac "gesina" is redder and creamier. "madame batifole" from guerlain's fall collection, is cooler, pinker, a bit more muted [if you can think of "batifole" as a muted shade]. urban decay "catfight" is similar, but a bit darker and more matte. it's interesting, because the texture on these two is nearly the same, but because of that slight sheen on "provocative", you see a difference.

i belatedly thought of armani "402" as a point of comparison. it's in the ballpark, definitely, but it's cooler and redder.

guerlain really are putting a bold foot forward with these shades. they're offbeat for the french giant in different ways, which will probably divide their fan base a little. i don't think you're going to go wrong with any of them. if you're looking purely for quality, "provocative" is tops. for everyday wearability, "illusion" is your best bet. if you want originality, "reflex" is the way to go. but honestly, feel free to gather them all up and enjoy.

here's a quick look a "illusion" in action, plus a preview of future reviews if you look closely... 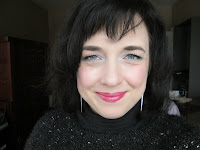 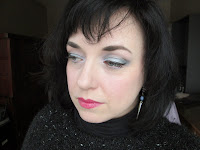 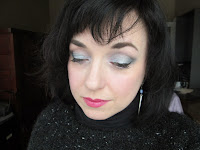 all three lipsticks are available at guerlain department store counters everywhere and in canada at shoppers drug mart and murale. sephora has other elements of the holiday collection, but none of the lipsticks, at least not at the counters near me.