making faces :: we all need something to warm us up in winter 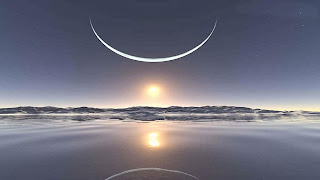 passed the astrological dividing line and now the days are getting longer. of course, the coldest days are still ahead, since temperature extremes are always reached the month after a solstice, which is why it's nice to think warm thoughts and drape yourself in warm things.

for me, warm things include warm colours and luckily for me, i recently had an order from beauty habit arrive with just what the season ordered to heat things up as far as my face is concerned. only one of these is a new item, but both suit my style perfectly at this point in time. in fact, i think that both items i'm reviewing will be things that i can turn to throughout the year, which makes them all the more valuable.

up first, let's look at the new: chantecaille hydra chic lipstick in "persimmon". this was released as part of their fall collection. of course, attention for all of chantecaille's collections is always directed more towards their animal-themed shadow and blush palettes, like fall's "wild horses". there's a good reason for that, because chantecaille has made it a feature of their seasonal business that each palette helps to raise money and awareness for animal and ecological causes. but that's no reason to ignore the sideshow now, is it?

"persimmon" is a colour that's extremely trendy right now. it's a warm, bright red-orange shade. hydra chics are supposed to be more pigmented than the brand's much-loved lip chics, which i can see, but i still find "persimmon" well short of opaque. i think that makes it more approachable for people who might steer away from a full-on flame red.

it applies as a very warm semi-opaque red shade, a red with orange undertones and a lot of shine. after about half an hour of wear, the shine fades and the colour sets to more of a stain. i fond that as it set, it looked increasingly orange rather than red, which actually irritated me a little, because i loved the juicy shade that it applied right out of the tube. reapplying does perk it up a little, i just wish that it maintained its original tone a little better. the formula is light and moderately hydrating- less so than the lip chics, but still pleasant, even at this time of year when hydration is an important consideration.

certainly there is no more ubiquitous shade of lipstick than red and with hot flame reds are popular right now, there were a lot of shades i thought of that compared to "persimmon", but none that really matched it. hourglass "raven" is redder and much more opaque. guerlain "rouge sensuel" [limited edition from spring 2011] is pinker and seems somewhat sheerer. mac "hibiscus" is a bit redder and definitely more opaque on the lips. if you missed out on "hibiscus" when it came out originally, this shade will definitely fill your needs. guerlain "genna" is more opaque and more orange. i'd rate "persimmon" as being more appropriate for daily wear than a lot of comparable shades.

next up, we have "marigold" eye shadow, a pink-gold shade with shimmer and sheen that's incredibly difficult to photograph. it's a remarkably pretty shade that can function either as a neutral or on its own, incredibly smooth and even in application, although it looks dusty in the swatches, i assure you that it is beautiful in practice. it's an extremely finely milled shadow that goes on subtle with a twist- something you notice up close or in the right light. seriously, i want to kick myself because i could not properly communicate the beauty of this product.

in terms of texture, i would rate this even higher than "basalt" and "sel", which i reviewed previously and loved. it's exceptionally soft and applied evenly and with just enough pigment. the only thing i would fault it for is the name, which is completely misleading, since this soft, muted rose gold is virtually the opposite of the rich mustard golds, burnt oranges and spicy reds one associates with marigolds. but that's not really a flaw, just a difference of opinion.

i was shocked, given my predilection for muted, nuanced neutrals that i really have nothing to compare to this one. mac "paradisco" [a ridiculously underrated shade] is brighter and more coral/ peach. mac "nanogold" is lighter and holds together less. nars "night star" is more of a yellow/ orange with obvious shimmer. there's nothing in my collection that has that rosy peach undertone combined with the warm metallic sheen that makes up "marigold". it's a christmas miracle!

"marigold" was originally released with chantecaille's spring collection but is, as far as i know, part of the permanent collection now. "persimmon" is also joining the permanent assortment, so you have time to buy both of these lovelies if you think they're your style.

if, like me, you're in canada, the brand is fiendishly difficult to find. there are two stores in the entire country that sell their products as far as i'm aware and so you'd do best to order on line either through beauty habit [kudos to them on their excellent customer service!] or through the online presence of a retailer like nordstrom. they are worth the trouble it takes to track them down, especially their sublime eyeshadows, but you'll want to keep an eye out for swatches on line to get a sense of the shades themselves, as online swatches and descriptions can be hit or miss.

here's a look i did during my period of convalescence that i quite liked, that uses both the products reviewed here. 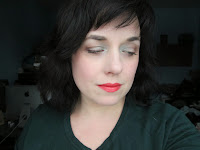 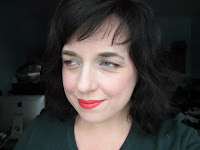 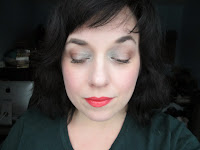 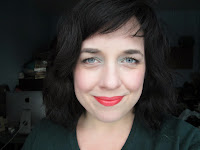 despite the complications and risks inherent in finding chantecaille products, i can see myself continuing down this path, particularly with their eye shadows. they're just that delectable.