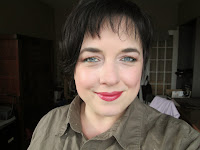 after sharing a number of looks with neutral eyes and vampy lips, i did promise that i was going to try to post something a little more in line with the colours of fall foliage and the rich autumnal tones that seem more warm and inviting.

i touched on these before when i featured

the relative darkness when i get up in the mornings and complete darkness when i get home at night makes it difficult for me to snap quick pictures of any look, which is why there haven't been as many of them lately. this week, however, i had to take time off to get minor surgery and yesterday i felt like i needed something to lift my spirits a bit, so i tried dressing up my face a little. [just because it's minor surgery doesn't mean it can't cause some major pain and inconvenience.] i had a little bit of an allergic reaction to a serum i tried [because my day was going so well otherwise], which you can see on the left side of my face, but other than that, i think this look works pretty well.

i'm not sure that such rich, warm colours are best-suited to my skin tone, but they do a nice job of perking up my looks the day after i've been in hospital.

interestingly, i managed to combine all of the shadows i featured in the post linked above. that might seem excessive, but when you're trying to mimic the colours of the fall, you want to make sure that you get a variety of colours in there. so

ellis faas eye light "303" is on the centre of the lid. i patted a couple of layers on to make sure that i got the full metallic golden bronze effect. in an arc around it, i swept mac "one to watch" an earthy orange brown. on the outer part of the brow bone, i blended le metier de beaute "fire lily", a sparkly cranberry and in the outer v, i pressed some of the mahogany shade from nars "blade runner". i put urban decay "invasion" 24/7 liner along my upper and lower water lines and on the lower lash line, i patted the forest green shade from "blade runner". in the centre of the lower lash line, however, i put just a small dot of "e303" for a little added dazzle. along the brow bone and on the inner corner of the eye, i used mac "shroom", a well-named frosty beige that is the colour of white mushrooms. the mascara is from marc jacobs.

because there are a lot of shades and a lot of blending involved, i wouldn't recommend this look for mornings when you're in a hurry, but if you want to spend some time playing around, either for a big event or just to practice techniques, why not?

i used three of the cheek shades that i mentioned in my original post, although two of them aren't actually blushes. the only blush colour used is mac "fever", which has more than enough colour going for it. i highlighted along my cheekbones and above my brows with hourglass "luminous light" and dusted "dim light" over my forehead, nose and chin. underneath all that, i have marcelle bb cream as a primer under urban decay naked foundation, shade 1.0 and dior's firming concealer [which isn't firming, although it's a decent enough concealer].

the lips are urban decay's "manic" from their phenomenal new line of 'revolution' lipsticks. it's a warmer red plum shade that is definitely muted enough for every day, but which still has enough colour to hold its own. in fact, one of the things that i like about this look is that every part of it is strong, without being overwhelming. 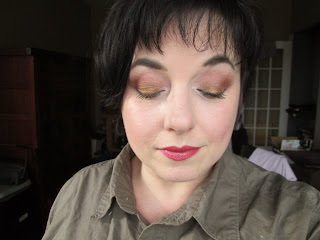 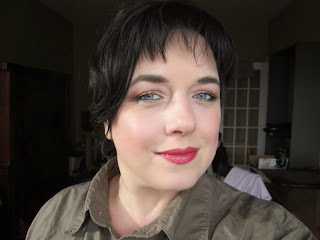 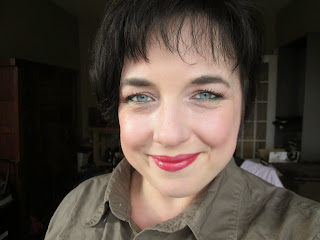 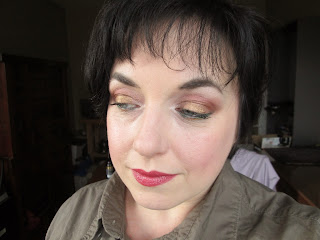 so you see? i'm not just into one look for the fall season [even if the neutral eye/ dark lip thing is very easy to do].

and now, if you'll excuse me, i need more inspiration, also known as pain meds.