mental health mondays :: you are getting sadder and sadder 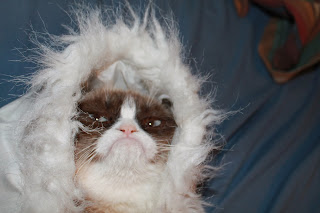 if you're reading this from anywhere from the southern united states down to australia, you can just ignore this post. i have nothing for you. you're probably happy right now and there are millions of people who would like to gouge your eyes out for no reason other than the fact that you are happy and we are not. even if our lives are fine. even if nothing much has changed to make things worse than they were a couple of months ago. because we live in a place that makes us miserable by denying us some of the basic elements we need to be happy.

like light and the ability to step outdoors without wanting to die.

ah yes, it's the time of year when we in the north start to develop symptoms of the much-referenced but little understood seasonal affective disorder. long understood to be a distinct type of mood disorder, it will be reclassified with the imminent [always imminent] publication of the dsm-v as a variant of major depressive disorder. that may not mean much on the surface, but it is at least an indication that psychiatrists are realizing that depression is more or less one syndrome with many variants and that a seasonal pattern may be just one. it's also a way of acknowledging that people who exhibit signs of seasonal affective disorder should be treated as being at risk for depression of any kind. the going theory seems to be that depriving someone of light may push them into depression, but only if their brains were wired with the potential to become depressed anyway.

there are lots of theories as to why people might develop seasonal affective disorder and, despite what you may have heard, they are all just theories. no one has produced any concrete proof that the disorder stems from problems with light deprivation, or a lack of vitamin d or any of the other things that we think might cause s.a.d. it manifests itself with much the same way that depression of any sort does: with pronounced low mood, lack of energy, fatigue and an overwhelming desire to eat until you burst.

the condition may be our brain's way of telling us that we're just not supposed to be running around when the world is dark and cold, because that's an excellent way of ensuring an early death. our ancestors didn't spend their time going from home cave to work cave during the winters, because they likely wouldn't have survived the round trip. so our ancient brains are simply warning us against activities that it perceives as threatening. there are examples in nature of animals who have developed methods of dealing with these threats, mostly through hibernation. [doesn't that sound like a great plan? you eat all the fatty foods you can stuff in your face and then sleep for a couple of months. you wake up well-rested and thin. how did we not pick this one up?]

since we don't have the option of hibernating most winters, we need to figure out other methods of dealing with ourselves when the nights get long and the mood gets low. here are a few tips...

my personal, non-professional, interested observer but far from expert opinion is to start with things that are simple. finding a good quality vitamin d supplement and talking to your doctor about your symptoms are both relatively low cost. for greater therapy, i'd recommend moving on to light therapy, since it has the most science behind it, and keeping the drugs and ion machines as second- or third-line options.

we can't avoid going through winter in this country. let's just all try not to kill ourselves for another year, ok?