October 12, 2013
returning for a moment to the world of colour analysis... although i found it easy enough to figure out  [and yes, i've been testing out my theory, which seems to hold], i don't really feel like i've made a lot of progress on my own. i haven't really eliminated more than half the seasons and i don't even feel like i've answered the very first question of colour analysis with any certainty: i don't know if i'm cool or warm toned. when i started this, i was certain i leaned cool. and yet a couple of warmer neutral seasons seem to flatter me with a stubborn tenacity. 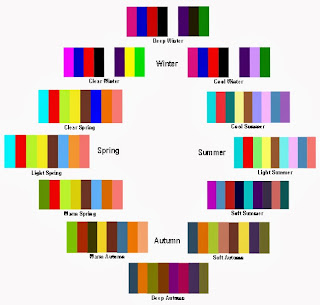 a few things i have determined:

either of the soft seasons are completely out. both make me look haggard and older than i am.

either of the light seasons make me look washed out and a bit sick. my face needs some serious pigmentation.

although there does seem to be some warmth in my skin, colours from the purely warm palettes seem heavy and artificial on me.

neither of the true cool seasons is terrible and can actually be quite flattering.

the two bright and two dark seasons seem more flattering than any others.

so now it's time to do some eliminating. and to do that, i've enlisted the help of an article i found on truth is beauty. based on this, i decided to give each of the seasonal deal-breakers a try. as she says, this doesn't necessarily point you to one specific season, but it can help rule some out. and that's what i need help doing.

to keep things simple, i did this with no makeup at all and my hair wet, so i could keep it out of my face

so here we go... deal-breakers:

first up, i thought we'd try the two least likely candidates, the purely cool seasons. so for a true summer, she highlights a true mint green, a little greyed, as all summer colours are, since they are never highly saturated.

well. that's not the end of the world. it's kind of nice, actually. as strange as it seems, i can't eliminate this season based on seeing myself in this colour, although i feel in my gut that it isn't a match.

moving on to true winter, which the article says can wear a pure lemon yellow, without a hint of brown or orange, just a hard, saturated lemon. [it's true, winter seasons can wear supposedly "warm" shades like yellow and orange, because their skin is more forgiving of temperature as long as the colours are quite saturated.]

ok, this one we can throw out. i look like i'm about to pass out. the dark circles under my eyes look much darker and heavier, like i'm being pulled downward. so goodbye true winter. [and yes, that is the same coat lining that i used on dom, which i determined was too crisp to be a spring shade.]

now it gets trickier, because we're into seasons that seemed to work.

first up, the  dark seasons. we'll start with dark autumn, which the article identified as having a truly unexpected deal-breaker in the form of a slightly reddened violet. when i look at dark autumn colour palettes, i have to admit, i can't find this one, the violet looks more like a puce, but i do kind of get why this could work. after all, the autumn season is suffused with golden light and the complement to gold is a clear violet, so this shade would provide balance. i've noted before that it's almost impossible that i'm a dark autumn, because it would be extremely difficult to conceive of someone with pale skin and eyes projecting both warmth and darkness. but let's give it a go...

i find that it yellows my skin a little, makes my freckles and unevenness in pigmentation a little more obvious, but it isn't terrible. i think it might underline the fact that my skin has warm and cool elements, but overall, this isn't my best shade. given all the other evidence against it, i'd say we can eliminate this one.

as for dark winter, i tried out a yellow that's a little more browned, something that qualifies as "goldenrod". it's a bit deeper, a bit richer, a little less saturated than other winters' yellows, but it's still pretty intense.

when i asked dom to pick a favourite from these shots, he picked this one without batting an eyelash. and you can see why. although dark winter has been my dark horse throughout this process- never the absolute best but always far from the worst- it's really hard for me not to like what this colour does to my skin. it has exactly the right amount and the right kind of warmth for me and all the pigmentation issues and balance issues that i've seen with other colours are suddenly cleared away. most interesting to me, though, is how much brighter my eyes look. i've already determined that there is a ton of dirty yellow in my eye, but this shade makes it look like i'm a jack-o-lantern that's just been lit up. definitely still on the table.

and finally, we move to the brights, which have been almost universally flattering and definitely where my thoughts have been leaning throughout this process. one of the things i'm learning is how much saturated colour i can stand.

so here's bright winter, a sharp acid green that truly holds nothing back.

well there's something a bit unexpected. i don't think that this is as bad on me as it was for dom, but it really isn't great. for once, we've found a shade that my natural colouring can't compete with, because it's softening me up a bit, tinting me green. i feel like the colour looks drained from my face, especially my lips, which aren't super-pigmented to begin with. history tells me not to discount this one entirely, but that's not the message i'm getting looking at this photograph.

and finally, bright spring, an intense, bold fuchsia/ hot pink. i should mention that black and fuchsia is probably my favourite colour combination in the world. that's not to say that one automatically knows what works, but sometimes that does happen and it's a combination i'm drawn to again and again, because it seems to work on me.

well, the dark winter goldenrod might edge this one out [it doesn't do that magic thing with the eyes, although it does make them very clear], but i'd say it's a tight race. unlike with the bright winter, i'm absolutely not overwhelmed by this shade and i don't even think it looks especially bright on me. it's quite natural. this is the point where i mention that even the most conservative of my friends have been won over to the rosier side when i've worn these shades around them. it is something that i know from experience works well. absolutely still a contender.

so what have i learned? well, i always knew that bright pinks worked on me. but in the process of going through this analysis, i have discovered something shocking: yellow is actually one of the better colours on me. blues were always obvious, but yellows weren't. they were the one family of shades i knew didn't work. except that i was wrong and the right ones are very flattering, even if i'm not wearing any makeup or something to distract the eye.

although the bright winter elimination might be a bit surprising, i actually have to admit that green, not yellow, is one of the most difficult colours on me. it's interesting, because it's the one shade that every season has something from. yellows are nearly absent from the true summer palette. purples don't work well on true autumns. reds are supremely difficult on either of the soft seasons. oranges are absent from both the truly cool palettes, summer and winter. true blues are difficult for true autumns and even dark autumns, whose blues lean more towards what you'd call teal. but every season has some type of wearable green. it's just possible that i haven't found mine yet.

do any of these shades work really well for you? any of them help you eliminate a season for yourself? or do you think i've made a huge mistake in my analysis? let me know in the comments!