October 03, 2013
with a grande dame like "madame batifole" as part of their fall collection, guerlain runs the risk of having their other lipsticks obscured by her intensity and drama. and that would be a shame, because her good friend "madame flirte" is no shrinking violet. described as a "fruity red", she is indeed a cool, juicy, happy hue with enough red for impact, but enough lightness that she can fit in anywhere.

although "madame flirte" is a rouge g, she's not quite the same as the "regular" lipsticks with that formula. the shade lacks opacity- although she's not sheer like the pink shades from the spring 2012 collection- so there's always a hint of one's own lip colour lurking in the background. she reminds me a lot of "rouge sensuel" from the spring 2011 collection, although "flirte" is a bit cooler and pinker and doesn't have the subtle warm-gold shimmer of "rouge sensuel". they make nice companion pieces and, since both are limited, they make reasonable substitutes for one another, as long as you can handle a certain variation in colour temperature within the red family.

in fact, when you look at the two shades together, they seem fairly close, but i do see the difference on my lips. another similar shade is the limited and sadly gone mac shade viva glam cyndi, which again looks similar swatched, but pulls much warmer/ browner than either of these on my lips [and also bleeds something fierce, which is a bit of a bummer]. something like armani 608 is cooler and darker than either.


ironically, i find "madame flirte" to be a very spring-like red, perhaps because of the natural brightness of the shade that's pronounced, but not overwhelming. it's not a power red, but it's not at all muted either. it seems very fresh, clear and, true to the description, fruity when applied. women whose complexions favour low to moderate colour saturation or who lean noticeably warm might have a little more difficulty feeling at home in such a colour.

SEE HOW SHE LOOKS IN ACTION AFTER THE BREAK...

there's not a lot more that i can say, since i feel like i've talked myself out when it comes to guerlain lipstick. yes, they're pricey, especially the rouge g's with their baroque packaging, but they really are quite fantastic to wear. they're one of the better formulas when my lips are feeling parched, since they don't aggravate dryness and don't bleed [even a soft but pigmented shade like "madame flirte"], although when things are really dire [usually in february or so], i almost have to swear off lipsticks entirely.

here's the lady herself in action... with a few friends to support her loveliness. 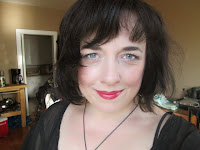 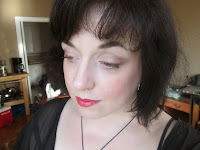 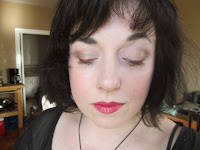 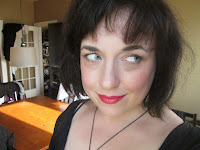 there's mostly neutral stuff going on here, but i quite like the counterpoint of the brighter lip and the unexpected rosy liner. it was fun seeing how the softer shades i used on my cheeks built up into something different and, indeed, something with a subtle but definite impact. i felt very glow-y and healthy looking.

Bellyhead said…
I think you wear these brights so well. Mme. Flirte is a very pretty color and I adore this slightly sheer version of the Rouge G. :D
8:51 PM

morelikespace said…
Thanks very much, Belly! I do feel more comfortable in brights, for certain. I know that some people find them gaudy, but they've always felt fairly natural on me.
9:13 PM