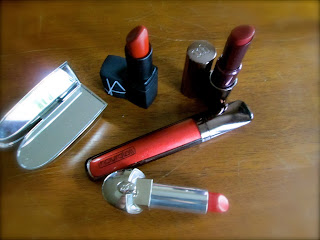 yes, fall is generally considered to be about vampy lips and they'll have their own seprate column, but what about those rich, warm shades of red that seem to embody the very essence of autumnal splendour? don't they deserve a post.

for a long time i avoided warmer reds and oranges because i assumed they would mesh with my cool-toned skin. in fact, my investigations into colour analysis have revealed that my skin isn't so cool-toned as i'd thought [and may not even be primarily cool] and as a result, warm and cool choices can work equally well. most importantly, the majority of people have skin that contains both warm and cool elements. it's really only people on one extreme or the other who have to worry about staying on one side of the tonal equation. the rest of us can be happily bi when it comes to our choice of reds. here are a few of my favourites from the warmer side...

i reviewed my first pick from urban decay's new line of "revolution" lipsticks a while back and it didn't take me long to accumulate more. my new favourite is this plummy medium red [or is it a reddish medium plum?] called "manic". it's quite muted despite being a fairly dark colour, so it's perfect for daily wear. for those of you who miss mac's "mystic" lipstick, this is probably the best replacement you could ask for. colour-wise, it's not quite as brown and is a little lighter- mac's own "party line" is probably closer to the base colour- but "manic" has that mysterious, luminous sheen that made the original mystic so appealing. plus the revolution formula is truly remarkable- one of the best on the market and a wonderful surprise for the price point. i feel like i can officially call off my search for a new mystic.

here's a real "wow" shade. it looks molten, like a liquid red rust, with a high-shine metallic finish. it's
just one of those things that a cosmetic aficionado is going to want on general principle, but it's also a lovely fall-appropriate colour, especially for warmer-toned lasses. remember when i said that most people could wear a mix of cool and warm tones? that's true, but this is the sort of colour that's going to test those limits, because there isn't a hint of coolness anywhere in it. i really like hourglass lip glosses, although like most glosses the wear time isn't incredible and with an opaque shade like this, the fading will be more noticeably uneven, but even i have to admit that this shade might be beyond the warmth threshold of my skin. it's just so darn wonderful to look at.

before you curse me out for including a limited edition shade from a couple of years ago, let me reassure you. rouge g #27, "gisela" is almost identical. so really, this is a recommendation for that colour, but since i don't own it [because even i'm not in the habit of duplicating $50 lipsticks in my collection], i figured i'd stick to what i can show you first hand.

i reviewed this shade when it initially came out and i haven't changed any of my opinions. of course, guerlain make a fine lipstick. virtually every time i do a post [or series of posts] on my favourites within a colour family, there is at least one entry from guerlain. [spoiler alert: there isn't one in my forthcoming list of vampy favourites. i demand a vamp-tastic rouge g.] rouge g is their especially luxurious formula and it really does bring the magic you'd expect for the price.

it's not merely that it's hydrating, rich in pigment, long-lasting or any of the other things that one normally praises lipsticks for being. those are great, but what i really love about rouge g's is that there is a complexity to the shades that differentiates them from any others and that the nuances are visible on the lips. i find that when i wear them, they do catch my eye when i get a look at myself in a mirror [even in the mirror in the vomit green bathroom at work], because the colours are never surface-only.

certainly that's the case with gardner, whose hints of copper and gold glimmer forth from deep red with a bit of brown, just enough to make it seem like a lightly roasted shade, but not enough that it looks dark. i stand by my original evaluation that it reminds me of autumn foods- peppers and hearty tomato-based soups and warm spices. most shades in this range are browner. nars golshan is a few shades cooler [and just barely missed being included in this piece itself.] scrumptious.

ok, you got me. this isn't red. it's orange. and it's not even a red-orange, but a brown-tinged orange, so in theory it has no place here. but i would be remiss if i didn't include it in a list of autumnal shades not just because of its name, but because no shade does quite a good a job in my book of capturing that tone of the last leaves of the year as this one. [basically, between nars and guerlain, i made myself choose one shade each. in reds, i opted for "gardner" over the slightly brighter "golshan" and in oranges, i chose the more muted "autumn leaves" over the pumpkin shade "gypsy" from guerlain. although all four are great choices.]

this is another one i reviewed when it first came out, but it's important to remember that it's still around, because it's a shade that was indeed made for fall. it's much more muted than the zingy tangerines and warm corals of spring. it's pigmented but not saturated, a hallmark of autumn colours in general. they're warmed by gold, not bright yellow. it's a lovely everyday shade, although again, decidedly warm. i do think that the orange tones complement cooler eyes, which helps redress differences with the tone of the skin.

nars has a lot of great shades for autumn. i'd venture as far as to say that they might have more than any other brand, since slightly muted colours are really a forte for them. autumn leaves is probably the most original among them, but i could also have included browned berries like vendanges and fast ride, or jewel-toned reds like transeurope express or scarlet empress. my advice is that if you want to start a fall lip wardrobe, the nars counter should be your first stop.