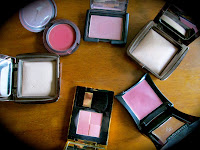 i'm really lucky. dom not only accepts my obsession with all things aesthetic, but he even finds it somewhat interesting. he has opinions on lipstick and eye shadow colours that go beyond "looks nice" and i really appreciate that. but even he has his limits and that limit has a name: blush. he'll say straight up that he doesn't really notice the difference from one to the other.

indeed, it can be difficult to spot the differences, but just because they're subtle doesn't mean you don't notice the effect. i always know when i've found a great blush colour because i'll get a bunch of compliments from people who can't pinpoint why i look good, but i just do. people can identify eye shadow and lipstick, even if it takes them a minute to figure out that that's what they're really responding to, but blush befuddles. there's something that people see is different, but they can't really see it. blush flies under the radar. it's your secret weapon.

in fall, as the light begins to diminish, blushes can really make their mark. in the fall, we can turn to products that shape the face and add colour to the right places to make us look sculpted and perfect and radiant and ethereal and fierce and proud and passionate and... well, you get the idea.

here are a few of my very favourite blushes for the fall season...

ok, you can't do a list of "best blushes" without including nars, so we'll just get this one out of the way. in fact, nars has a lot of great fall blushes. their spring collection featured an incredible fall blush called "seduction". their previous fall collection had an amazing blush called "outlaw". but if i had to choose just one nars blush to take me through this season, it would be "sin", which is mercifully part of their permanent collection.

the base colour is a plum-pink, on the deep side but not overwhelming. in fact, it works across a wide variety of skin tones because it has a lot of intense light gold shimmer. aye, there's magic in the gold. it's very fine and won't emphasize pores, but it will just make your skin glow, especially in the slant light of autumn. you can build it up, or buff it out so that the effect is quite subtle, but this, to me, is an absolute must have.

personally, i think that mac blushes are underrated. they aren't the longest lasting formula, but they compare on that front with higher end products and their selection of colours is remarkably broad. "fever" is a forgotten gem from the permanent collection, a deep matte red that looks kinda scary in the pan, but can be applied with a light hand.

i love just putting a little of this in the hollows of my cheeks, because it gives an extremely natural sort of flush, but also shape and definition. it's one of the very few blushes that i've had to repurchase because i ran out and it's actually one of the colours i'm wearing for the bulk of "conversion" [not that you can necessarily distinguish it, but it does help make sure that my face always has some shape to it.

a wonderful way to get a rich autumn flush.

here's a new one that's apparently being added to a permanent collection. i hadn't tried the ysl blushes before but having dipped my toes in the powdery water with their fall collection, i can tell you that i will be making return visits to their shores.

"pepper rose" is a shade that's likely to suit everyone with a light to medium complexion. i actually think that deeper complexions could wear it because it builds very well. it's shocking how little you need to get coverage. that might make the $55cad price tag a little easier to swallow, since that places them above everyone except guerlain, who offer two different shades in a compact for the same price.

of course, you could argue that the 'blush radiance' line also offers two shades, since there are two quarters of the blush that have shimmer and two that are satin, but since the powder is fairly small, you're unlikely to be able to use one or the other, as you are with guerlain. you can, however, opt to move your brush more over the shimmer sections or the satiny sections and you will see a difference in the colour on your skin.

even better, the formula is probably the longest-lasting powder blush formula i've ever tried. my cheeks swallow blushers whole. i can leave my house looking like bozo the clown and reach the office with a deathly pallor. but this formula hangs tight throughout the day. [its only close competitor on that front is actually guerlain. everyone else i need to reapply throughout the day.]

permanent? apparently. but exciting enough to warrant getting immediately.

it's a cream! no! it's a powder! no! it's illamasqua's new cream-to-powder velvet blush in 'peaked", a beautiful deep rose-violet shade that dabs on as an intense berry but buffs out to a lovely victorian-era stain. the colour would be flattering for many, although the very warm-toned and very fair probably won't have a lot of use for it. it's slightly muted, so it won't ever look dazzlingly bright, but it's got a lot of colour, so it will have presence.

i find that on my pale skin, dabbing even a little can look like too much. even as i try to smooth it out with my fingers, i wonder if i haven't made a mistake. but when i employ a brush to blend the colour outward, all is immediately forgiven. it's not the most hassle-free cream blush [i don't think you can use your fingers only], but it is relatively long-lasting, as long as most powders on me, which creams almost never are.

this was one of two shades released with illamasqua's fall "sacred hour" collection and it truly does warrant a closer look. [there's a second shade which will be perfect for warmer skins.] it really has a fruity currant tone to it that is too often missing from blush ranges, with a hint of earthiness underneath. it's that earthiness that i think keeps it from seeming too bright.

here's hoping there are more velvet blushers to come!

finally, even though it's fall, a girl might still want to add a little light, in the form of highlights on her skin. never underestimate the power of manipulating light and the way it strikes your features. there are camera crews who toil over getting celebrities' every skin cell lit just so and look at how so many people fawn over them.

in the spring and summer, you can call attention to your features by adding elements of bright, clear light, but in the autumn, that can look a little unnatural, a little forced. and that's where hourglass and its army of ambient lighting powders comes in. designed to mimic the effects of various sorts of lighting on the skin, these combination highlighting/ finishing powders do work a little magic when it comes to how people see you.

"dim light" is a slightly peachy champagne that adds a hint of warmth and an understated glow to skin. it's not shimmery and it isn't bright like a traditional highlighter. instead, it has the effect of softening one's overall appearance and diminishing the look of lines and pores in favour of a face that looks like it's perpetually in an autumn sunset. i consider this probably the most universal of the ambient lighting powders, because it's the most neutral. it has an effect without being very noticeable.

"luminous light" purports to mimic the effect of candlelight and, lo and behold, it does just that. this is one of the most shimmery of the ambient lighting powders and you will definitely see a glow where it's applied. but it won't be disco ball. it will be candlelight dancing on perfect skin.

unlike a lot of shimmery highlighters, "luminous light" doesn't emphasize pores. it helps mask them.

colour-wise, it can look close to "dim light", but when seen in person, it's lighter and yellower rather than beige. it's a cross between "diffused light" and "dim light" with some extra shimmer added.

these are the two shades i've been reaching for almost daily as i venture into autumn's shadowy arms. i feel like they'll keep me looking fresh and radiant through the darkest hours of the season, until i'm ready to return to the brighter, more sun-kissed embrace of spring.