October 11, 2013
it's been too long since we've done this... last week i was away on business [that part of my life i don't
really talk about much here, because i'd like to protect them] and the week before, i was just distracted and lazy. but now i have much to share...

i had insomnia again last night and it lead me to a rare moment of human empathy. i woke up around two, which is about standard for me and lay in bed, unable to get back to sleep. mostly, this was just because my body has started to do this to me lately, but in part it was because i was distracted by the sound of loud snoring. from the next apartment.

maybe it was a particularly quiet night, so i was more attuned than usual to the sounds going on around me, but i've had insomnia in that bedroom many times over the years and this was pretty special. noise doesn't travel easily through the walls in the building. i can only image what it sounded like on the other side of the wall.

now, the noise was a little irksome, but i honestly think that i would have been awake with or without it. what troubled me more was that snoring like that is problem indicative of some pretty serious issues. at the very least, it would indicate that the gentleman in the next apartment is not getting quality sleep, since he's not getting quality breathing. that has to leave him feeling extremely run down during the days and probably has no idea why. so rather than feeling annoyed at the fact that i could hear him snuffling away [because it's not like that's anyone's fault], i lay there in bed feeling sorry for this guy. genuinely.

although it can get taken to extremes, that does seem sort of healthy to me, engaging the empathetic reflex. i think i'll try doing it more often.

but in the meantime, here comes...

so now that barilla pasta have decided to add a nice helping of hatetini to their lineup, perhaps we should look at what their competitors [and other critics] have had to say about that.

real fact #__ snapple's "real facts" are largely b.s. you could look it up.

you know how all the decent congressmen and women have given up their salaries during the shutdown in solidarity with their employees? guess what party this whinging biatch who has a problem with that comes from...

it's coming up to halloween, which always makes me think of the 80s cassette label nekrophile, who used to release strange and obscure things like lashtal. [i still have the  original cassette.]

something i learned this week

the system works! for the first time, i put on my spring/ fall coat, which earlier this year was still a bit snug around my torso and while it's not exactly baggy [it's a sort of slim cut little number], there is definitely more room inside. hallelujah. my slow and steady diet plan is having the intended effect, slowly but steadily.

all right, that's really not something i learned, because i always knew that following a diet resulted in weight loss, but i learned this week that it has indeed been working for me these last few months.

goal for the week

get caught up on blogging! there are a bunch of posts i have prepared, i just haven't had the time to type them up. also, i haven't taken the time to do a lot of the necessary swatching. as the days get shorter, my window for swatching becomes increasingly narrow and i need to be more disciplined about this.

one of the things that i do plan on doing for the blog is searching out more halloween-themed images. and this year, if you'd like to send me any to share, i'd be more than happy to do so. for those of you who aren't familiar, i'm obsessive about halloween and every year i venture out into the streets of montreal to photograph the different decorations that festoon houses in the area. it's great exercise and great fun.

normally, simon is very composed in photos. but not always... 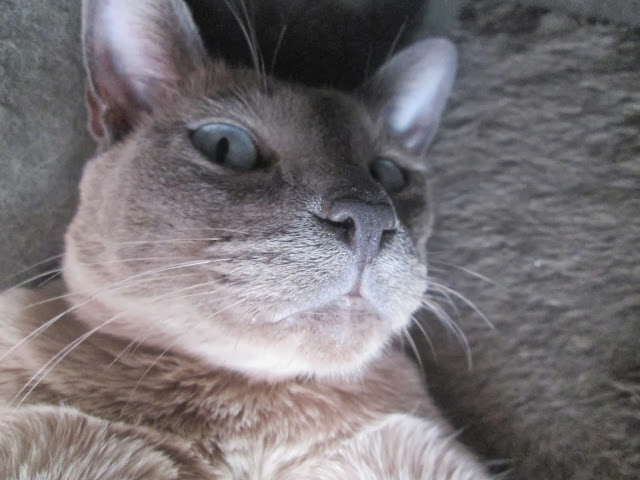 that's all for this week! thanks very much for reading!

[this week's image of the week is the internet sensation and world-record holder as fluffiest cat colonel meow. like many great folks, he's a libra and his birthday just happens to be today. hail him.]