making faces :: a new member of the glossy posse 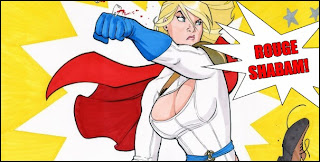 as they go through the process of revamping all of their permanent products, it was to be expected that guerlain would soon get around to their glosses. it's not that there's anything particularly wrong with them- the kiss kiss gloss formula is one that i like, despite it having an uncharacteristic fruity scent that puts me off a little. the colours are softly shimmery and feel very good on the lips, although they don't last particularly well when compared to other high-end brands [chanel and aramani in particular]. but really, the biggest problem with them was that they just didn't seem that exciting when you looked at everything else that guerlain had come out with in the last couple of years.

and so guerlain tried to fix that, batman style.

this spring, guerlain launched their "gloss d'enfer" formula. that literally translates as "gloss from hell", although a more realistic version would be something like "kick ass gloss". which is appropriate, since virtually every one of them has a superfriend-tastic name that begs to have that cartoon horn blast behind it when it's spoken: 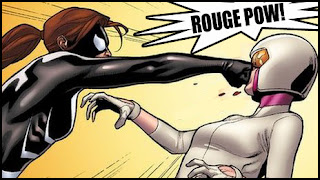 [ok, that last one sounds like it would also require a shot of penicillin, but the names are a lot of fun, generally speaking.]

although these launched a few months ago, i took my time picking one up, which i can do without fear because they're all permanent. some have shimmer while others are creams and can i just add that i would really like it if brands took steps to make it obvious either in their naming or numbering systems what kind of finish something has? seriously, i love variety as much as the next person, but this is the internet age and i don't want to spend my time guessing whether "iridescent" and "shimmery" mean the same thing on planet lip gloss. that said, online swatches do make it relatively obvious which of the shades are really shimmery and which ones aren't. plus, of course, guerlain are widely distributed, so chances are you can see them in person.

personally, i went for one of the shimmer-free shades... rouge shabam!

i'd wanted this sort of shade for a while, since all of the warmer reds/ corals i have have shimmer. what i wanted was a semi-sheer red-orange and that's exactly what this gloss delivers. it's not opaque, but it deposits a good amount of colour with its nice paddle-type applicator. it looks intense in the tube, but the formula is considerably sheerer in use. considerably. 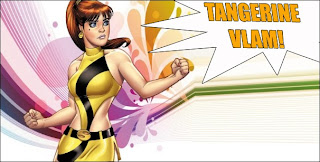 in fact, some of the softer shades of this formula hardly seem to show up at all, they're so sheer. i know that this has been a complaint with some of chanel's recent launches- that it's hard to justify high end pricing when what you're getting is little more than a clear gloss with a hint of shimmer. to that, many argue that lighter shades are meant for layering, to which i say, that's awesome, but there are lots of options you can layer that come at a lower price tag, so if it's really not adding that much to your look... what are you spending the money for?

well, the answer for many is that prestige brands have more luxurious formulas. and if the gloss d'enfer truly are the glosses from hell, lucifer apparently makes a mighty soothing gloss. it feels very soft, is extremely shiny and applies very evenly. it's actually in this last point where i feel a high end gloss, and this one in particular, distinguishes itself. too often a sheer formula bunches up like an ill-fitting bottom sheet on a bed, thicker in some places and missing from others. trying to correct this can involve a lot of lost time and/ or applying way more gloss than you ever intended to wear, neither of which is a great option. the gloss d'enfer formula is almost like a high end nail varnish: it seems to know how to level itself. how much so? i can apply it without relying on a mirror and it looks great.

unfortunately, in this reformulation, guerlain haven't done much to improve their wear time. even if i'm being careful not to pleat my lips and i'm not constantly drinking water/ coffee/ wine or kissing a cat, the patent shine fades in well under an hour and the colour can't hang on as more than a stain for over two. consider that the shade i got was one of the brighter, more vibrant shades and i really can't see getting much mileage at all from the softer ones.

now, most people expect to be touching their gloss up fairly often, but it's still a question of value. in "rouge shabam's" defense, i will say that after a few touch-ups, the stain that remains gets more intense, so you have something that's more like the original colour.

the colour itself is a warm poppy red, shimmer-free and very summery. it's an easy way to pull off a bolder shade without attracting too much attention.

the comparable shades that i have actually aren't all that comparable. mac "sonoran rain" is warmer, much more opaque and has a fine gold shimmer. mac "viva glam cyndi" is more muted, more coral than true red and more opaque. rouge bunny rouge "uncaged tigress" is pinker and has shimmer. mac "red devil" is a bit more similar, but again, more muted/ coral, slightly shimmery and more opaque. chanel "myriade" is a cooler red and has very visible shimmer.

i've shown it here swatched next to "red devil", since that was really the closest match.

in fact, most of the shades in this range are what i would call "uncomplicated", meaning that there's not a lot of nuance to them. there aren't multiple shades of shimmer mixed in with the base colours. the colours don't look appreciably different in different lighting. that makes them easy to wear, although it does tend to mean that there are more potential lower-cost duplicates available. [just because i couldn't find a match for "rouge shabam"] doesn't mean that it doesn't exist- i think that nars "wonder" and chanel "holiday" are both similiar, although more orange, for instance.

the verdict? if you find a shade that you like and want to invest in, your lips will be happy. yes, you can expect to reach into your purse for your secret weapon fairly often, but chances are you won't mind too much. because the shades are easy to wear in any situation, chances are you'll get a lot of use from whichever one you pick. but is this a real revelation in the competitive world of lip glossing? no. it's a nice formula in some reliable colours, not a superhero.

so here's a look at me playing superhero in "rouge shabam", with a little help from its friends... 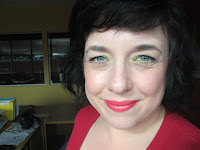 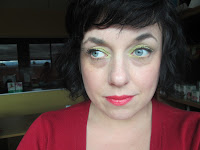 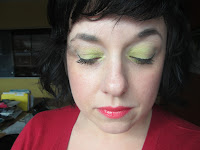 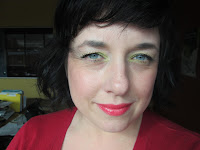 i'll say thanks in advance for not making fun of my crepe-y eyelids. clearly, i was not being a good girl about applying my eye cream!

guerlain gloss d'enfer is available everywhere guerlain is sold. sephora has a limited selection of shades, but it does include "rouge shabam, if you're wondering.

the awesome illustrations above are originally taken from various comics, but were lovingly repurposed by dominic marceau. i seriously think that if guerlain was going to choose those names, the marketing campaign should have looked like this and damn expectations!

[and for you eagle-eyed readers who are wondering why the background looks different than usual... that's my actual office. my place of employment that pays for me to be the blogger and person i am, along with the revenue from my book of short stories, the movie i made and, of course, readers like YOU.]

January 30, 2012
that's right, it's mental health mondays. i haven't done one of these since suspending activity on this front a few months back and i'm still not sure if i have it in me to do this regularly, but we shall see. in the meantime, when i saw that my hero/ girl crush jenny lawson [the bloggess] posted this npr article on twitter earlier today, i couldn't resist resurrecting mhm at least for this week.

it seems that studies have shown ketamine, normally used as an anesthetic by surgeons and veterinarians and [at lower doses] as a party drug by ravers. ketamine is a fairly popular anesthetic because it has a relatively low side effect profile [at least compared to those of other similarly effective anesthetics, which have a nasty tendency to screw with your respiratory system]. in fact, even occasional recreational users are on fairly safe ground, since harmful, long-term damage has been confirmed chiefly in chronic users and addicts. timothy leary experimented with the…
Post a Comment
Read more