mental health mondays :: we've been saying this for years

June 03, 2013
there have been many, many, many controversies that have plagued the development of the latest diagnostic 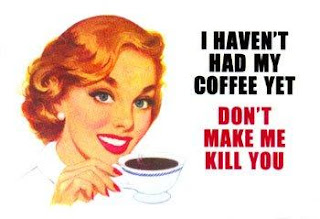 and statistical manual of mental disorders, but in the debates over how conditions were included, excluded and evaluated, something new has slipped into the crazy playbook, something that coffee drinkers would salute as basic common sense: caffeine withdrawal is now considered a mental disorder.

so if you've been telling people for years that they shouldn't talk to you before you've had your coffee, or arguing that you're a different person when you're caffeine-deprived, you can now relax, because the psychiatric powers that be agrees with you.

in the most basic terms, this means that psychiatrists acknowledge that going without caffeine, when you're a junkie, can mess you up. however what's not clear- and what won't be clear until some brave soul decides to test it- is how much it can mess you up. does it mean that you can show signs of irritability and have an official name for it? does it mean that you can bill your morning joe to your group insurance plan? most importantly, if i stabbed someone in the eye for looking at me funny this morning before i'd had coffee, do i have a legal grounds to argue diminished capacity?

i really can't wait until the first "coffee killer" goes on trial. i'm kind of hoping that it isn't me.

in the meantime, you now have official license to call yourself an addict and claim that all the problems in your life are purely the result of being in the grip of the demon caffeine.