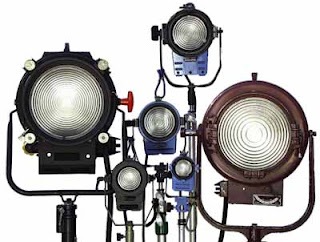 i've been promising this review for a while, so i figured i should just get it out there, rather than worrying about the fact that i've misplaced by battery charger for my camera, so i don't have quite the collection of shots that i'd want. it's high time that we have a little talk about hourglass' new ambient lighting powders.

these little boxes of magic seem to have divided much of the "makeup community", because they really are the sort of thing that defies easy description. unless you're used to working in the photography/ film industry. then they're a snap to explain. i mentioned them to dom, for instance, and he was fascinated. because he was able to relate them to something that he knew well: different sorts of lighting you use to get specific effects. it's just that most of us don't think of makeup doing that.

in makeup, we're used to powders that highlight the high points of the face, or that contour to add definition or that offer a sunkissed effect, as if we've developed a lovely tan. alternately, we're used to finishing powders, which set the colours we wear and give a final polish to a look. but the hourglass ambient lighting powders don't really do either of those things, although they kind of do both. and the extent to which they do one or the other differs slightly from one shade to another.

there are six colours that were introduced with the launch this spring, each of them designed to mimic the effect of a specific sort of light- moonlight, early morning sun, soft lighting, candlelight, etc. they have varying degrees of shimmer, although as a rule, the lightest shades have the least shimmer and the darker the shade, the more shimmery it gets.

the powders can be used in specific areas of the face to bring a light/ shadow effect, or all over as a finishing touch to makeup.

the first shade that i tried out was "mood light", described as a lavender-pink that mimicked the effects of soft, or low lighting. i didn't really get lavender from the colour at all, as on me, it reads as a warm pink with a distinctly amber undertone. it has a lot of pigment, which makes it more appropriate as a blush on me, no matter how lightly i apply it. used as a finishing powder, i find that it makes me look as if i've been running or outside doing a lot of exercise- a little flushed and excited. some people might like that look, but i found it a bit much on me.

i do find that this makes a very interesting cheek colour on me. because it blends out to a very soft shade, it's not a very obvious blusher, but it does offer a very soft colour and smoothes the look of lines and pores. i find that this effect is the more noticeable part of "mood light", because the colour tends to be less visible after a few hours, while the "soft light" effect last considerably longer. it warms my complexion up without making it look overly bronzed.

in terms of colour, it reminded me a bit of chanel's "rose ecrin" blush, which is actually paler. you can see how densely packed with pigment the hourglass powder is when you see them together.

used as a bit of a contour, it does actually give that "just emerging from the shadows" effect, your face as seen in a summer twilight, on a quiet terrace, sipping a cool drink.

second, i picked up "diffused light", which is compared to a ray of morning sun. that's about dead on. i couldn't come up with a better description, no matter how hard i tried. it's a very pale yellow, almost white but, if you look at it next to a true cool white highlighter like bobbi brown's "porcelain pearl", you can see the difference. [hourglass also have their own white highlighter, "ethereal light", the palest of the ambient powders.] what shocked me was how much of a difference that little touch of yellow made. rather than having a cool, moonlit glow, my face really did look like it was touched by early morning sun. "diffused light" immediately gives a very noticeable brightening effect, but it's much softer than a white highlighter.

the first day i wore this, i got compliments on how i looked. or, more to the point, people wondered why i suddenly looked so happy and radiant. i'm not making that up. the brightening effect was enough that it made me look happier. that takes some doing.

the shade has a real impact and it requires relatively little product to do so. swatched, it looks very thick, but it blends out easily and never looks powdery. it's got a little shimmer to it, but it's not very noticeable. in fact, it's mostly matte looking. [this is the second-lightest colour in the line-up. only "ethereal light" is more matte.]

this is probably my favourite of the ambient lighting powders i've tried, just because i do find that it mimics that sunlit glow perfectly without falling into the "bronzing" category. it's nice to have something that gives this sort of effect that pale girls can wear.

although i haven't had the opportunity to photograph it yet, i've also picked up "dim light", a very light peachy shade with a little more shimmer to it than the palest powders. it's said to be a balance of warm and cool tones to give a healthy glow. that's fairly accurate and it's worth mentioning that while it gives a little warmth to my complexion, there's enough pink in the peach tone that it doesn't look like a bronzer shade. it does give that lit-from-within radiance we all treasure, the kind of thing that lighting crews work for hours to get just so in advertising.

this one is also a bit too deep to work as an all-over powder on me, but i love it on my cheeks, where it works a kind of magic. more on this when i have a chance to photograph it.

so, are these little wonders worth it? a lot of people who know cosmetics have been left cold. they just don't see the effect. i can, particularly with "diffused light" and i get why these can be difficult to understand. i personally don't see them as a great solution for someone looking for a finishing powder, because there's too much variation in pigment and shimmer from one shade to another. but i do think that if you're interested in playing around with the effects of different light, that these are remarkable. you can certainly combine them to get different looks, something i love to do. i often used "diffused light" almost in a straight line down the centre of my face and "mood light" around the outer contours, just to emphasise that "leaning into the light" effect.

i've also been having fun applying these with different brushes to see how that effects the overall look.

these may not be everyone's cup of tea, just because they're not something we're used to working into a regular makeup routine, but i do love what i've experienced of them so far; they powders are finely milled for extra softness, plenty pigmented but easy to blend and they live up to the claims they make.

you can see a look with me wearing "mood light" here.

you can see a look with me wearing "diffused light" here.

hourglass ambient lighting powders are available at sephora and directly through the hourglass web site.