March 23, 2013
hey, remember friday favourites? remember how i said it was a good thing that there were five fridays in march, because i'd need to focus on the things that cheered me? i haven't done a friday favourites since then, mostly because the horrors of march overwhelmed me and eventually destroyed my computer. so despite the preponderance of fridays, i haven't been concentrating on the bright side.

but this week, something kind of remarkable happened. not a huge thing, but a very un-march-like thing. i won something. i won a little skin care tester kit from skyn iceland and murale. i've actually been meaning to post about skyn iceland for a long time, since they've been my latest discovery and have joined korres and nuxe as the third point in my holy trinity of skin care. so for once in the month, i got a nice little surprise. i knew you had it in you, march.

have you ever thought about the parallels between zombie films and climate change?

so a police captain pepper-sprayed a mentally ill patient in the face from point blank range in contravention of departmental rules and the spray's safety instructions. and, yes, the mentally ill man was bound to a chair at the time and had a mask strapped to his face to prevent him from spitting that might have interfered with his breathing and was left like that for almost a half an hour. it's not like the captain did anything serious like, say, leak the video of the incident. those are the real criminals.

read the horrifying victim-shaming tweets and be happy you don't live in steubenville. they're here. and here. and here. but not here. those tweets are about blaming an entirely different victim.

we've already dealt with knitted lady parts, but now you can find the whole body.


"if you are going through hell, keep going."
-winston churchill


i think of that quote often during the month of march. it's a great example of churchill's wisdom and wit in equal measure. since we're already into the home stretch and we've survived march's wrath thus far, it's only a little further that we have to soldier on. [note: i must add that while it would be great to think that everything brightened up as soon as we met the april fools, in my experience, it's actually june when things really kick in. maybe it's a solstice/ equinox thing.]

speaking of june, there are at least a couple of things that we have to look forward to here in montreal already! theologian, who gave an incredible performance last year at the casa del popolo are making a return visit on june 21st.

and after a few of us conspired to start a rumour that cut hands were performing at this year's mutek festival... they've been booked for a show with the suoni per il popolo festival at casa del popolo on june 10th. so let that be a lesson to you, folks. if you really want something, lie about it and someone will eventually do it for you.

here's a little excerpt from cut hands to whet your appetite.

the most-read post this week by quite a stretch was my goodbye letter to apple. although my computer will be back in my home shortly, i don't feel good about any part of the experience. yes, i'll be able to work from my own desk and not share with dom. yes, the problem will have been fixed. but for how long? after i spoke to apple customer service on the phone- and was repeatedly put on hold while they tried to figure out a solution, only to be told that they would do nothing for me in the end- i sent a version of my blog post in writing to them through their web site customer contact centre. i'm not sure how it was handled, since they don't actually have an avenue for users to send complaints about service or product, but assuming that someone did see and and forwarded it to the correct person, i can assume that my voice has been heard. i have received no further contact from them, other than to tell me that i could pick up my computer.

i also wanted to say thank you to those of you who purchased copies of my short story collection "interference" recently. i noticed that there was a flurry of orders and while i don't know who you are, i want you to know that you are all important to me. your curiosity helps me keep writing, even when i'm in a bit of a funk.

...unfortunately, since i don't have access to my computer and all my photos, i'm not able to provide you with a new kitteh of the week. i promise, there will be more kitteh for all as soon as i'm back in the proverbial saddle.

in the meantime, here's a really adorable photo of a cat who isn't mine, just to keep you going. like churchill, she inspires me in my ongoing battle to defeat march. 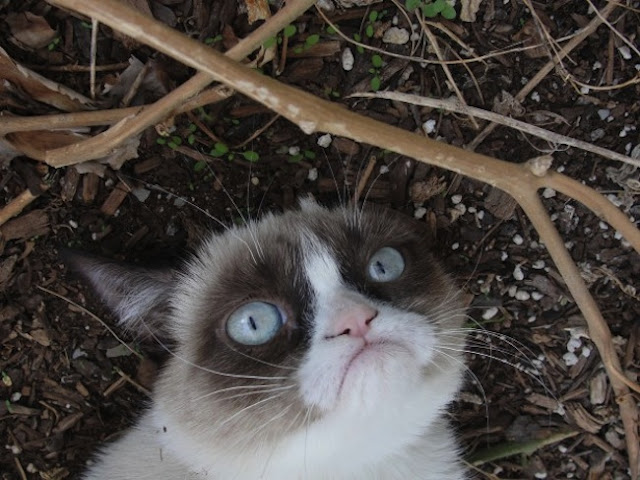 you can see more of tard and her adorable brother pokey on their web site.

this week's image of the week comes from this site on tumblr and is a veve of papa legba... gues you can chalk that up to the cut hands state of mind.

thank you very much for reading and your feedback... good news is that it's supposed to be above zero all week here in montreal and we aren't scheduled to get any more snowstorms. embrace small victories.