making faces :: not a morning person 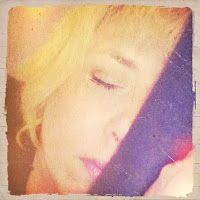 apparently, the release of chemicals that help people sleep is delayed in some people, making them go to bed later and stay asleep longer. this happens frequently in teenagers, but as we get older, the process reverses. the chemicals that tell us it's time to sleep get released earlier and cut off earlier, which is what makes people in their seventies go to bed at sundown and get up at three in the morning. but with some of us, that youthful enzyme release schedule just never seems to correct itself and we're left out of synch with the rest of the world, who have matured normally and are comfortable with a routine that sees them tuck into bed at a decent hour and rise with the birds.

what sucks if you're someone like me, whose refusal to reach adulthood apparently operates on a cellular level, is that the world requires you to act like everyone else. unless you're doing shift work, you can expect that you're going to have to get up early in the morning and trundle off to work like the people who aren't living in a state of neuro-chemical retardation. i have tried many things to make this easier and what i've found is that none of them work. therefore, i have to find ways to regulate my morning routine to ensure that i am able to get ready, but also that i don't get so tense that i end up killing people on my way to work.

it's a delicate balancing act.

over the winter, when things are dark and dreary all the time, it gets particularly difficult to motivate myself to get going in the mornings, which means that i've developed a few techniques for speeding up the morning makeup routine and, in the hopes that i can save at least some of you other non-morning people some time, i thought i'd share the results.

putting on lipstick is generally the fastest part of any makeup application, so if your look is centred on that, the rest can pretty much just fall into place. in this case, i went with rouge d'armani 604, a brilliant deep purple shade and topped it with mac's "best of breed" [limited edition release from their "fabulous felines" collection in 2010], which is a cool, sheer grey-blue. i'll be honest, while i love both of these products, i would have preferred to wear just the lipstick without the gloss, but my office was so particularly dry that week, i couldn't go without some kind of gloss, even with a forgiving formula like the rouge d'armani.

for the rest of the look, i did a quick application of guerlain's "chic pink" blush on the cheeks and benefit's "birthday suit" [light tarnished gold] on my eyelids. i did dust a darker shade in the crease to give just a little definition- the grey shade from guerlain's "calligraphy" palette and i applied mascara [korres volcanic minerals volumizing mascara, which is a lovely more-than-natural but less-than-dramatic formula]. 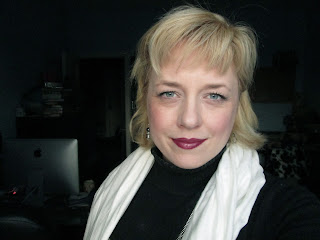 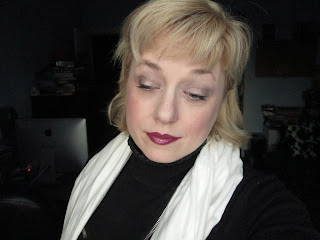 one of the things that can take time in the morning is making sure that colours are properly placed and don't look like a  big smudgy mess. however, sometimes it's appropriate to just say "it's a mess, but it's my mess" and go with it. i love some of the medium-toned armani "eyes to kill" shadows for this, because they're complex and prismatic- they don't need to interact with much else in order to look interesting. in this example, i went with "purpura", a mix of gold and royal purple that is truly dazzling. it's perhaps a little sparkly for daytime/ office wear, but the fact that i can leave it looking all smudgy and casual-like takes down the fancy factor enough to get away with it. i blended just a bit of le metier de beaute "chameleon" along the top edge to make sure the colour faded rather than ending abruptly.

on the lips, i used mac's "a different groove" a sparkly burgundy-brown gloss that was unfortunately a limited edition release. it applies very evenly and precisely, but i went ahead and messed it up on purpose, so that it went with the overall look, by lightly running a finger around the edge of my lips once i'd applied it. it's a trick that makes the lip colour look a little less dramatic and also keeps that whole "soft focus" thing going.

on the cheeks, i used mac's mineralize skinfinish in "by candlelight", which which gives exactly the diffused effect its name implies. 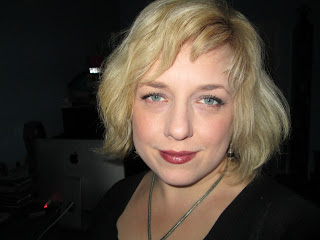 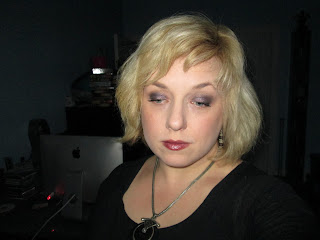 tehnique 3 :: multi-taskers are where it's at

one of the things that can take up a lot of time in the morning is actually finding the products i want in my oversized stash. this might not be a problem for others, but if you do have a lot of colours, or lack the space to organise what you do have, it helps if, when you do find something, it can fill multiple roles.

so here, i've made use of a couple of them. on the eyes and to contour my cheeks, i've used chanel's now mythical "notorious", a lavender-taupe shade that works as a lovely neutral shadow and as a perfectly natural contour, mimicking the appearance of shadows. [if you look at the second picture, below, i think that it shows that effect particularly well. note how my cheekbone seems to be wearing a push-up bra? that's what notorious does.] i added a black liner along my lower water line just to give a bit more definition and to make the whites of my eyes look brighter.

on the apples of my cheeks and my lips, i've used one of becca's cult favourite beach tints in "watermelon". it's a lovely berry red that gives a dewy breath of colour to the skin and tints my lips just a little deeper and redder than they appear naturally.

i love the beach tints on my cheeks, but i do find them a wee bit dry on the lips, so i topped mine off with hourglass extreme sheen gloss in "fortune" a stunning peachy pink, which isn't my first choice of colour, but this one really is exceptional. it's one of those shades that seems to make my whole face look better through its awesomeness. 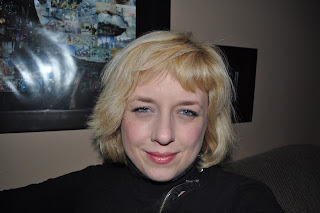 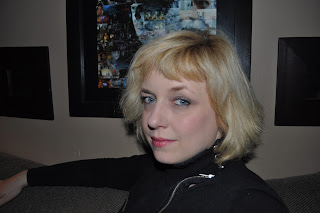 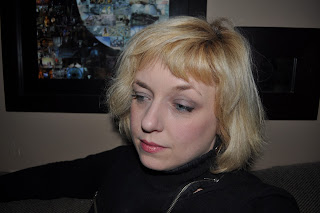 using these sort of techniques in the morning does, of course, make things go faster, but i've noticed that the net effect is that i feel more confident that i can spend more time in the morning doing what comes naturally. 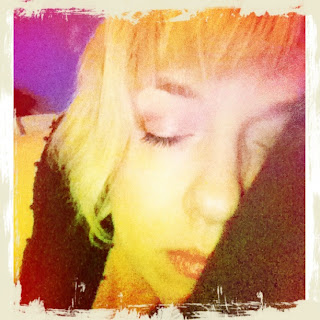 which means that i'm not doing any better at leaving the house and getting to work on time.

clearly, i've made all the effort i can and now the rest of the world must change its schedule.

Laura D.P. said…
Lately I'm not a morning person at all!! My brain becomes really active late at night (sounds strange, but If I have to do something creative I use to do it at night.. and when I was at the university I used to study after midnight O-o).. anyway my makeup routine is quite fast!
2:49 PM

morelikespace said…
I'm the same way- I get way more done at night than in the morning. This week, I've been mostly sporting simple shadow and a bold lip and that seems to have sped things up, but it doesn't make me any happier about having to get up so early.
12:26 PM