i'm going to be especially honest with you: this is most likely not the only guerlain spring 2013 collection you'll be seeing from me. i'm still trying to find the socks that guerlain blew off with their holiday collection, but what they've done for spring... the magical makeup gnomes have been very busy indeed in the house that jacques built.

one of the things that i love about this collection, aside from the fact that i'm starting to sound irritatingly repetitive as i gush over successive guerlain launches, is how they seem to have come up with a group of products that comes dangerously close to being "typical", but still has plenty of variety and gives you the little extra that a prestige brand should. what i especially love is how they've combined a couple of different sides to spring in one collection: you have greens and corals on the one hand, while on the other, you have the delicate lavender, lilac and pink shades, which is the part that we'll be dealing with today.

personally, i've always felt that light, soft purple tones are every bit as integral of spring as the ubiquitous greens. after all, those are the first real messengers- the first flowers that we see that signal the imminent arrival of warm weather and allergy season. sure, the spring is marked by the arrival of green buds, but almost before we get to see the green, we're overwhelmed with delicate purples. and that's fine with me.

on that theme, one of two limited edition "ecrin 4 couleurs" eye shadow palettes contains all the soft, floral purples that the season could require. it's called "attrape-coeur" literally "heart trap", which is actually a pretty good descriptor of its effect on me when i first saw photos of it. guerlain has a permanent shadow palette called "les violets" [the purples], but it's a little heavier, a little more dramatic and, frankly, a little less versatile than what we have here.

the first shade is not exceptionally original, it's a frosty [very frosty] white highlight that leans ever so slightly pink in certain lights. it's similar to many other highlighter shades, most notably mac's "crystal avalanche", which is just as frosty and bright, but without the slightly pinkish hue.


the colour payoff is fantastic. it's very opaque with just a light application, but it's also frosty enough that i find myself reaching for a blending brush as soon as it's on. it's not that it makes my lids look "crepe-y" or that it settles in any lines around my eyes, but it just takes very little for it to look a bit heavy on my lids. mercifully, it does blend out pretty well.

next, we have a dirty lilac-pink. it reminded me immediately of mac's "seedy pearl", which also has that slightly grimy sheen to it. neither shade swatches very well, but both seem to offer good colour payoff on the eyelid. i will say that i had to build this one up a little more than its neighbours, but because the application is so smooth, this doesn't represent a problem. applied lightly, it's not what i'd call sheer, but it's more subtle, the kind of shade that you see more when the wearer turns his or her face so that the colour catches the light.

the third shade is the brightest of the bunch, although it's not exactly neon. it's an orchid pink-purple shade with a soft periwinkle blue reflect. it's a very modern shade and it certainly put me in mind of the more exotic flowers growing in a hot house, waiting to be brought to the outside. there are two cult shades that have the same kind of effect: mac's "stars 'n' rockets", which is brighter and pinker and urban decay's "asphyxia" which is more purple/ blue. honestly, all three are stunning shades and i couldn't pick between them. guerlain's is probably the most understated, but it still gives a nice lift of colour.

finally, we have a dark amethyst purple. it's not blackened like the deeper shade of hourglass' exhibition duo, but it's definitely dark enough to stand out against the other shades in the palette. it's a true purple and looks purple on the eye- unlike a lot of darker colours that tend to look like a soft, smudgy black. it's a perfect compliment to a light, spring-toned eye, in that it gives definition and depth, but isn't overly stark.

it's a colour powerhouse, too; ultra-smooth, pigmented, long-wearing... i could go on.

mac's limited edition mega-metal shade "noir plum" is a lot more blue. mac "nocturnelle" is redder and took less shimmery. although i like both of those shades, neither came close to matching guerlain in terms of pigment and smoothness of application.

the wear time on guerlain shades without noticeable fading is generally very good and the last few days, i've been away at a business meeting and forgot to bring an eye primer. i could have rushed out to get one, of course, but i thought i'd try these out against my natural lid. i'm pleased to say that they stood up extremely well to 8+ hours of wear on their own, with minimal fading and no creasing at all. on my lids, that's remarkable.

it's a heathery pink-mauve and it's the kind of shade that i've been looking for a long time. why? because sometimes i want something that's subtle and "my lips but better" and 90% of the time, that means "my lips but warmer or lighter". my actual lip colour is cooler and quite mauve, whereas most natural shades look warm. this one is a really nice complement, blends in well with either a natural look or a smoky eye [or with the shades from attrape-coeur].

the one flaw the shade has is that it's really not long-lasting. soft shades generally aren't, but the sheerer formula of this one causes it to disappear generally within two to three hours, even under good conditions [normal humidity levels and lips in good shape]. for a luxury product, it's a bit on the short side, even when compared to similar shades. [nars "mayflower", for instance, lasts longer on me and has a similar level of opacity.]


i did not find the shimmer in this shade as pronounced as in "lou-ling" from the holiday collection [the only other rouge automatique shine i've bought], but it's definitely there, giving the lips a little added oomph [and making them appear a little fuller].

rouge d'armani 605 is somewhat similar, but more opaque and warmer. i find that the shade looks pinker in my swatch photos than it does in real life. the photos below, where you can see it on my lips, are more accurate to my eye.


these photos feature both the reviewed products- as you can probably tell just by glancing at them. they do work extremely well together and are a perfect pairing for spring [or, appropriately enough, for valentine's day]. here's a complete list of what was used. 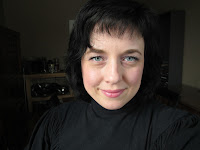 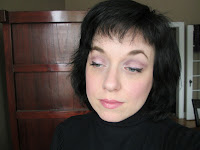 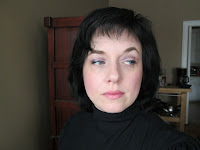 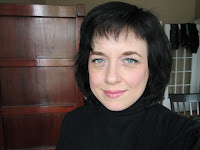 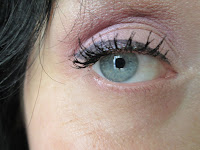 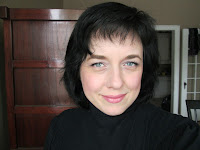