January 20, 2013
days when i don't have much to do except laundry and cooking are often days when i give my skin a well-deserved break, but they're also days when i sometimes like to experiment with colours or techniques knowing i won't likely scare anyone except dom and the fur-kids. today was one of those days when i felt like trying something different and, not knowing where to start, i asked dom to name a colour or think of a word or something to inspire me.

so, in keeping with what i saw he was watching, i figured i'd go with a little chocolate and caramel on the eyes, a dusting of icing sugar over my face and a nice maraschino cherry lip to finish things off.

the caramel eye comes courtesy of mac's "redhead" fluidline, which is actually intended for eyebrows [and which i used there too], but which makes an excellent cream shadow. it's a soft, warm butterscotch brown that really, really works wonderfully with blue eyes. on my brows, i went just a touch too heavily, something that i have to avoid since the shade is warmer than my natural colour and can look "layered on". when i've applied it properly, it's a fantastic product to give my brows the little bit of maintenance they need. [i'll be honest: most of the time i do absolutely nothing with my brows. i'm lucky if i remember to pluck them.] 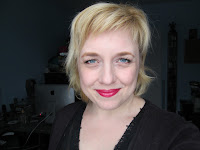 "redhead" is featured in the mac collection "the stylish brow", which is exactly what it sounds like- a group of products for perfecting and maintaining elegant eyebrows. although it's definitely not getting the hype of their colour collections, being a mix of new and permanent products all intended for subtle work, this is the sort of thing that absolutely warrants attention. mac have a real talent for solid basics and this is one of them.

in the crease, i added a darker, milk chocolate brown shade, a limited edition shade from mac called "mulled cider". it's a bit darker and less warm than "handwritten", but you could probably substitute that one. personally, i think it's strange that this isn't part of mac's permanent collection, because it's such a smooth, perfect neutral shade for use on virtually anyone. when i want "just brown"- a plainspoken, medium-deep brown neither warm nor cool [ok, a little warm, but still pretty even], this is what i reach for. sadly, it's not been available since its initial release in january 2010. 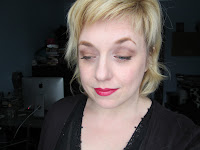 i highlighted along the brown bone with urban decay's "virgin" and lined my upper lash line with stila's "lionfish", a deep brown with a cinnamon bronze shimmer that catches the light nicely. since i find that the warmth of that liner looks a little less attractive below my eyes, i used the dark cocoa shade from the sephora + pantone universe eye liner set. finish off with a sweep of mascara [yves st. laurent's effet faux cils, which really doesn't fit the theme, but does go with the look] and the eyes are done.

aside from my regular combination of dior's hydrating concealer and urban decay's naked skin foundation, i used a new product from bobbi brown to give myself that all-over "icing sugar" look. "porcelain pearl" is new with bobbi's early spring collection called "brighten, sprakle and glow" [there is another, more colourful collection coming soon] and, as far as i know, it's limited edition. it's described as a "brightening finishing powder", which is an extremely accurate description of how it works. it's a powder made up of cooler-toned pastel shades with a finish between a satin and a matte and one white shade with a pearly finish.

the colours feel very dry and stiff when you try to swatch them on their own, but work fine in application. it's a powder that's meant to be swirled together and dusted all over to give skin a livelier, brighter, fresher look. the colours used are similar to the mac mineralize product "lightscapade", but the finish is a lot more subtle. i find this makes it more versatile, since it won't look as pronounced on skin during the day. 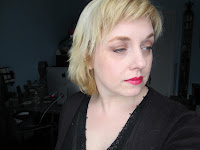 one thing that i did notice was that it can kick up a bit of powder if you use a dense brush and can end up making your face look a bit powdery as well. i've had the best luck with something like a mac 187 brush, which gives light but noticeable coverage. it's definitely something you want to use as the finish touch; applied as a highlighter, the more matte finish can seem a bit caky unless you're very careful how you apply. one alternate use that i do like is to dab just a little of the pearly white shade on the inner corners of my eyes [i did that here] for a more wide-awake look.

to avoid looking too ghostly, i used a bit of a subtle blush on my cheeks- mac "darkly, my dear", which came out with the "venmous villains" collection in 2010. it's a muted brownish plum that serves as both a contour and a highlighter. it's like a deeper version of the permanent shade "blushbaby". 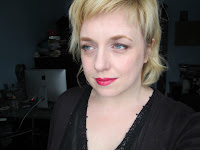 lastly, the cherry on this sunday was, of course, a bright, shiny pink-red lip. i went with another product from mac's "venomous villains" for this one [in fact, another product from the "cruella deville" segment], a gloss called "wicked ways". this one is just such a fantastic, bright, intense colour and it really does remind me of those eerie glow-in-the-dark cherries that routinely adorn desserts. sadly, it's no longer available and the closest colours i can think of- mac "utter fun" lipstick nars "strawberry fields" gloss- were limited edition as well. i can't imagine that there isn't someone willing to make a bright, juicy maraschino shade out there! 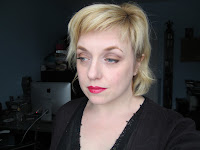 so that's my sunday sundae. and yes, dom liked it. i suppose that if one wanted to nitpick, it could be pointed out that if the point of this was to make me come up with something different to try, it's a failure on that front, because the neutral eye + berry lip combination is something that i do at least once a week in some form, but hey, i've never done it this exact way before. and i've never been made ravenously hungry by the act of putting on makeup before.

besides, if dom had been watching a show about cooking steaks or spinach quiche, i have a feeling this wouldn't have looked so great.

April 21, 2013
i like to think we've turned a meteorological corner. although i have to admit that there were little white pellets swirling around my head when i went to the grocery store yesterday, this week looks like it's going to be the first one where we have double-digit temperatures every day. they aren't tremendously high temperatures, but they are ten degrees or above, so it counts. it's the 21st of april and i think it's just possible that we are edging into spring. welcome to montreal, folks.

so in honour of that momentous event, because there's nothing more spring-appropriate than bunnies [except possibly chicks, like the ones you're counting before they've hatched, weather-wise -ed.], i have a few rouge bunny rouge goodies to share with you. in fact, i have a lot of bunny goodness to share with you, so i'll have to split it between posts. bunnies are like that, especially in the spring... their numbers suddenly increase when you're not looking.