January 15, 2013
as you might have read already on these pages, i started the new year off with a nasty bout of the flu. of course, my never-ceasing luck meant that i got sick on a friday night and stayed pretty unwell through to sunday evening, at which point i started to feel a little better. just in time to get up and go to work. i suppose that i could have taken a sick day, but i felt that it wasn't going to kill me to get up and go to work, whereas there are mornings- mostly when i have a migraine- when i believe it would possibly kill me and almost definitely other people if i were to get up and go to work. so i think it's better for all concerned that i reserve my sick days for those occasions.

now that doesn't mean that i felt good monday morning. it means exactly what i said- that i wasn't in imminent danger of dying- and nothing more. i looked like... well i looked like a person who'd been fighting the stomach flu for a couple of days and losing. and since i felt like i at least had to do a decent impression of a human being, i had to come up with something to do to my face that would allow me to pass as one.

the rules for this were clear, as they would be to any marginally sick person trying to return to the office before their inbox implodes and becomes a black hole.

1. i wasn't too coordinated, so anything complicated was likely to involve me embedded a brush in my ear or applying dark lipstick around my nose.

2. the point was to make it so that i didn't look the way i felt, which was bloody awful. 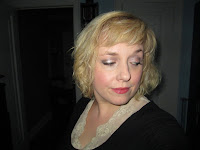 i figured that the easiest way to combine these was to use products that would add a little colour and brighten my overall complexion and that allowed me to do at least part of the job with my fingers, which are less likely than brushes to get embedded in my ear.

i started out by placing chanel's "complice" all over my lids. i love this colour as something that brightens without looking overly frosty [looks frostier in flash pics, which is why i included the slightly out-of-focus natural light pics to give a better idea of how it looked in person]. it added some brightness where i needed it.


of course, my eyes were also kind of puffy, so to give a bit more depth, i also added two mac shadows- "swell baby" [substitute scene, applied very lightly] and "smoke & diamonds" [substitute satin taupe]. neither of these was dark enough to look heavy, but they gave some shape and definition where it was lacking. they also offered a bit of contrast to the lightness of "complice". 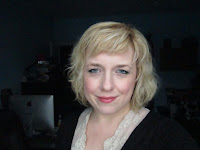 to finish up on the eyes, i very lightly smudged a random grey sephora home brand eye pencil [terrible quality- part of a mini set i picked up and nowhere near as good as the pantone universe set] into my upper lashes and applied a sharp line of urban decay's "perversion" along my lower water line. the point of using a very black liner was that it made the whites of my eyes appear brighter in proximity. i left the line unblended to give that contrast maximum impact, but also to avoid anything that might look heavy and emphasise the considerable baggage i was carrying in my under-eye area. and, being conscious of avoiding heaviness, i also opted for a more natural looking mascara than i wear most days- korres volcanic minerals volumizing mascara. this doesn't add the level of drama as some of my perennial favourites [ysl effet faux cils and givenchy noir couture], but it gives a lovely dark fringe that looks soft and full. 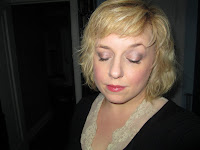 obviously, my skin wasn't looking its best on this day and my complexion had shifted from pale to patchy and kind of grey. not a good look for anyone. while i thought of going with a lighter "glow-y" foundation, i opted for clarins everlasting 103, which is more matte, but offers a little more coverage. i was not starting from a good position, which meant that i was aiming to hide what was there rather than apply perfecting touches. clarins is a good formula, but it is a tad thick and can look a bit heavy when applied. to combat this, i actually mix it with a dab of gosh's anti-aging velvet touch foundation primer. this gives a nice, even application with medium coverage. if you want really full coverage, use the foundation on its own or over a primer. under my eyes, i used my usual dior hydrating concealer, augmented with a little touch of lush's "jackie oates", which is brighter overall. 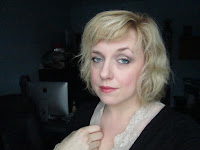 for a bit of colour, i applied becca's beach tint in "watermelon". this was my first experience using the cult favourite beach tints and i used it, as suggested, both on my cheeks and lips. "watermelon" unfortunately smells like its namesake, which was almost the end of my day right there. i hate the scent of watermelon with a rare passion. fortunately, the smell dissipates pretty quickly.

the shade is a bright reddish pink- exactly what you'd expect from "watermelon"- and carries a lot of pigment. i had to do some buffing on my cheeks after application and i still had a lot of colour, but i found it looked very fresh and the finish was just beautiful and slightly dewy, for that perfect, wind-kissed [but not wind-burnt] look. on the lips, i applied a couple of layers as the pigment- which you might expect- was less evident. i found the product felt dry- although not really drying- used as a lip product, so i topped it off with a few dabs of chanel's glossimer in "intrigue". i think the combo actually made for a really nice, fresh spring lip shade- very juicy-looking. the beach tint is an exceptionally good blush- it lasted beyond eight hours on my cheeks- and a decent lip product. i don't know if i could see wearing it without a gloss over it, though.for days when clumsiness is more of a factor, it is nice to have something on hand that can be applied with the fingers. it is very smooth and the colour never looked uneven, which makes it kind of idiot-proof. 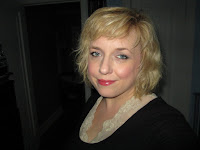 to finish off, i dusted the lighter portions of edward bess "south of france" over my cheeks, above my brows, everywhere i thought could use a little more light. i love the fact that this never looks powdery on me and that it can function as a soft highlighter, blush or both.

i don't think i managed to completely disguise the malaise i felt, but at least no one commented "you look exhausted" which is what i usually get if i don't make an effort. i think it also helped just going through the process of getting myself ready for the day, since i used the time to mentally get myself ready as well.

i'm hoping i don't have to do this sort of look again, because i don't want to be sick again [shocking, i know], but just in case, please feel free to leave further tips for disguising the flu or other ailment, please feel free.

oh, and let me leave you with this one little piece of advice: even if you don't look like you have the flu, you are still sick and you may well still be contagious. it seems like i did such a good job of passing for a recovered person that others didn't feel the need to avoid me and scream "unclean" at me. although they definitely should have. so i ended up giving my boss a nice bout of the stomach flu as a new year's gift. she hasn't thanked me yet.