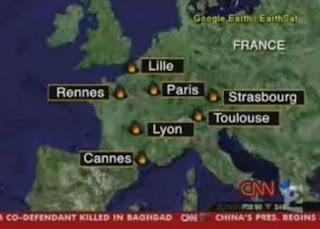 i'll admit, i get into cnn during election coverage. more particularly, i got into their coverage of the republican nomination contest, because they just have all the coolest gadgets and so many of the people covering the primaries were so obviously geeking out on the mechanisms of politics involved that it made me feel a little less geeky by comparison. [not a lot less.]

but as things moved away from coverage of the republicans only, i started to notice that the station wasn't nearly so enjoyable. i hadn't watched much of the station in a very long time, so somehow i'd missed the tipping point in their ratings freefall when they decided that to compete with fox news, they had to become fox news. with cooler gadgets.

i remember cnn being around in the 80s. i remember suffering through untold hours of pat buchanan on "crossfire", which almost certainly did some permanent damage. i also remember the real blooming of cnn during the first iraq war- which i opposed, along with about ten other people- the airing of atari weapons screens, the reporters in the war zone, hearing the name "wolf blitzer" for the first time. and yes, from that time, cnn became kind of a pompous joke, more concerned with making a story of themselves and their coverage of news events that often had precious little "newsiness" about them. remember weeks on end of o.j. coverage? the william kennedy smith trial where the victim was a floating blue dot? somehow, they'd replaced news with "infotainment". [i'd like to take this moment to point out that blogger's spellcheck accepts the word "infotainment".]

then fox news came along and watered things down even further. why stop at making real events more entertaining when you can actually shape reality to your own opinions through a clever combination of yelling and making shit up? and yes, it worked. and for years, cnn resisted, denying that real events were simplistic and one-sided and clinging tenaciously to the belief that they were simplistic and two-sided. 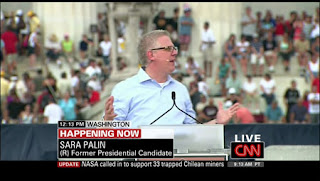 but somewhere, cnn decided that what was really important was giving the pretense of being even-handed, while actually listing ever farther to the right. rather than entertaining the possibility that perhaps they should try to look outside their country's narrow political dichotomy for analysis and try to bring in opinions and facts from outside the position papers of republicans and democrats, they figured that their path to success lay in simply allowing voices from one side to gradually drown out the other.

watching tonight for longer than i normally do, i believe that i did a serious ab workout as i cringed through erin burnett's pathetic kowtowing to a tea party senator about hilary clinton's benghazi testimony without ever questioning a point he put forward, followed by a "make your own science" section on whether people should bother believing in climate change when it's cold outside- a segment which ended with her trying to beg extra time from her producers so that right-wing blogger eric ericsson could get the final word in.

of course, that's not surprising from burnett, who started off her cnn career squeaking the word "seriously????" repeatedly at occupy protestors. [i believe the title of her segment was "wah! stop complaining about my fiance's line of work!"] what was more surprising was seeing bespectacled veteran blitzer [whose name now seems so familiar it's difficult to remember we ever found it odd] practically begging the brother of one of the four americans killed in the benghazi attack to blame hilary clinton for his brother's death and basically have a meltdown on national tv.

what's truly appalling, however, is that a network supposedly dedicated to bringing the news to america somehow ended up spending almost half its primetime hours discussing the imaginary girlfriend of a college football player and whether or not a popular r'n'b singer was lip-syncing at the inauguration. because, evidently, there was nothing else happening anywhere on earth that warranted reporting. 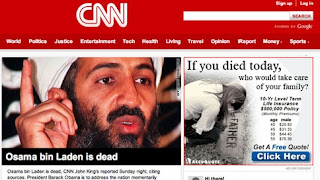 last night, my girl crush rachel maddow had an admittedly biased but very well-researched piece on republican-dominated state governments who are rushing to redraw district lines to limit the possibility of democratic gains within state governments and proposing changes to the way those states [all of which voted for obama in 2012 despite their republican state governments] allocate their electoral college votes. if true and if allowed to pass, those changes will fundamentally alter the way in which governments and presidents are chosen, perhaps for a very long time, which would make probably the most important story in american politics as far as the citizens of the country are concerned. why isn't cnn informing us about that?

in fact, msnbc, with far less funding and almost no cool gadgets, routinely outshine their more staid cousin by offering what i like to call "fox news for the thinking set". they're unashamedly slanted towards the democrats, but they're also very entertaining to watch. their mix of primetime personalities [both the hosts and their regular guests] is entertaining and they've proven incredibly adept at incorporating social media. their hosts tweet regularly [although, to be fair, cnn's remaining crown jewel anderson cooper and british provocateur piers morgan have proven masters of that medium as well] and they are active with other journalists and media within social media, which is a fantastic way of circulating stories that larger media might miss- the atlantic, mother jones, politco, huffington post and others are all part of the network msnbc uses to capture content that people are actually discussing. 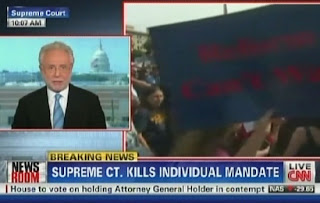 from another angle, al-jazeera, who have recently announced their entry into the american marketplace through the purchase of al gore's current tv, have gracefully risen to the apex of the journalism pyramid. for thoughtful, even-handed, in-depth reporting from all parts of the world, there is simply no one better. [i have actually found out about at least half a dozen canadian news stories through them, which says something about the sad state of canadian media, but that's another rant.] they don't rely on pop stories [although they'll air them occasionally, in the clearly distinguished entertainment section of their broadcasts] or on-air screaming matches to sell what they do. they just provide an excellent source of news for people who are increasingly starved for one. they don't even have gadgets to speak of.

for fox news nailing down the increasingly loud but dwindling right, msnbc consolidating liberals and al-jazeera stepping in to provide a forum for thoughtful, more in-depth journalism, cnn's place in the sphere they invented looks increasingly uncertain. the only thing that is certain? whatever they're supposed to be offering, they're not offering it. they have some talent [the aforementioned anderson cooper, plucky morning host soledad o'brien and others], but a decided lack of direction. and until that, they're going to continue to languish near the bottom of the news network ratings and the top of my "things that make me angry" rants. because, really, the gadgets are only cool for so long.