November 02, 2012
happy all souls day! this is the lesser known holiday that follows all saints day in catholic practice, where you're supposed to pray for those relatives and friends who might not have slipped through the pearly gates with a last minute repentance. i don't actually know of any who need my prayers and, since i'm not one of the faithful, i think that my prayers would likely do more harm than good.

there was probably another thought to go with that, but i got distracted by the fact that dom suddenly said "oh, you're blogging" and put on a large pair of headphones. all i can assume is that i blog really loudly. which sort of comes as a surprise, since i was reasonably certain that i was sitting here, quietly typing and not saying anything at all.

clearly, i need some new medication.

in my delirious state, these are some of the things that made my week a little better...

ever think that the term "pro-life" should be used to describe people who are actually concerned about the preserving lives?

you know how obama's been saying that he's fighting for american jobs while romney's been outsourcing them to china? he really wasn't kidding.

dear austria :: thank you for helping to disprove that idea we had that europeans are more rational and intelligent than north americans.

what's more appropriate to the season?

wait a minute- something's missing from this week's friday favourites... yes, i have abandoned the "goings on" section, but only temporarily. i've actually been thinking about this for a while and i'm hoping to have it as its own separate weekly feature, since too often, i miss the opportunity to share things happening on fridays, among other reasons. so, yes, i'm doing a slight reformat of "friday favourites", but everything's cool.

of course, that won't stop me from using this section to tell you that this week sees the return of "the caustic lounge" to cagibi [corner st. laurent and st. viateur] for our monthly night of offbeat tunes from all over the map. it'll be taking place this wednesday, november 7th, from 9 until midnight and it will mark either the great international day of exhaling [four more years] or the dark hour of trepidation [you ate the septic tank, america]. either way, it's going to be an evening to remember. which means that most of us probably won't be able to remember it.

interestingly, my "dear america" letter was one of the most read posts on more like space this week, second only to my halloween face post. so i guess i can draw from this that readers of this blog like to be scared. i'll keep that in mind.

why settle for just one? here's 75% of the household kitteh! 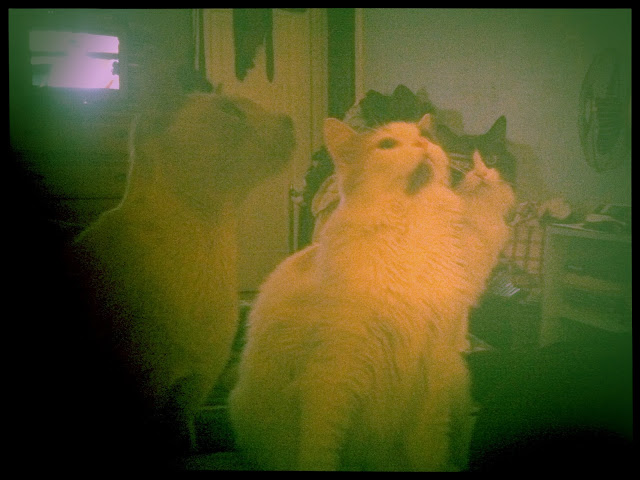 i really do need to find a way to get them all to pose together.

this week's image of the week is a picture i snagged from wikipedia. it shows candles lit in a swedish graveyard to commemorate all souls day. because apparently the swedish like to honour their unsaved dead by lighting fires. i guess to make their dead relatives believe that they'd be on fire even if they weren't in hell. it's kind of thoughtful, if you think about it.