making faces :: class is always in fashion with coco 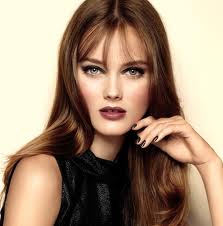 ah, the allure of the chanel woman. it's not merely about beauty- although that always helps- but about the combination of elegance and independence that has become associated with the fashion house's larger-than-life founder. filtered through the marketing hive mind for fall 2012, that equates to a cosmetic collection that is seasonally appropriate without the sultry drama of a lot of autumnal offerings. cool and muted, it might almost seem a little too soft, if it weren't guided by the deft hand of chanel.

the fall collection has been out since roughly january in the united states as far as i can tell. chanel are probably the earliest to market of anyone, which may mean that they capture some early sales, but it also means that by the time the season rolls around, the offering can seem a bit like old news. fortunately in canada, they seem to have some level of respect for the seasons, so we've only started to see autumn 2012 in the last few weeks.

there's a nice sampling of products- a half dozen individual eye shadows plus a new quad, all of which become part of the permanent assortment [a couple of them already were], new lipsticks and glosses in a variety of formulas, some of which will become permanent, a new permanent blush, a limited edition highlighter and, of course, three new [and, i believe permanent] nail polishes. i'd say the colour palette leans a little cool, but mostly it's just very refined and ladylike, very daytime and office appropriate.

the problem for me was figuring out how to stretch my budget to get what i want [which i still didn't, since my counter was sold out of the beautiful "rose initiale" blush] and not end up on the street with a sign.
i opted to start out by trying one of the new single shadows, because the formula on the new shades seems different than the other chanel shades i have. i picked out soft neutral-peach "complice", although i was also tempted by lemon chiffon "eclaire" and blue-grey "furtif". i figured that if it was new, i should try one out rather than going bananas and buying as many as i could fit in my purse. that's really as responsible as i'm capable of being when chanel is involved.

the finish is indeed quite different than any other chanel shadows i have. in fact, it's different than any shadow i've ever come in contact with. it's iridescent- not shimmery, because there is no base versus sparkle colour- every particle seems luminous. the texture is exceptionally soft and all the shades seemed to swatch very smoothly and evenly. in the pan, they don't appear to be particularly unique- and "complice" may be the least unique among them- but the finish really does make a huge difference.

i've had the chance to test drive the colour a couple of times and i find that it wears differently than other eye shadows as well. wearing for a day at the office, otherwise known as the eye shadow "trial by fire" [my office has mysterious powers to destroy even the most carefully set makeup], i noticed that it had a tendency to crease. that didn't surprise me- soft shimmery shades are prone to this. while the colour faded a little, i found that the iridescence persisted, so that it never looked particularly faded.

worn in the "real world"- around the house and outside for seven or eight hours- i actually found that the colour didn't crease at all and faded less. my guess would be that the oilier your lids are, the more you run the risk of encountering the negative aspects of the shadow. i wouldn't recommend "complice" or its friends without some kind of primer.

colour-wise, it's not that difficult to find shimmery peach shades. urban decay "sin" is fairly close, but it's lighter and pinker. the lighter half of "sable emouvante" is deeper, warmer, more orange. chanel "beige lamé" is deeper and browner, plus it has a definite sparkle finish [white and blue!]. none of those colours have the intense lustre of "complice" though.

i also picked up "caractere" rouge coco, a brown-plum lipstick with a dusting of gold and copper shimmer inside. to me, this is the sort of shade that explains why people buy high end cosmetics to begin with. from the first application, it's plain that the colour has a depth and a sophistication that more uniform shades just don't possess. it looks brown in the tube, but a lot of pinky/ plum comes out on application, plus the shimmer really catches the light and never ends up wandering all over your face.

most people seem to find the rouge coco formula neutral to drying, whereas they find the about-to-be-relaunched rouge allure formula mositurising. i find that rouge allures dry my lips and the rouge cocos are neutral to moist. this one felt a little more moist than others and was just short of opaque. it really seemed to smooth my lips and make them look a touch fuller [they don't claim to do this, but when you get a rich formula and even application, many lipsticks actually accomplish this anyway].

it is perhaps a sign that theses sort of purple-plum tinged variations on brown are enjoying a wave of popularity that the first shade "caractere" called to mind was nars "vendanges", released just this summer. they aren't the same- "vendanges" is sheerer, deeper and browner- but they are from the same hood. chanel's "baroque", which is the brown to which all other browns are compared, is redder and darker. mac's limited edition shade "riveting"- an overlooked gem- is much cooler.

i firmly believe that i'll be making a return trip to the chanel counter, because there are definitely items from this collection that haunt my dreams [although last night i dreamed about dragons, not cosmetics]. i'm happy enough with the formula of the new shadows that i want to try more and there are some other soft lip shades i could see becoming favourites in my facial wardrobe.

the collection is achingly sophisticated and while it might seem quite tame for a season that normally sees blackened lips and smoky eyes, it's filled with the sort of things that you're likely to use very frequently. it's like all the advice you get about fashion: investing in the real quality pieces that you will wear again and again. i'm more a kind of "invest a bit in everything until you run out of money" sort of person, but if you're going to go classy, it makes sense to go chanel.

here's a look at the two products i picked up on me. i love the look of complice with greys. i tried it with mac's "silver ring" the day i wore it to the office" and then decided that it would look even better with the hourglass "prism" duo. honestly, it worked both ways. hourglass is a little more dramatic, although it's not exactly going to stop traffic.

i used guerlain's limited "blush g", although i really wanted it to be "rose initiale". the two are somewhat similar, although chanel's is softer and a little more pink, less coral. again, they're from the same hood.

although i don't review either of them here, there are two "extrait de gloss"- one a warm, shimmery pink and one a gloss version of "caractere", but a little less purple that, along with the seasonal highlight powder are the only things i'm sure are limited edition. all of the new shadows become permanent, as does the stately neutral quad, "rose initiale" blush [although that launch-time wave of excitement may mean it's sold out for a while at certain counters], "caractere" and the lovely neutral glossimer "sweet beige" [which originally made a successful debut with last year's holiday collection].

and keep an eye on local counters, because chanel as been dribbling new things for a while, just being a little unpredictable about where they'll show up. the next thing to launch is their reformulated rouge allure lipsticks, which will come in more than a dozen colours, including a nice-looking selection of chanel reds.

[æʃliː sowlis] said…
I have no idea why your view tracker thing thinks I'm on the Big Island. That's like three islands over! XD

Sorry for the non-sequitur, I'm sick and really really tired.
12:57 AM

slightly eerie, but i guess you know where i live anyway!

those colours suit you really well...actually i love how the whole ensemble is working together, haircolour, makeup, top...

And seriously, this entire blog is one giant non-sequitur, so never apologise for that.

@anahdara- Thanks, I'm really enjoying what I picked up and I did manage to grab the blush, which is beautiful.
6:27 PM