June 16, 2012
a little late posting because of one of the events i posted about in last week's friday favourites- last night i went to see the lethe performance at a former foundry in old montreal. discussing the show afterwards, i said that the sound was more or less as i'd expected it to be and it struck me that that means i had an idea what metal plates suspended over candles and "played" with blocks of dry ice should sound like. it was one of those moments where i realised how far afield from the mainstream i'd slipped without noticing.

i had an idea that i'd come home and write up my friday favourites before going to bed, but clearly that didn't happen, mostly because i felt so braindead at the end of a long day that the entire text would have read something like "i like stuff. this stuff i like. my stuff, here it is." i'm not saying i'm that much better off now, but i'm writing in sentences, which is always a bonus.

at any rate, here are some things i wanted to share. my stuff, here is for you...


want to pamper the girl in your life? how about the hello kitty spa?

possibly the worst anatomy lesson ever.

gentlemen: aside from all the moral reasons for not abusing your wife or partner, you may want to consider that it could soon be legal in canada for her to hire a hit man to kill you.

does your brain have a gut feeling?

goings on :: stuff you can [and should] attend


if you're in montreal... new york's theologian, who some might remember as the force behind navicon torture technologies, will be playing this thursday at the casa del popolo, along with this quiet army, aun, s/v/r and northumbria. it's part of montreal's suoni per il popolo festival and you can find details here.

and the night after, wierd records artist led er est will be in town to play a show at... an undisclosed location. wtf is up with that?!?!? your best bet is to check the band's facebook page for updates. local act dekoder will be opening. if possible, i'll post more information as i get it.

if you're in mexico city... a "sexadelic noise party" sounds like a pretty awesome way to spend your time, no? details on facebook [in spanish]


i saw this video linked on metafilter. don't know much about the band, but both the music and the imagery are sort of guaranteed to stick with you. perhaps not in a way you'll like.


well, if you checked out my euro bracket, you'd know that my record has been decidedly mixed. i still favour germany to win the whole she-bang, but i must say i'm backing off the notion that they'll do so by defeating the netherlands. apparently, the dutch national team have other things they'd like to be doing. they were the last team to score a goal and they still haven't managed to put a point on the big board. as the tourney winds up this week, i'd really love to see ireland pull off an upset against italy. i'm not predicting it will happen, of course, but it would be sort of brilliant.

it's funny, because this week, almost every post got close to the same number of views, which is nice, since it implies that people are coming back to read all the stuff here, rather than just a piece here and there. thank you very much for your support! the most popular post was "quick change", which i take to mean that other women struggle to find time to change their day face into a night out face. just behind that was last week's "mental health mondays" and, yes, i do believe that this has been resurrected going forward.

"more like space radio" will be posted by monday as well, so stay tuned for that. thinking of going for a somewhat creepy edge this time...


i swear seth practices being adorable when we're not looking. no way this comes naturally... 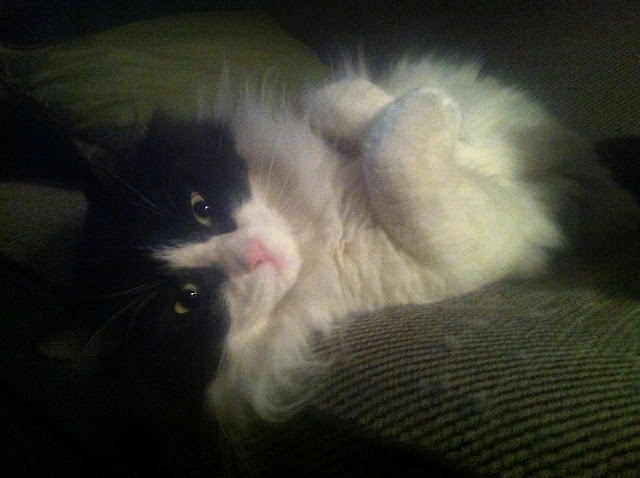 have a great weekend and thanks for reading!

anahdara said…
might go check out those music suggestions next week...thanks for the tip!!!
11:15 AM