there are much worse things...

last week, i noted that the stm had apparently split space and time and while i think i've figured that out, i have also come to the disturbing realization that montreal's transit authority is probably trying to kill you.

well, maybe not you. and not me, at the moment, but what's to say they're not targeting us all, area by area.

the testing ground is a business park in ville st. laurent. i pass it in the mornings going to work. since there are no pedestrian over- or underpasses, i wondered what the procedure was for getting people home at the end of the day. after all, without a strategy for moving them in the opposite direction, it's kind of a tease having a spiffy new bus to take them to their jobs in the morning. it's like "screw you, plebes! you have to live here now!"

curious, i checked out the instructions on line only to discover to my horror that one of the first steps you're supposed to take is to cross the street.

look at the picture below. can you imagine how much fun it would be to cross that every day? i think the median fence would be especially awesome in winter.

what's truly scary is that there aren't any other routes. i mean, even if it's way longer, wouldn't it have been nice to include an option for those who don't fancy an evening commute that feels like a training program for seal team 6? no?

the good news is, this really only applies to a small number of workers. the bad news is, it's probably only a matter of time before the stm comes for the rest of us. be nice to your bus drivers, folks. they may hold more power over your life than you suspect. 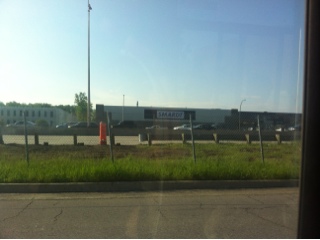